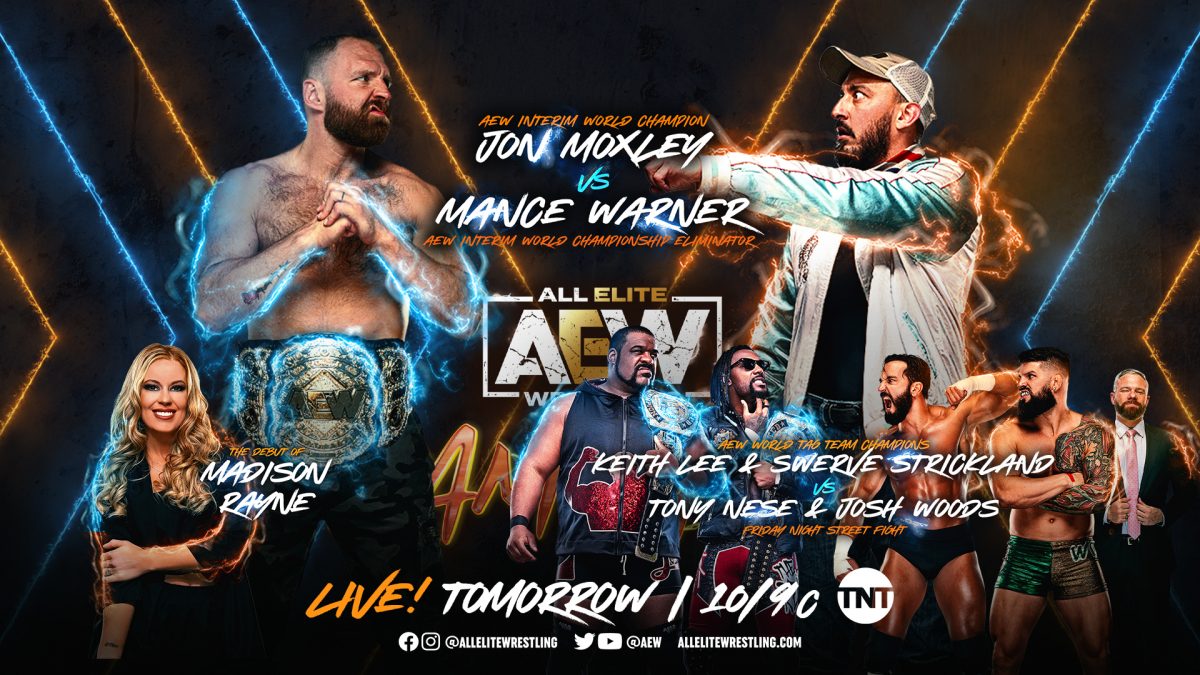 The #AEW Interim World Champion Jon Moxley puts Mance Warner to sleep to get the victory LIVE on #AEWRampage on TNT! pic.twitter.com/Ayo7XNBSXL

We get a quick video promo from Mance Warner to introduce him to us as a fighter who doesn’t wrestle, he fights!

He calls for Mox to meet him on the ramp and Mox meets him there for them to brawl to the ring. Mox rolls into the match and then rolls out, and Mance follows him. They keep brawling, and Mox hits a snap suplex onto a steel chair. They make sure to film around a guy with a “Vince stole company $: sign.

They brawl back into the ring and fight in the corner. They trade chops and go to different corners. MOx drop kicks Mance’s leg in the ropes, hits a Dragos Screw and a fight four. Mance gets out of it with an eye poke and then they go back to throwing hands in the corner. Mox rolls outside again and Mance follows, tossing Mox into the steel steps.

Mance then suplexes Mox into a steel chair. Mox is tossed back in and Mance follows. MOx is able to stop a figure four attempt and kicks Mance a series of times and they go outside again. Mox pulls Mance into the steel steps MOx tries to hit a Paradigm shift, but Mance is able to escape and hit the DDT on the steel steps as we go picture in picture.

When they return to full screen, they are in the ring and Mance hits a chop block on Mox. He then stomps on Mox’s injured leg. He goes for a cover and only gets a one count. Mox is able to get up and hits with chops, but Mance is able to retaliate with a spine buster and a pair of two counts. Mox motions Mance to come on and flips him the double bird. Mance stomps him and then goes under the ring for a pair of chairs. Mox punches the chair out of Mance’s hands, and Mance rolls to the floor.

Mance is busted open and Mox leaps onto him on the floor and tosses him into the ring. Mox gets a lariat in the corner and pulls Mance up to the top. He hits a super plex and then starts in the Hammer and Anvil elbows, but his right hand is hurt and has to switch to the left. As they get up, Mance hits a clothesline. Both men are down and ref counts.

Mox covers for two and then gets a double wrist lock. He then moves to the stomps, a pile driver and Mox goes back to the stomps. MOx pulls him up for a rear naked choke, and Mance passes out.

QT Marshall and the Factory made an offer to Ricky Starks, that he did refuse.

We go to an interview where Ricky Starks is offered protection by QT Marshall and the Factory. He tells them he doesn’t need the help and walks off, but QT says they will get him.

Ryan is in the ring as Takeshita runs to the ring and the only attack Ryan gets is after Peter Avalon grabs his foot. Takeshita hits a Blue Thunder Bomb and then a driving knee and a three count.

Peter Avalon tries to attack, and Takeshita takes him out with the driving knee.

The Best Friends are at their best… together.

We have a backstage interview with Orange Cassidy and the Best Friends. Chuck Taylor says they aren’t doing great so they need to make a change. They then say they are best as a trio and asks them to put their hands in, and Danhausen puts his hand in as well.

Madison Rayne picks up the victory in her #AEW debut! It’s #AEWRampage LIVE on TNT! pic.twitter.com/p6bGcDbPgt

They lock up collar and elbow and Grey is able to put Rayne in the corner, she chops on the break and Rayne goes for a leg, and Grey goes to the ropes for a break. They trade waistlocks. They run the ropes and Rayne is able to get an arms bar into a bridge for a two. She then gets a back slide for a two count. She then gets an arm drag and holds it. Grey works to her feet and then go to the corner and Grey kicks on the break.

They fight to the corner and as Grey is able to escape, Stokely gets on the steel steps and throws a fit to distract Rayne. It works and Grey knocks her to the floor and we go picture in picture.

When we return to full screen, Rayne is in charge and gets a bridging suplex for a two count. They get up and Rayne runs off the ropes and Grey hits a sit down slam and stalls for a two count by preening to the cameras. They get to their feet and throw hands. Grey tries for a face buster and Rayne blocks it and hits the Cross Rayne for the three.

Jade Cargill comes out and says it’s hard to find good help and challenges Rayne to a match on Wednesday. Kiera Hogan tries to attack and Rayne is able to block it and hits a Cross Raynes on Hogan.

We are LIVE on TNT with #AEWRampage right now! pic.twitter.com/OZF2M0sEKL

We get a video package showing the feud between The Lucha Brothers and La Faccion Ingobernable.

In our Mark Henry segment Nark Sterling interrupts to explain who Josh Woods is. Swerve and Lee explain their grudge and it’s time for our main event!

Everyone starts brawling on the floor at ringside. Lee and Woods square off and Lee drops Woods after Woods hits a pair of forearms. Lee and Swerve dominate early. Nese tosses protein powder at Lee, but Swerve kicks it into his face. Swerve tosses a table box at Nese and misses. Lee washes the powder out of his eyes but Nese hits him with the tackle box. Woods drives Swerve into the steel steps and we go picture in picture.

When we return to full screen, tables are set up and Swerve is fighting with Nese and Woods on the apron. Lee grabs Woods for a suplex, but Woods fights out. Swerve is able to get a sunset flip on Nese, but Nese escapes and gets in a kick. Lee is able to come in and tosses Nese into Woods. Lee goes to the ropes and Sterling hits Lee with a chair which just makes him angry and he grabs the chair. Nese and Woods hit kicks into the chair. Lee is dropped with a DDT and Swerve hits a 450 into all of them.

Sterling shoves a table into the ring and Nese sets it up. Swerve is able to break free of Nese grip and gets a kick on Nese. Sterling nails Swerve with a wrench in the back on the head and calls up Woods. Woods puts Swerve on the table and Lee grabs Woods and tosses him to the floor. Nese goes after Lee and Lee is able to head butt Nese.

Sterling tries to go to the top and Lee grabs his foot to stop him and Lee tosses Sterling through the table. Woods tries to suplex Lee off the apron into the tables, but Lee holds onto the ropes. Woods keeps punching and attacking and Lee won’t give up. Nese kicks Lee and Lee and Woods go into the table. Nese tosses chairs into the ring.

Swerve and Nese fight in the middle of the ring and Swerve is able to get a high body drop on Nese onto the chairs. Swerve goes up and gets the Swerve stomp for the three count.