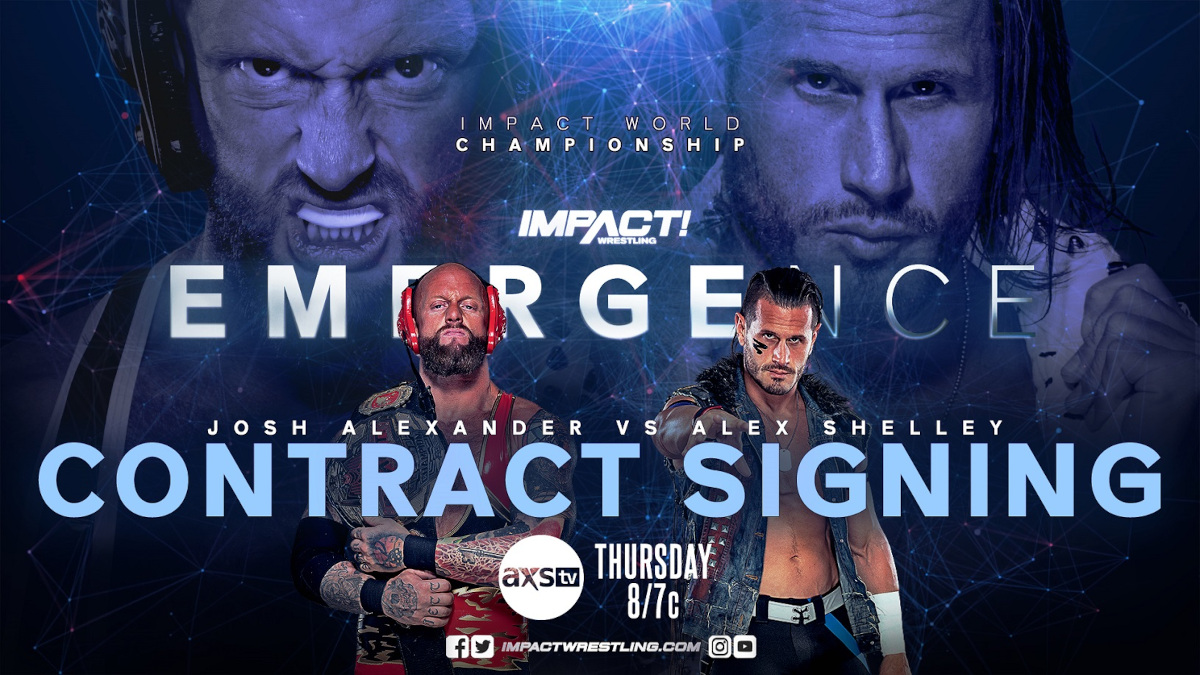 Just 24 hours before the high-stakes showdown between Honor No More and Bullet Club, Karl Anderson and Kenny King look to fire the first shot in singles competition! The members of both factions are banned from ringside for this match. King drapes the leg of Anderson across the rope to gain the early advantage. King targets the now-injured left leg as he begins to wear Anderson down. Anderson creates separation with a Dragon Screw leg whip, then fights back with a series of clotheslines. Anderson hits a single leg dropkick for two. Anderson counters the Royal Flush into the Gun Stun to win!

After the match, King attacks Anderson’s injured knee with a steel chair. King tries to take out Anderson for good when Heath delivers another blindside Wake Up Call. If Honor No More loses at Emergence, they must disband!

.@fakekinkade has his eyes on @Walking_Weapon‘s World Championship TOMORROW NIGHT at #EMERGENCE!

Before KUSHIDA and Chris Sabin unite to battle Violent By Design at Emergence, KUSHIDA goes one-on-one with Deaner here tonight! KUSHIDA quickens the pace in the early going as he hits a handspring kick, sending Deaner flying off the apron. Doering confronts KUSHIDA at ringside, allowing Deaner to gain the advantage off the distraction. KUSHDA turns the tide with a Pele kick, followed by a cartwheel dropkick for two. Deaner counters a handspring back elbow into a big clothesline. Doering tries to get involved again but Sabin pulls him off the apron. KUSHIDA hits a suplex and bridges into the cover for three!

Bhupinder Gujjar has had enough of Brian Myers’ games and challenges him to a Digital Media Championship match. Myers finally accepts the challenge for tomorrow night at Emergence!

Check out what @TheEricYoung had to say to @CodyDeaner 24 hours before their match with @SuperChrisSabin & Kushida at #EMERGENCE! #IMPACTonAXSTV pic.twitter.com/Ax215gtfyI

The leader of Violent By Design, Eric Young, says it’s time for him to step into the fold because this world doesn’t belong to us, it belongs to him.

The stunning and lethal Killer Kelly makes her IMPACT in-ring debut tonight after attacking OVW’s Tiffany Nieves just two weeks ago! Kelly makes quick work of her opponent as she locks in the Killer Clutch to win by submission.

Honor No More vs Bullet Club goes down at #EMERGENCE TOMORROW NIGHT and If Honor No More wins, they will receive their IMPACT World Tag Team Title shot – but if they lose, they must disband!

Eddie Edwards gives the rest of Honor No More a pep talk ahead of their match with Bullet Club tomorrow night at Emergence where if Honor No More loses, they must disband! Edwards praises Kenny King and PCO for softening up IMPACT World Tag Team Champions The Good Brothers.

Mia Yim squares off with former multi-time Knockouts World Champion Madison Rayne ahead of her Knockouts World Title opportunity against Jordynne Grace at Emergence! Yim chases her around ringside where Rayne sends her crashing into the steel ring post. Yim fights out of the corner but Rayne avoids her dropkick and hits a Northern Lights suplex for two. Rayne drives her head-first into the canvas with a head scissors. Yim catches Rayne in mid-air, then connects with a sit-down powerbomb to regain her composure. Yim hits a cannonball in the corner but Rayne grabs the bottom rope to break the pin. Rayne comes back with a Crucifix Bomb for a close call of her own. Yim puts her away with Eat Defeat!

Chelsea Green has returned after her one week absence to plan Deonna Purrazzo’s bachelorette party. VXT claim victory in their Knockouts World Tag Team Title match against Rosemary and Taya Valkyrie at Emergence.

The X-Division Title is up for grabs as Mike Bailey defends against NJPW veteran Rocky Romero. But there’s no rest for the weary as the winner must put the title on the line against Jack Evans tomorrow night at Emergence! It’s a stalemate in the opening moments of the match as Bailey and Romero match each other’s offense move for move. Romero ducks, causing Bailey to kick the steel ring post. Romero follows up with a Hurricanrana on the floor, then targets the left arm with double knees off the second rope. Bailey avoids the Forever Clotheslines, then connects with a running dropkick to create separation. Romero hits a springboard tornado DDT for two. Bailey delivers a flurry of kicks, Romero hits a clothesline and both men are down after Bailey connects with a superkick. Romero dives through the ropes, colliding with Bailey on the outside. Bailey is the next to fly as he hits a Moonsault to the outside. Romero almost puts him away with the running Shiranui. Bailey connects with Ultimo Weapon to retain the X-Division Title!

After the match, Romero shows respect to Bailey as he congratulates him on his hard-fought victory.

Who will conquer all obstacles and emerge victorious? Find out when IMPACT Wrestling presents Emergence LIVE THIS FRIDAY on IMPACT Plus and YouTube for IMPACT Ultimate Insiders from Cicero Stadium in Chicago, IL! Tickets are on-sale now at Eventbrite.com. Sami Callihan gets his hands on Steve Maclin. Two of AAA’s top Luchadores collide when Bandido takes on Rey Horus. KUSHIDA and Chris Sabin unite to battle Violent By Design. Mike Bailey defends the X-Division Title against the returning Jack Evans. Honor No More goes to war with Bullet Club and if Honor No More loses, they must disband. Mia Yim challenges Jordynne Grace for the Knockouts World Title. And in the main event, Josh Alexander defends the IMPACT World Title against Alex Shelley in Shelley’s first-ever IMPACT World Title opportunity.

IMPACT Executive Vice President Scott D’Amore hosts the contract signing for the IMPACT World Title match between Josh Alexander and Alex Shelley tomorrow night at Emergence. D’Amore says that this type of match is what IMPACT Wrestling has been built on: two world-class competitors at the top of their game competing for the ultimate prize. Alexander says that nobody is more excited for this match than him. Alexander praises Shelley for being original in an unoriginal business, and says that he began his wrestling career the day after he saw Shelley wrestle live. Before signing the contract, Alexander says that he has defeated countless Alex Shelley clones and it will be an honor to defeat the real Alex Shelley at Emergence. Shelley asks Alexander what he thinks makes him different than any of the Shelley clones he left behind. Alexander fires back and says that, like a lot of people, he’s more of a Chris Sabin guy. Alexander questions why Shelley hasn’t been able to win the big one and accuses him of being scared. Shelley claims that it won’t be Alexander’s plethora of physical injuries that cost him the victory at Emergence, it will be his psyche. Shelley says that Alexander will be staring across the ring at his hero and calls him an Alex Shelley mark. Shelley signs the contract and brings IMPACT! to an end with one final statement, “There’s your Alex Shelley autograph, Josh.”