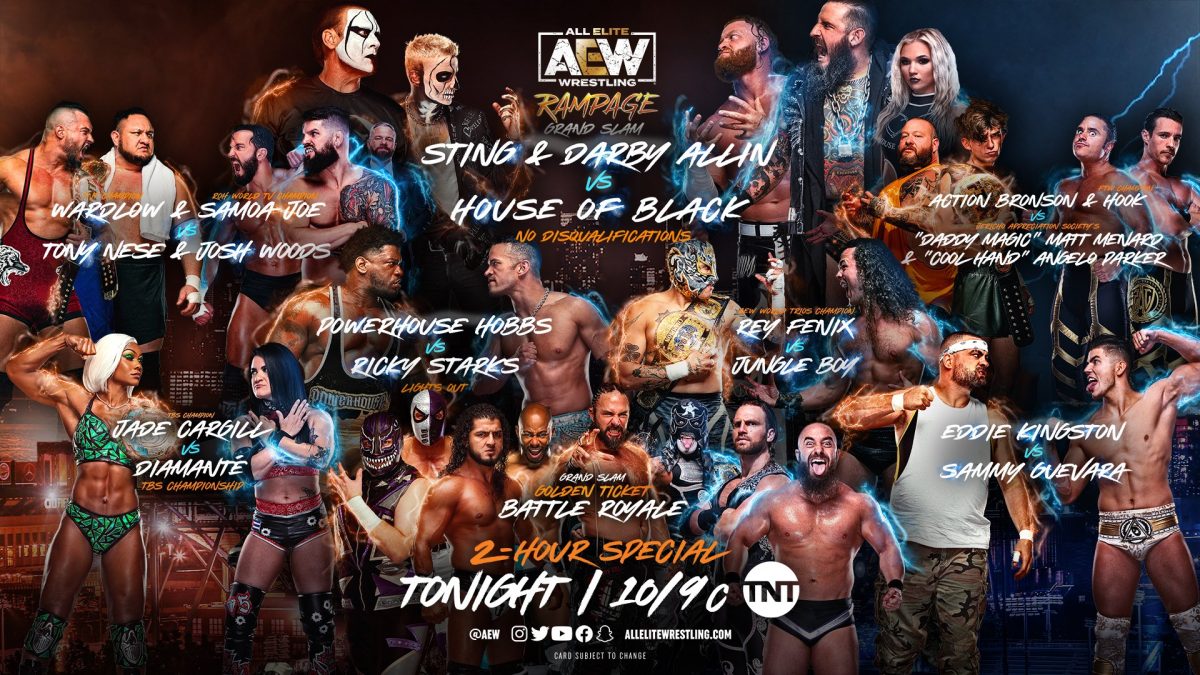 Sting and Darby Allin came from behind and attacked Matthews and King. The action is all over the stage area. The action spills back to the ring. Sting goes after Matthews on the outside who gets tossed into the steel steps. Back in the ring, King and Allin are in the ring exchanging chops. King chops Allin on the floor. King grabs Sting and rolls him back in the ring and begins to stomp on him. Matthews and King have Sting down, who then gets back to his feet. Sting comes back and fights off both men. Sting hits both Matthews and King with Stinger Splashes. King goes to take out Sting but he ducks and King hits Matthews instead. King has Sting on the top rope. Allin comes back in and climbs onto of King and hits a crazy avalanche code red on King from the tope rope. There is a table on the outside of the ring. Matthews and Sting are exchanging blows. Sting is on the top rope, as he puts Matthews on the table. Sting leaps from the tope rope, but King moves Matthews out of the way as Sting crashes down onto the table that breaks. Julia Hart comes in the ring with handcuffs. Hart and King handcuff Sting as Matthews takes out Allin and keeps him from entering the ring.

After the break Sting is down handcuffed in the ring as King and Matthews are double teaming Allin in the entrance area. Allin comes back with offense. Allin is on top of the ramp lighting and hits a coffin drop on Matthews. King tries a coffin splash on King, who catches him and chokes him out. King and Allin fall off the stage area onto a table as the crowd goes crazy. Matthews has Sting’s bat as he heads back to the ring. Allin and Sting are busted open as medical staff is tending to Allin. Matthews has a chair. Matthews puts Sting in the chair as Sting is laughing.

As Matthews is about to hit Sting with the bat, the lights go out and out comes Great Muta to a huge ovation! Matthews can’t believe it. Matthews is ready with the bat. Muta hits the ring. Matthews steps aside as Muta and Sting look at each other. Muta turns to Matthews and is takes him and sprays the green mist in Matthews’ face. Matthews bumps into Julia Hart and she falls to a table outside, but misses it and crashes partly on the non-padded part of the floor. Sting, breaks out of the handcuffs and hits Matthews with a scorpion death drop and covers Matthews for the pin.

After the match, Muta and Sting hug as the fans go crazy for Muta.

Action Bronson come out as Bronson is rapping to Hooks music. The fans seemed really quiet for the rap. Taz is on commentary for this match.

Smart Mark Sterling is in the ring saying he won’t get Power-bombed by Wardlow. Both Wardlow and Joe charge the ring. Nese has Joe by the ear and takes Joe to the ropes. Nese his taken out by Joe and then Joe hits the muscle buster on Nese for the pin.

Woods who had been laid on comes in from the outside as both Woods and Nese double team Joe. Wardlow comes in the ring limping, and takes out Nese and Woods. Wardlow picks up Nese for a powerbomb, but is hit from behind by Sterling. Sterling turns around and Joe pushes him into Wardlow who picks up Sterling for a series of powerbombs and the crowd goes crazy and chats one more time. Joe grabs Sterling and pushes him into Wardlow for another powerbomb.

Back from the break, the action is back in the ring as both men slap each other across the chest. Jungle Boy hits Fenix with a forearm and then follows up with a Lariat. Jungle Boy covers Fenix, but he kicks out at two. Fenix rolls to the outside as Jungle Boy leaps through the ropes onto Fenix and then hits Fenix with a thrust kick. Fenix gets up and hits Jungle Boy with a cutter. The fans begin to chant this is awesome. Both men exchange slaps to the chest again. Fenix goes for a double under hook which is countered by Jungle Boy. He covers Fenix for the pin, but only gets a two count. Fenix twists the arm of Jungle Boy who goes down. Both men are on the apron. Jungle Boy attempts a powerbomb on the floor, but it’s countered by Fenix who kicks Jungle Boy. Fenix superkicks Jungle Boy as both men then fall to the outside.

After the match, both men embrace and shake hands in the ring. Christian Cage’s music hits and Cage comes out with his arm in a sling and a mic. Jungle Boy looks on as Luchasauras’ music hits. Lucha comes into the ring from behind and takes out Jungle Boy. Lucha picks up Jungle Boy and plants Jungle Boy on the mat. Cage says that New York always makes him smile. Cage tells the crowd to sit down like the b—– that they are and sit down and shut up. Cage enters the ring as Luch has hit foot on Jungle Boy. Cage says that Jungle Boy took out his right arm and Cage has his right hand in Luchasauras and tells Jungle Boy not to come back next week. Lucha picks up Jungle Boy and slams him down hard.

We go to footage from Chris Jericho and the rest of the JAS announcing next week a JAS ROH celebration. Daniel Garcia tries to tell Chris something, but he cuts off Garcia and tells him to save it for next week.

Guevara has the mic and tells Eddie man to man he is sorry that he sorry that Eddie is a fat piece of S— Kingston goes crazy and takes out Guevara. Both men are on the outside and Kingston tosses Guevara into the ring steps. Kingston beats down Guevara as the the crowd chants Eddie. The ref tries to get in the middle, but Kingston tells the ref to back off and shut up. Both men are the ring apron. Guevara picks up Kingston with a backdrop who takes a crazy spill to the floor.

Kingston won’t let go after the bell. The staff and officials come out to try to get Kingston to break the hold. Ring announcer Justin Roberts announces that referee Paul Turner has reversed the decision and awarded the match Guevara. Kingston goes crazy and takes out the officials. The commentary team said the reversal was due to Tony Khan wanting the refs to tighten things up.

Jade Gargill comes out with the Baddies. Diamante has music artist Trina in her corner.

Trina is behind Cargill. Trina goes to pick up Diamante but instead kicks Diamante as she celebrates with Cargill.

Ari Daivari vs. Brian Cage vs. Chuck Taylor vs. Cole Carter vs. Dalton Castle vs. Danhausen vs. Daniel Garcia vs. Dante Martin vs. Dark Order’s 10 vs. Evil Uno vs. Hangman Page vs. Jake Hager vs. Jay Lethal vs. John Silver vs. Lance Archer vs. Lee Moriarty vs. Matt Hardy vs. Penta El Zero Miedo vs. Private Party vs. QT Marshall vs. Rush vs. The Blade vs. The Butcher vs. Trent

The winner gets a World Championship match on a Tuesday night Dynamite on October 18.

Paul White is on commentary. The battle royal begins as all the wrestlers brawling on the outside.

Back from the break 10 of the Dark Order is eliminated. Matt Hardy hits a twist of fate on The Blade and then eliminates Blade. The Butcher eliminates Hardy and Private Party. Evil Uno is now eliminated. Hangman Page eliminates The Butcher. Rush and John Silver exchange elbows. Rush eliminates Silver. Penta eliminates Lance Archer with a huge kick. Penta tosses out Jay Lethal, but is caught by Satam on the outside. Hangman Page eliminates both Penta and Lethal. Its down to Hangman Page and Rush. Both men exchange chops to the chest. Page comes back with a discus elbow on Rush. Page and Rush are on the apron as Page was hanging upside down. Both men are back on their feet exchanging blows. Page picks up Rush and hits him with a deadeye on the apron as Rush falls to the floor to be eliminated.

It was announced that Page will go on to challenge Jon Moxley for the AEW World Championship at the special Tuesday night Dynamite on October 18 in Cincinnati.

Mark Henry talks with both Powerhouse Hobbs and Ricky Starks and both men exchange words. Starks tells Hobbs that him beating Starks was a career highlight. Hobbs then tells Starks that he will have a lesson from the book of Hobbs.

Both men hammer each other and go to the outside. Starks takes out Hobbs with a huge clothesline on the floor. Back in the ring, Hobbs hits Starks with a neck-breaker. Hobbs brings a table in the ring and threw a table onto Starks. Hobbs grabs a bunch of chairs from under the ring and tosses them into the ring as we go to the last commercial break for the night.

Back from the break, Hobbs sets up a chair on turnbuckle. The table is set up against the ropes. Starks nails Hobbs headfirst onto the steel chair, then spikes Hobbs with a DDT. Starks goes for the three count, but Starks kicks out at two. Hobbs comes back and hits Starks with a low blow. Two chairs are set up as Hobbs attempts to pick up Starks, but he low blows Hobbs. Starks positions the chairs back to back. Starks attempts to pick up Hobbs and then Hobbs reverses it and Starks lands on the chairs. Hobbs picks up Hobbs and drops Starks with a running powerslam on the chairs. Hobbs goes for the pin, but only gets a two count.

Both men are on the ramp. Starks is crawling up the ramp. Hobbs takes out Starks and he continues to crawl. Starks gets up and Hobbs tosses him face first in the light fixtures. Hobbs tears off a light fixture from the stage area. Starks crawls back in the ring. Hobbs swings at Starks who ducks and then spears Hobbs through the table in the corner. Starks grabs the light fixture and hits Hobbs in the head with it. Starks picks up Hobbs and hits him with the Roshambo for the win.