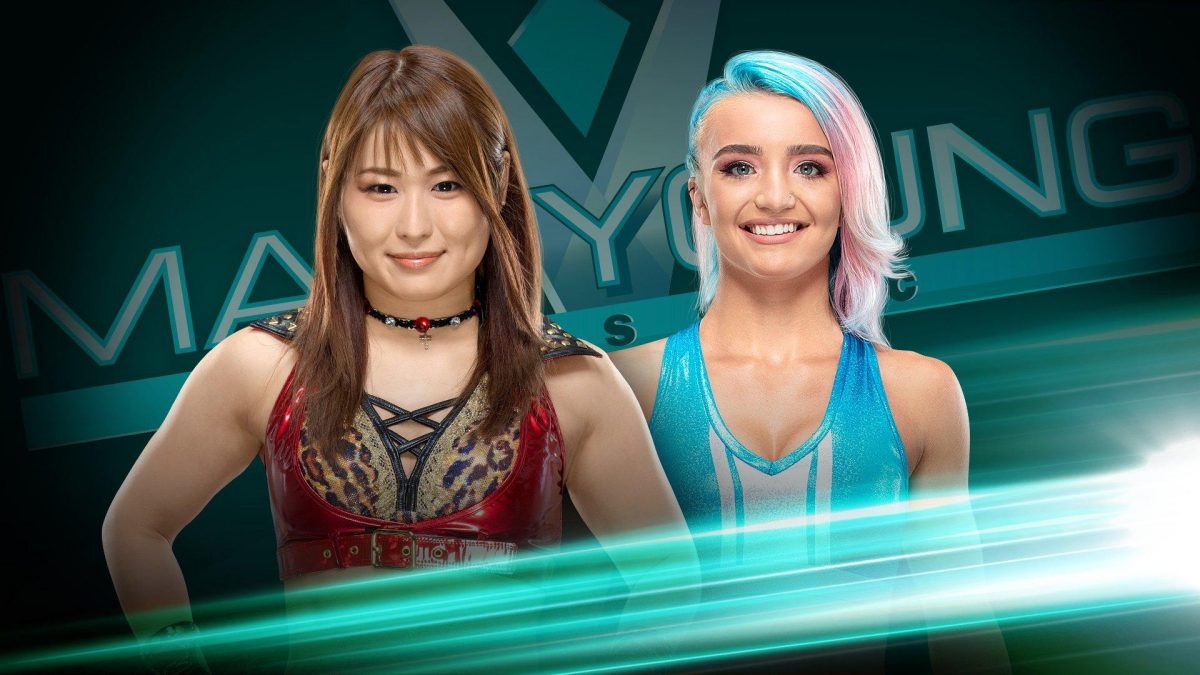 Hiroyo Matsumoto defeated Rachel Evers in a first round match

Evers is the daughter of Paul Ellering. And since she couldn’t be called Ellering, she took the real last name of her trainer, Lance Storm. Matsumoto called herself Lady Godzilla in her pre-match promo and told Renee Young that if she could wrestle any one person it would be The Undertaker.

Kassius Ohno, introduced as Evers’ boyfriend, was shown in the front row.

It was the Irresistible Force vs. The Immovable Object early on — as neither wrestler would give up an inch during a collar-and-elbow lock-up and a series of clotheslines. Michael Cole had his first “Michael Cole-ism” of the night when, after Beth Phoenix talked about how Evers was always in between Japan tours, Cole said that if Evers won tonight, people would take notice in Japan.

Matsumoto hit a beautiful missile dropkick that folded Evers up. She then placed Evers across the middle rope, ground her foot into the ribs of her opponent, and used the double knees for a near fall. Evers came back and hit a short powerbomb. Evers hit a pump kick, a Diamond Cutter, and a running senton for a near fall and then used a rope-assisted twisting leg drop for another near fall.

Both used hard open-hand slaps before Matsumoto knocked Evers down with a clothesline, in a throwback to the start of the match. Matsumoto hit a spinning elbow and a German suplex, but Evers exploded up! She did a pump kick on one clothesline attempt — but got caught the second time. The finish saw Matsumoto hit a powerbomb and a Rock Drop back suplex for the win.

Easily one of the best matches of the first round. That could have been a later round match. Speaking of the later rounds, Matsumoto will now move on and face Toni Storm.

Taynara Conti defeated Jessie Elaban in a first round match

Conti is the first Brazilian woman signed to WWE. She has competed in the WrestleMania Women’s Battle Royal and — for one show — was kind of a member of Undisputed Era last year. Elaban is goofy and falls down a lot. That’s not me being a jerk, that’s literally how she describes herself.

Dana Brooke was at ringside and Cole was way too happy about this.

Conti used a hip toss to start the match and Elaban almost landed on her head. Elaban went for a corner splash. Conti not only moved, but shoved her into the top rope. The good news for Elaban is it’s a good thing she likes falling down, because Conti had no problem bumping her all over the ring. Conti went for a kick to the face, but Elaban moved and Conti kicked the bottom turnbuckle, which gave Elaban her opening.

Elaban got in a little bit of offense, including hitting a flying forearm in the corner, but she got cut off quickly and was laid out with a spinning side slam, which gave Conti the win.

The biggest positive of this match was it’s now over. Conti will face Lacey Lane in the round of 16.

Nicole Matthews defeated Isla Dawn in a first round match

Isla Dawn is a former actress, has wrestled in PROGRESS, and is signed to the NXT UK brand, while Matthews is a 12-year veteran who has wrestled primarily in ECCW and Shimmer. She also once lost to Asuka on NXT.

Renee Young was hoping Dawn broke out witchcraft in this match. That would take this tournament in a direction most people wouldn’t expect.

Matthews used a draping neckbreaker from the middle rope and lit Dawn up with a series of kicks to the back. Dawn used a rolling uppercut, but when she went for it a second time, Matthews dropped her. Matthews’ strategy appeared to be to kick every possible inch of Dawn’s body, as she turned to her stomach and chest. Dawn came back and decided that what’s good for the goose is good for the gander, as she kicked Matthews up and down her body, used a running knee, and hit a fisherman’s suplex for a two count.

Dawn used an Olympic Slam for another near fall. Matthews came back with a knee strike and locked on the Liontamer for the submission win. I guess Dawn should have broken out the witchcraft, eh?

Matthews will move on and go one-on-one with Tegan Nox. Young said they will have a “pound-for-pound hardway matchup” — whatever that is.

Io Shirai defeated Xia Brookside in a first round match

Brookside is 19 years old. I don’t want to put her down, but she had slightly less than zero percent chance of winning this match. On a positive note, she is the daughter of Robbie Brookside. Shirai is only 28 years old but is a legend already. I would be here until tomorrow to list all of her accomplishments and awards.

Kairi Sane and Robbie Brookside were both sitting ringside. It was noted that this was the first time Brookside ever saw his daughter wrestle live.

Brookside tried breaking out a flying headscissors at the bell, but it didn’t work out for her and Shirai, who was the crowd favorite, took over. Shirai slapped on a twisting crossface with such remarkable speed. Cole noted that Shirai’s two dream opponents were Charlotte Flair and Asuka.

Shirai used a springboard moonsault to win what was almost an extended squash match. Brookside did her best, but she was outclassed in this one.

Shirai picked up Brookside and hugged her after the match. Now, Shirai goes on from here to face Zeuxis.

So that does it for the first round. Thank you all so much for reading — and we kick off the round of 16 next week!