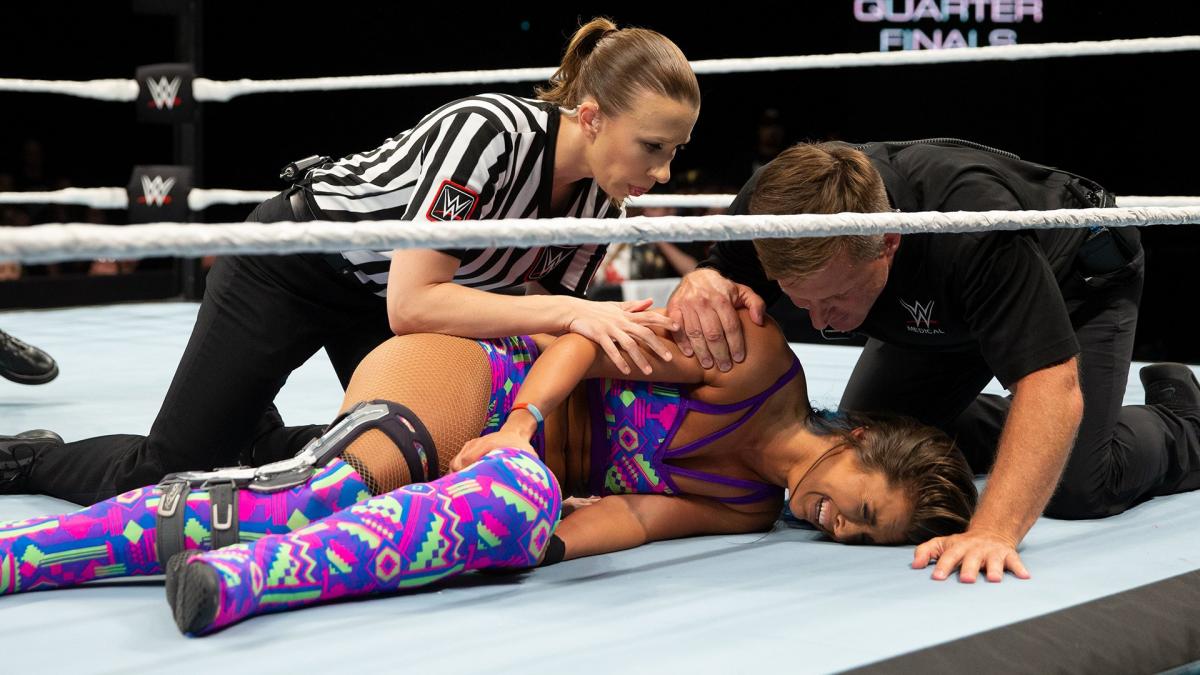 Tegan Nox suffered a terrible injury to her left knee during the Mae Young Classic in a match against Rhea Ripley that was taped in August.

The match finally aired last night on WWE Network and it showed how Nox injured her knee on a suicide dive to the outside. She tried to continue, but was in obvious pain, slamming her arms on the ring steps in frustration.

WWE also posted this video of Triple H consoling a distraught Nox backstage as she was being checked on by the medical staff.

Until now, there haven’t been many details about the injury, but Nox finally posted more information today on Twitter. She revealed, “I was diagnosed with numerous injuries to the left leg which included: dislocated knee cap (luckily it reset itself instantly), torn MCL & LCL, I completely tore my ACL and both meniscus, bone contusions and I had a Segond Fracture on my left tibia… Basically my knee exploded and I made a huge mess!!”

Well…that happened 🖤 I may be out for a while but I cannot thank my friends and family for everything they’ve done the past few weeks and for all the kind words I’ve received, it genuinely warms my heart and gives me that extra 🔥 to come back even better 🏴󠁧󠁢󠁷󠁬󠁳󠁿🤙🏼 pic.twitter.com/1CzYBOGGrq

On last nights episode of the Mae Young Classic, during my match with Rhea Ripley I suffered an injury to my left leg very early on and as soon as it happened, I knew it was serious.

I tried to carry on as far as I could but a few minutes later after trying to push through the pain and finish the match, it all got too much and the match was stopped.

Being greeted backstage by the distraught faces of my friends and coaches was the most heartbreaking thing I’ve ever experienced and it hurt more than the injury itself.

Knowing how excited they were for me to compete this year and how hard they helped me work, then having it taken away so quickly, it was devastating! I felt as if I had let them down and it broke my heart!

Triple H was one of the first of many people there and I’ll never forget the words that he & Mr Regal said. There were many things said to me that night by people I hold so dearly that continuously play through my mind on loop, especially when I’m having a bad day mentally that help me pick up my head and give me the kick up the a$$ that I need!!!

Anyway, after being checked over by Doc, I was taken to the local hospital where I was diagnosed with numerous injuries to the left leg which included: dislocated knee cap (luckily it reset itself instantly), torn MCL & LCL, I completely tore my ACL and both meniscus (one had a “lightening bolt shaped tear” still a wizard when injured 😂), bone contusions and I had a Segond Fracture on my left tibia….Basically my knee exploded and I made a huge mess!!

Days later, I was sent to one of the best surgeons, who also fixed my right knee and on August 23rd I underwent ACL & Meniscus reconstruction surgery which was a flying success.

Obviously this means I’ll be out for a while but with the incredible Dr’s and PT team at the WWE Performance Centre, I’ll be back shinier than ever! We’re already almost 2 months into rehab and it’s going amazingly, we’re right on track and smashing goals already!!

I can’t thank Triple H, the Coaches, the Medic staff, my friends, family and fans enough for all the support that you’ve given me over the past few weeks! They’ve been very tough both physically and more so, mentally, but I’ve done it once and I can do it again.

It’s going to be a long road to recovery, but it’s already started and I plan on making my return special!! There’s going to be some changes but they’ll all be for the best! As Triple H said “this is just a bump in the road”, this isn’t the end, trust me 🏴󠁧󠁢󠁷󠁬󠁳󠁿⚡ (The photo was days after the op, Now I’ve got a badass scar 😎)