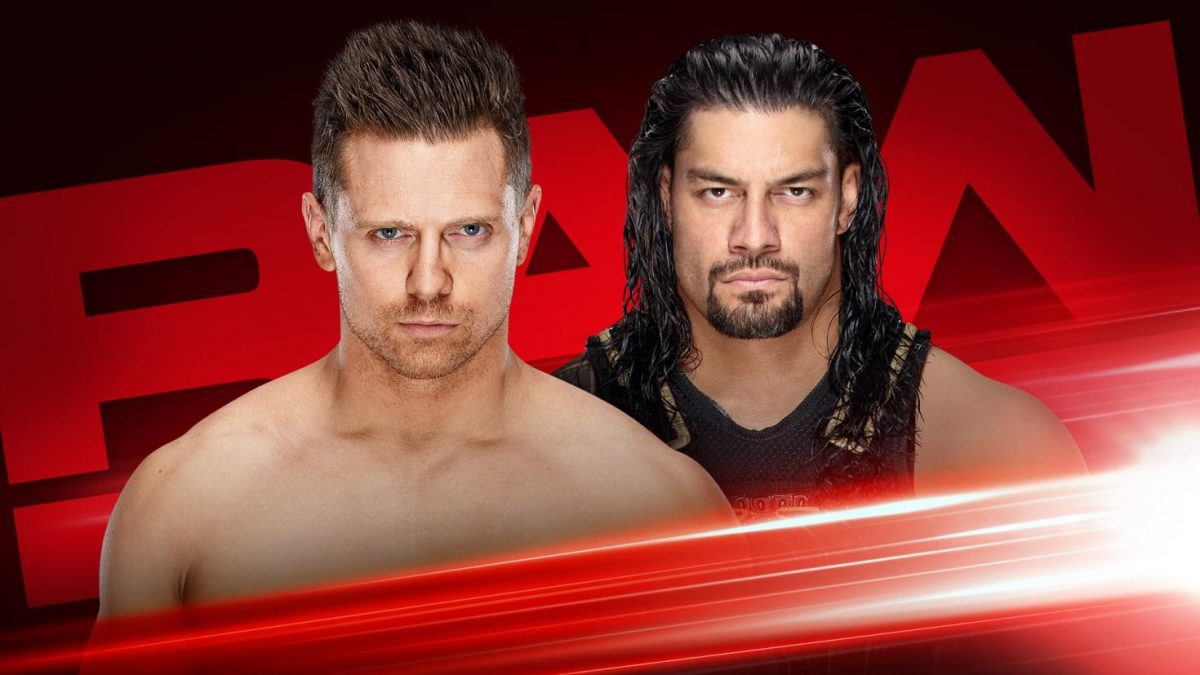 Titus O’Neil defeated EC3 – Lots of love for EC3 here in the UK, but it matters not. The burial continues – Titus picks up a swift enough win.

The Revival defeated Lucha House Party – Hurrah! Fists best Flips in London. Neat little tag team match that will be worth the watch back on tv.

In-Ring: The Miz, Roman Reigns, Elias, Shane McMahon – Miz welcomes us to the “International edition” of MizTV. Hypes the MITB ladder matches and his match with Shane before introducing ROMAN REIGNS! The Big Dog is here! “Walk With Elias..” cut Roman off right at the start. Big Dog says Elias is a karaoke performer, a wedding singer. 😱 Miz gives a HUGELY passionate speech about his match with Shane… hey presto, Shane O’Mac is here. Elias and Lashley ambush Reigns and Miz. Tag match, I suspect…? Yep. Shane confirms it.

Backstage: Sami Zayn, Braun Strowman, Shane McMahon – After a great package hyping Rollins/Styles at MITB, we’re backstage with Strowman, who has been summoned to Shane’s office, where Zayn is having a moan. Shane makes a match between the two – if Sami wins, he replaces Strowman at MITB.

Mojo Rawley defeated Apollo Crews – Literally hundreds of fans make a dash for the toilet or whatever – which is harsh. Mojo has literally won the match in the time it’s taken me to finish this Tweet. Wow.

In-Ring: Becky Lynch, Charlotte Flair, Lacey Evans – London, predictably, loves a bit of Becky! Lynch: “One of you dopes can’t afford to lose your first championship match, the other can’t afford to lose your millionth!” London gives Flair the WHAT treatment. But The Queen cares not and continues unflustered. This has gotten out of hand FAST. Contact signing gets physical, who’d have thought? In short, Evans and Flair crash Becky through a table! Oof.

Baron Corbin defeated Ricochet – Huge win for Corbin who nets a clean pin after End of Days on Ricochet. Corbin then sets up a ladder and climbs it, but Ricochet shoves him off.

Backstage: Cesaro, Rey Mysterio – Mysterio and Cesaro brawl backstage after Cesaro jibes that Rey’s son looks like Samoa Joe. “Are you even sure he’s your son?” Asks Cesaro. 😱

Fatal 4-Way: Nikki Cross defeated Natalya, Naomi and Dana Brooke – NIKKI CROSS WINS! Wow, what about that? Mild-mannered backstage Nikki is gone: in-ring Nikki is her usual maniacal self! Big win. Look out for a Dana ladder splash in this one.

Rey Mysterio defeated Cesaro – Mysterio v Cesaro is next and it’s as good as you’d expect between these two. Watch for the suplex. Rey wins with the usual routine but this was a fun match.

Backstage: The Revival – Backstage promo with Revival. A little ‘comedy’ but a serious finish, where Dash and Dawson call-out the Usos for a match. “The embarrassment of the Revival stops.” We can only hope.

Backstage: Seth Rollins – Backstage promo with Rollins hyping the Styles match at MITB. Interestingly, neither of those two have been seen live here as yet.

Sami Zayn defeated Braun Strowman – The fight has spilled into the concourse here at the O2! Baron Corbin is involved, trying to help Zayn defeat Strowman, who fights back! Now McIntyre is in on the act! He DDTs Strowman on a chair but it still isn’t enough for Zayn to get the pin. The brawl continues! ZAYN PINS STROWMAN! The numbers game proves too much as McIntyre and Corbin continue the assault, giving Zayn the assist. Sami Zayn replaces Strowman at MITB on Sunday! Likely after the show went off the air, Strowman recovers to choke slam Zayn through the announce table.