The XFL announced that they have signed multi-year deals to air their games on ABC, ESPN and FOX.

Games will air on Saturdays and Sundays and there will also be games on Thursday in prime time (8PM ET) on FOX in the last two weeks of the 10 week season. 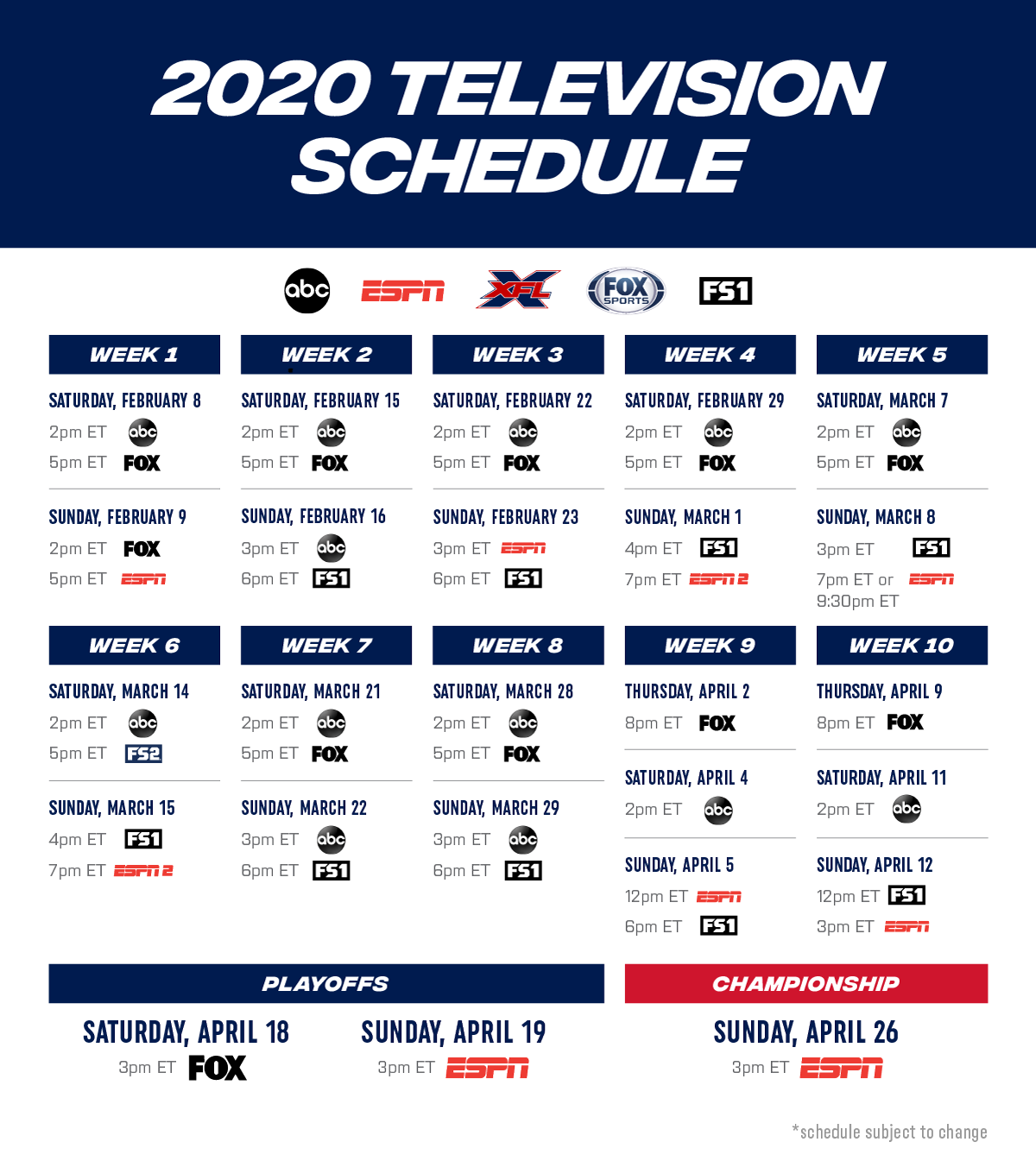 According to Sports Business Daily, the TV networks are not paying rights fees to the XFL, but they will cover production costs for the games, which are around $400,000 per game.

The networks are not paying a rights fee, but ESPN and Fox are picking up production costs, which generally amount to around $400,000 per game, sources said. As part of the deal, the nets will sell ads around the game; the XFL will handle sponsorships at the venue. ESPN and Fox will hold streaming rights to XFL games. The two nets also will cross-promote games during game broadcasts.

The #XFL has four new homes.

Adding to its unrivaled football portfolio, FOX Sports announces a multi-year deal with the XFL to televise weekly games on broadcast and cable starting with the inaugural 2020 season. #FOXisFootball 🏈

"We look forward to showcasing the XFL on ESPN & ABC, including the kickoff game & championship during the league’s inaugural season…which will be a great addition to our year-round commitment to football" – ESPN EVP @burkemagnus https://t.co/6t1rxlgFVL pic.twitter.com/YcaqjOkVFI

XFL TO AIR ON ABC, ESPN, FOX SPORTS AND FS1

“We look forward to showcasing the XFL on ESPN and ABC, including the kickoff game and championship during the league’s inaugural season,” said Burke Magnus, ESPN Executive Vice President, Programming and Scheduling. “Vince McMahon and Oliver Luck are two of the sports industry’s most creative and experienced leaders, and they have exciting plans for this league. We believe in their vision for the XFL, which will be a great addition to our year-round commitment to football.”

“We welcome the XFL to the FOX Sports Family and are pleased to expand our relationship with Vince McMahon,” said Eric Shanks, FOX Sports CEO & Executive Producer. “Football is in FOX Sports’ DNA and a key component of our programming strategy. Alongside Oliver Luck and his incredible team, we’re excited for the debut of the XFL on FOX Sports.”

“We are thrilled to partner with ESPN and FOX Sports, two innovative media companies with extensive experience in world-class football production that will undoubtedly help us reimagine football,” said Vince McMahon, XFL Founder & Chairman. “The XFL broadcast schedule provides us with incredible reach and makes it easy for fans to watch our games consistently every weekend.”

The agreements were negotiated by CAA Sports and Evolution Media Capital (EMC) on behalf of the XFL.

The XFL will kick off on Saturday, February 8, 2020 with teams in Dallas, Houston, Los Angeles, New York, St. Louis, Seattle, Tampa Bay and Washington D.C. Additional XFL-themed programming and on-air talent will be announced in the future.