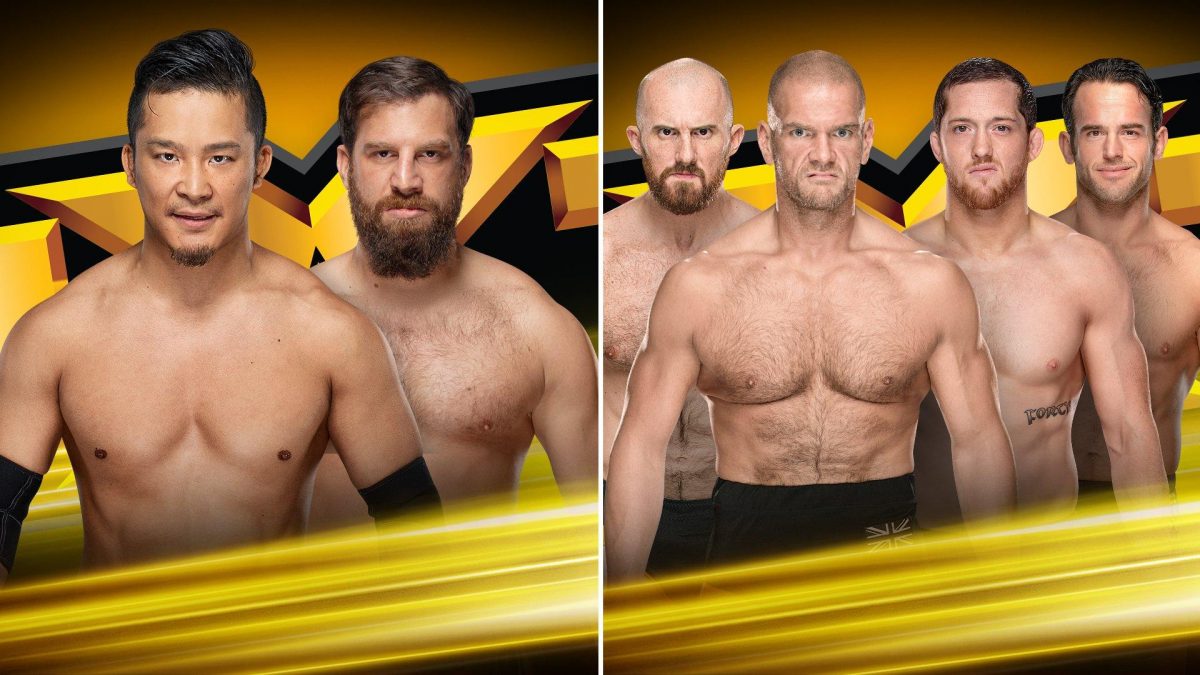 Candice and Duke start things off and Duke misses a round kick and Candice with a rollup for a near fall. LeRae with a drop kick and Shafir tags in. Candice with a drop kick followed by an elbow and snap mare. LeRae with a leap frog neck snap and jackknife cover for a near fall. Shafir goes to the floor and Duke pulls Marina out of the way and LeRae hits Duke. LeRae kicks Shafir and Shafir returns to the ring. Shafir kicks LeRae off the turnbuckles. Duke tags in and connects with a knee and elbows to the back. Duke gets a near fall.

Shafir tags in and she takes LeRae down with a judo throw for a near fall. Shafir stretches LeRae on her back. Shafir kicks Io off the apron and then Duke tags in and kicks Candice. Duke gets a near fall. Duke with a double wrist lock and she keeps LeRae from making the tag. Candice with a kick to Duke and a punch to Shafir. Duke keeps Candice from getting to her corner. Candice sends Duke into Shafir and Duke cannot knock Shirai off the apron. Candice with an enzuigiri and both women are down. Shirai tags in and she connects with a forearm and double sledge.

Shirai with a Tiger Feint Kick to Duke and Shafir grabs the leg from the floor but Shirai kicks her away and hits a springboard drop kick on Duke. Shirai looks at Baszler and sets up the arm on the mat to stomp on the elbow. Shirai with a running double knee strike in the corner and then Shirai goes up top and Shayna pulls Duke to the floor. Shirai with a moonsault onto Shayna and she kicks the champ. LeRae with a suicide dive onto Shafir and Duke. Shirai continues to attack Baszler and Shayna is sent into the ring steps and the referee calls fro the bell.

After the match, Shirai continues to attack Baszler and they go into the crowd while Shafir and Duke use the advantage to work over Candice. Shayna with forearms to Shirai and Io is sent into the guardrails. Security comes out to separate LeRae from Shafir and Duke.

We see Velveteen Dream. He says it is beautiful, it is solid and it can go on forever. It deserves the spotlight. Dream says he is not talking about the title. Be ready for the next experience. Dream Over.

We have a video package for Damian Priest and he will be on NXT next week.

Drew sends KUSHIDA into the turnbuckles and chops KUSHIDA> KUSHIDA slides to the floor and Drew follows after him and KUSHIDA with a handspring kick to knock Drew off the apron and send him to the floor. They return to the ring and KUSHIDA with an arm bar. KUSHIDA with a wrist lock and Drew slams KUSHIDA face first into the mat. Drew with another face first slam into the mat. Drew with a Gory Special and then he stretches KUSHIDA. Drew gets KUSHIDA’s shoulders to the mat and he applies a modified Boston Crab but KUSHIDA escapes.

KUSHIDA returns to the arm and he tries to kick Gulak in the arm but Gulak moves. Gulak and KUSHIDA with rollups but there is no count. KUSHIDA goes for the ankle lock but Drew with an ankle lock of his own. Drew stomps on the back to add more pressure and then he bends the leg over. KUSHIDA makes it to the ropes to force Drew to release the hold and Drew waits until the last moment to release the hold. Both men go to the apron. Drew with a kick to the midsection and he kicks KUSHIDA again. KUSHIDA with kicks to Drew but Drew gets KUSHIDA on his shoulders and KUSHIDA sends Drew back into the ring with a rana.

Drew and KUSHIDA exchange forearms. Drew with a drop kick and KUSHIDA with a handspring back elbow. KUSHIDA kicks the arm and then he takes Drew down and applies the hoverboard lock and Drew taps out.

After the match, Drew has some words for KUSHIDA and then he offers his hand and KUSHIDA shakes it.

We go to Aliyah and Vanessa Borne from earlier today. Aliyah says they are finally ready to go home. Vanessa says that Mia Yim thinks she is next in line for a title shot. Aliyah says they are more deserving of title matches than Mia. Mia lowers the women’s division. Aliyah says Mia does not look like a champion. Vanessa has a care package for Mia. Aliyah says we can only hope that Mia can become a high caliber woman like them and then they will take her seriously. 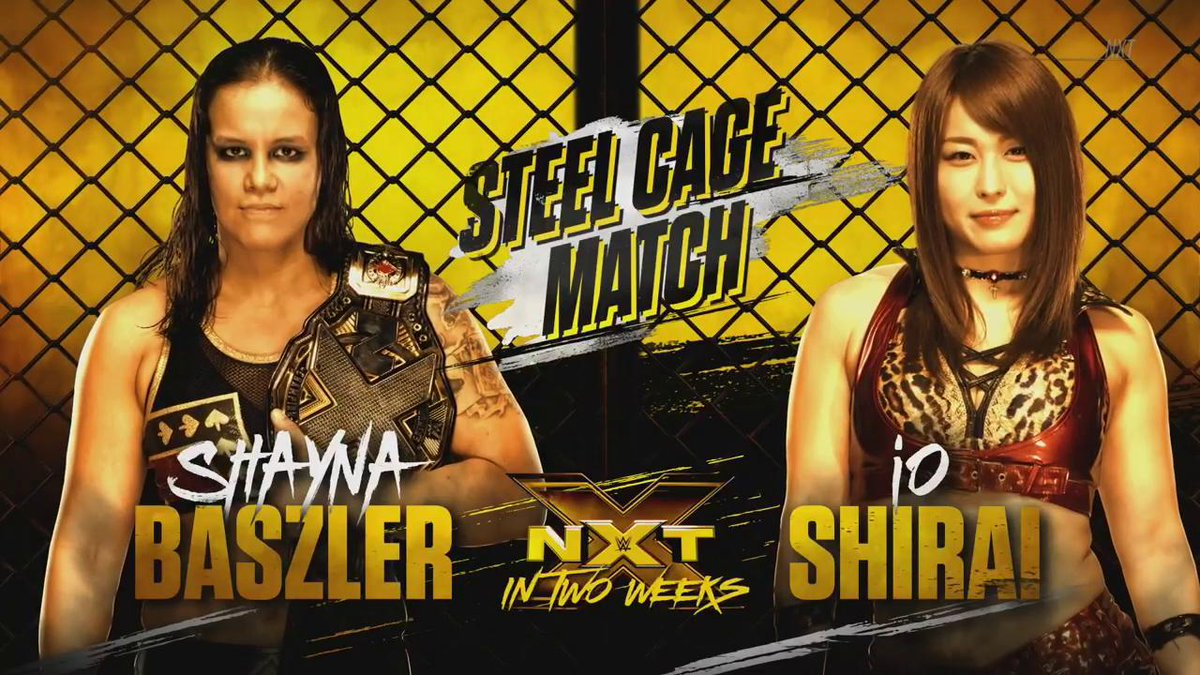 In two weeks, we will have a steel cage match between Io Shirai and Shayna Baszler.

Next week, NXT Men’s Champion Adam Cole will be on television.

The referee has to keep both teams apart before the match starts.

Kyle and Lorcan return to the ring and Burch tags in and kicks Kyle. Lorcan with a half and half suplex and Burch with a kick but Strong makes the save. Lorcan tags in and Burch kicks and punches Strong. Lorcan and Burch with splashes into the corner. Strong sends Burch into Lorcan and Kyle kicks Lorcan. Strong tags in and he chops Lorcan. Strong with kicks in the corner followed by a back breaker on the shoulder. Kyle tags back in and Strong kicks Lorcan while Kyle kicks Lorcan. Kyle with a waist lock take down and elbows and knees to the ribs. Kyle with a sliding knee to the back.

Jaxson Ryker makes his way to the ring and he has to be held back but Ryker choke slams security.

Burch pushes Kyle into Strong and Burch with a rollup on Kyle for the three count.