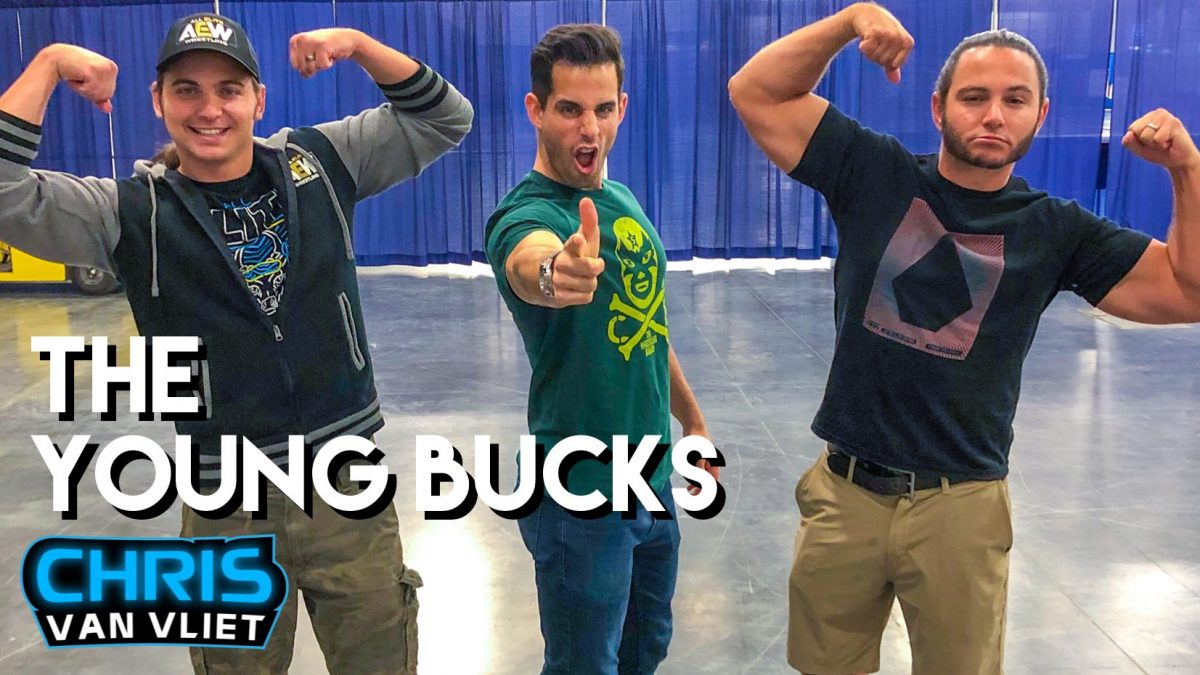 The Young Bucks were interviewed by Chris Van Vliet.

They cover a number of topics including how the unprotected chairshot to Cody at Fyter Fest was supposed to go, the conversations they’ve had with CM Punk, how close they were to signing with WWE, the possibility of an AEW video game, PAC’s contract status, if Being The Elite will continue once AEW starts on TNT, who has the final say about storylines in AEW and much, much more!

On CM Punk in AEW:
Nick: We’ll be honest. Of course, we would love him to come to our company. At this time, I just don’t think he wants to.
Matt: When he wants to come back to wrestling, it’ll be his decision.
Nick: Matt talks to him all the time about it but the timing is not right, I guess.
Matt: Professional wrestling is the most demanding thing in the world. You can’t just find yourself back in it one day and be like ‘okay, I guess I’m doing this again.’ You really have to want to do it and that’s up to him.

The latest on PAC and AEW:
Matt: He’s coming. I mean, eventually.
Nick: It’s a work in progress. It’s obvious that Matt and I are big fans of his. We met him like 10 years ago over in Japan so we’ll always have ties with him and we wanna work things out with him.
Matt: It’s a priority for us and I think we’re gonna make this thing work.
Nick: I think it’s just a matter of trying to fit his schedule with ours and hopefully, things will work out.

On the “gimmicked” Cody Rhodes chairshot at Fyter Fest:
Nick: The chair, the middle of it was so thin, it should have probably broke over his head if it was right in the middle. The edge of it happened to nail him right in the back of the head and that’s what cut him up … It would have felt like a cooking sheet, as thin as that. So it should have been like that but it didn’t.
Matt: It hit him at the wrong angle and it busted him open … The lip caught him and it got him good.
Nick: Either way, we knew it would carry controversy.
Matt: We warned him and we were like ‘this is going to be a big thing’ and it was and it had its effect and it worked but I’m just glad he’s okay. It’s scary. Anything messing with your brain, it’s freaky. Everyone was freaked out either way. I’m just glad he’s okay.
Nick: I don’t think Tony will allow that again.
Matt: He was pretty upset about it.

On their Executive Vice President roles in AEW:
Matt: We’re such a baby company, still. I think we’re still just trying to figure that out. We’re all wearing 20 hats each.
Nick: We are behind the tag teams that are getting hired and signed. There’s different categories, you could say. Kenny is taking his time on the women’s division. He’s got his hands all over that.
Matt: You should have seen him at Fyter Fest. He worked 3 different matches he had to coach. Plus he had to do our match. He was nuts that day … At the end of the night, he just passed out.

On the impact they are having on the wrestling business:
Nick: We’ve changed the whole pay scale for everyone in wrestling, which is awesome. A lot of our friends are getting paid and they’re finally making money for the first time in their careers. It feels good, it feels awesome.
Matt: The pressure has been put on everybody in the professional wrestling business … Everybody is trying harder now. It’s very competitive again. We need competition again. The industry needs it to survive.

On Being The Elite and if it will continue when AEW TV starts:
Matt: We always say we don’t know but how could it not in some way? I don’t know if it’s going to be the same format. Who knows? I don’t think that we can just get rid of it because it’s so powerful of a tool for us. I think it’s always going to have to be around in some fashion.

What would Matt and Nick have done if there was no AEW?
Nick: The last options we had before AEW became a thing was going to WWE or starting our own thing and we were probably going to start our own thing.

Was WWE an option?
Matt: We talked to them endlessly. At one point, I remember me, Nick and Kenny were in a room because all of our deals were up at the same time. We got off the phone one day and we looked at each other and we said ‘I think we’re all going to WWE.’ It was that close. Tony came to us at the right time and he made the right offer. I’m not talking financially, I’m talking ‘hey, you guys can run this thing’ and ‘I want you guys to hire your people.’ It’s like someone saying ‘I want you to make a movie and you can hire all the cameramen. You can hire all the writers, all your friends to be with you.’ He gave us the keys to this thing. You can’t say no to this.
Nick: One thing that took out of the race for going to WWE was the amount of dates that they wanted us to do.
Matt: They even offered us a limited schedule.
Nick: We have young families. Even with the limited schedule, it was like ‘God, I can’t imagine being home [just] for 2 days for my kids.’

On WWE’s view of AEW as competition:
Nick: They hate us, I think.
Matt: Why wouldn’t they? We’re disrupting everything.
Nick: New Japan hates us too.
Matt: I think everybody looks at AEW as competition because we’re this new thing. People are afraid of the unknown. They’re like ‘who are these guys’ and every day you see a new headline about something we’re doing. It’s intimidating. People are fearful of change, I get it.
Nick: We’re gonna stay that way. We’re gonna be the alternative and we really do mean it. We want to be different from every other company that you see. I feel like the first 2 shows that we’ve done, we’ve given a different type of shoe every time we’ve done it.

Is there any talk about making an AEW video game?
Matt & Nick: Yes
Nick: We’re gonna have a little bit of everything.