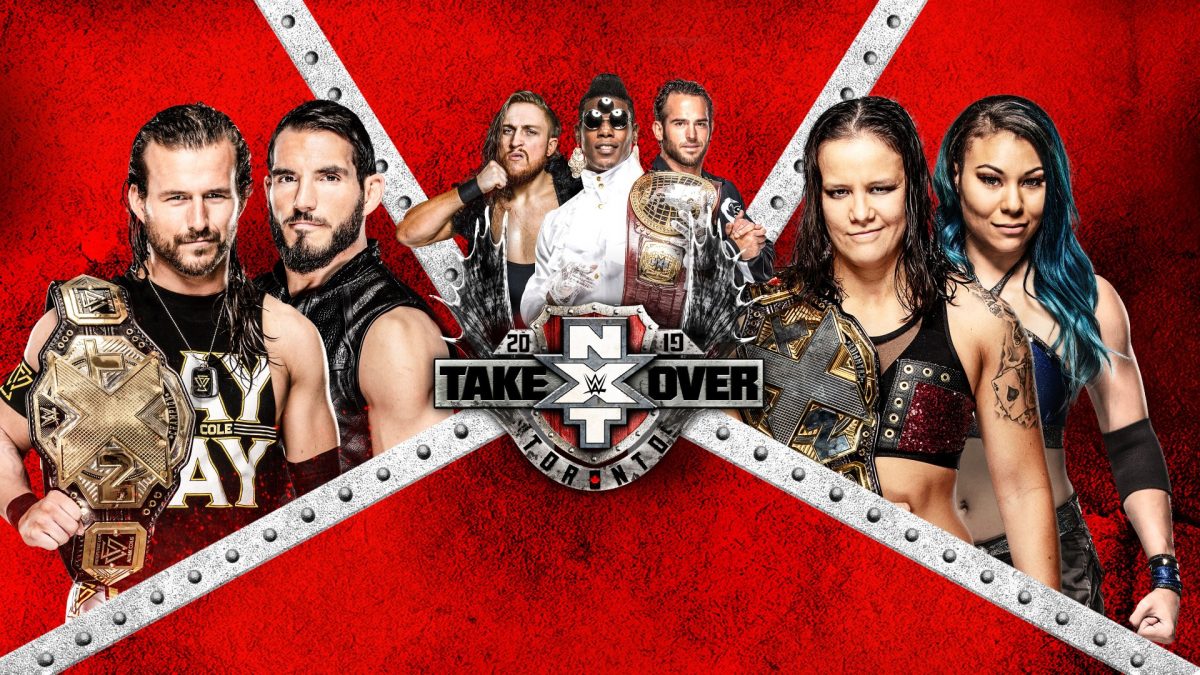 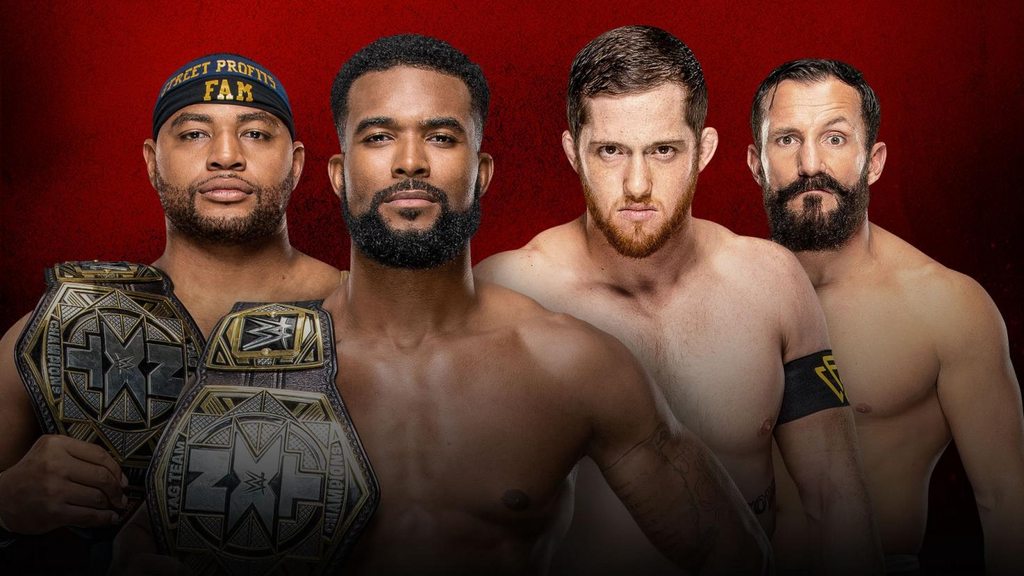 A few minutes in, Montez Ford went for a People’s Elbow on Kyle O’Reilly, but Bobby Fish grabbed his leg to trip him up. Dawkins took out Fish and Ford got back up and hit O’Reilly with a Rock Bottom instead.

Later, O’Reilly locked on a guillotine on Dawkins, but Ford went to the top and hit a Blockbuster on O’Reilly… but Fish broke up the pin.

In the end, Dawkins hit a spear on O’Reilly, then a spear on Fish. Ford went to the top and hit a Frog Splash on O’Reilly for the win.

The Street Profits celebrated with their red solo cups in the crowd after the match.

Decent match with a couple of good spots, but not very good compared to most past TakeOver tag team matches. 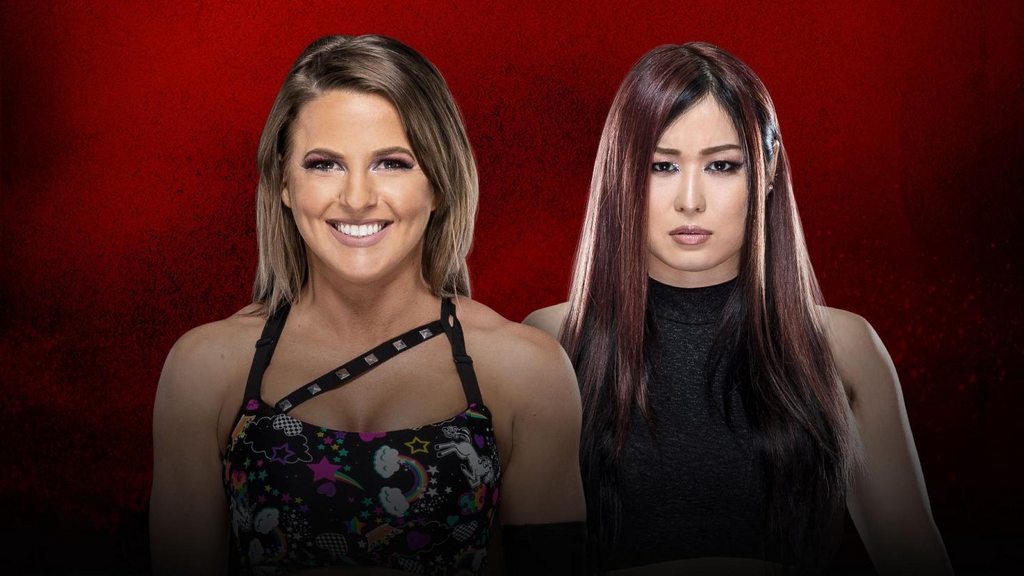 They started battling on the outside within the first few seconds, with Shirai suplexing LeRae on top of the announce table.

Shirai controlled the match for a few minutes until she missed a top rope drop kick. Later, LeRae knocked Shirai to the outside then dived out and hit her with a tornado DDT to the floor.

In the ring, LeRae tried to springboard backwards at Shirai, but Shirai caught her and hit her with a bridging German suplex. Double knee strike in the corner by Shirai, then she went to the top… LeRae tried to grab her, but Shirai did a backflip off the top to escape.

Shirai picked LeRae up in a fireman’s carry, but LeRae hit a cool reverse frankensteiner, then a swinging neckbreaker off the middle rope, which got a “this is awesome” chant from the crowd.

Later, Shirai hit a cool top rope Spanish Fly, but LeRae kicked out, frustrating Shirai. Shirai hit a backbreaker, then went to the top and hit her moonsault… 1-2-no!

A frustrated Shirai started to aggressively pound on LeRae with forearms, then locked on a Koji Clutch… and LeRae was out!

Matt Riddle suddenly ran out through the crowd with a mic, saying “Bro, bro, bro.” He said “I know Killian Dain is in the building, so why don’t you get your hairy ass out here and fight me face to face, bro!”

Dain ran in through the crowd and Riddle immediately went after him. They started to brawl until referees ran down to break it up. Dain stomped on Riddle’s bare foot, which temporarily brought him down, but Riddle got back up and ran down the entrance ramp at Dain, then hit him with two knee strikes, then got on top of him and started nailing him until more people ran down to break it up.

Riddle then took out about five “security guards.” Dain ran at Riddle and hit him with a cross body. Riddle got on his back and locked on a choke hold… Dain tried to ram him into the LED screen multiple times, then suddenly jumped off the stage, with Riddle on his back, taking out a security guard with them and landing down below through a few tables.

EVOLVE Champion Austin Theory was shown in the crowd and was hyped up as a future star. Theory is great. 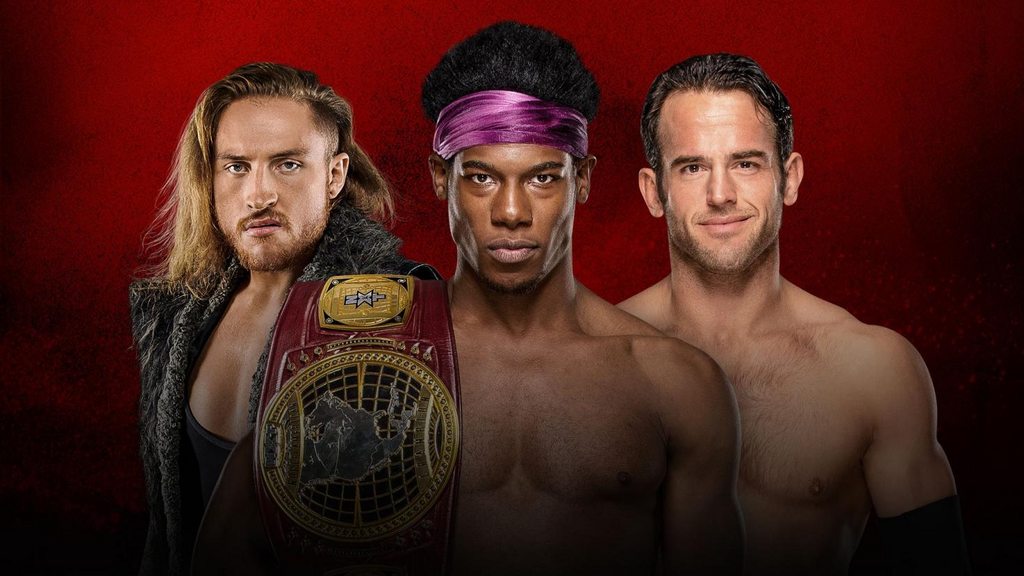 The Mountie’s theme suddenly hit and a bunch of dancers wearing mountie hats started dancing… it eventually turned into Velveteen Dream’s theme and he came out wearing what looked like a mountie hat, but his regular gear (in red and white for Canada’s colors). The Mountie’s theme is amazing…

A few minutes in, Dream locked on a Sharpshooter on Strong, but Dunne broke it up with a top rope double stomp on Dream.

Later, Pete Dunne locked on a triangle on Strong in the corner. Dream went to the adjacent top rope and hit a coast to coast elbow drop on Dunne.

Strong started nailing Dream and Dunne with elbows, then locked on a Boston crab on both guys at the same time.

Dunne “snapped” both Dream and Strong’s fingers, then hit a Bitter End on Strong… He went for the pin… 1-2… but Dream dived under the referee’s arm to stop the count. 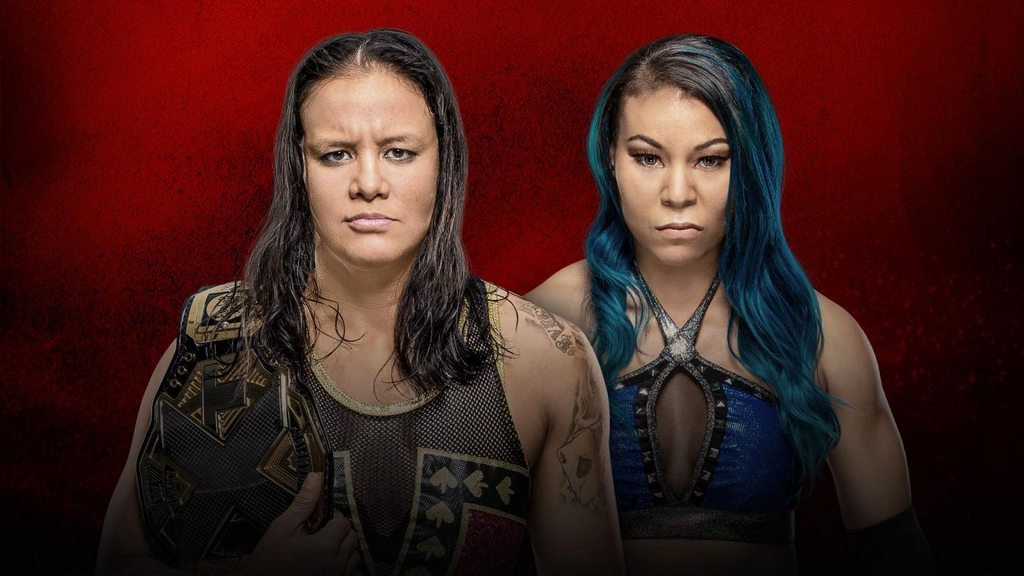 Early in the match, Yim pinned Baszler’s arm in the ring steps and kicked them.

A few minutes in, the crowd seemed pretty dead for the first time all night.

Yim hit a top rope “Code Blue,” but it wasn’t enough for the win.

Yim ran off the ropes and Baszler suddenly locked on the Kirifuda Clutch, but she sold that her arm was hurt and Yim was able to break free. She locked it on again, but Yim broke free again… but Baszler was able to lock on a triangle chokehold… and Yim tapped.

Seems like the right call to keep the title on Baszler. Yim did not seem very over, and this match wasn’t very good.

WWE UK Champion WALTER was shown in the crowd, as was Tyler Bate in another section. They’ll face each other for the title at NXT UK TakeOver: Cardiff on August 31. 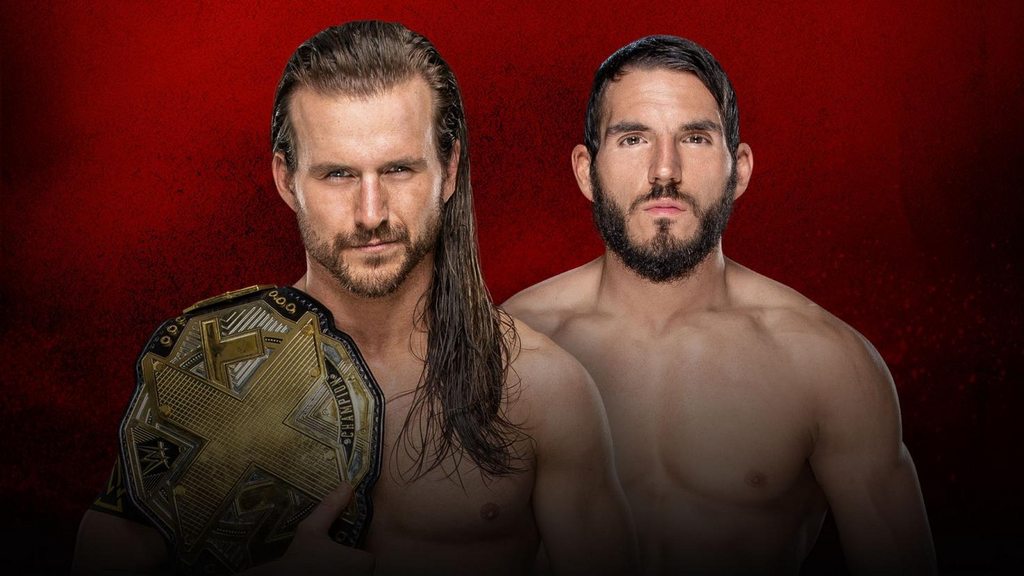 Late in the first fall, Gargano dived from the outside through the middle rope and hit Cole with a DDT. He then tried it again, but Cole hit him with a superkick.

Cole went to the outside to grab a chair. The referee grabbed it from him and went to put it outside. Behind the ref’s back, Cole kicked Gargano right in the balls. He went for the pin, but only got a near fall.

Cole set up the chair in the ring and sat in it, then taunted Gargano. The ref said he’ll disqualify him and Cole got in the ref’s face. Gargano then nailed Cole with a superkick.

Gargano picked up the chair… The ref said that he’s going to disqualify him if he uses it… and Gargano smashed Cole in the back with the chair!

The ref called for the DQ…

Gargano looked at the camera and shrugged, then nailed Cole with the chair several more times.

Gargano took Cole through the crowd and attacked him there. They returned to ringside, where Gargano brought Cole on top of the announce cable. Cole fought back and went for a double underhook move, but Gargano reversed and back dropped Cole through the Spanish announce table.

Gargano brought in two tables and two more chairs into the ring. He walked in but Cole immediately hit him with a Shining Wizard. But Cole fought back and hit a lawn dart on Cole into a chair, then locked on the Gargano Escape… and Cole tapped.

A steel cage suddenly was lowered to the ring, with several weapons attached all over it, including barbed wire over the top portions.

The crowd started chanting “ECW.” The ring announcer said that the only way to win is from pinfall or submission and there was no escape from the cage.

They each grabbed kendo sticks and started hitting each other, then hit simultaneous superkicks.

Later, Gargano grabbed a fire extinguisher and sprayed Cole with it, then hit him with a tornado DDT on a chair.

Cole set Gargano up on a chair and went for the Last Shot, but Gargano moved and Cole hit the chair. Later, Gargano hit a crazy top rope Canadian Destroyer, but Cole kicked out.

Gargano suddenly pulled out a bag of weapons, which had brass knuckles and bolt cutters in it. He grabbed the bolt cutters and climbed the cage and started cutting the barbed wire on the top. He cut off a piece and brought it back into the ring…

Overall this was a good show, but felt like the weakest TakeOver in recent memory.