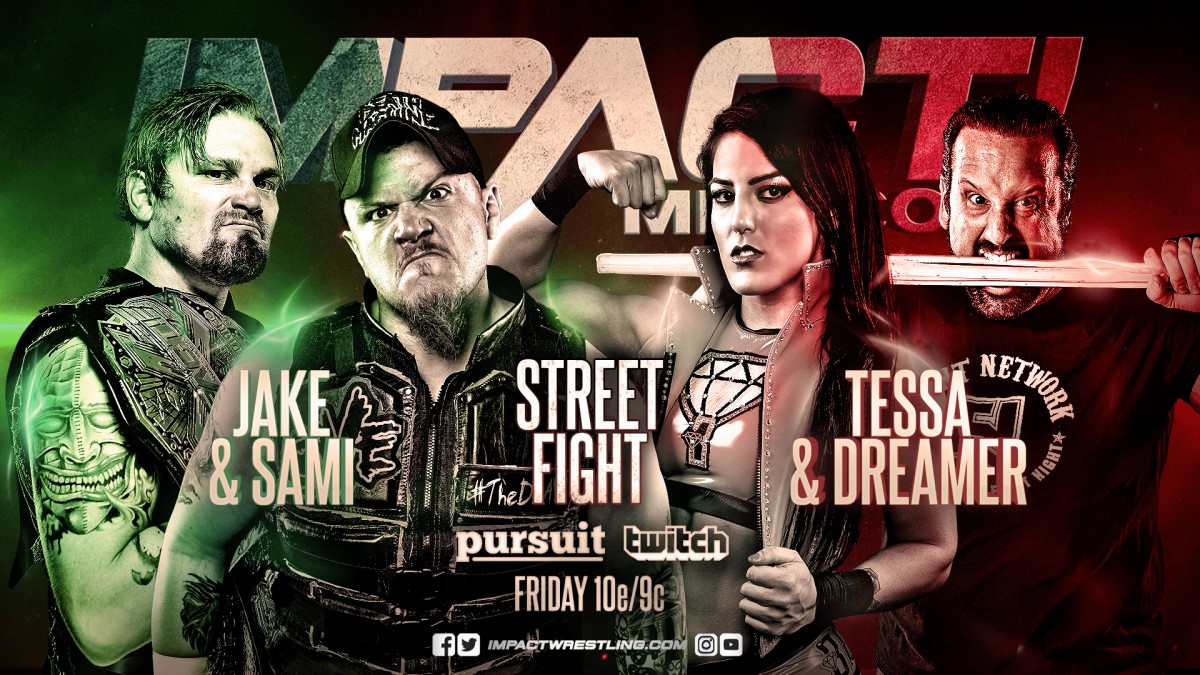 This is Tenille’s IMPACT Wrestling in-ring debut. Kiera retreats in the early going. Kiera takes over with a superkick. Kiera hits a flurry of running strikes in the corner. Tenille connects with a Butterfly Suplex, followed by Taste of Tenille for a two count. Tenille attempts the Spotlight but Kiera counters into a rollup for a near fall. Tenille avoids a running strike, allowing her to lock in the Tarantula on the ropes. Tenille hits a top rope Crossbody, followed by the Spotlight to win.

On the oVe cam, Sami Callihan complains about IMPACT Management giving Brian Cage 6 weeks until he has to defend the World Championship. Cage will defend against Callihan at Bound for Glory.

No. 1 contender @TheSamiCallihan is FURIOUS he has to wait 6 weeks for his World Title shot against @MrGMSI_BCage…

Tag Team Champions The North are interviewed by Jimmy Jacobs about retiring LAX in the Titles vs Careers match last week.

#TheNorth forced #LAX out of #IMPACT Wrestling last week and they're PROUD of it!

Dinastia hits a Hurricanrana, catching Elgin off guard. Dinastia jumps off the top but Elgin catches him in mid-air and connects with a backbreaker. Dinastia attempts a springboard to the outside but Elgin catches Dinastia once again and powerbombs him on the apron. Elgin puts Dinastia away with Emerald Flowsion, the signature move of Marufuji.

After the match, Elgin gets on the mic and says that win sends a message to Marufuji, the one man who never fought him in Japan. Elgin challenges Marufuji to a match at Bound for Glory on October 20th.

Knockouts Champion Taya Valkyrie invades Rosemary’s lair once again, looking to better their relationship. Taya gifts her a cell phone so they can keep in contact. Much to the dismay of Rosemary, Taya invites her out to brunch next week.

The Demon Assassin @WeAreRosemary having mimosas with Knockouts Champion @TheTayaValkyrie? This is something we have to see!

Moose says he’s going to walk the mean streets of Mexico City next week to prove to Ken Shamrock he’s the most dangerous man in the world. Moose and Shamrock will meet one-on-one at Bound for Glory.

Danger? @TheMooseNation laughs in the face of danger!

Wagner gets on the mic but Texano attacks him from behind to gain the early advantage. Texano wants to attack Wagner with the bullrope but the referee stops him. Wagner gains control with series of Dragon Screw leg whips, followed by a cutter. Wagner dives off the apron, crashing into Texano on the floor. Wagner takes Texano off the top with a Superplex for a two count. Wagner connects with a signature sit-down slam to win.

Ace Austin makes Alisha promise him she will stay backstage during his match with Eddie Edwards tonight.

It continues… @The_Ace_Austin makes @MrsAIPAlisha promise she'll stay in the back for Ace's match against @TheEddieEdwards TONIGHT.

LAX are packing up the clubhouse when Rich Swann and Willie Mack come in to say their goodbyes. Swann and Mack challenge Santana and Ortiz to one final match next week so they can go out the right way.

James Mitchell warns Havok about the dangers of Su Yung.

Eddie is furious and charges the ring. Eddie takes out Ace in the early going with a dive to the floor. Ace throws his jacket in the face of Eddie, allowing him to gain control with a spin kick. Ace delivers his signature paper cut to Eddie. Ace hits a low blow behind the referees back but Eddie comes right back at him with a huge clothesline. Eddie hits the Blue Thunder Bomb for a two count. Ace smashes Eddie over the head with baton, followed by a springboard kick for a very close near fall. Eddie connects with the Tiger Driver but Ace somehow kicks out at two. Eddie grabs a chair and hurls it at Ace, causing the disqualification.

Eddie continues the beatdown on Ace, hitting him with the Boston Knee Party. Security attempts to break things up but Eddie throws a chair at one of the security guards.

Jimmy Jacobs interviews Brian Cage and Melissa Santos to congratulate them on their engagement last week. Melissa reveals that they’re getting married in two weeks on IMPACT in Las Vegas.

Sit down with @MrGMSI_BCage and @ThisIsMelSantos after getting engaged last week on #IMPACT!

Ace Austin is being put in the back of an ambulance. Alisha is furious at Eddie Edwards for brutally attacking him and a security guard just moments ago. Alisha gets in the back of the ambulance with Ace. Behind her back, Ace can be seen making a rude sexual gesture.

"You're not my husband, you're a cheating bastard!"

The Deaners are making the Desi Hit Squad compete in their farm clothes after being forced to work there in recent weeks. We learn that Gama Singh recently disappeared from the farm. Mami embraces The Matrix as she narrowly avoids some offense. Both Raj and Rohit get squashed by Mami and Nino in the corner. Nino and Mami take turns soaring through the air as they crash into the Desi Hit Squad on the floor. Nino launches himself off the top rope onto Raj to win.

After the match, Mahabali Shera makes his return and takes out the Deaners. Gama Singh returns and applauds as Shera stands tall with the Desi Hit Squad.

Sami and Jake meet Tessa and Tommy on the stage, a brawl breaks out to start the match. Tessa jumps off the apron, hitting Jake with a running Hurricanrana on the floor. Tessa and Dreamer hit Jake with Dusty Rhodes style strikes, followed by in-sync cutters to Callihan and Jake. Sami reverses an Irish Whip, sending Dreamer into a steel chair. Tessa tries to take on both Sami and Jake but falls victim to the numbers game. Tessa takes out Jake with a super crossbody off the top. Callihan is about to hit Tessa with a Piledriver but Dreamer breaks it up with a kendo stick shot. Dave Crist and Madman Fulton hit the ring, causing a distraction for Dreamer. Callihan hits Dreamer with Cactus Special Piledriver to win.

After the match, oVe continue the beatdown on Dreamer. Tessa tries to fight back but gets taken out with a steel chair shot from Callihan. Once again, Callian attempts the Piledriver on Tessa but this time, RVD and Rhino make the save. Tessa stands tall with the hardcore legends to close the show.