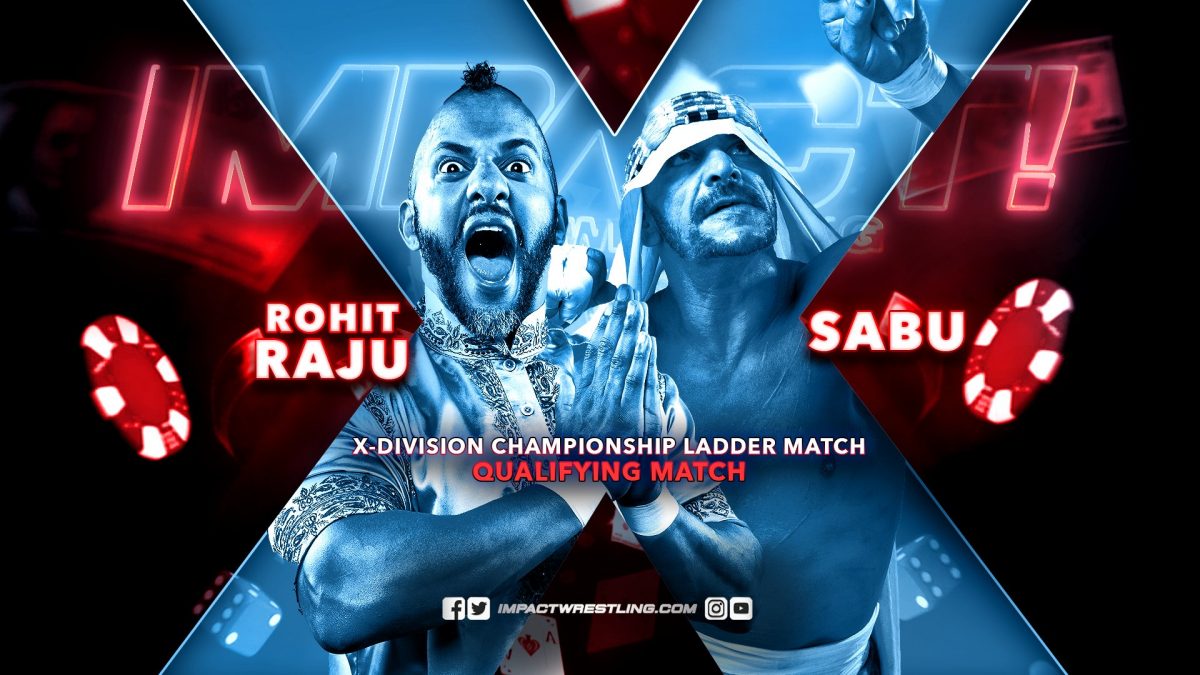 Elgin uses his incredible power to suplex Fallah. The feats of strength continue with a big powerslam. Fallah builds momentum with a series of palm strikes, followed by a running crossbody for a two count. Elgin hits a running clothesline for a near fall of his own. Fallah climbs to the top but Elgin cuts him off and connects with the Elgin Bomb to win.

After the match, Elgin looks at the camera and sends a message to his Bound for Glory opponent, Marufuji. Elgin wraps a steel chair around the neck of TJP and sends him into the steel ring post.

Jake Crist is looking to tune up for his X-Division Title defense in a multi-person Ladder Match at Bound for Glory. Bey flies over the top rope, crashing into Jake on the ramp. Bey jumps off the top rope but gets cut off with a mid-air superkick from Jake. Later on, Bey connects with a slingshot DDT for a near fall. Jake hits a super cutter off the top to win.

If @The_Ace_Austin wins the X-Division Title at Bound for Glory, he may finally… you know…

Backstage, Ace Austin invites Alisha to party with him after he wins the X-Division Title at Bound for Glory this Sunday. At first, Alisha refuses but Ace persuades her to change her mind.

.@TheTayaValkyrie will do whatever it takes to retain the Knockouts Title at Bound for Glory.

Taya Valkyrie looks at herself in the mirror, looks back on her past and claims she will defeat Tenille Dashwood to retain the Knockouts Championship at Bound for Glory.

This is a preview of the 3-way match for the Tag Team Championships Sunday at Bound for Glory. Rhino takes Swann and Alexander off the top with a huge Tower of Doom. Swann is about to jump off the top but Page gets up on the apron. Willie pulls him off and RVD gets involved. Alexander back body drops Swann over the top rope into the three of them on the floor. Rhino hits Alexander with a Gore but Page pulls the referee out. Page claims that Willie pulled the referee. In the ring, Swann capitalizes off the distraction with a 450 on Alexander to win. If he does that on Sunday, we’ll have new tag team champions.

Sami Callihan delivers a very real message ahead of his World Championship match with Brian Cage this Sunday at Bound for Glory.

The winner of this match will join Jake Crist, Tessa Blanchard, Ace Austin and Daga in a Ladder Match for the X-Division Title at Bound for Glory. Sabu and Genie take turns launching themselves off a steel chair, colliding with Raju in the corner. Sabu hits a springboard tornado DDT. Genie tosses Sabu a steel chair and he rings it off the head of Raju. Gama tries to get involved but Genie stops him with a steel chair shot. Sabu sends Raju through a table on the outside with a leg drop off the top. The referee counts to ten, ending the match in a double countout. Neither man will be heading to the X-Division Title Ladder Match at Bound for Glory.

Over the Top Rope Battle Royal

(Winner Enters Call Your Shot Gauntlet at #20, Runner Up Enters at #1)

Eddie Edwards, Kiera Hogan, Jordynne Grace, Havok, Johnny Swinger, Cody Deaner, Cousin Jake, Mahabali Shera, Raj Singh, Luster the Legend, Adam Thornstowe and Rosemary are competing in this Battle Royal. Swinger oversteps his boundaries with the Knockouts, causing them to team up and throw him over the top for the first elimination. Kiera dropkicks Jordynne off the apron for the second elimination. Jake is eliminated during commercial break. Havok throws Kiera over the top but Cousin Jake catches her. Kiera instructs Jake to put her down and that’s exactly what he does, eliminating her in the process. Havok clotheslines both Raj and Cody off the apron for a double elimination. Rosemary eliminates Havok but Havok returns the favor from the outside as she pulls Rosemary over the top. Luster eliminates Thornstowe by accident. Eddie takes advantage of the shock and eliminates Luster. Reno Scum distracts Eddie from the outside, allowing Shera to powerslam Eddie over the top to win. Shera will enter the Bound for Glory Call Your Shot Gauntlet at #20, Eddie will enter at #1.

IMPACT Wrestling’s biggest event of the year, Bound for Glory, goes down this Sunday live from Chicago on pay-per-view.