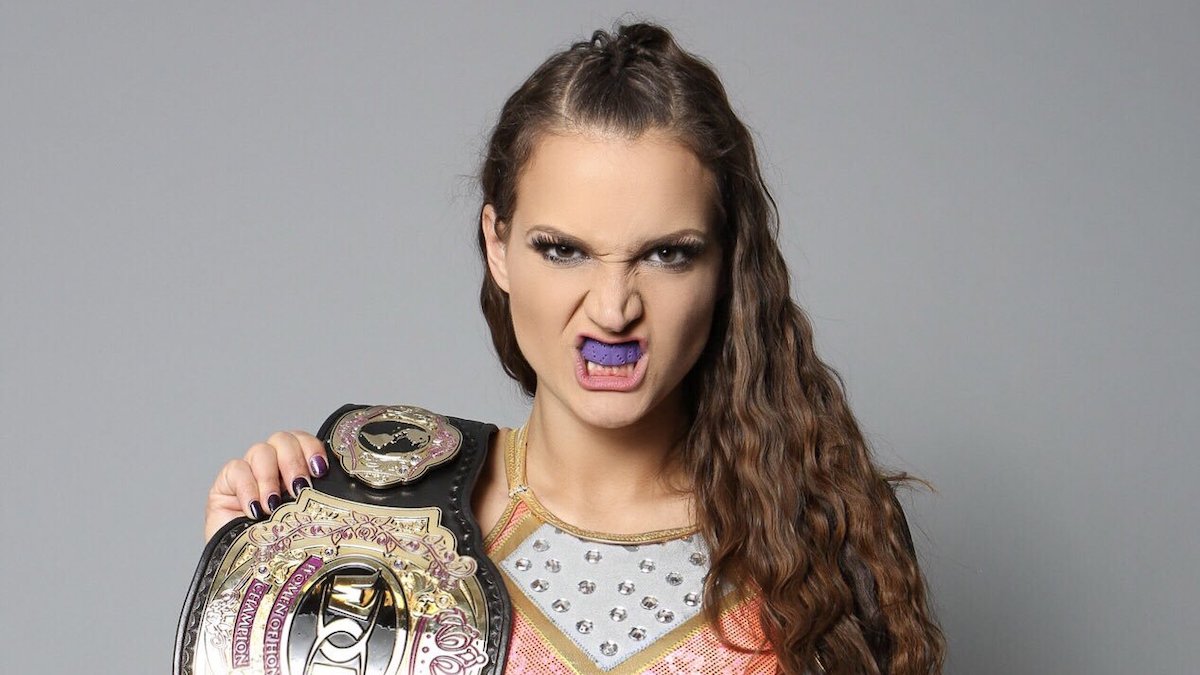 Her husband BJ Whitmer tweeted today that she was fired via email on Tuesday night.

Now that the cat is out of the bag. Yes, my wife @RealKellyKlein was fired by @ringofhonor COO Joe Koff, via email Tuesday evening. Not a phone call, an EMAIL. Kelly is still very much suffering from Post Concussion Syndrome and was fired while still injured. https://t.co/0Otra5aq4j

Ring of Honor responded with the following statement (via PWInsider):

“We don’t generally discuss personal issues but they seem to have made it public – we didn’t fire [Kelly Klein], we just notified her that we would not be renewing her contract.”

Klein’s current contract expires on December 31 and she had been in negotiations with ROH for a new deal, according to PWInsider.

Whitmer responded on Twitter, “‘Not renewing’ someone’s contract or ‘parting ways’ is the same thing as firing them.” He also called ROH COO Joe Koff a “beady-eyed, turkey-neck, lying sack of shit” and a “horrible, rotten human being.”

Joey Mercury, a former producer and member of the ROH creative team who was let go by the company last month, shed a lot of light on the situation by posting the entire email that Koff sent to Klein.

How dare she!?!? The nerve. That’s what you get, @RealKellyKlein – hey I wonder who else you sent that nice email to? What if Tomorrow’s Summit was actually the resignation of GG & JK!?!? If it isn’t- I’m more than prepared to get LOUD & specific. Talent deserve this treatment. pic.twitter.com/RY2hPdfyX0

Kelly, Thank you for your email the other day and I’m glad that you are getting treatment for your injury.

As you have known over the years in Ring of Honor, we always take any injury very seriously and have supported many through their recoveries.

That does not change here as your health is of the utmost importance.

However, there are also important things unrelated to your injury that we haven’t really had a chance to discuss, and perhaps we probably should have when you came to Baltimore, but I was more interested in what you had to say.

What I did not hear though was any remorse for what transpired to that point. I was really hoping to hear some acknowledgement about wanting to move past the actions that you had taken, that have hurt the company.

The company is firm that pursuant to your contract, section 15 — you have breached our existing agreement by sharing confidential documents and emails with another contractor, who used the material to defame and slander the company and one of its key officers, Greg Gilleland. You also used your social media presence to help this contractor’s twitter account gain traction, and to validate his claims, which further your involvement in these actions. This was painful to watch.

Personally, I always appreciated the level of open communication we have had with our talent, and the ability to approach Greg or I anytime you had an idea or thoughts to improve any aspect of the company.

Despite the clear breach of your contract and ethical requirements, I still appreciate the time you have spent with ROH. Therefore, rather than pursue the breach which would terminate our existing agreement right now and enact a 6 month non-compete, I have decided to let your current agreement continue as it is and then expire at the end of the term. Also at this time, we are also choosing not to continue with our ongoing negotiations that began in July. We will follow up with written correspondence outlining the same.

I wish you the best.

When Mercury left ROH last month, he was very outspoken against ROH, posting a series of tweets claiming that ROH had unsafe working conditions and no concussion protocol and that they sent Klein to work a show on October 30 despite her having a concussion.

Klein supported Mercury on Twitter, and her husband BJ Whitmer said that “everything Joey is saying is 100% true.” That seems to clearly be what Koff is referencing in the email above as the reason why Klein is being let go.

I’m scared I will get in trouble for saying something in public about it.
But the reports I’ve seen are wrong.
He is the best coach I ever had. I partly stayed there so I could keep learning from him. He looked out for us and he tried to make it better.

Maybe someone will finally listen and let me and others help make things better.

Klein is a three time ROH Women of Honor World Champion and has held the title since October 12.

I was right to be afraid. But there is no courage without fear.

It was worth it for the chance to finally force some positive change. https://t.co/u4ZKUPycb7