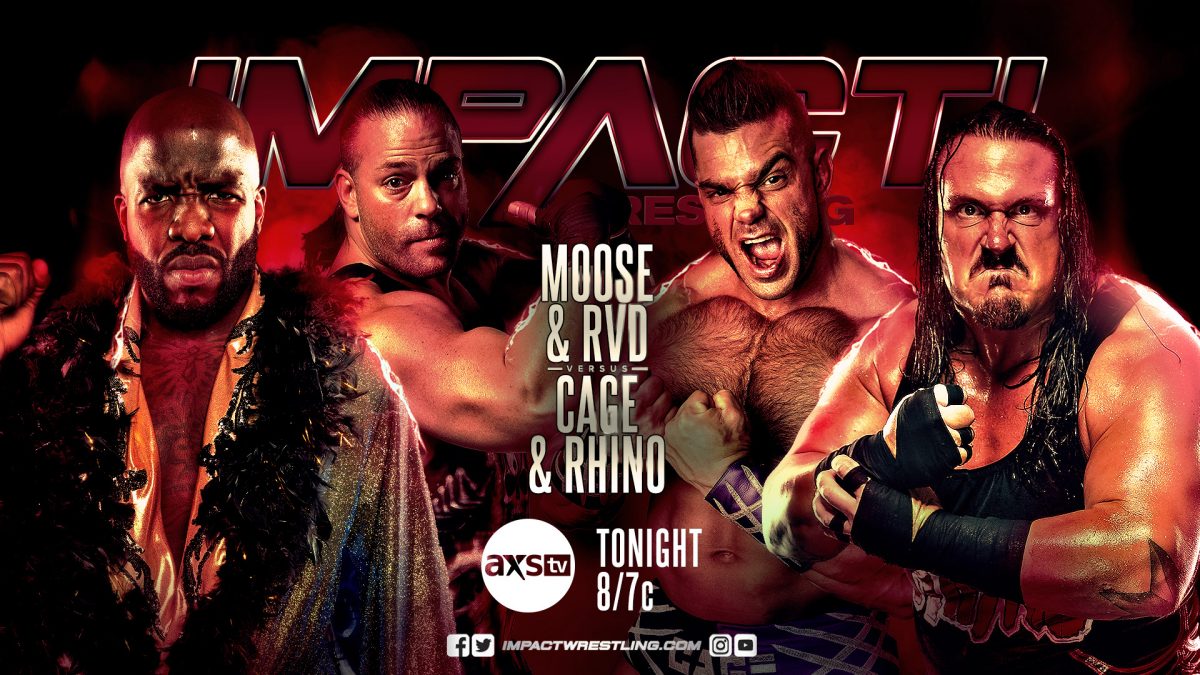 Elgin pulls Eddie up and over his head, slamming Eddie to the mat. Eddie counters a vertical suplex attempt into a vertical suplex of his own. Eddie hits a top rope Hurricanrana, followed by the Blue Thunder Bomb for a near fall. Elgin catches Eddie in mid-air and connects with a Uranage. Both men exchange chops and strikes in the corner, neither one backing down. Elgin hits a German Suplex but Eddie comes right back with the Boston Knee Party. Eddie hits a Sunset Flip Powerbomb but it’s not enough. Elgin finally puts Eddie away with a thunderous Elgin Bomb.

Now that Elgin has defeated Eddie twice, Eddie must put his Call Your Shot Trophy on the line when these two clash one more time this Sunday at Hard To Kill.

Gama mistakenly hits Raj when he was aiming for Daga on the floor. Fallah runs the ropes but gets tired. Luckily, he falls right on top of Rohit for a two count. Rohit regains momentum when he plants Daga face first into the mat. Daga sidesteps a charging Raj, sending him crashing into his own parter Rohit. TJP connects with a springboard forearm to Raj. Daga takes out both Shera and Rohit with a Hurricanrana arm drag. Daga soars through the air, crashing into all three members of the Desi Hit Squad on the outside. The big man Fallah is next to fly as he collides with the Desi Hit Squad. Raj trips up TJP from the outside, allowing Shera to hit Sky High for the win.

Backstage, Willie Mack tells Rich Swann he doesn’t want to drag him down anymore. Willie says he may not be able to make their Tag Team Championship opportunity against The North this Sunday at Hard To Kill because he’s banged up. Swann shuts him down and says they do things together. Willie comes to his senses and shakes hands with his long time friend.

On the oVe cam, the group previews their matchups at Hard To Kill. Sami Callihan prepares to put his World Title on the line against Tessa Blanchard while Madman Fulton goes one-on-one with Ken Shamrock.

Johnny Swinger slips pills into Joey Ryan’s water in an attempt to drug him. Tommy Dreamer catches him in the act and forces Swinger to drink the water as punishment.

We take a special look at the historic Sami Callihan vs Tessa Blanchard World Championship match this Sunday at Hard To Kill.

.@Tess_Blanchard vs. @TheSamiCallihan at Hard To Kill is one of the biggest World Title matches in IMPACT history.

This AMAZING special feature will have you counting the seconds to Sunday. #IMPACTonAXSTV pic.twitter.com/t74aJjD9QQ

Father James Mitchell locks Suzie in a room backstage so that she can’t get involved in the upcoming match.

Rosemary dives off the apron, hitting Havok with a Hurricanrana on the floor. Rosemary gets in the face of Mitchell. He calls for Havok to save him but Rosemary sidesteps, causing Havok to crash into Mitchell. Rosemary attempts a dive through the ropes but Havok cuts her off with a forearm. During the match, Suzie has somehow escaped from the room she was locked in and makes her way to ringside. Don Callis assists Suzie in putting on the headset as she joins him and Josh Mathews on commentary. Mitchell is furious and intimidates Suzie to leave the desk. Mitchell covers her eyes as Havok demolishes Rosemary with the Tombstone Piledriver to win.

Jordynne plants Madison face-first into the mat. Madison regains control with an Enzuigiri. Team Taya begins to wear down Jordynne until she’s able to build momentum and get the hot tag to ODB. Taya receives a Bronco Buster from ODB, then slams her to the mat in front of the corner turnbuckles. Jordynne hits Taya with a top rope splash and goes for the pin, but she’s not the legal woman. ODB throws Jordynne to the outside and scores a huge pin on the longest reigning Knockouts Champion of all time.

After the match, Jordynne and ODB get in each other’s face as Tenille tries to break things up.

Backstage, Moose tries to ensure that RVD will be on the same page with him in their tag match against Brian Cage & Rhino tonight. RVD doesn’t remember that he and Moose even had a match last Summer at Slammiversary. RVD reassures Moose that he’s here to win tonight.

Johnny Swinger is passed out after Tommy Dreamer forced him to drink the tainted water he intended for Joey Ryan earlier tonight. Joey wants to draw on his face and asks Petey Williams to get him a marker.

Cage and Rhino take Moose sky high with a double team back body drop. Rhino sets up for the Gore on RVD but Katie trips him up from ringside. RVD hits a running dropkick to take advantage of the distraction. Moose attempts a vertical suplex on Rhino but Rhino reverses and hits a vertical suplex of his own. Cage hits his RVD with a superkick, followed by a big German suplex. RVD teases going for Rolling Thunder but stops because he’s not going to give the fans what they want. Cage punishes RVD with an F5. Rhino connects with the Gore on RVD but when he attempts to do the same to Moose, he gets sent into the turnbuckle. Moose attempts a Five Star Frog Splash. Rhino avoids it and he hits Moose with a Gore. Cage follows up with a discus clothesline on Moose to win.

The final IMPACT! before Hard To Kill this Sunday goes off the air.