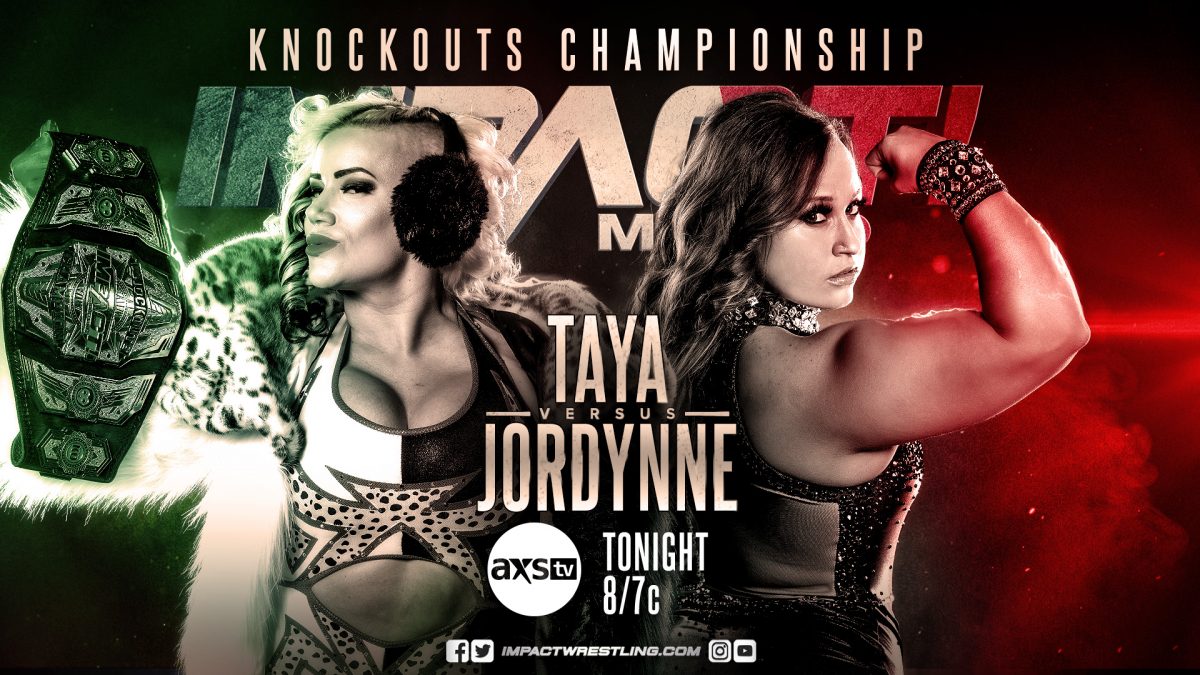 Eddie jumps off the top but Elgin counters into a sitdown powerbomb in mid-air. Both men exchange shots, Elgin gains the advantage with a Dragon Suplex, followed by a big running clothesline. Eddie hits a Tiger Bomb for a two count. Eddie sets up for the Boston Knee Party but Elgin retreats to the outside. Eddie follows him out with a dive to the floor. Eddie picks Elgin off the top, sending him crashing to the mat. Elgin connects with the Elgin Bomb to win, taking the 2-0 lead in the Best of 5 Series.

Gabby Loren interviews Knockouts Champion Taya Valkyrie ahead of her huge Title defense against Jordynne Grace in the main event tonight. It appears as though the pressure is starting to get to Taya.

.@TheTayaValkyrie has spent her entire title reign proving people wrong – she intends to do it once again in the main event against @JordynneGrace. #IMPACTonAXSTV pic.twitter.com/JOsVR2unUh

Daga attempts to take the big man off his feet in the early going. He succeeds with a dive through the ropes, taking out Fulton on the floor. Fulton uses his power advantage to regain control as he begins to wear Daga down. Daga hits a short DDT for a two count. Daga connects with a German suplex out of the corner, followed by a Death Valley Driver. Dave and Jake Crist of oVe make their way to ringside but get taken out by Daga. Fulton drops Daga on his head to pick up the win.

Rhino attacks Moose while he’s getting a massage. They’ll meet again in a singles match at Sacrifice, February 22 on IMPACT Plus.

.@TheMooseNation tried to get the "pain in his ass" massaged out, it didn't go to plan. #IMPACTonAXSTV @Rhyno313 pic.twitter.com/GdXyjhrEmK

Fallah hits a big belly-to-belly suplex. Fallah attempts a Samoan Drop on the apron but Alexander distracts him, allowing Page to gain control. Page takes Fallah down with running shoulder tackle. Fallah goes for the Banzai Drop but once again, Alexander gets involved and pulls his partner to safety. TJP has had enough and dives over the top rope into Alexander. Fallah rolls up Page to score the victory.

After what appeared to be the resurrection of Su Yung last week, Father James Mitchell and Havok encounter Susie in the backstage area. Mitchell is thrilled to see Susie, leading him to believe that Su Yung may not be back after all. Mitchell instructs Susie to follow them and when their back is turned, we see Su Yung make her presence known.

Susie and @realsuyung are now one. God help us all. #IMPACTonAXSTV pic.twitter.com/tkN58qMctA

RVD is stalling by making out with Katie instead of proceeding with the match. Joey sends RVD to the floor with a dropkick. RVD kicks Joey off the ropes as he tumbles to the mat. Joey dives through the ropes, taking out RVD on the outside. Joey gets RVD to touch it but RVD counters with one of his signature kicks. RVD hits the Five Star Frog Splash to win.

Su Yung has a noose around the neck of Father James Mitchell and is dragging him across the backstage area. Su chokes him out, causing him to wake up in the Undead Realm.

Finally..@MinisterReal is locked back inside the Undead Realm.. Father will have him punished for his failure..@FearHavok is left alone with the Bride @realsuyung..

Willie Mack tells Johnny Swinger not to come to ringside with him for his match against Shera.

Shera and Rohit have the 2 on 1 advantage on Willie when Johnny Swinger makes the save and evens the odds. The match is restarted as a tag team match.

The Desi Hit Squad wear down Swinger on their side of the ring. Swinger fights out of it, hits Rohit with a jawbreaker and tags in Willie. Willie hits Attack of the Mack on Shera in the corner. Willie connects with the standing Moonsault on Rohit. Swinger tags himself in and instructs Willie to go for a double team move on Shera. Willie wants no part of it and gets pulled out of the ring by Gama. Shera hits Swinger with Sky High to win.

Gabby Loren catches up with World Champion Tessa Blanchard about her Champion vs Champion Match against X-Division Champion Ace Austin at Sacrifice. Tessa calls Ace a scumbag when he interrupts. Ace talks about her not earning her father’s approval and gets a little too close, causing Tessa to deliver a beatdown until it’s broken up Reno Scum and the Rascalz.

Next week on the final IMPACT! before Sacrifice, Tessa will team with Trey and Tommy Dreamer to face Ace and Reno Scum in a six person tag team match.

"I kinda like a girl with daddy issues." @The_Ace_Austin was just asking for @Tess_Blanchard to punch him in the face. #IMPACTonAXSTV pic.twitter.com/lfJhaw6SZK

During an on-camera with Josh Mathews and Don Callis, there’s another mysterious technical glitch with the letters “ICU” appearing on the screen.

The world must listen to my message.

Jordynne sends Taya into the steel ring post, followed by a German suplex. Jordynne is perched on the top when Bravo gets involved behind the referee’s back and pushes her off. Taya distracts the referee as Bravo chokes Jordynne on the ropes. Jordynne begins to build momentum with a Spinebuster. Jordynne connects with the Grace Driver for a near fall. Taya hits a Powerbomb onto the steel steps. Taya sends Jordynne face first into the steel with a Road to Valhalla on the ramp. Jordynne almost gets counted out but makes it back into the ring at the referee’s count of nine. Jordynne hits a devastating Muscle Buster but Taya kicks out at two. Jordynne has the match won after a Grace Driver but Bravo pulls the referee out of the ring. Taya attempts to Spear Jordynne but catches Bravo instead. Bravo uses his body as a shield to protect Taya from a top rope splash. Jordynne connects with one final Grace Driver to win the match and end Taya’s historic reign as Knockouts Champion.