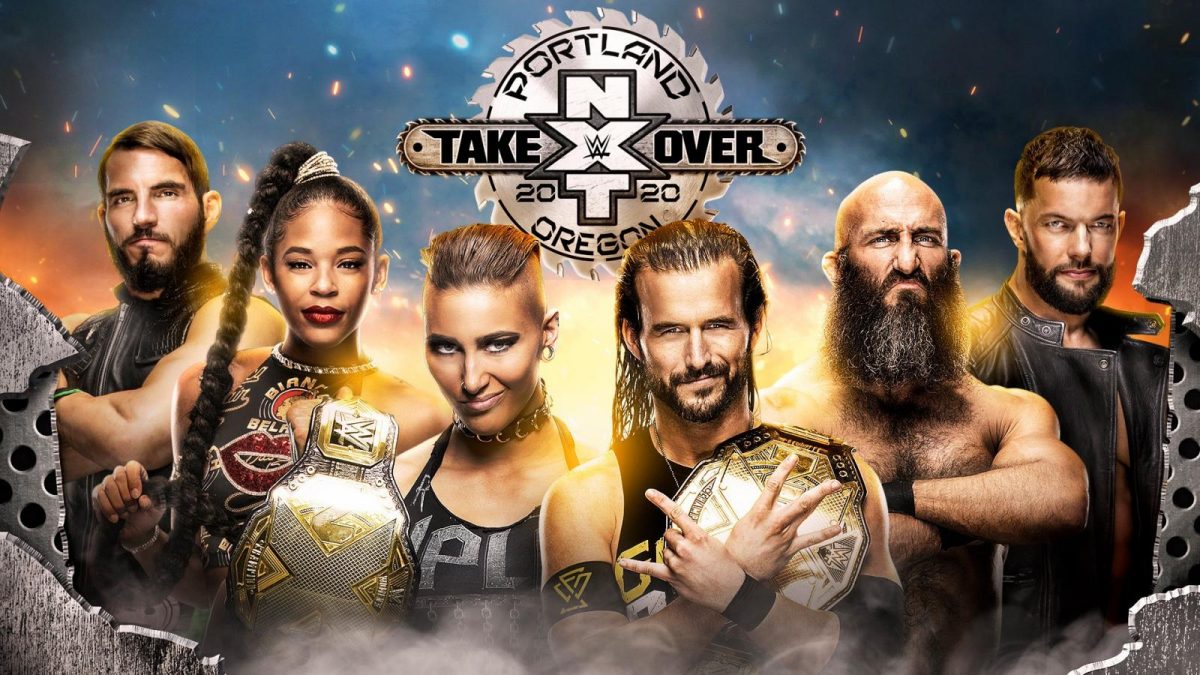 Poppy performed live to start the show, singing “Fill the Crown” and “Anything Like Me.” 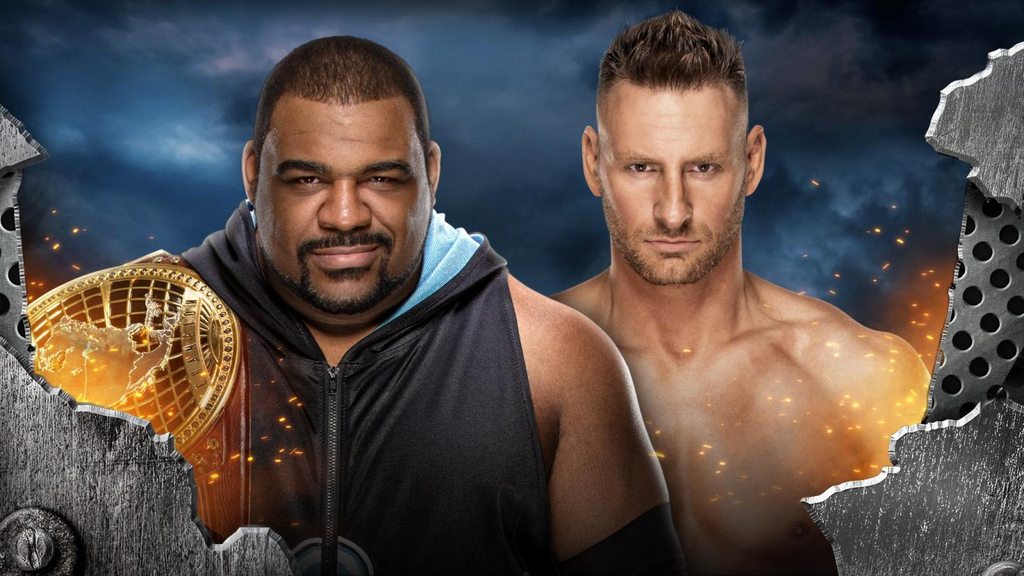 The crowd immediately chanted “Oh, bask in his glory” as the bell rang. Early on, Dijakovic tried a Fosbury Flop to the outside, but Lee caught him and was going to powerbomb him, but Dijakovic escaped.

Dijakovic controlled the match for a few minutes, then hit a Cyclone Kick followed by a cool corkscrew moonsault off the top, but Lee kicked out.

Later, they climbed to the middle rope and Dijakovic hit Lee with an avalanche Feast Your Eyes, but Lee kicked out.

Out of nowhere, Lee hit the Pounce and Dijakovic went flying, hitting his head on the bottom turnbuckle.

Later, Dijakovic sat Lee down on a seat near the announce tables, then went into the ring, jumped and did a springboard senton off the top rope onto Lee on the chair… holy shit.

Later in the ring, Lee hit Dijakovic with a Spirit Bomb but he immediately popped up. Lee followed it up with another… 1-2-no.

Later, Dijakovic hit a top rope Spanish Fly on Lee. He tried to lift him up for Feast Your Eyes, but Dijakovic’s back gave out. Lee picked him up and hit the “Big Bang Catastrophe” for the win.

This match was good, but it felt like 90% spots for Dijakovic. Lee wasn’t able to showcase much of his talent in this match.

After the match, Lee picked him up and they hugged in the ring. 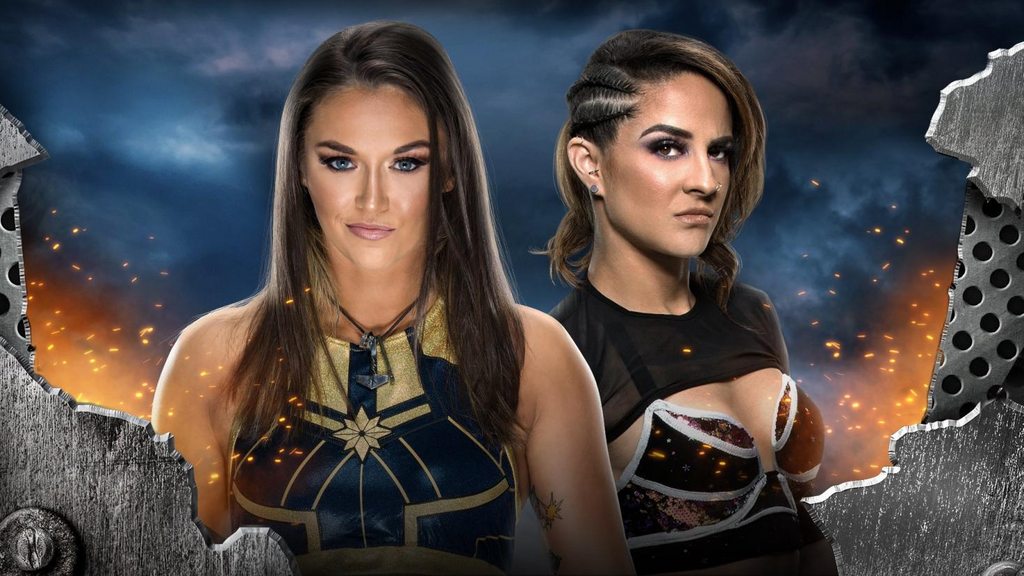 Kai attacked Nox as she was making her entrance and they brawled to the ring. A few minutes in, Nox hit Kai with a German suplex onto a trash can. Later, she hit a “Molly Go ‘Round” off the top, but Kai kicked out. Kai tossed a chair to Nox, then kicked the chair into her head.

Kai duct taped Nox to the ring post, then hit her with two kicks. Nox grabbed a laptop (?) from under the ring and smashed it into Nox’s surgically repaired knee. Tegan then grabbed a big chain from under the ring and hit Kai’s knee with it, then tried to take off her knee brace. She put Kai’s leg inside of a chair and stomped on it… Shiniest Wizard by Nox… But she said “I’m not done yet.”

Nox grabbed a table and set it up in the ring. She put Nox on it, then put a chair on Nox’s head. She was going to Pillmanize her off the top rope, but suddenly, Raquel Gonzalez from the Mae Young Classic ran in and attacked Nox. She grabbed Nox, picked her up and tossed her off of the top onto the table hard, but the table didn’t break.

Dakota went to pin Tegan and the ref counted to three.

After the match, Gonzalez helped Kai up and walked with her to the back as Tegan was left lying in the ring. The commentators wondered what Gonzalez’s motivations were for the run-in. 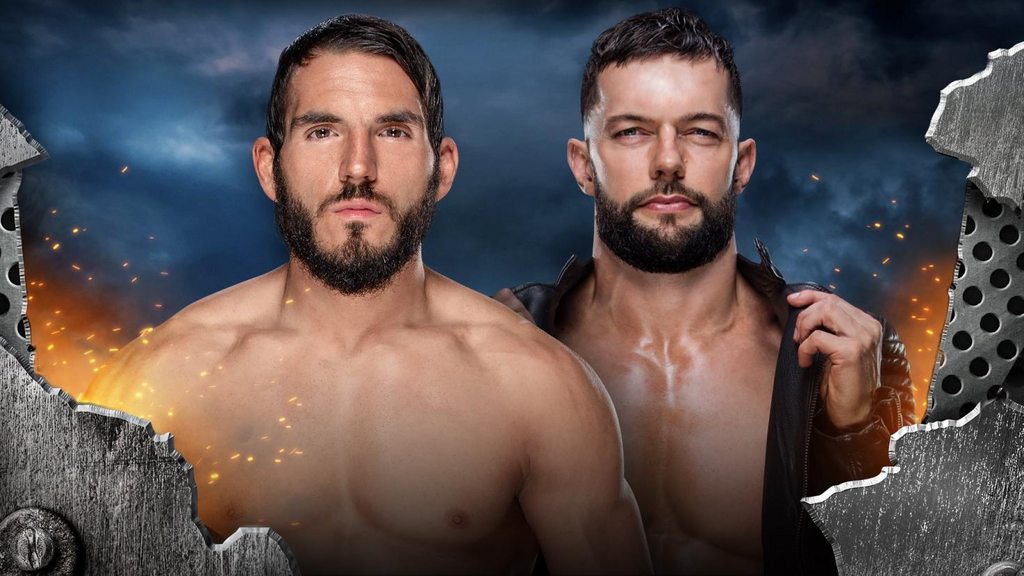 The first several minutes of this match were pretty slow, with Balor mostly dominating and working on Gargano’s left knee.

A few minutes later, Gargano hit the Lawn Dart on Balor. Later, Balor tried a Coup de Grace, but Gargano moved and hit Balor with a DDT for a near fall.

This match was fine, but really felt like barely anything happened until the last 5-10 minutes, which is usually not very fun to watch. 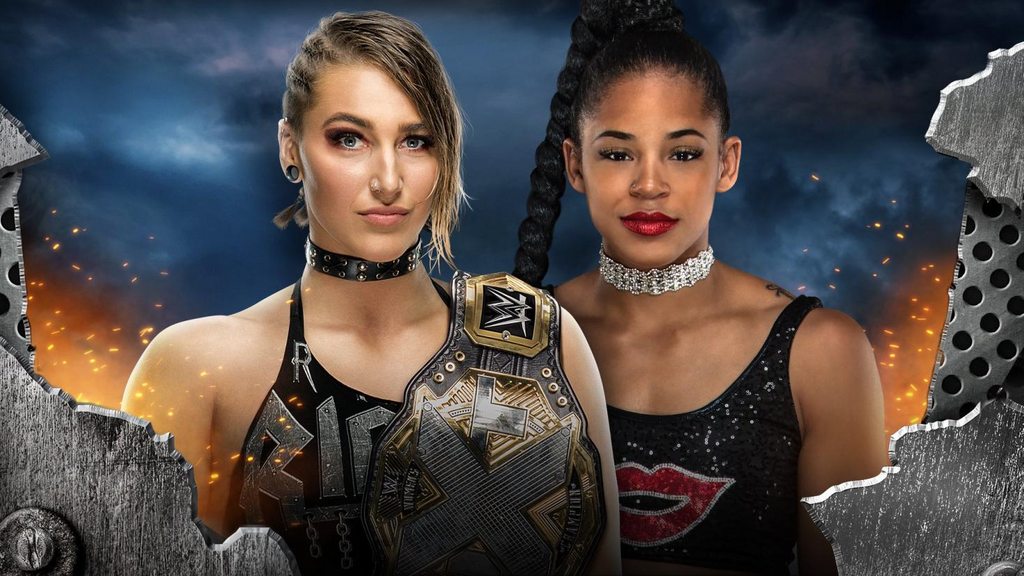 A few minutes in, they started exchanging blows near the top of the ring. Belair picked up Ripley and gorilla pressed her down, then went for the KOD, but Ripley escaped.

Ripley ran at Belair, but she gave her a huge back body drop, sending Ripley dangerously to the outside. Belair then flipped over the top onto Ripley.

Later in the ring, Belair punched Ripley in the corner, but Ripley escaped from between her legs, then hit her with the Riptide. 1-2-3. Kind of an abrupt finish that felt flat.

As Ripley was celebrating in the ring, Charlotte Flair came up from behind and attacked her. She grabbed a mic and said, “So I thought about it and I’ll see you at WrestleMania.” She then hit Ripley with Natural Selection, then held up the NXT Women’s Championship.

On her way out, Charlotte also grabbed Bianca Belair and tossed her into the ring steps. 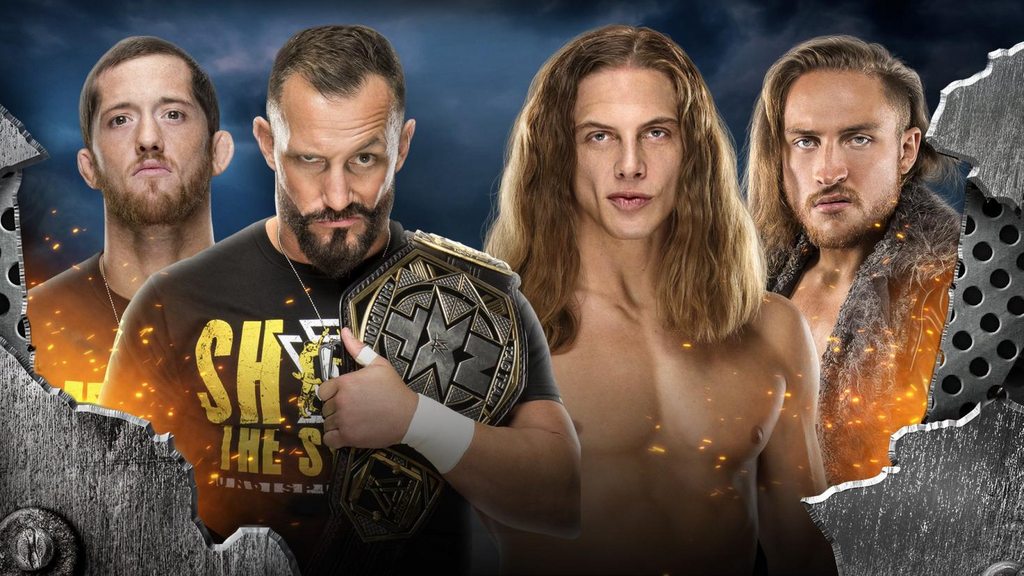 Riddle and Dunne arrived on the Broserweight Mobile. Riddle got on the mic and started singing, “The Broserweights got one question. How much fish could Bobby Fish fry if Bobby Fish could fry fish?” Fish and O’Reilly ran down to the entrance ramp and they all started brawling.

Fish and O’Reilly beat down on Dunne for a few minutes until he finally tagged in Riddle, who hit a flurry of sweet suplexes on UE.

Dunne hit a twisting moonsault to the outside onto Fish, then tried to kick him, but Fish ducked and Dunne kicked the ring post. In the ring, Riddle hit more sweet suplexes on O’Reilly. Riddle tried to suplex O’Reilly but Fish chop blocked him.

Later, after a lot of fast-paced action, Fish hit Riddle with an avalanche suplex off the top, then O’Reilly locked on a leg lock. Dunne came off the middle rope and stomped on O’Reilly’s fingers to break it up though.

Later, O’Reilly shoved Dunne into Riddle, knocking Riddle off of the apron. Dunne “snapped” O’Reilly’s fingers. Riddle ran in and tried to spear O’Reilly, but O’Reilly pulled Dunne in front of him and Riddle speared his own partner! UE knocked Riddle out of the ring then hit Chasing the Dragon on Dunne, but he kicked out!

Riddle was able to tag himself in and the Broserweights hit a flurry of doubleteam offense on UE. Riddle picked Fish up in a fireman’s carry, then tossed him in the air and Dunne kicked Fish in the head. 1-2-3!

Easily the best match of the night so far. 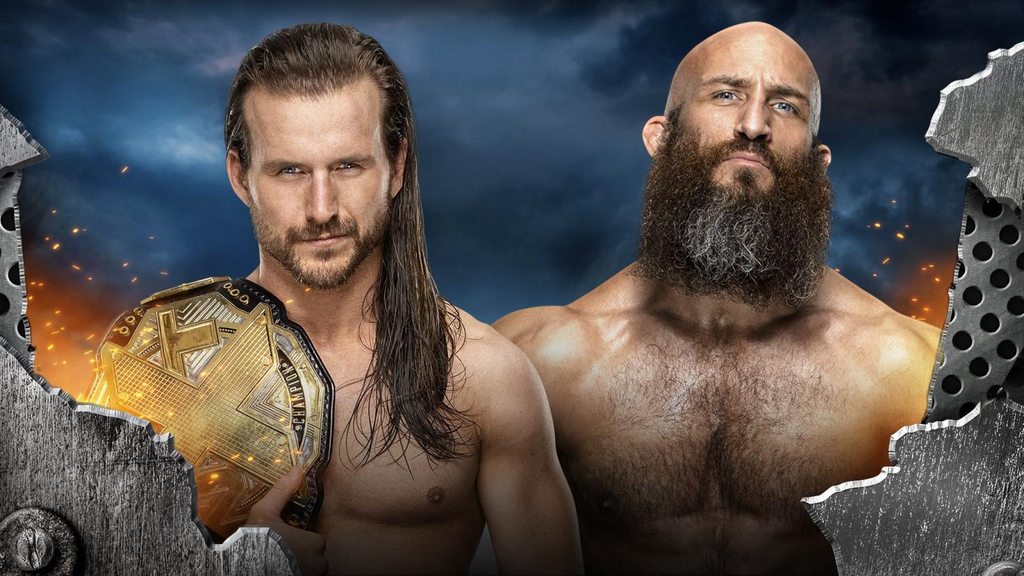 A few minutes in, Cole hit a brutal wheelbarrow slam on Ciampa, swinging him up and smashing his back on the corner of the announce table. Cole then hit a neckbreaker and continued to work on the surgically repaired neck of Ciampa.

On the outside, Ciampa hit Cole with a vicious powerbomb onto the announce table. Ciampa picked him up again and powerbombed him a second time, this time breaking the table.

In the ring, Ciampa pulled down his knee pad and went for a running knee, but Cole nailed him. But Ciampa got up and clotheslined him, then hit Project Ciampa… 1-2-no!

Later, Cole hit Ciampa with a piledriver and an ushigoroshi, but Ciampa kicked out. Superkick by Cole, and another to the back of the neck. The Last Shot by Cole! But Ciampa rolled over to the bottom rope to safety.

Cole jumped off the middle rope, attempting to hit a Panama Sunrise onto the apron, but Ciampa blocked it again, hitting an Air Raid Crash on the apron!

Cole was able to recover on the outside though, climbed onto the announce table and hit the Panama Sunrise on Ciampa on the outside!

He rolled Ciampa into the ring then climbed through the ropes, but Ciampa hit a draping DDT! Fairytale Ending by Ciampa! 1-2-no! Awesome match…

Roderick Strong suddenly ran out and stood onto the apron, distracting the referee. On the outside, Fish and O’Reilly ran out and hit the High/Low on Ciampa, then rolled him into the ring. 1-2… Ciampa kicked out!

Cole went for the Last Shot, but Ciampa tossed him over the top onto O’Reilly and Fish… then hit Strong with a draping DDT. Corkscrew Pescado over the top onto the Undisputed Era. He rolled Cole into the ring, but Cole hit him with three superkicks. Last Shot by Cole! And Ciampa kicked out again!

Fish put the NXT title in the ring in the corner and O’Reilly distracted the ref. Cole tried to hit Ciampa with the belt, but he moved, but Ciampa was knocked into the ref, taking him out. O’Reilly and Fish jumped into the ring but Ciampa took them out. Fairytale Ending by Ciampa, but there was no referee.

Johnny Gargano came down to ringside. Ciampa tried to pick up the NXT title, but Gargano grabbed it from him, then nailed Ciampa in the head with the belt! Cole pinned Ciampa… the ref came back to life… 1-2-3.

Undisputed Era celebrated together as Ciampa lied in the ring looking shocked and the show went off the air. Awesome match.