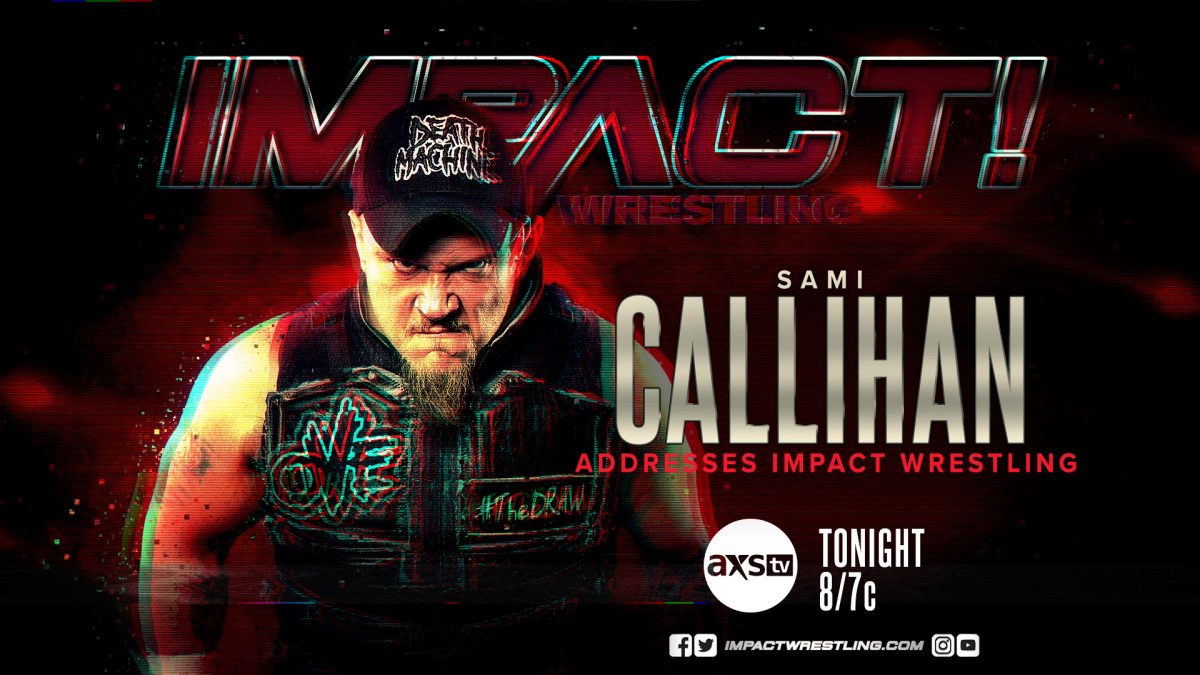 Before Eddie Edwards competes against both Tessa Blanchard and Michael Elgin with the World Title on the line at Rebellion, he steps in the ring with one half of the Tag Team Champions, Josh Alexander on IMPACT! Eddie begins to build momentum with one of his signature dives to the outside. Alexander hits a thunderous spinning slam for two. Both men willingly exchange chops in the middle of the ring. Eddie connects with the Tiger Bomb for a near fall. Page hooks Eddie’s leg from the outside, allowing Josh to capitalize off the distraction and roll up Eddie to win.

After the match, The North commence a 2-on-1 beat-down on Eddie. World Champion Tessa Blanchard makes the save. Tessa and Eddie stand tall but at Rebellion, they will be opponents with the World Championship on the line.

Backstage, Ethan Page is furious that Tessa stuck her nose in The North’s business just moments ago. Ethan challenges Tessa to a singles match later tonight.

Kylie Rae returns to an IMPACT Wrestling tonight. Cassandra blindsides Kylie while she’s making her entrance to gain the early advantage. Kyle quickly turns things around with a flurry of shots, followed by a strong forearm. Kylie connects with the Kylie Special superkick combination but Cassandra kicks out at two. Kylie forces Cassandra to tap out with a submission, awarding her the victory.

Jimmy Jacobs interviews Kylie Rae on her way back through the curtain. Kylie says that this is her new home and reveals that she has signed a long-term contract with IMPACT Wrestling.

Moose is in the ring as he continues to disrespect the TNA veterans. Kid Kash, who is scheduled for the TNA special later tonight, interrupts and praises Moose – but says he wouldn’t have made it in the old TNA. Moose dares Kash to prove his point. Kash accepts and an impromptu match begins.

Kash uses his speed advantage to catch Moose off guard in the opening moments of the match. Kash goes up and over, taking out Moose with a Hurricanrana on the floor. Moose shuts down the momentum of Kash with a huge No Jackhammer Needed Spear to win.

Jimmy Jacobs interviews IMPACT Wrestling’s newest tag team XXXL, comprised of Acey Romero and Larry D. They are going to prove that size matters. Fallah Bahh and TJP interrupt. Fallah is under the impression that they said “sides matter” and displays a tray of chicken by its lonesome. TJP offers XXXL the chicken as a welcoming gift but warns them to get to the back of the line in the tag team division.

And @MegaTJP and @FALLAH1 were the welcoming party. #IMPACTonAXSTV pic.twitter.com/ZnfXFZfwKZ

Jimmy Jacobs conducts an interview with Rich Swann who is recovering at home after an ankle injury sustained at Bash at the Brewery 2 in January. Swann says recovery is not going well and appears to be mentally unstable. Swann warns his tag team partner Willie Mack to watch his back as he prepares to challenge Ace Austin for the X-Division Title. Ace interrupts the interview and forces Jacobs off the set. Ace tells Swann that Willie was the weak link in their tag team. Ace plants seeds of doubt, questioning why Willie isn’t there assisting Swann with his recovery. Swann receives a knock on his door and Ace reveals that it’s his henchmen, Reno Scum. Swann is heard yelling as the interview cuts off.

Is there no low that @The_Ace_Austin won't sink to?

He sent his thugs Reno Scum to attack a recovering @GottaGetSwann. #IMPACTonAXSTV pic.twitter.com/xpjXB6BDb5

The ICU hacker Sami Callihan is in the ring. He says he realized what was important after losing the World Title to Tessa Blanchard at Hard To Kill. Callihan talks about legends competing in other wrestling promotions and how they take opportunities away from the young talent. Callihan claims he’s not going to allow Ken Shamrock to do the same in IMPACT Wrestling and that is why he attacked him with the fireball just a few weeks ago. Tommy Dreamer interrupts and says that veterans like him try to help the young talent learn from the mistakes they made. Callihan strikes Dreamer but Dreamer fights right back, leading to an impromptu Old School Rules match.

Old School Rules means there are no disqualifications, no count-outs and anything goes. In another sickening act, Callihan puts a toiler plunger over the mouth of Dreamer. Callihan connects with a modified low blow of sorts as he grips Dreamer low to prevent a Piledriver. Dreamer heads to the back and comes back with a garbage can, clobbering Callihan in the head with it. Both men trade staple gun shots in the middle of the ring. Dreamer avoids being driven into a steel chair and follows up with a cutter for two. Callihan connects with a Death Valley Driver through two chairs. Callihan puts Dreamer away with the Cactus Special Piledriver.

After the match, Callihan is about to deliver one final blow to Dreamer when Rhino makes the save. oVe quickly comes to the aid of Callihan as they gain the numbers advantage. Callihan and oVe lay out the extreme icons. As Callihan and oVe are about to celebrate, the lights go out. When they come back on, oVe is in the middle of the ring but Callihan is nowhere to be found.

Rosemary continues to come to grips with the loss of the bunny as she explains her situation to a mortal at the bar.

"Love made us weak – vulnerable."@WeAreRosemary plans to use people as she sees fit from now on. #IMPACTonAXSTV pic.twitter.com/R1hS5259DY

Susie reappears in the backstage area and attempts to introduce herself to talent and staff but everyone is terrified of her. Susie acknowledges that she is also Su Yung.

Well at least Susie knows why people are terrified of her. #IMPACTonAXSTV pic.twitter.com/zIWiG5k4Rh

Joey Ryan is now going by Joseph Ryan as part of his new identity in Cancel Culture. Deaner hits a big running elbow before taking a drink of beer from Cousin Jake. The slight distraction allows Joseph to rake the eyes of Deaner and take control. Joseph throws Deaner’s hat in his face but that only angers him. Deaner begins to build strength and momentum, culminating with a big clothesline. Jake pours beer in the mouth of Joseph behind the referees back. Deaner connects with his signature DDT to win.

Eddie Edwards thanks Tessa for having his back against The North earlier tonight. Eddie offers to return the favor in Tessa’s match against Ethan Page. Tessa respectfully declines and says she’s got this one.

.@Tess_Blanchard plans to go it alone without the assistance of @TheEddieEdwards in our main event. #IMPACTonAXSTV pic.twitter.com/PNka1QnNz3

Michael Elgin sends a strong message to World Champion Tessa Blanchard and Eddie Edwards ahead of their three-way collision for the World Title at Rebellion.

.@MichaelElgin25 looks to prove just how unbreakable he is and become IMPACT World Champion. #IMPACTonAXSTV pic.twitter.com/djwCr74ulG

Page grabs Tessa out of mid-air and overpowers her with a back-breaker. Page continues to use his strength to his advantage as he hits a vicious shoulder tackle. Every time Tessa tries to build momentum, Page shuts her down. Tessa finally gets something going with a Hurricanrana, followed by a series of dives to the outside. Tessa hits a thunderous tilt-a-whirl DDT for a near fall. Page counters Magnum into a modified bicycle kick for a near fall of his own. Josh Alexander attempts to trip up Tessa on the top rope but Eddie Edwards comes out to even the odds. Eddie hits Alexander with the Boston Knee Party on the ramp while Tessa connects with Magnum on Page. Tessa scores the pin to win.

After the match, Tessa and Eddie stare each other down, their eyes firmly set on the World Championship. Out of nowhere, Michael Elgin hits the ring and takes them both out with a double clothesline. Tessa and Eddie work together to hold the ring, sending Elgin to the outside. IMPACT! goes off the air.