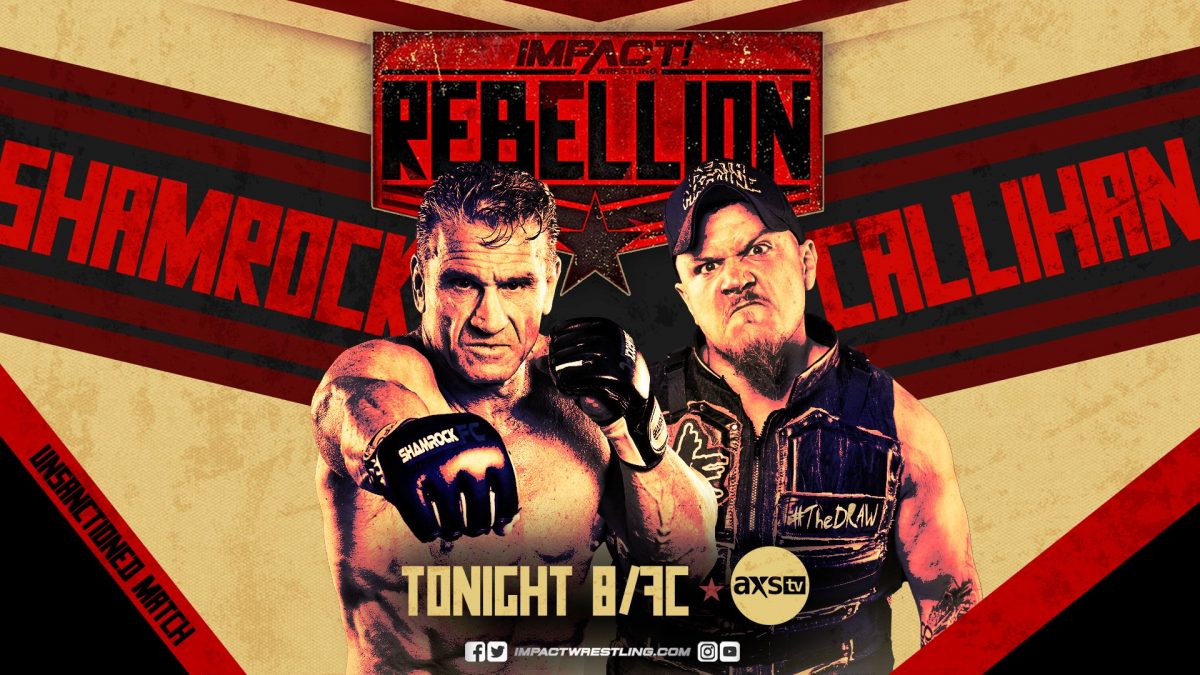 Rebellion kicks off with six-man tag team action. Tommy Dreamer and Rhino reveal their mystery partner to be the returning Crazzy Steve.

Dreamer and Jake square off. Jake gains control, taking Dreamer down to the mat. Dreamer attempts to nip up but can’t quite make it happen. Rhino and Steve give him the assist in completing the nip up. Steve cannonballs into Dave. Dreamer builds momentum with a big cutter to Jake but Fulton breaks up the pin attempt. Jake connects with a series of superkicks on Dreamer for one. Rhino mini-gores Dave in the corner, followed by a belly-to-belly suplex. Things break down as the referee loses control. Fulton catches Steve in mid-air and sends him crashing to the floor. Rhino clotheslines Fulton the outside. Rhino hits Dave with the Gore to win.

Josh Mathews reveals that World Champion Tessa Blanchard and Eddie Edwards were unable to make it to Rebellion. Mathews catches up with Eddie on FaceTime. Eddie tells him that it was not an easy decision to make but family comes first.

.@realjoshmathews talked to @TheEddieEdwards about Eddie’s extremely difficult decision not to compete at #Rebellion. pic.twitter.com/oZHwgMJtor

Backstage, Gia Miller interviews Michael Elgin after hearing the news that the World Title three-way match is off. Elgin claims that Tessa and Eddie were scared and did everything in their power to get out of it. Elgin makes a bold statement – he will be World Champion by the end of Rebellion.

“Years from now when people are looking back on champions in IMPACT Wrestling, Michael Elgin is going to be number one.” @MichaelElgin25 went from young prodigy to best in the world – but he NEEDS the IMPACT World Championship. #Rebellion pic.twitter.com/1p5EwZlFcA

Dez uses his amazing agility to gain control in the early going. The Rascalz hit TJP with double superkicks. Fallah hits Wentz with a splash but Acey breaks the pin. Fallah connects with a huge belly-to-belly suplex on Larry. The pace quickens as the Rascalz trip up Acey, causing him to collide with his own partner. The Rascalz are looking to finish off Larry but TJP pulls Dez out of the ring. Larry connects with a strong uppercut to TJP. Dez takes out Fallah with a handspring Pele. Acey hits Dez with a Pounce for a near fall. Dez connects with one final top rope corkscrew to put Larry away.

Reigning Tag Team Champions The North check in from Canada. They explain that they are unable to compete at Rebellion due to the border being closed.

“When they made the earth they put Canada on top of America.” @OfficialEGO and @Walking_Weapon plan to offer the best Canada has to offer a chance at The North. #Rebellion pic.twitter.com/7s9hqJOKFZ

Gia Miller interviews Willie Mack and Rich Swann ahead of Willie’s X-Division Championship opportunity against Ace Austin tonight. Swann pumps him up for one of the biggest matches of his career.

.@GottaGetSwann is here to support @Willie_Mack as Mack challenges for the X-Division Championship NEXT! #Rebellion pic.twitter.com/BJPNCI1VBM

Ace is the master of mind games and refuses to lock up with Willie from the opening bell. Willie doesn’t fall for it and follows the champ to the outside. Ace turns it around by trapping Willie in the Tree of Woe. Ace launches himself off the top but Willie catches him in mid-air. Willie hits a Samoan Drop, followed by a standing Moonsault. Willie begins to pummel Ace, forcing the referee to pull him off. Ace hangs up Willie on the ropes to gain control. Willie reverses a high-risk maneuver into a sit-down powerbomb for two. Willie hits the Stunner but Ace lands on his feet and immediately follows up with The Fold. Willie kicks out at two as Ace looks on in disbelief. Willie counters another Fold attempt into a super Stunner for yet another near fall. Willie goes Coast-to-Coast but instead of going for the pin, he crashes and burns with a Six-Star Frog Splash attempt. The referee stops Ace from using the ropes for leverage on a pin. Willie hits Ace with a unique Stunner on the top, followed by the Six-Star Frog Splash to win.

After the match, Rich Swann comes out to celebrate with his best friend and new X-Division Champion, Willie Mack.

Johnny Swinger congratulates Willie Mack in the backstage area but overstays his welcome.

Kylie almost locks in her signature STF, Smile to the Finish, in the opening moments of the match but Kiera gets to the ropes. Kylie hits running double knees in the corner. Kiera cuts off the Kylie Special with a mid-air forearm shot. Both women exchange superkicks in the middle of the ring. Kylie builds momentum with a series of clotheslines. Kylie connects with the Kylie Special but Kiera kicks out at two. Kiera hits a vicious roundhouse kick for a near fall of her own. Kylie forces Kiera to tap with Smile to the Finish (STF).

Callihan jumpstarts the match by hitting Shamrock with a dive before the opening bell. Callihan hits a vertical suplex on the outside. Shamrock drives Callihan into the steel ring post, followed by the guardrail. Shamrock launches himself off the stage, crashing into Callihan on the concrete floor. Callihan retreats to the backstage area. Shamrock falls into his trap as Callihan attacks him from behind with a steel chair. Callihan chokes his opponent with a chain. Shamrock turns the tide but gets blindsided by oVe members, Madman Fulton and the Crists. Fulton repeatedly kicks a steel garbage can into the back of Shamrock. Callihan shockingly fights off his former brothers from oVe. Both Callihan and Shamrock agree to finish the fight outside in the parking lot. Callihan attempts a sleeper but Shamrock fights if off. Shamrock locks in his signature Ankle Lock. Callihan will not tap but eventually passes out due to the pain.

Night One of Rebellion goes off the air. Don’t miss Night Two next Tuesday at 8/7c on AXS TV featuring:

– Suicide vs. Chris Bey vs. Trey vs. Rohit Raju in an X-Division four-way match
– Joseph Ryan vs. Cousin Jake
– Rosemary vs. Havok in Full Metal Mayhem
– The future of the World Title revealed

#Rebellion continues with Night 2 TUESDAY at 8/7c on @AXSTV!