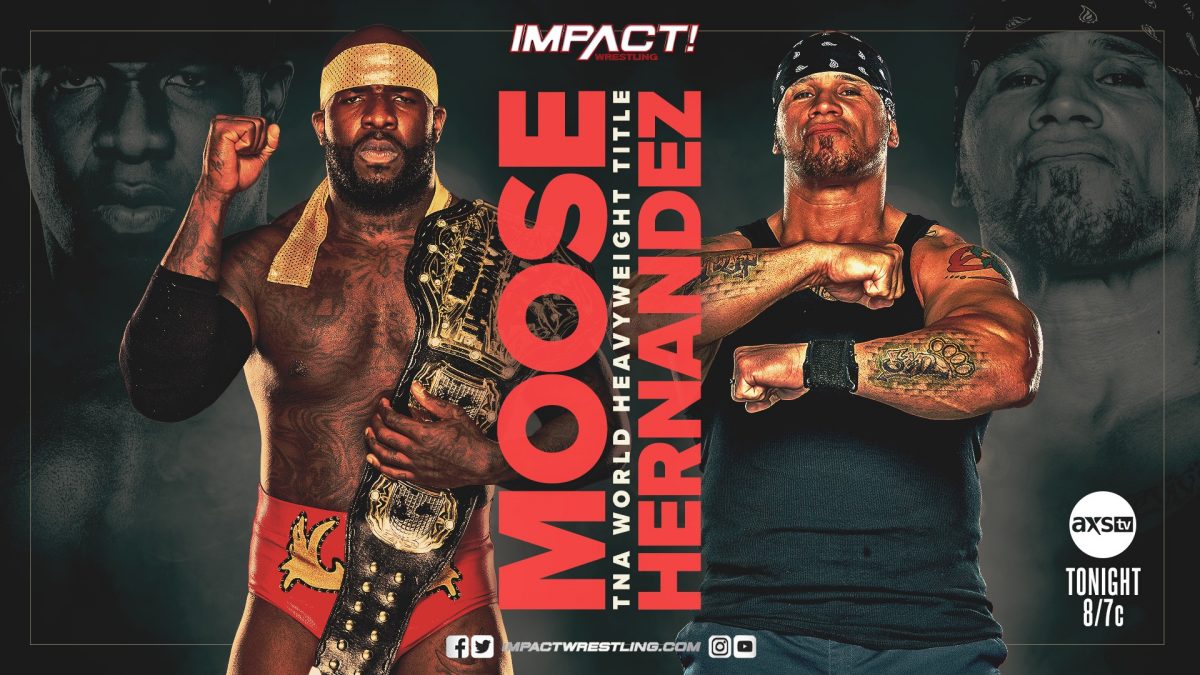 Before the Rascalz made their way through the curtain, Trey jokingly snuck up behind them. Trey reassured the world – he doesn’t believe it was Dez or Wentz who attacked him recently. Josh Mathews and Madison Rayne also reminded us that Ace Austin has been ruled out as a suspect after he was spotted elsewhere at the time of the attack.

The North continued to show why they’re the longest-reigning Tag Team Champions in IMPACT history with a flurry of impressive double-team offense. The Rascalz turned things around as Wentz connected with a running Destroyer on Alexander. Page shut down their momentum by catching Dez in mid-air and sending him into the steel guardrail. The North connected with their signature finisher on Wentz to retain the Tag Team Championships.

After the match, The North were furious that nobody in the locker room was watching.

Trey was once again attacked in the backstage area while Dez and Wentz were competing moments ago. Their prime suspects – Reno Scum.

Eddie Edwards confronted Ace Austin about the attack but was held back by security.

Neveah made her in-ring debut on IMPACT! as she looked to avenge Havok’s pair of losses to the vicious Kimber Lee. The new duo of Kiera Hogan and Tasha Steelz were also spotted watching the match from the other side of the guardrail. Kimber Lee targeted the recently reconstructed knee of Neveaeh in the early going. Nevaeh turned the tide with a brutal German suplex for two. Nevaeh hit a modified DDT to pick up the win.

Post-match, Kiera Hogan and Tasha Steelz threw popcorn at Havok in an attempt to provoke the terrifying Knockout.

A group of staff were watching Ken Shamrock’s Greatest Hits on IMPACT Plus when The North destroyed their iPad for not watching their match from earlier tonight.

Next week, Cancel Culture will battle Crazzy Steve and two mystery partners in a six-man tag team match and both sides previewed the bout.

Before the match could begin, Rohit Raju attacked Rhino from behind as revenge for Rhino hitting the Gore out of nowhere last week. Rohit was in firm control until Rhino began to build momentum with a big suplex. Rohit launched himself off the top rope but Rhino ducked, allowing him to connect with the Gore for the win.

Jimmy Jacobs questioned Michael Elgin on whether or not he attacked Trey earlier tonight. Elgin reminded him that when he attacks someone, he sends them to the hospital.

Susie contemplated returning to her dark side because she believes that every time she’s good, she gets walked on. Kylie Rae tried to persuade her otherwise when Taya Valkyrie showed up and bullied the two friendly Knockouts.

Self-proclaimed TNA World Heavyweight Champion put his “Title” on the line once again, this time against TNA veteran, Hernandez. The former member of LAX was hot from the start, taking Moose over the top rope with a huge clothesline. Moose showed off his athleticism as he drop-kicked Hernandez off the top to the floor. Back and forth they went as Hernandez connected with a strong back-breaker for two. However, Moose remained one step ahead of Hernandez when he went low with a kick, then hit the Lights Out Spear to win.

After the match, the music of former TNA World Heavyweight Champion EC3 played throughout the arena as Moose stared on in disbelief. On July 18th at Slammiversary, you never know where future endeavors may lead.

Reno Scum revealed that they are no longer working with Ace Austin because he hasn’t paid them for months of watching his back. Dez and Wentz accused them of attacking Trey but that doesn’t appear to be the case. Before they stormed off, Reno Scum threw TJP and Fallah Bahh into the mix.

X-Division Champion Willie Mack and the Deaners enjoy a cold beverage while they wonder who Chris Bey and Johnny Swinger will recruit for six-man tag team action next week.

After The North retained their Tag Team Championships earlier in the night, these two larger-than-life teams were competing in an attempt to move up the competitive tag team rankings. Romero brought the fight to both members of Reno Scum, tossing Thornstowe over the top and hitting Luster with a Sidewalk Slam. XXXL made a Thornstowe sandwich in the middle of the ring but Luster cut off their momentum. Luster connected with a Spinebuster on Larry, followed by a double foot stomp from Thornstowe for three.

The speculation on new arrivals in IMPACT Wrestling continued as Johnny Swinger called a friend of his to see if they would join him and Chris Bey in the six-man tag against Willie Mack and the Deaners next week. When things didn’t go as Swinger expected, his plan B was to recruit what he called the ultimate weapon against Willie Mack.

Looks like Johnny Swinger will have to go to “the perfect” Plan B to find a partner for him and @DashingChrisBey. #IMPACTonAXSTV pic.twitter.com/0o0skXfM74

We learned about the history of Deonna Purrazzo from the Virtuosa herself. Deonna said that she wants to become Knockouts Champion and attacking Jordynne Grace last week was just the first step towards achieving her goal.

Gia Miller caught up with Jordynne Grace to get her reaction to last week’s attack by Deonna Purrazzo. In a shocking turn of events, Deonna struck again and locked in the devastating arm-bar.

Before Ace Austin and Eddie Edwards join World Champion Tessa Blanchard, Michael Elgin and Trey in the five-way World Championship main event at Slammiversary, they renewed their personal rivalry in a Street Fight on IMPACT!

Eddie Edwards didn’t wait for the bell to ring as he attacked Ace from behind to jump-start the match. There were plenty of weapons in this no-holds-barred brawl, including steel chairs, trash cans and more. Ace attempted The Fold on the ramp but Eddie reversed into a belly-to-belly suplex on a steel guardrail. Ace drove a steel chair into the face of Eddie with a sick springboard boot. Eddie was about to suplex Ace through a table when Ace cut him across the eyes with his laminated card. In a moment that was hard to watch, Eddie drove Ace back first into the legs of a table. Eddie was setting up for the Boston Knee Party when Madman Fulton attacked him out of nowhere. Fulton connected with a huge Chokeslam, followed by The Fold from Ace to win.

It became apparent that Madman Fulton is now aligned with Ace Austin – but was he the one that attacked Trey?

IMPACT! went off the air with another cryptic promo for Slammiversary. On July 18th, our world will change and a former World Champion will return.