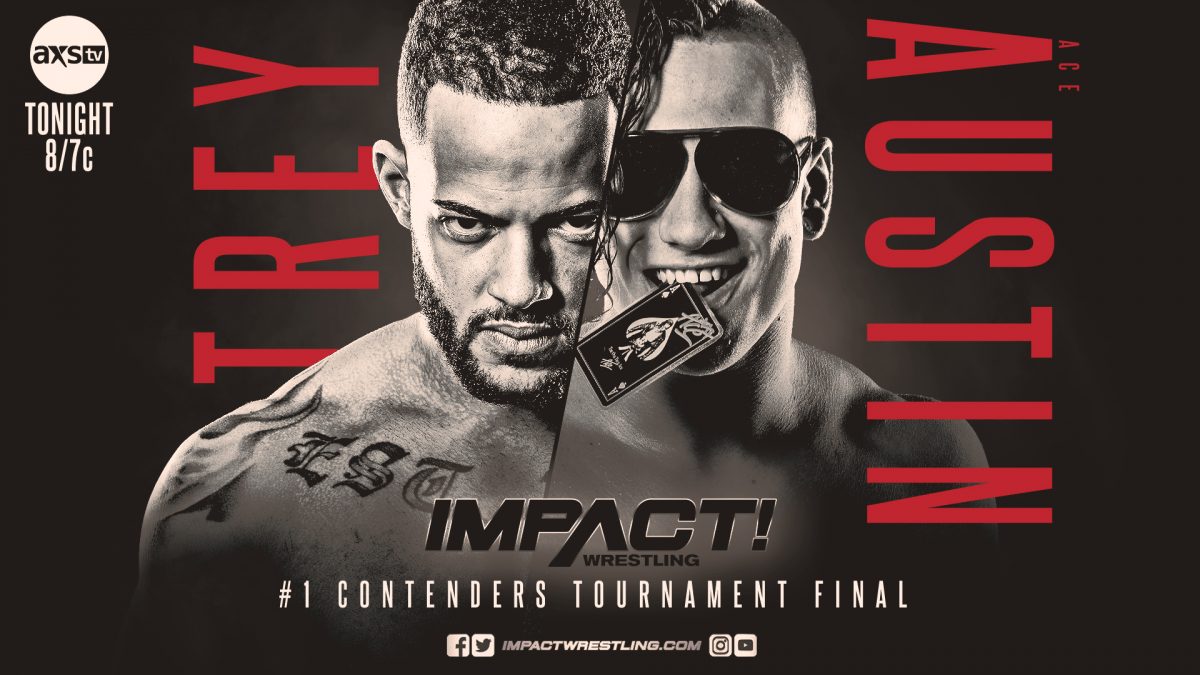 Last week, Kiera Hogan and Tasha Steelz sent a message to Kylie Rae when they attacked her in the backstage area – they are a force to be reckoned with in the Knockouts division. It was the dark and mysterious Susie who came to the aid of Kylie, but she too fell victim to the numbers game.

Kylie Rae and Susie had a chance at revenge when they met Kiera Hogan and Tasha Steelz in tag team action. In the early going, Tasha’s bad attitude was rubbing Susie the wrong way, prompting her to slap the Boricua Badass across the face. Kylie almost scored the victory when she hit Kiera with a devastating Kylie Special. As the match broke down, it was a double team flurry culminating with a swinging suplex from Kiera that put Susie down for three.

Gia Miller interviewed Ace Austin ahead of his match against Trey in the #1 Contenders Tournament Final. Moose interrupted and told Ace that if he wins tonight, he shouldn’t go after the IMPACT World Title because it’s second-rate. Instead, he should come after what Moose thinks is the most prestigious Title in IMPACT Wrestling, the TNA World Heavyweight Championship!

Joseph. P Ryan looked to cancel Crazzy Steve and transform him into Unwell Steven when they met in singles action. Accompanying Joseph to ringside was Dave and Jake Crist. Joseph invited them to observe how Cancel Culture takes care of their problems after the recent departures of Sami Callihan and Madman Fulton from oVe.

Joseph spent more time praising his own in-ring ability instead of continuing his attack and this allowed Crazzy Steve to gain control of the match. However, it was Dave and Jake Crist who ended up paying dividends in the end. As Jake preoccupied the referee, Dave distracted Crazzy Steve on the top rope. Joseph took advantage of the distraction, connecting with a devastating superkick to win the match.

After the bell, Joseph P. Ryan offered Jake Crist a spot in Cancel Culture – but not his brother, Dave. Joseph needed Jake to prove that he was willing to put Cancel Culture in front of everything and everyone, including his own brother. Jake did not hesitate, as he took out Dave Crist with a roundhouse kick. Jake Crist is the newest member of Cancel Culture.

Chase Stevens is a TNA original and former multi-time Tag Team Champion but now, he competes on his own. Rohit Raju is also focusing on his singles career as he moves away from the Desi Hit Squad, transforming himself into the Desi Hitman. Last week, Stevens goaded Rohit into challenging him to a match – and what a match it was.

During the match, Rohit claimed that he would not let Chase Stevens come into IMPACT Wrestling and steal his spotlight. However, it was too much trash-talking from Rohit that allowed Stevens to connect with a big scissors kick for two. As Stevens was building momentum, Rohit used the referee as a human-shield, halting Stevens in his place. Rohit capitalized with a top rope double foot stomp to steal the victory.

Post-match, Rohit Raju bragged to the camera about his victory but got caught with a Gore out of nowhere from Rhino!

Gia Miller interviewed the terrifying new duo of Havok and Nevaeh in the backstage area. Nevaeh said that her and Havok have been friends for year and after everything that Havok went through with Father James Mitchell, she came to IMPACT Wrestling to ensure she was okay. Nevaeh stated that Havok is dangerous on her own but when they’re together, they are a complete force. Havok and Nevaeh have arrived!

Chris Bey joined Madison Rayne and her co-host Johnny Swinger on a new episode of the hottest talk show on television, Locker Room Talk. Bey and Swinger have recently formed somewhat of an alliance as Bey continues to target X-Division Champion, Willie Mack.

Madison noted that Chris Bey was one of the hottest free agents in professional wrestling before signing with IMPACT. Instead of letting the guest speak for himself, Swinger repeatedly answered questions for Bey. As Madison’s aggravation continued to grow, Swinger revealed that he and Bey will face Willie Mack and Cousin Jake in tag team action next week. Their new team name? The Finesse and Bench Press Express.

After another good time together, Rosemary invited John E Bravo to come work with her and The Shadow. However, it was obvious that Bravo is still hung up on Taya Valkyrie, despite her treating him horribly. Just as Bravo was about to join Rosemary, Taya called and instructed him to pick up dog food for her. Whatever Rosemary had planned, it’s going to be harder than she thought to achieve!

Recently, The North have defended their Tag Team Championships in some of the most unique match-ups we’ve ever seen. What they haven’t been doing is defending against the most deserving of challengers – enter TJP, Fallah Bahh and the Rascalz. These teams are two of the hottest in IMPACT Wrestling today, both deserving of a title opportunity. However, only one team can challenge The North and they battled it out on IMPACT! to determine who that would be.

The pace of the match picked up in a hurry as both teams displayed their own creative forms of offense. The win almost came for the Rascalz when Wentz delivered a strong double foot stomp to TJP. Luckily for him, Fallah had his back and broke the referee’s count before three. TJP attempted his signature Mamba Splash, only to have Dez cut him off with knees to the gut. TJP had Dez in the ankle lock but in a fascinating finish, Wentz pushed Dez on top of TJP, leading to the pin and the win.

After the match, both teams displayed outstanding sportsmanship as they shook hands in the middle of the ring.

Enraged by his defeat to Trey last week in the #1 Contenders Tournament, Michael Elgin stormed to the ring and said he wasn’t leaving until IMPACT management made him the World Champion. Just like in his match with Trey, there was a brief interruption from the ICU hacker, Sami Callihan but this time, it doesn’t intimidate Elgin. In a shocking turn of events, Ken Shamrock returned after Elgin took him out of the #1 Contenders Tournament with a vicious backstage attack. Shamrock laid in the knees but before he could put in the Ankle Lock, Elgin escaped and retreated up the ramp.

Trey earned his spot in the finals of the #1 Contenders Tournament but when it was time for him to make his entrance, he was nowhere to be seen. Josh Mathews revealed a commotion in the back where Trey had been laid out by an unknown attacker. Confident that it was Ace Austin, Wentz ran to the ring for a confrontation. While Ace was denying his involvement in the attack, Scott D’amore came out and announced that Wentz would be replacing Trey in the match – ring the bell!

This was a side of Wentz we had never seen before as he put in a unrelenting attack on Ace. But his emotions quickly got the best of him which allowed Ace to capitalize and take control. Meanwhile, Wentz had just competed in a grueling tag team match earlier in the night. The fight spilled to the outside as Ace sent Wentz crashing into the steel guardrails. The beat-down continued for several minutes until Wentz fired himself up for one final attack. In the end, it wasn’t enough as Ace got his knees up on a Swanton attempt, then connected with The Fold to win. The winner of the #1 Contenders Tournament and next in line for a World Title opportunity – Ace Austin.

Slammiversary will take place on Saturday, July 18, live on PPV.