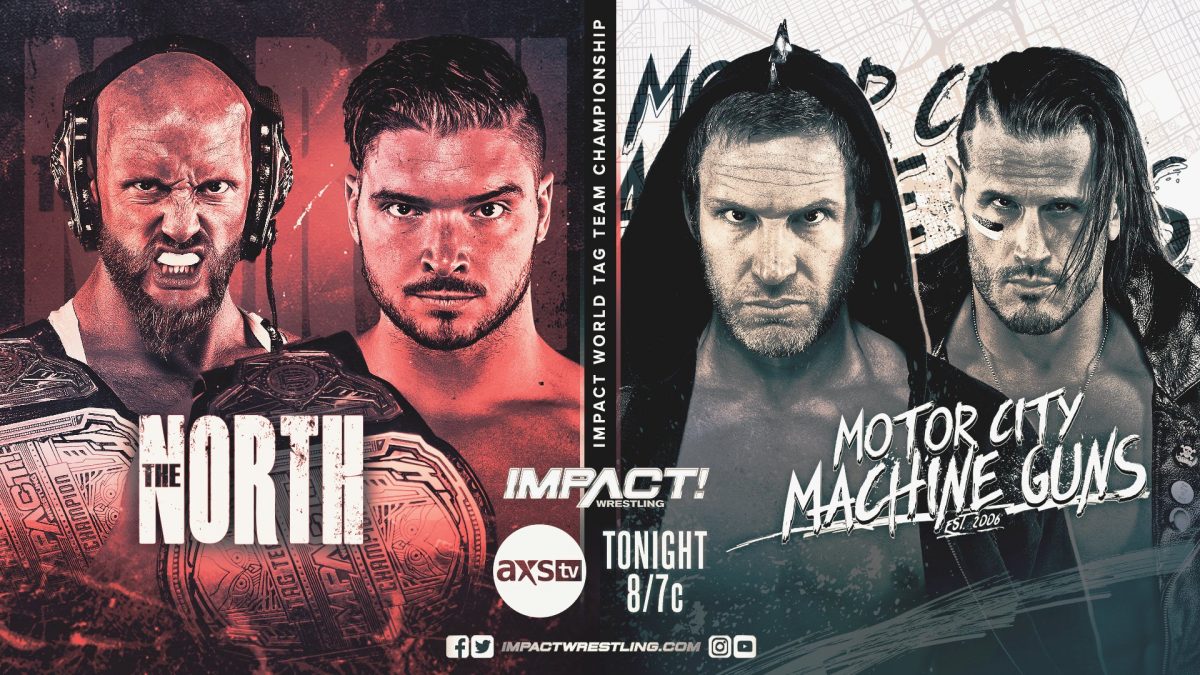 After Chris Bey won the X-Division Championship last Saturday at Slammiversary, Willie Mack receives his rematch tonight on IMPACT! Bey springboards to the outside but Willie catches him in mid-air, slamming him to the floor. Willie hits a standing Moonsault in the early going. Willie attempts a Stunner but Bey fights it off. Willie connects with a big forearm instead. Willie crashes and burns with the Six Star Frog Splash as Bey rolls to safety. Bey hits his signature springboard Cutter to win and retain the X-Division Title.

Heath arrives to the arena but he’s not on the security list. Heath calls his friend, Rhino but the big man doesn’t pick up because he’s in a heated altercation with Hernandez. Rhino and Hernandez are about to collide in a match where the winner will receive all the money from their arm wrestling contest.

Poor @HEATHXXII still can’t get in the building. #IMPACTonAXSTV pic.twitter.com/ELibeIIKov

Rohit Raju interrupts Chris Bey’s championship celebration backstage. Rohit toasts the new X-Division Champion and says that if he ever needs someone to watch his back, he can be that person.

These two teams have developed quite the rivalry over the last several weeks. Kiera and Tasha cut off the ring to wear down Nevaeh. Just when it looks like Nevaeh is building momentum, Tasha shuts her down with a bicycle kick. Nevaeh is finally able to make the tag but Kiera distracts the referee, causing him to miss it. Nevaeh has had enough and connects with a strong neckbreaker on Tasha, allowing her to tag in Havok. The Kaiju Queen hits a series of running knees on both of her opponents. Tasha pulls Nevaeh off the apron. Havok is about to Tombstone Kiera when Tasha hits her in the back with a steel chair, causing the disqualification.

After the match, the brawl continues. Nevaeh fights off Tasha with the steel chair while Havok connects with a Tombstone Piledriver on Kiera.

Sami Callihan confronts Ken Shamrock about losing their Tag Team Championship match to The North at Slammiversary. Shamrock says that he’s harder on himself than Callihan could ever be. Shamrock tells him that if he wants to talk, they can do it next week.

Nobody is more upset that they didn’t capture the World Tag Team Championships than @ShamrockKen. #IMPACTonAXSTV @TheSamiCallihan pic.twitter.com/0J2VCnmpqc

RVD and Katie Forbes talk about the plethora of changes in IMPACT Wrestling lately and the fact that Katie isn’t covering herself up anymore. Katie says that she has a new website and next week, the fans will get to see her photos for free.

“The fans want to see my body but I was trying to punish them and ended up punishing myself.”@TheKatieForbes and @TherealRVD are back on IMPACT! #IMPACTonAXSTV pic.twitter.com/ntio0ao94j

Hernandez turns his back to count the money that Rhino gave to the referee. After all, this match is for all the marbles from their recent arm wrestling classic. Hernandez turns around and gets caught with a Gore. Rhino scores the win and all the cash in quick fashion.

The North say that they had dominated all the competition in IMPACT Wrestling – until the Motor City Machine Guns arrived at Slammiversary. Ethan Page says that if they want to be the best team in the world, they have to beat them for their titles tonight.

The North plan to continue to prove they’re THE BEST in the main event against The Motor City Machine Guns! #IMPACTonAXSTV @fakekinkade @SuperChrisSabin pic.twitter.com/tCDFuZAAgI

The new arrivals to IMPACT Wrestling just keep on coming. Brian Myers (the former Curt Hawkins) appears in a vignette.

Did you think we were done at #Slammiversary? #IMPACTonAXSTV @Myers_Wrestling pic.twitter.com/aMrCC64mNK

Gia Miller interviews new Knockouts Champion Deonna Purrazzo after she defeated Jordynne Grace at Slammiversary. The new champ is confronted by Kylie Rae, who won the #1 Contenders Gauntlet on the same night. Kylie, as usual, is thrilled to be facing Deonna and offers her a handshake. Deonna takes her hand but quickly turns it into a devastating Armbar.

Eddie is in the ring and talks about defeating Ace Austin, Trey, Rich Swann and Eric Young in the Five-Way Elimination Match to become World Champion at Slammiversary. Eddie says he wants to be a champion that the world is proud of, a fighting champion. Eddie announces an open challenge where he will defend his Title every single week on IMPACT! Eric Young interrupts and Eddie berates him for re-injuring the knee of his friend, Rich Swann. Eric says that Eddie should be happy it wasn’t him who he attacked. Eddie has heard enough and charges through the ropes to attack. Eddie pummels him on the ramp before referees break it up. As referees are holding Eddie back, Eric gets in a cheap shot.

Gia Miller interviews self-proclaimed TNA World Heavyweight Champion, Moose. He “retained” his title over Tommy Dreamer in an Old School Rules match at Slammiversary. Gia asks Moose if he will take on all challenger for his title, like Eddie said he would for the World Title. Moose quickly declines, stating that his title challengers will be by invite only. Gia reminds him that there are many former TNA stars who have returned and could challenge for the title, like EC3. Moose says EC3 is busy and tonight, he’ll face Fallah Bahh instead.

Trey is the first to step up and challenge Eddie Edwards for a World Title match next week.

.@TheEddieEdwards said he’ll be a fighting champion and he’s backing it up.

Moose hits a big boot to gain control. Moose throws Fallah down to the mat, then follows up with a big elbow drop. Fall builds momentum with a series of running strikes into the corner. Moose turns the tide and connects with the Lights Out spear to win.

Moose is celebrating in the ring when EC3, who does not work for IMPACT, jumps him from behind. EC3 lays out the TNA World Heavyweight Champion before escaping over the guardrail.

The Good Brothers are confronted by Ace Austin and Madman Fulton in the parking lot. It turns out to be a distraction so that their hired guns, Reno Scum, could attack Gallows and Anderson from behind. The Good Brothers fight them off as Ace and Fulton speed off in their truck.

When Taya Valkyrie ruins Rosemary’s plan to spend some one-on-one time with John E Bravo, Rosemary decides to invite some other guests and throw a party. Wrestle House begins next week on IMPACT!

The Motor City Machine Guns are back after defeating The Rascalz in their Slammiversary open challenge and three nights later, they have a shot at the Tag Team Titles. The North begin to wear down Shelley. Page hits Shelley with a spinning backbreaker but Sabin breaks up the pin. Page hands Shelley off to Alexander who finishes with a delayed vertical suplex. Sabin gets the tag and quickens the pace, taking out Page with a missile dropkick off the top rope. Sabin follows up with a big springboard tornado DDT on Page. Sabin dives through the legs of Shelley, colliding with Alexander on the ramp. Shelley traps the arm of Page and locks in a crossface. Meanwhile, Sabin locks in a Cloverleaf on Alexander. Sabin goes for another springboard but Page traps him on the ropes. This allows The North to hit a cutter into a German suplex on Sabin. Shelley breaks up the count but immediately gets tossed to the floor. Sabin rolls up Page while Shelley fends off Alexander for the win. The Motor City Machine Guns have dethroned the longest-reigning Champions in IMPACT history.

Backstage, Heath is seen sneaking into the IMPACT Zone as IMPACT! goes off the air.