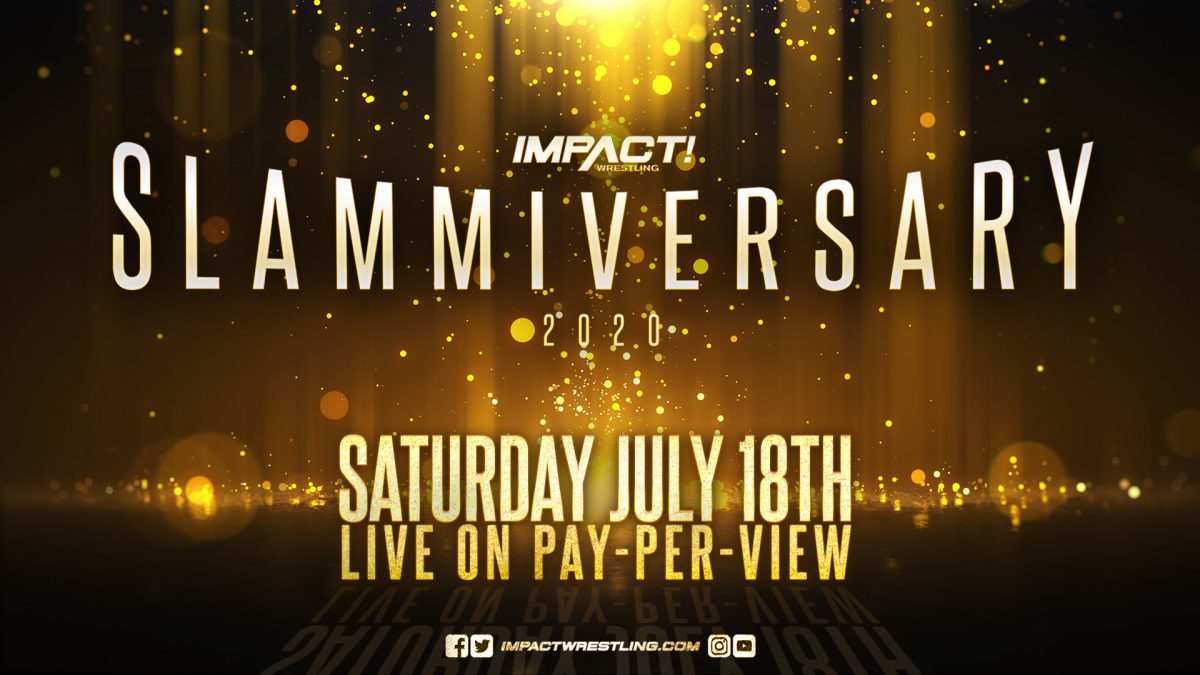 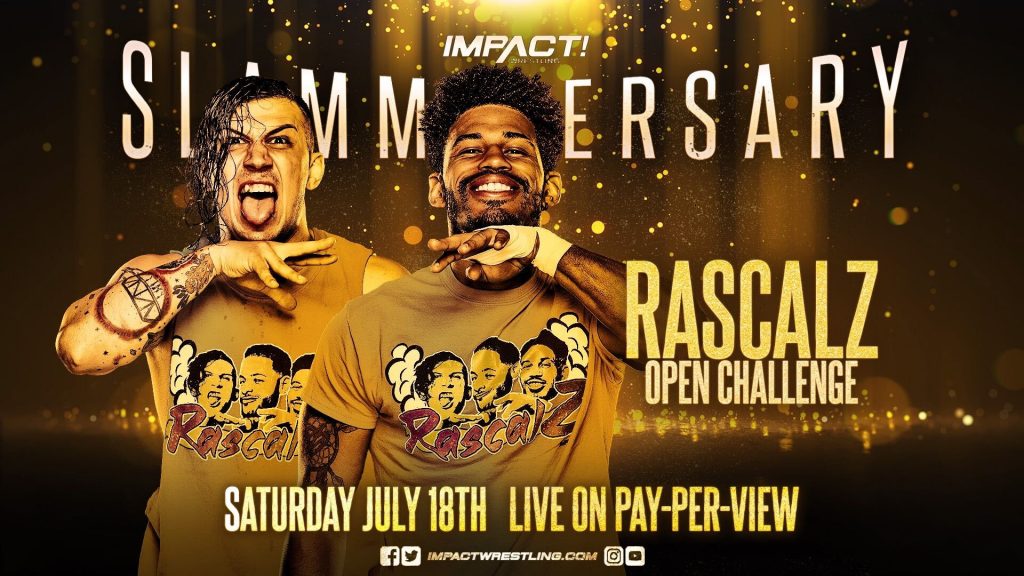 Shelley holds Dez on the floor while Sabin delivers a running kick from the apron. The Machine Guns wear down Wentz, showing off their unique double team offense. Sabin cranks the neck of Wentz, followed by a strong forearm from Shelley. Wentz turns the tide and makes the tag to Dez. He launches himself off the back of Sabin to take out Shelley on the apron. Dez sends Wentz soaring through the air with a pair of dropkicks for The Machine Guns. Wentz goes for the Swanton but Shelley gets his knees up. The Machine Guns have Dez beat but Wentz drives Shelley into the pin to break things up. Sabin and Shelley put Dez away with The Dirt Bomb to win.

Backstage, both Taya Valkyrie and Rosemary have separate conversations with John E Bravo and tell him that they must win the #1 Contender Knockouts Gauntlet tonight! 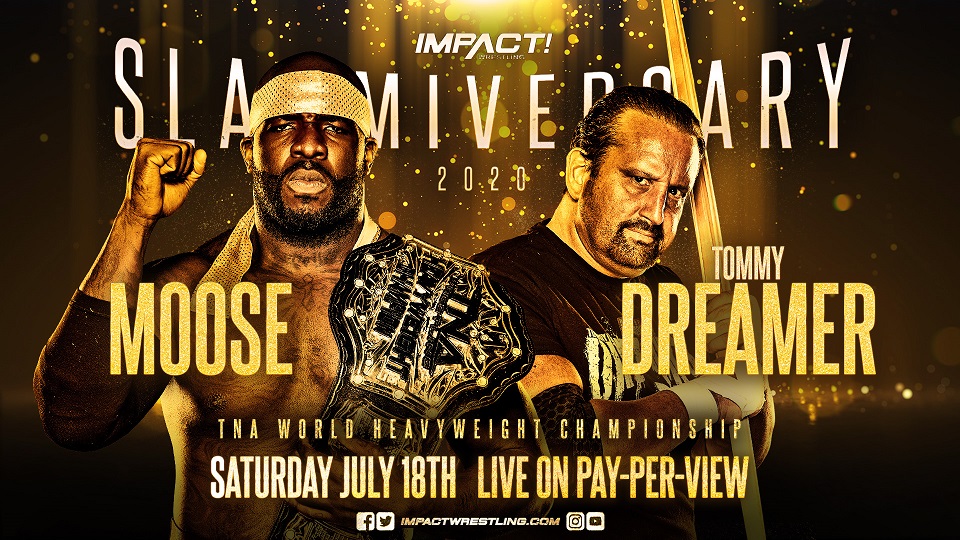 Old School Rules means anything goes as Dreamer hits Moose over the head with a trash can lid. Moose goes low as he drives Dreamer into the guardrail. Moose hits a vertical suplex on the steel ramp. Dreamer hits a Russian leg sweep with his signature kendo stick. Dreamer jumps off the top but Moose cuts him off with a sick mid-air dropkick.

Gia Miller is awaiting a new arrival to IMPACT Wrestling but instead, Johnny Swinger pulls up in a Jaguar and says the rental car was under the name “Anderson”.

#1 Contender Knockouts Gauntlet Match
Alisha Edwards vs. Havok vs. Kiera Hogan vs. Kimber Lee vs. Kylie Rae vs. Nevaeh vs. Madison Rayne vs. Rosemary vs. Susie vs. Tasha Steelz vs. Taya Valkyrie 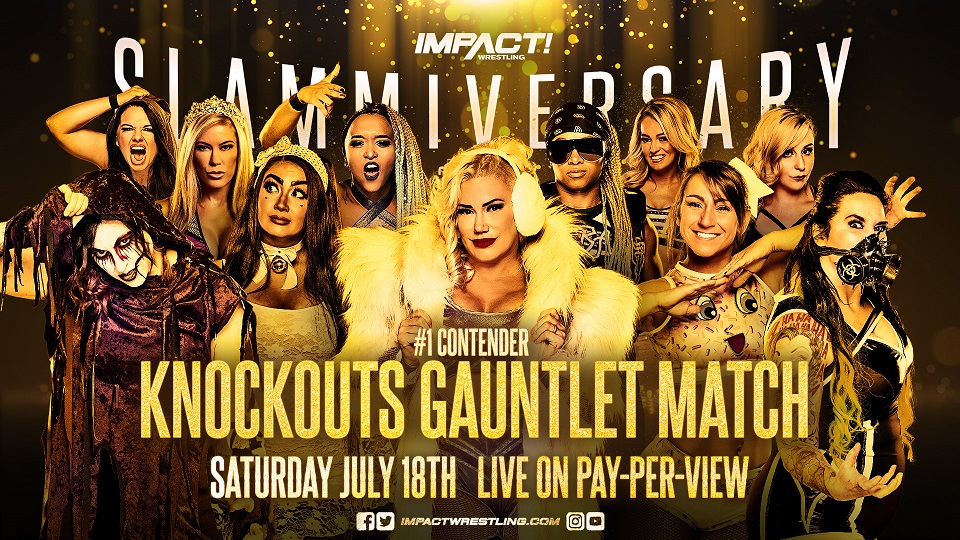 Tasha Steelz and Kylie Rae start the match. They will compete for two minutes, then the next Knockout will enter. Eliminations occur by throwing your opponent over the top rope. Taya Valkyrie’s music hits but John E Bravo comes out dressed as Wera Loca. He gets sent over the top for the quick elimination.

Knockouts will now enter every minute. Kimber Lee is out next, followed by Tasha’s partner, Kiera Hogan. Tasha and Kiera now have the advantage, being an established tag team. Susie enters the gauntlet, and she works together with Kylie to eliminate Tasha. Katie Forbes is a surprise entrant and twerks with Kiera before trying to eliminate her.

Madison Rayne enters the gauntlet and she squares off with Kiera. Havok is out next. Havok hits Kiera with a powerful swinging slam, followed by a Chokeslam to Kylie. This time, the real Taya Valkyrie enters the gauntlet. Alisha enters the match with a flurry of offense, hitting Taya with a big tornado DDT. Katie is eliminated as Havok throws Alisha into Kylie. Nevaeh joins her partner Havok in decimating their competition. Rosemary is the next entrant but moments later, John E Bravo re-enters the match dressed as the Demon Assassin. Meanwhile, Susie is eliminated. Taya accidentally strikes her friend, Rosemary. Havok was about to eliminate them both but Bravo saves them and throws her over the top rope. Madison is eliminated, followed by Alisha and Nevaeh. Kiera is next to get tossed to the floor. Kylie eliminates Lee with a clothesline. Rosemary locks in Upside Down on Kylie but Taya shockingly tosses her friend to the floor. The final two are Kylie Rae and Taya Valkyrie, the match will now end in pinfall or submission. Kylie connects with a huge superkick to win.

The surprises keep coming as Heath (formerly Heath Slater) jumps the guardrail. Rohit Raju interrupts but Heath makes a statement and takes him out!

.@HEATHXXII is HERE and he just taught @HakimZane a lesson at #Slammiversary! 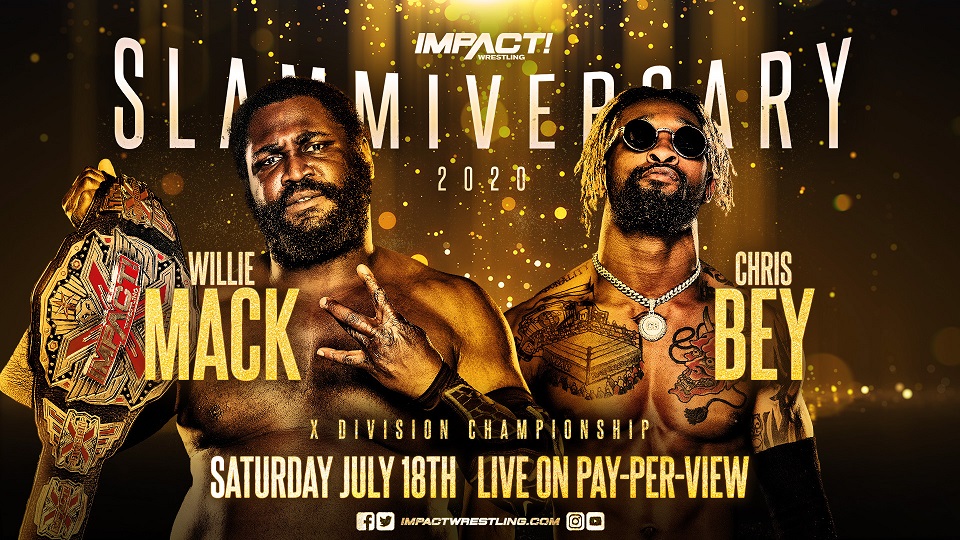 The X Division Title is on the line at Slammiversary! Willie hits Bey with a sick neckbreaker on the apron. Bey is perched on the top but Willie halts his momentum with a leaping dropkick. Bey regains control with a slingshot Slingblade. Bey uses his former friend Johnny Swinger’s finisher, the Swinging Neckbreaker.

Willie catches Bey in mid-air with a sit-down powerbomb. Willie hits the Exploder suplex into the turnbuckles. Willie connects with the Stunner but Bey avoids the Six-Star Frog Splash. Bey rakes the eyes, followed by The Art of Finesse to become the new X Division Champion!

Heath reunites with his former tag team partner, Rhino. Scott D’Amore confronts Heath and says that since he’s not under contract, he can’t be backstage. Scott asks him to leave. Rhino says he will figure things out and asks Heath to show up to IMPACT this Tuesday.

.@Rhyno313 and @HEATHXXII have reunited! #Slammiversary 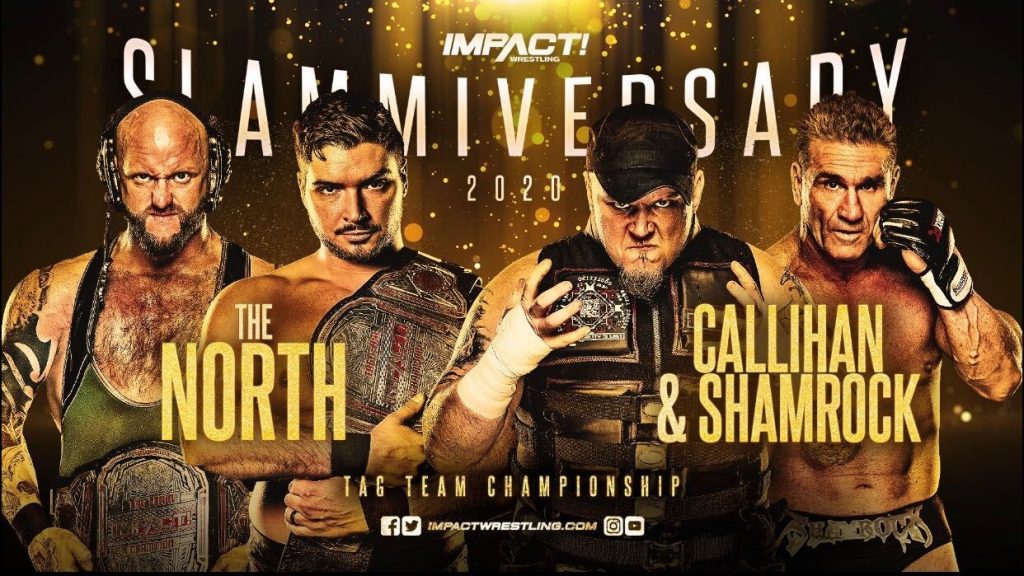 Can Shamrock and Callihan coexist and capture the Tag Team Championships or will The North continue their historic reign? Alexander and Shamrock square off in a submission battle to open the match.

The North corner Shamrock but he fights back with a double clothesline. Shamrock makes the tag to Callihan who goes on the attack. Callihan hits Page with a Brainbuster for two. Callihan and Page go back-and-forth as they take each other out with in-sync big boots. Both men make the tag and the pace quickens. Callihan quickly tags himself back in. The North take Callihan off the top with double team offense. Shamrock locks in the Ankle Lock on Page. Meanwhile, Alexander does the same to Callihan. Page pushes Callihan into Shamrock and they start to argue. Shamrock aims for Alexander but accidentally hits Callihan with a roundhouse kick. Shamrock sends Alexander flying with a super belly-to-belly suplex. Shamrock crashes and burns with a dive to the outside. The North put him away with their signature double team finisher to retain.

Gia Miller attempts to get an interview with The Good Brothers but inside the locker room is Rich Swann who is recovering from injury. He says that once he is cleared to compete, his eye will be on the IMPACT World Title. 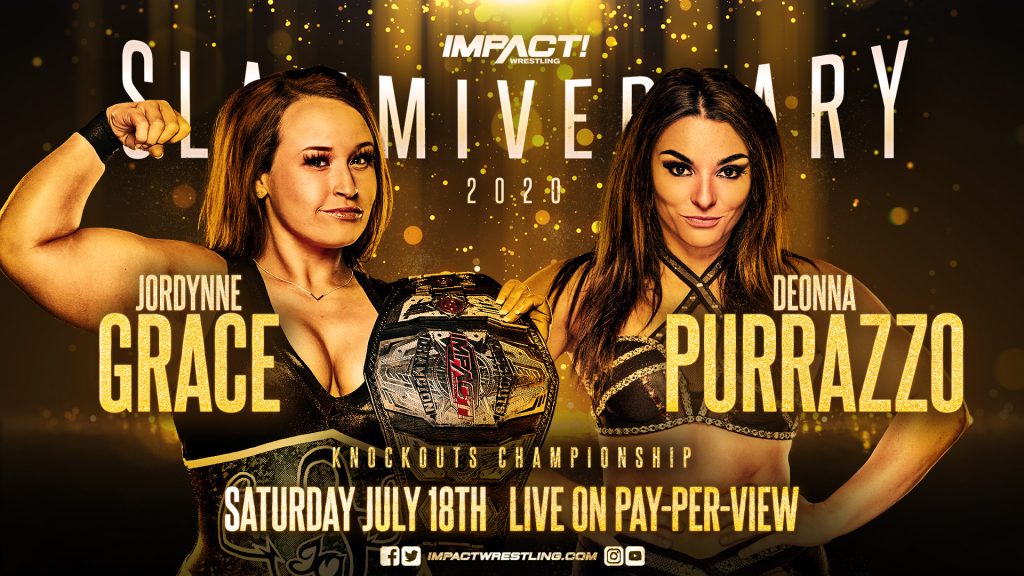 Grace overpowers Deonna in the early going, causing her to retreat to the outside. Grace dives through the ropes and lays in a series of shots on the floor. Deonna begins to wear down the arms and shoulders of the champ. Deonna takes Jordynne off her feet with a strong clothesline. The Virtuosa locks in the armbar but Grace gets to the ropes. Deonna continues to dominate. Grace begins to build momentum with a submission of her own.

Grace doesn’t get all of a Grace Driver because of the damage done to her arm. Both competitors exchange shots as Grace gets the upper-hand with multiple powerslams. Jordynne connects with a splash in the corner but Deonna kicks out at two. Deonna locks in the double armbar, forcing Grace to verbally quit. Deonna Purrazzo is the new Knockouts Champion!

On Saturday, October 24th, IMPACT Wrestling returns to pay-per-view with Bound for Glory. 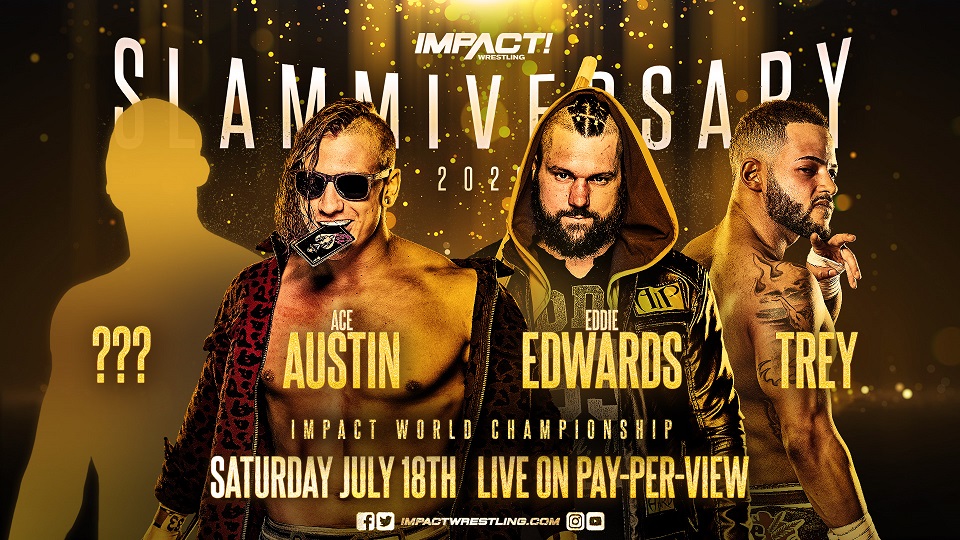 Rich Swann comes out, throws away his crutches and is revealed as the fourth competitor in this World Title main event!

The match is about to begin when the World Class Maniac, Eric Young makes his return to IMPACT Wrestling. This match is now a five-way!

Eddie dives to the outside but is caught by Madman Fulton and driven into the hardest part of the ring. Referee Brandon Tolle ejects Fulton from ringside. Fulton refuses to leave until Tolle threatens to disqualify Ace. Fulton leaves as Swann picks Ace off the top with a Rana. Swann attempts a handspring cutter but Eddie counters into a Blue Thunder Bomb. Trey hits Swann with combination offense, sending him to the floor. Trey ducks a clothesline from Eddie and dives through the bottom rope, taking out Swann on the floor with a Destroyer. Eddie has Ace beat but Trey is blinded by rage and breaks up the pin. It costs him as Young hits Trey with a devastating Piledriver for the elimination.

Trey is eliminated by Eric Young

Young counters body scissors from Swann into a back suplex. Young powerbombs Swann into Eddie and Ace, sending them flying off the top through a table on the floor. Swann counters a Piledriver attempt and rolls up Young for the elimination. Young snaps and brutally attacks Swann with a steel chair, targeting his previously injured leg.

Ace picks up the pieces and eliminates Swann with The Fold.

Eddie Edwards and Ace Austin are the final two competitors, one of them will leave as champion. Eddie counters The Fold into a belly-to-belly suplex. Eddie connects with the Boston Knee Party for a near fall. Ace successfully hits The Fold for a near fall of his own. Ace jumps off the top but Eddie avoids him. Eddie connects Die Hard Flowsion to become the new IMPACT World Champion!

As Josh Mathews and Don Callis are signing off, a video package plays and EC3 appears on the screen! Slammiversary goes off the air.