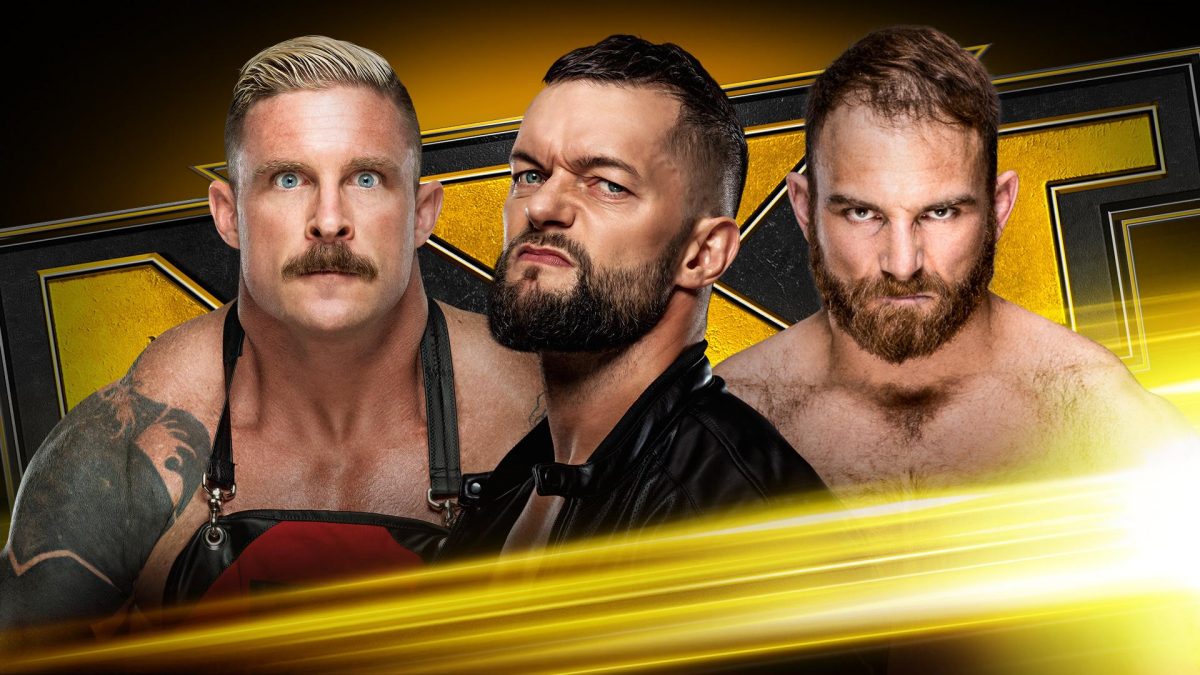 Dakota Kai attacks Io Shirai as she makes her way tot he ring and Tegan Nox comes to Io’s aid. Candice LeRae goes after Nox. The referee has to hold both teams back to start the match.

Nox and LeRae start things off and lock up. LeRae tries to reverse a wrist lock but LeRae with a take down and she gets a series of near falls. LeRae sends Nox into the turnbuckles but Nox with a shoulder. LeRae with a snap mare and she gets a near fall. LeRae with punches. Nox with punches and Kai tags in. Io tags in and Kai with a leg sweep. Io with knees and a snap mare followed by a kick to the back. Io goes through the ropes and hits an arm drag followed by a drop kick.

Kai chokes Nox in the ropes while the referee is not looking and Candice gets a near fall. Kai tags back in and Nox with forearms to get out of the corner. Nox with a fallaway slam and Candice tags in. Candice tries to keep Io off the apron and Nox with a head butt and both women are down. Io and Kai tag in and Io with shoulder tackles and a drop kick. Io with a pendulum kick in the corner and she gives Candice a palm strike on the apron. Io with a springboard drop kick for a near fall. Kai blocks a Tiger Driver but Io goes up top and Kai stops her.

Kai with forearms to the back. Kai is dropped on the turnbuckles and IO with a double thrust to the throat and Kai hangs in the tree of woe. Io with a double stomp. Io gets a near fall. Kai tags Candice in and Candice is shocked at the arrangement and Io with a Tiger Feint Kick to the back followed by a springboard drop kick. Io with a running double knee strike into the corner. Io with a suicide dive to Kai. Nox with a Shiniest Wizard when the referee was not looking. IO with a moonsault for the three count.

Strong is sent into the plexiglass a few times. They return to the ring and Gargano with the slingshot DDT for the three count.

Dakota Kai is in the interview area and she is asked about walking out on Candice LeRae. She is not a team player and she is not going to be part of matches to determine who is the number one contender. Dakota demands Io Shirai.

Rhea Ripley shows up and she is happy that Dakota is not a team player. Dakota is not next for Io and Rhea says she will go through anyone who thinks otherwise. 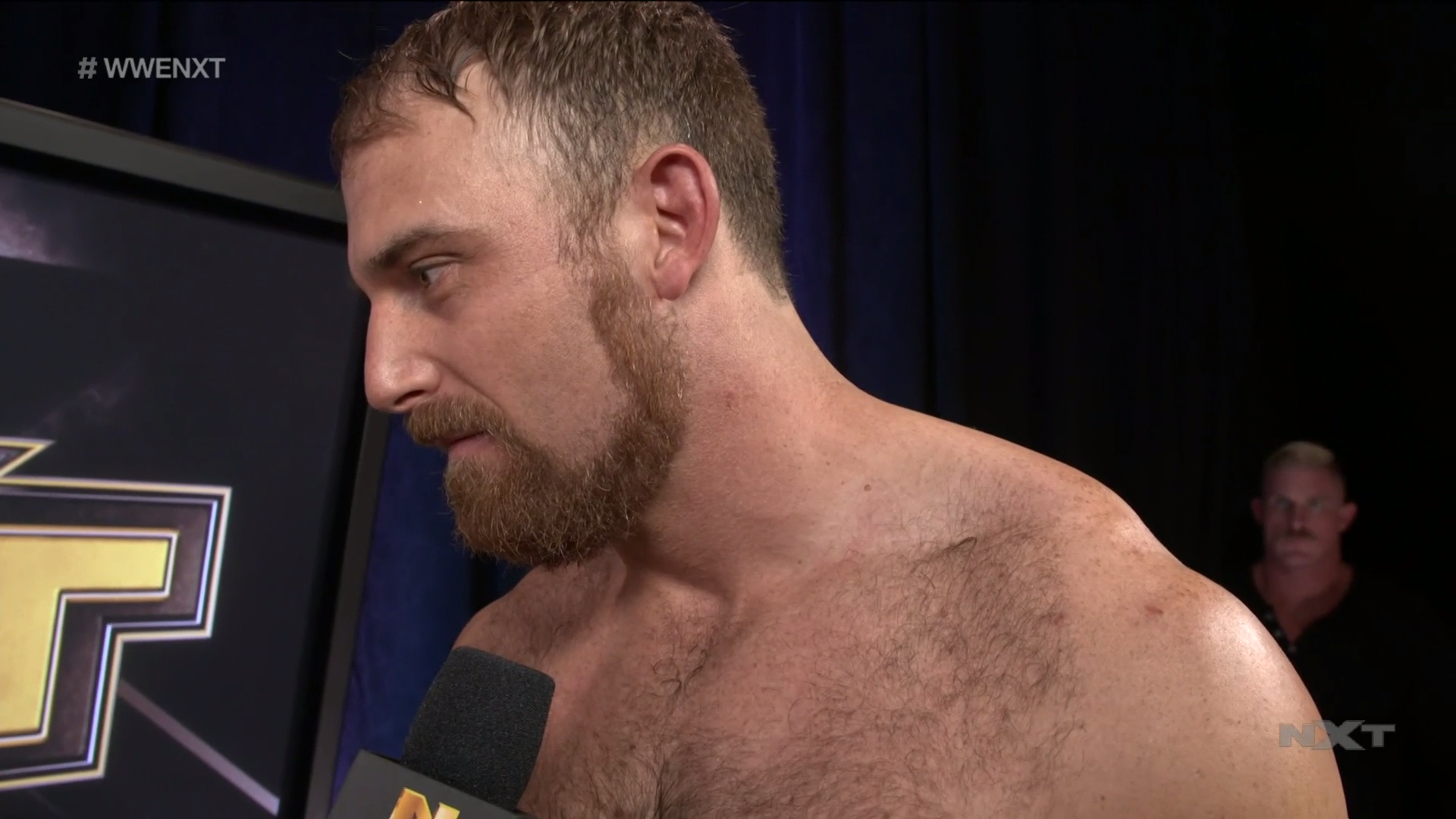 We are back and Timothy Thatcher is asked about his match later tonight. Thatcher says two men will get schooled in Thatch as Thatch Can. Thatcher says the only push he knows is pushing his shoulder into Balor’s knee cap. He says Lumis is not a tortured artist until he steps in the ring with Thatcher. 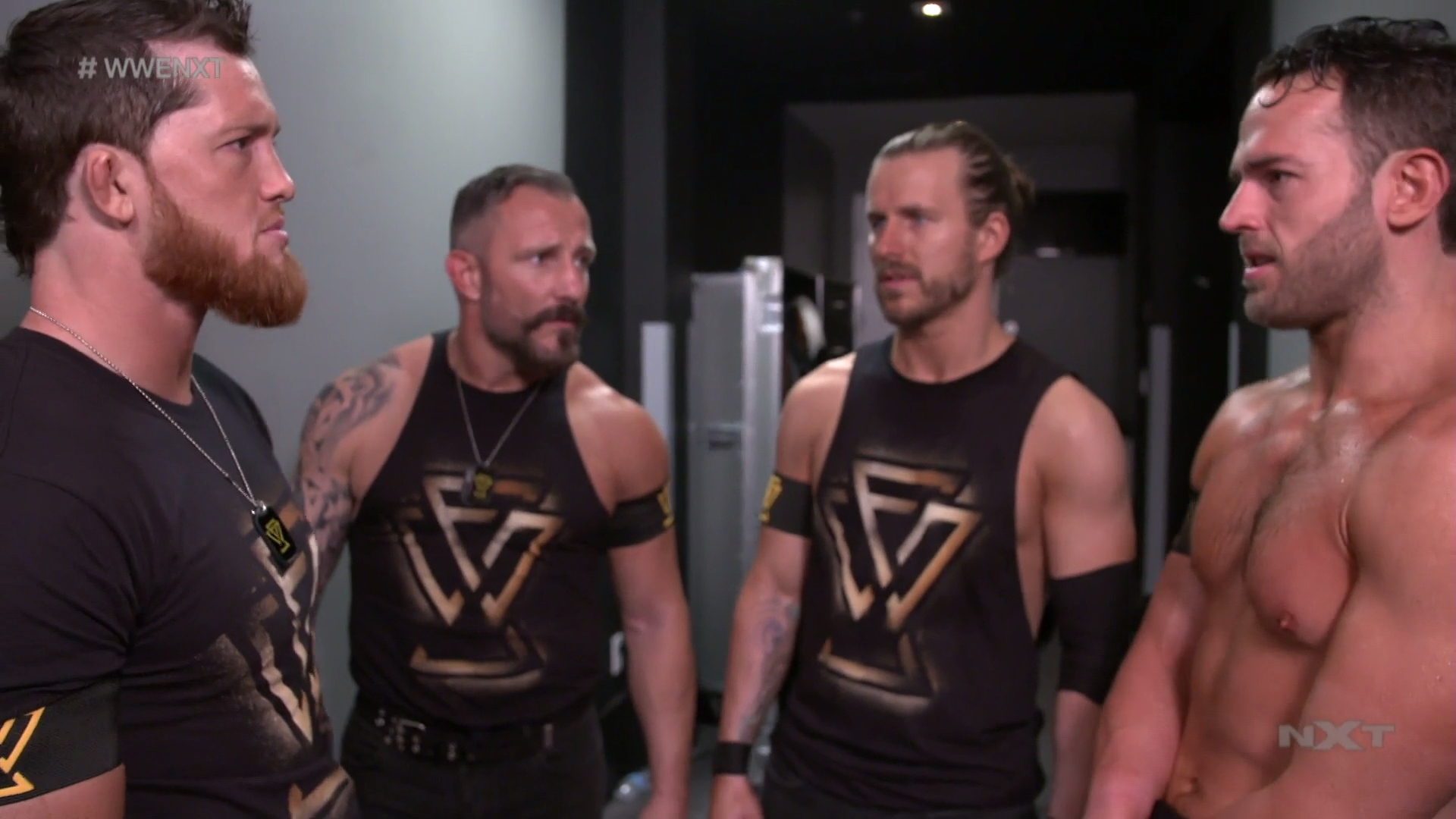 Undisputed Era is walking in the back and Kyle O’Reilly shows up and he says he is sick of the BS and excuses. They have run this place from the second they entered this place. They are back in business and it is time to change the freaking business.

Ridge Holland says growing up in Yorkshire, you get out or go to jail. They said I was too violent. Ask anyone he has been on the field with or in the ring with. NXT, this is your warning. Ridge Holland is coming for the North American Championship.

Keith Lee makes his way to the ring. Keith says let’s get something straight. We can talk all day about Dijak telling me no and saying that he wanted it. Dijak is a grown man and he is going to be fine. On the other hand, this man that seems to think that the sound of sound of sand is the sound of a clock. Kross, you have clearly made it a point that you want my attention and you want this title. You have done all this extra bulls***. All of your extra bulls*** means nothing when you can’t come to me face to face. I am doing something you don’t have the balls to do. That is face to face, man to man. Karrion Kross, I am calling you out.

Cameron Grimes makes his way to the stage and he says Keith Lee should be talking about him. You gave away that North American championship before I take them both. I am going to take that NXT Title and I am going straight to the moon. Cameron asks Keith if he can hear him and look him in the eyes.

Keith grabs Grimes by the throat and brings him into the ring. Lee with a splash into the corner.

Karrion Kross asks what man makes a choice and does absolutely nothing while his friend suffers. You did that and you have to live with that. I will present you with two more choices. The easy way. You give me my shot at the NXT Championship. OR the Hard Way and you don’t want to know what that is because everyone will suffer. Tick Tock.

Keith says you want to talk about choices. Kross, pick the time and place and I will whoop that ass.

Scarlett dramatically turns around and leaves.

Martel and Barthel start things off and Barthel with an arm drag after a break. Barthel with an arm bar and AIchner tags in and gives Martel an arm drag into an arm bar. Martel with a boot and Parker tags in. Martel with a leg sweep and Parker with a slingshot elbow. Parker with punches to Barthel and a forearm to Barthel. Aichner catches Parker and hits a spinebuster onto Martel’s back. Barthel tags in and he hangs Parker in the ropes and they hit a double running drop kick. Barthel punches Parker and Aichner tags in.

Aichner with a spinebuster and Barthel with a knee. They hit the European Bomb for the three count.

After the match, Barthel says the standard bearers of the tag team division have returned. The Undisputed Era come to the ring and attack Imperium. Cole with a super kick and Strong with a knee to Barthel. Fish and Kyle hit No Man’s Land on Aichner. Cole says they are the ones who run this place.

We take a look at Bronson Reed. He says the street art and graffiti remind him of his home town. Bronson says he had a lot of friends who were passionate about street art while he was passionate about wrestling. His journey to NXT started with his wife. She gave him the money to go to a wrestling camp. He traveled to 13 different countries to get her. He faced Dexter Lumis in his NXT debut. Some want it to happen and some wish for it to happen and some make it happen. He was the underdog last week and he had something to prove. That proved to the whole world that he is a player in NXT. Nothing is going to stop him in this ladder match. No one else has 320 pounds of fury. No one else has his fighting spirit. The Thicc Boy Dream comes true at Takeover.

William Regal has responded to the situation surrounding Karrion Kross and Keith Lee. Regal says that in light of the situation, he tells both men that he will not be bullied into making championship matches. Those opportunities will be earned in NXT.

Jake Atlas says he is back on the road to the title and it starts with Isaiah Scott. He mentions coming close against Santos Escobar.

Scott with the JML Driver for the three count.

Damian Priest is asked about his match against Oney Lorcan and Ridge Holland next week. Priest says his thoughts have not changed now that he knows his opponents. He will walk out of Takeover as the champion. Oney is tough and Ridge looks tough. There will not be any upset next week.

Rhea Ripley faces Dakota Kai in a Number One Contender Match next week.

Imperium will face Bobby Fish and Kyle O’Reilly next week for the Tag Titles.

And Damian Priest vs. Oney Lorcan vs. Ridge Holland.