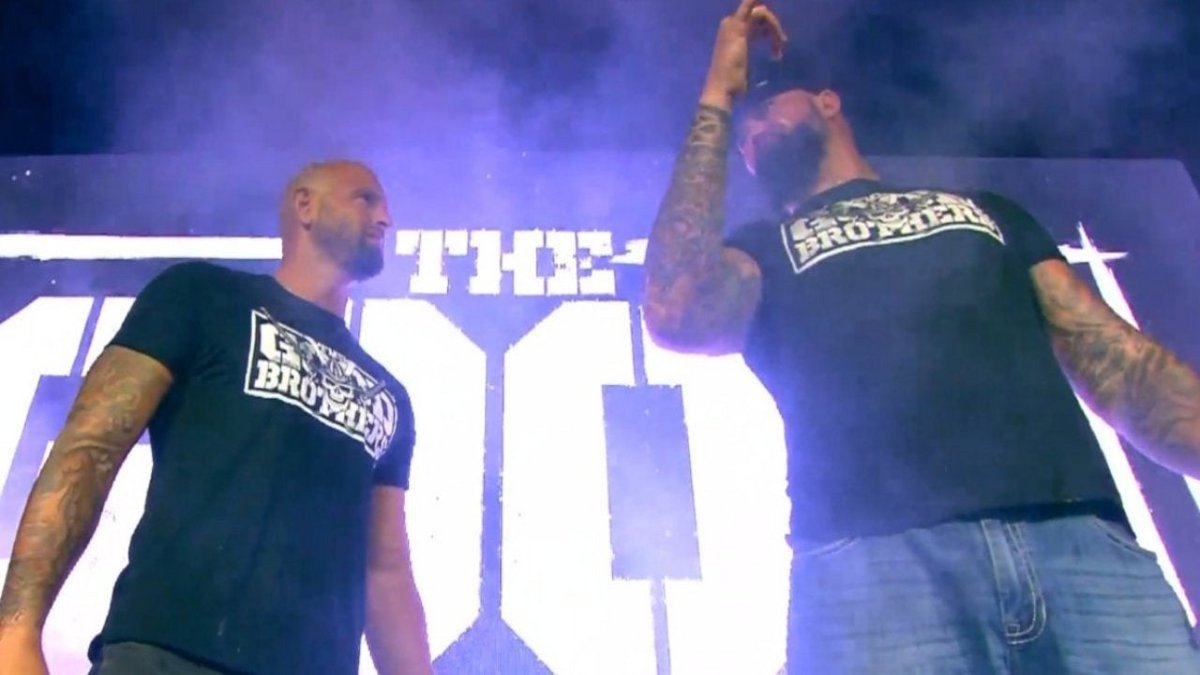 On a recent episode of the Talk’N Shop podcast, The Good Brothers, Karl Anderson and Luke Gallows discussed their early talks with AEW and the company’s plans for the team had they signed a deal.

On AEW’s talks with the team, Anderson stated:

“I remember it was January 2019. We were going out to California for a house show, and we messaged The Young Bucks because we had heard rumblings of some stuff that they were doing. We stayed close with them the entire time, but we hadn’t heard exactly what they were going to do. They were just landing back from Japan on the day we ran Ontario, CA for this house show, and as they landed, they said, ‘dude, let’s meet up at Ontario Mall.’ We drove to Ontario Mall before the house show, and we sat there with them for an hour and a half.

They were telling us what they were going to do, and it’s not that we didn’t believe them. We were thinking is this gonna happen? Then as 2019 went on. We realized that we really wanted to leave. We started hearing AEW coming into more fruition. We met with Kenny Omega in Winnipeg. We sat and talked with him.”

On AEW’s plans for the team had they signed a deal, Anderson stated:

“As it came close to June or something like that, I remember the text clearly from Matt and Nick, and they had planned out the entire debut of Dynamite’s main event. I’m gonna come out. Gallows comes from behind. We walk to the ring. We ‘too sweet’ The Young Bucks and Kenny. Turn around, everyone’s happy and we beat the f–k out of them. We leave them laying like the end of the very first night of Nitro. I can chills as I say that because it’s one of the biggest regrets of my life that didn’t f–king happen. It kills me badly.”

A recent episode of the Sports Guys Talking Wrestling podcast had Dustin Rhodes as the guest and one of the topics discussed included the current status and plans for his new Rhodes Wrestling Academy.

“I am opening a wrestling school. I’m gonna wait until after the holidays for the grand opening I guess. It’s gonna be in January so probably November, I’m gonna lock down a building, we’re gonna go from there and I’m gonna build this brand of Rhodes Wrestling Academy and a place for kids to come, to really learn the art of telling stories and pro wrestling done the right way. There’s a lot of schools out in America today and all over the world, you know? But I think people will come get the knowledge I have because of my name and that’s a blessing that I’ve been in the business so long and that I do have something to teach and that I know so much and have so much knowledge about our sport, that they’re gonna come learn from me. They’re gonna come from all over and I can’t wait to do it man. It’s gonna be fun. I’m probably gonna take no more than 20 students every three months. I’m gonna do it like that so we’re gonna have camps. I’m very excited about it. It’s kind of on the back-burner right now because it’s not nut cutting time, and I can’t wait, so stay tuned for January for Rhodes Wrestling Academy.”

Rhodes also stated that Ricky Starks is one of the people he is currently considering to be a potential coach for his new wrestling academy.

“He went out there with Cody and blew it out of the park man and it was really impressive to watch him with Cody and he felt like he belonged there and they signed him immediately which was very, very cool for them to do that because he’s a hard worker and he’s respectful, he’s got a great attitude and he knows what he’s doing pretty much. I would actually be, probably wanting to look at him as one of my coaches for my wrestling school if he was available and wanting to do that, because he’s pretty good. He’s a good kid and he’s young, he’s fresh and he’s got a lot in the future coming for him. I know that and especially here with AEW, he’s gonna get more than one chance.”

World Xtreme Wrestling reportedly rescheduled this year’s Catch Wrestling Festival tournament to a new date of September 21-26, 2021 due to coronavirus-related reasons, according to the Wrestling Observer Newsletter.

Game Changer Wrestling announced that ACH will be making his official debut for the company at their Homecoming event on July 25th in Atlantic City, New Jersey.

Stardom recently announced that they will be running two events called Stardom Yokohama Cinderella 2020 on August 22nd and 23rd in Yokohama, Japan.

Bobby Fulton’s son, Dilon Hines, announced on Twitter that his father was hospitalized earlier today due to him suffering deteriorating health issues.