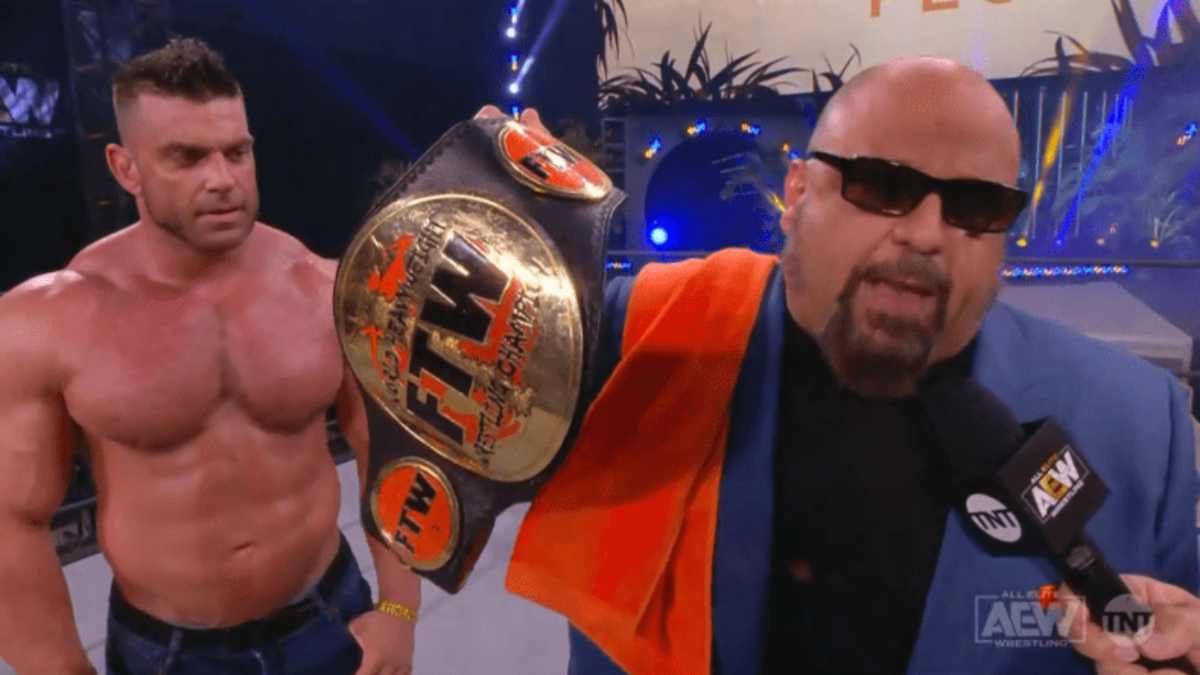 PWInsider held a recent interview with AEW CEO Tony Khan and one of the topics discussed include the origin of reviving the FTW Championship in AEW.

“Well, it was a few weeks ago. Taz told me he had it. And immediately, that’s when the idea struck me to do this. Then I asked him to bring it down and get it down here. And Taz’s son, Tyler, who is a great kid, traveled down with it and came down and got tested, and joined us in the bubble. Tyler brought it and then we had it. Taz presenting it to Brian was a really important part of the presentation. I think Taz and Brian, it was good that it wasn’t the first thing they did together, because they really had become associated. Brian was always supposed to debut in that casino ladder match, as soon as we got his diagnosis that he was going to be out until May. This thing had been planned for a long time for Brian to make the big intro, and make the big splash, and challenge Moxley.  Brian and Taz, they’ve established a rapport on television. When Taz told me he still had the belt, it was a perfect thing to add to the story I thought. And so, a couple weeks ago, when it came up, I really jumped on it. Once I found out he had it, and we were able to use it, I wanted to make it a part of the story. I wouldn’t have done it without his blessing. I mean, he’s the one who told me he had it. So once he said he still had possession of it, and I checked, and we’re cleared to use it, then, at that point, I was like, “This is, to me, almost like a no brainer.   It adds so much to the story, to the presentation of Brian. It’s so much credibility, the FTW title.” I grew up watching ECW, as you know, and that belt meant a lot.  Even though it’s not a recognized championship, when it was defended, or when you saw it, it felt like it was part of the presentation of Taz as one of the top wrestlers in the sport. And I think it can be the same thing for Brian Cage. So I was really excited about it, as soon as Taz told me he still had that belt, and then when I realized that we could use it. It was a few weeks ago.”

The National Wrestling Alliance reportedly has been offering low monetary value contracts to their talent, according to Fightful.

Fightful Select reported that prior to his departure, Ricky Starks had been offered a $1000 per month contract by the NWA to remain in the company. Starks rejected NWA’s offer and later signed an official contract with AEW for an undisclosed amount.

It was also reported that another NWA talent who recently left the company was Zicky Dice, who had been offered a new contract only worth $250 per month. Dice reportedly rejected the initial offer but eventually re-signed with the company for the remainder of 2020, only to later be granted his release.

Thunder Rosa is still under contract and Allysin Kay currently has plans to continue working for the NWA once the company is able to resume events. The monetary value of Rosa and Kay’s contracts were not revealed but it was reported that it is currently not known if Rosa is interested in staying in the company for the long term.

Ring of Honor recently released a preview trailer for their upcoming episode of ROH TV that will be in tribute to the late Hana Kimura.

Jake Roberts announced on Instagram that he underwent surgery this past Monday for a medical issue that was not disclosed by him.