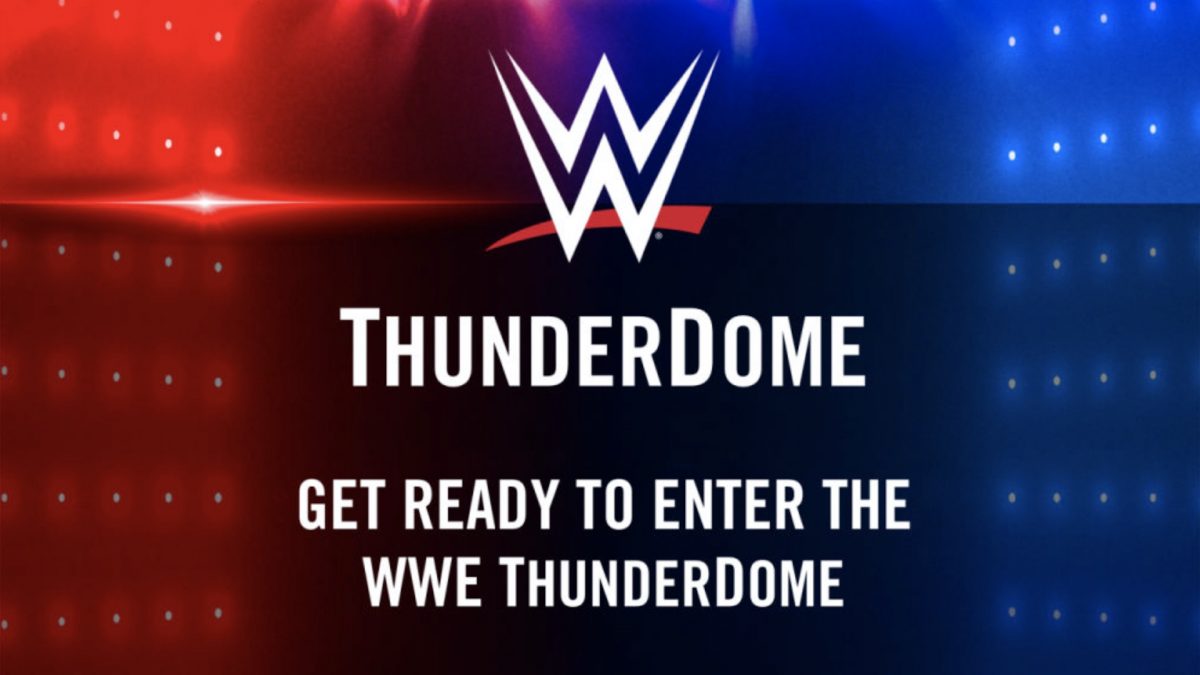 WWE announced that starting this Friday on SmackDown, future Raw and SmackDown episodes (and PPVs, including SummerSlam) will take place at the Amway Center in Orlando and will feature what WWE is calling “WWE ThunderDome” – “a state-of-the-art set, video boards, pyrotechnics, lasers, cutting-edge graphics and drone cameras, [that] will take WWE fans’ viewing experience to an unprecedented level” and “virtually bring fans into the arena via live video on massive LED boards.”

“WWE has a long history of producing the greatest live spectacles in sports and entertainment, yet nothing compares to what we are creating with WWE ThunderDome,” said Kevin Dunn, WWE Executive Vice President, Television Production. “This structure will enable us to deliver an immersive atmosphere and generate more excitement amongst the millions of fans watching our programming around the world.”

With the debut of WWE ThunderDome, WWE will take residency at Amway Center in Orlando and virtually bring fans into the arena via live video on massive LED boards, in conjunction with The Famous Group and its proprietary technology, for every Monday Night Raw, Friday Night SmackDown and WWE pay-per-view event. Starting tonight, fans can register for their virtual seat to be part of upcoming shows via www.WWEThunderDome.com or at WWE’s Facebook, Instagram or Twitter pages.

“As WWE takes residency at the world-class Amway Center, we have reimagined our live event experience for today’s environment,” said Brian Flinn, WWE Chief Marketing & Communications Officer. “In partnership with The Famous Group, we will virtually bring our fans back into the show and recreate the interactive in-arena atmosphere that has been a staple of WWE events for decades.”

WWE’s Amway Center residency will continue for the foreseeable future and Raw, SmackDown and pay-per-view programming will be produced on closed sets with only essential personnel in attendance. WWE will continue to administer its health and safety protocols for talent, crew and employees in conjunction with each production, including PCR testing for COVID-19, social distancing and wearing masks.

WWE says that people can “register for their virtual seat to be part of upcoming shows” at wwethunderdome.com, but as of now, the site is not yet launched.

Moving to Amway, and unveiling the ThunderDome, the opportunities are limitless. We can now do things production-wise that we could never otherwise do. We’re flying drones in the arena, we are putting a roof inside the Amway Center, and we’ll be able to project content onto the roof. So when a big star like Drew McIntyre comes down to the ring, the whole arena will turn into his content with lasers, pyro, smoke, projections on the top of the building and on the floor. It will be a big, beautiful entrance, better than WrestleMania.

Like the NBA, we’re doing virtual fans, but we’re also creating an arena-type atmosphere. We won’t have a flat board, we’ll have rows and rows and rows of fans. We’ll have almost 1,000 LED boards, and it will recreate the arena experience you’re used to seeing with WWE. The atmosphere will be night and day from the Performance Center. This is going to let us have a WrestleMania-level production value, and that’s what our audience expects from us. We are also going to put arena audio into the broadcast, similar to baseball, but our audio will be mixed with the virtual fans. So when fans start chants, we’ll hear them.

We start on Friday on SmackDown, and it will be a learning experience. We have two days of testing, and we’re going to practice like hell, then we’re off to the races. We may have fans for certain entrances, standing up and cheering for the typical babyfaces. But someone like Bray Wyatt, who is so character-driven, the entire Amway Arena will be one big Fiend-dom. That’s our opportunity to be different from sports, where we can present these larger-than-life characters uniquely. This will be great for people watching at home across the globe, as well as the ones participating.

We’re grateful and so appreciate the fans are hanging with us. It’s been tough. The shows haven’t been what we’d like them to be, and we’d be dishonest saying anything else. We miss our fans. Our fans make our shows. Without them, it’s been really challenging. I can’t wait to see the ThunderDome full of 1,000 people, giving us the energy we need to make this as entertaining as possible. I think people watching and participating are really going to enjoy this, and it’s going to make people say, ‘Wow, WWE, it’s back.’

Here’s a short video of the set being constructed, via Pro Wrestling Sheet:

Good to be back in the game, and see some old road dogs and friends again, even if it’s a temporary thing..