Matt Hardy Injured at All Out, Reby Hardy Angry (Updated) 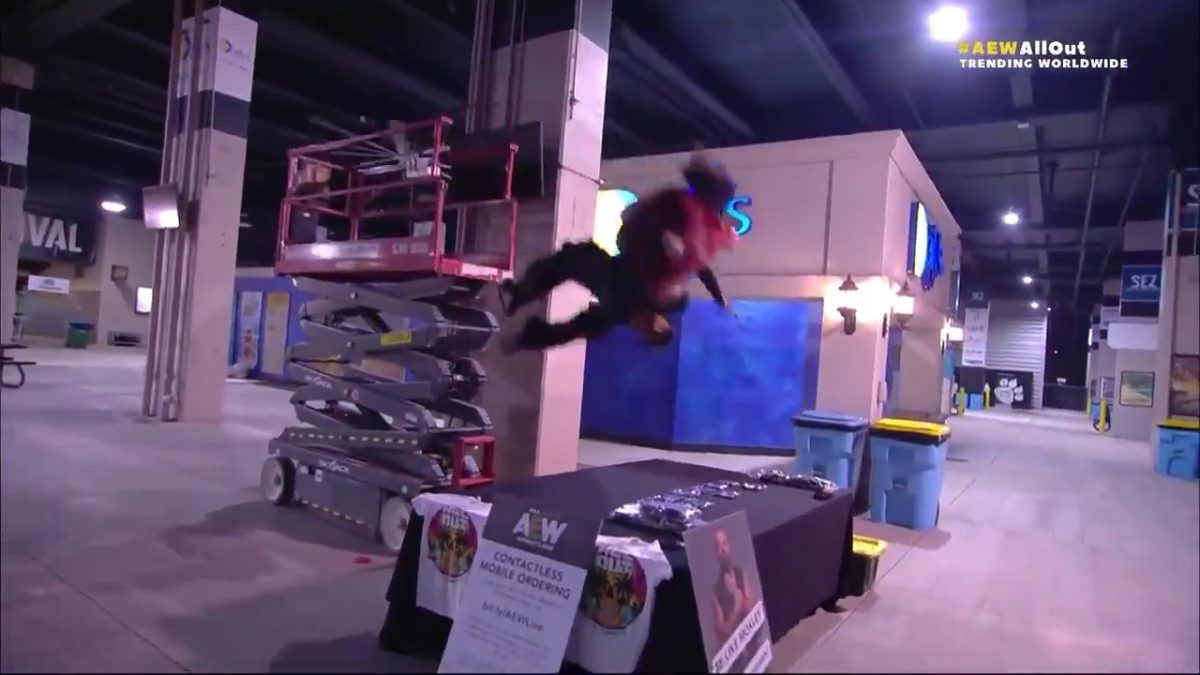 Matt Hardy appeared to be injured after he slammed his head hard onto the floor during his “Broken Rules” match against Sammy Guevara at All Out tonight.

Very early in the match, Hardy and Guevara fought on top of a lift about six feet in the air and Guevara speared Hardy off of it onto a table below, but they overshot the table and Hardy’s head hit the concrete floor below hard. Matt appeared to be knocked out for a few seconds as referee Aubrey Edwards checked on him. Matt eventually made it to his feet, but appeared very wobbly and was barely able to stand, so the ref put up the dreaded “X” arm symbol to indicate a legit injury and the match was stopped.

So Matt Hardy hit took a major bump and hit his head on the cement! I hope he’s ok this was crazy! #aew #AEWAllOut pic.twitter.com/sMJMabYYf6

A minute or so later, Hardy came back out and started brawling with Guevara. They immediately climbed onto the scaffolding near the entrance ramp and Hardy knocked Guevara off onto a crash pad below. The ref counted to 10 and the match was officially over.

Later in the show, the commentators said that Hardy was allowed to continue the match because he was checked on by AEW doctor Doc Sampson and passed concussion protocols.

On the All Out post show on YouTube, Tony Schiavone said, “He was examined by the medical team. They said he passed concussion protocols and they took him to the hospital for additional scans. So that’s all I know about Matt Hardy right now.”

During a media scrum after the show, Tony Khan said that Matt appears to be OK and was sent to the hospital as a precaution. Khan said that he made the decision to ring the bell to pause the match when it appeared that Hardy was injured and that Hardy passed concussion protocols and he was OK, so the doctor cleared him to continue, and no one pressured the doctor into that decision. He said that it was a scary moment for everyone, but it thankfully appears that Matt is OK.

Here’s the full quote from Khan:

Health and safety of the wrestlers is always the most important thing at AEW and I just wanted to give everyone an update on Matt Hardy. Most importantly, Matt is OK and it looks like Matt’s gonna be OK. What happened with Matt is that Matt had taken a fall in the match and I stopped the match, paused the match, and had the doctor check on him. And I was concerned that Matt could be hurt and I rang the bell to pause the match. And when the doctor checked on him, the doctor passed him and cleared him on the protocol. He checked Matt and then Matt came back after and passed the concussion protocol and he’s doing OK. I spoke to him right after the match and again just now. He went as a precaution to the hospital for tests to check out that he’s OK but it looks like he’s OK, which is why the doctor cleared him to continue. And it was not something that any of us enjoyed and it was something that was a scary moment, but the most important thing is that Matt is OK and we’re all really glad about that.

Khan was then asked if Matt was able to go back out there against doctor’s orders and Khan responded:

The doctor did clear him. Matt did not pressure him and Doctor Sampson would not be pressured into clearing anybody. He’s told people from our show without hesitation whether it’s from a blood test or an injury, and he’s really strict about that stuff and that’s why when people have had injuries that he didn’t feel comfortable with people doing physicality or wrestling with, we never put those people out there. So I never would have gone against the doctor’s decision and most importantly, Matt wouldn’t have been able to overrule the doctor’s decision, not with the doctor himself or with me. The doctor cleared him, which is the most important thing. Matt also did want to continue, but the doctor cleared him. So at that point, when the doctor cleared him to continue, Matt really wanted to continue and that’s why we continued.

Matt’s wife Reby Hardy posted the following on Twitter after the scary moment:

Let me be absolutely fucking clear.
There is NOTHING entertaining about a concussion. Shame on everyone in that goddamn building. pic.twitter.com/ujdOU9Z60I

In another tweet this morning, Reby said, “They needed additional imaging done after his CT. He’s still in the hospital. 1000% concussion. Anyone with eyes could have told you that tho.”

They needed additional imaging done after his CT. He’s still in the hospital. 1000% concussion. Anyone with eyes could have told you that tho. pic.twitter.com/pvitxewWI5