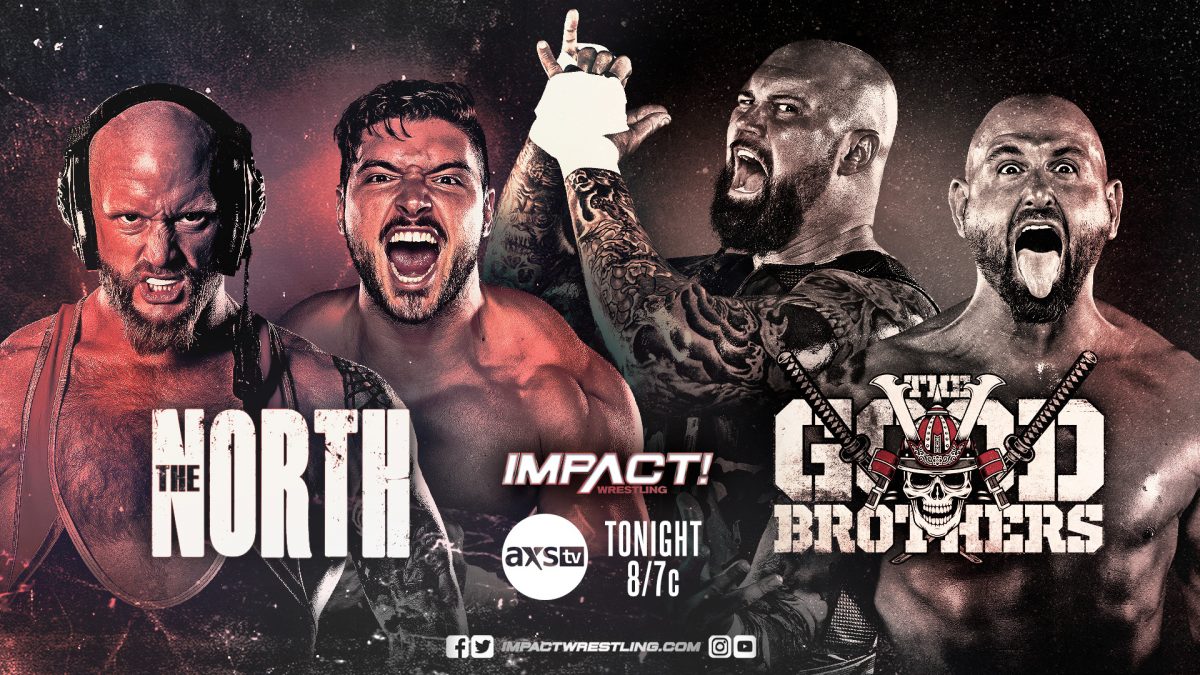 Winner Enters Call Your Shot Gauntlet at BFG #20, Loser Enters #1
Heath vs. Cousin Jake vs. Hernandez vs. Alisha vs. Rhino

Hernandez doesn’t take Alisha seriously as he places her on the top rope to observe but Mrs. AIP doesn’t back down. Rhino brawls with him on the floor while Heath and Jake go at it in the ring. Rhino hits Hernandez with a shoulder tackle. Alisha sneaks in and tries to steal the pin but Hernandez kicks out. Alisha dives to the outside, taking out Rhino, Heath and Jake. Hernandez tries a Border Toss on Alisha but Jake breaks it up. Rhino charges with the Gore and Hernandez sidesteps, causing Rhino to take out Alisha. Hernandez rolls up Rhino to score the pin and the coveted #20 spot in the Call Your Shot Gauntlet. Rhino will enter at #1.

Jimmy Jacobs interviews self-proclaimed TNA World Heavyweight Champion Moose after reclaiming his title from EC3 last week in a brutal brawl. This Saturday at Bound For Glory, they are set to square off again, this time in an undisclosed location. Jimmy asks him if he’s happy after what he accomplished. Moose snaps and storms off the set. Moments later, EC3 followers throw a bag over Jimmy’s head and throw him into the back of a truck.

John E. Bravo is furious after his wedding rehearsal doesn’t go according to plan. Cousin Jake secures the photographer and it’s none other than Kaleb with a K. Taya Valkyrie walks in and even she’s shocked at how rude Bravo is acting. If this is a sign of things to come, next week’s wedding may not go as smoothly as they had hoped.

This Saturday at Bound For Glory, Deonna Purrazzo defends the Knockouts Championship against #1 contender Kylie Rae!

Rosemary needs Havok’s help to revive Father James Mitchell from the Undead Realm, so that he can officiate her wedding with John E Bravo next week. Havok hits a vicious clothesline in the opening moments of the match. Rosemary connects with a reverse DDT for two. Havok charges into the corner with her signature running boot. Rosemary comes off the top with a big crossbody for a near fall. Rosemary hits back-to-back Spears to pick up this all-important victory.

The Tag Team Championships are on the line this Saturday at Bound For Glory when the Motor City Machine Guns defend against The Good Brothers, The North, and Ace Austin & Madman Fulton!

Only one team can emerge as champions SATURDAY at Bound For Glory LIVE on PPV! #BFG2020

Jimmy Jacobs is brought to an undisclosed location by EC3 where he forces him to conduct an interview. EC3 lays out his plans for Moose at Bound For Glory.

An intense rivalry is renewed just days before Edwards collides with Ken Shamrock at Bound For Glory. Edwards dives through the ropes with a burst of speed, crashing into Callihan on the ramp. Edwards slingshots over the top but Callihan avoids it, allowing him to gain control in a brawl outside the ring. Edwards hits a Blue Thunder Bomb out of the corner for two. Both competitors exchange strong strikes in the middle of the ring. Callihan gets the upperhand with a powerbomb for two. Edwards comes back with a Tiger Driver for yet another near fall. As Edwards attempts the Boston Knee Party, Callihan grabs his phone and turns out the lights. When they come back on, Shamrock is standing on the apron. Callihan rolls up Edwards off the distraction to steal the win.

After the match, Shamrock locks in the Ankle Lock and lays out the former World Champion.

The six competitors in the Six-Way Scramble for the X-Division Title at BFG clash in tag team action right here, right now. Grace and Bey hold TJP but Rohit takes his time coming off the top, allowing him to fight out of it. TJP hits Bey with a tornado DDT before making the tag to Trey. The match breaks down with a flurry of action. Grace hits Willie with a Spinebuster. Rohit almost takes Trey’s head off with a flying knee. Rohit and Bey can’t get on the same page as they argue over who goes for the pin. Rohit attacks Bey but it comes back to bite him as Bey later takes him out with a springboard cutter. Trey capitalizes and pins the X-Division champion to win.

The match the world has been waiting for happens this Saturday at Bound For Glory as Rich Swann challenges Eric Young for the IMPACT World Title!

Gia Miller conducts a sit-down interview with World Champion Eric Young. He tells her that his attack on Rich Swann, Scott D’amore and others were not part of his plan. Clearly delusional, Young says attacks like that will continue to happen if people get in his way. Out of nowhere, Swann blindsides Young and they brawl out of the building into the parking lot.

The North vs. The Good Brothers

Who will gain momentum heading into the huge four-way Tag Team Championship match this Saturday at Bound For Glory? The North employ classic tag team strategy as they cut off the ring and prevent Anderson from making the tag. After several minutes, Anderson is able to create separation when he hits Alexander with a big Spinebuster. Anderson makes the tag to Gallows, who goes on the attack. The Good Brothers attempt Magic Killer on Page but Alexander breaks it up. The referee loses control as all four competitors get involved, causing the match to end in a no contest.

Post-match, Ace Austin and Madman Fulton, as well as the reigning champs the Motor City Machine Guns make their way to the ring and total chaos ensues. The Guns and The Good Brothers clear the ring. Karl Anderson offers his hand to Shelley but quickly turns it into a cutter. The Good Brothers stand tall after hitting Sabin with the Magic Killer.

The final IMPACT! before Bound For Glory this Saturday goes off the air.