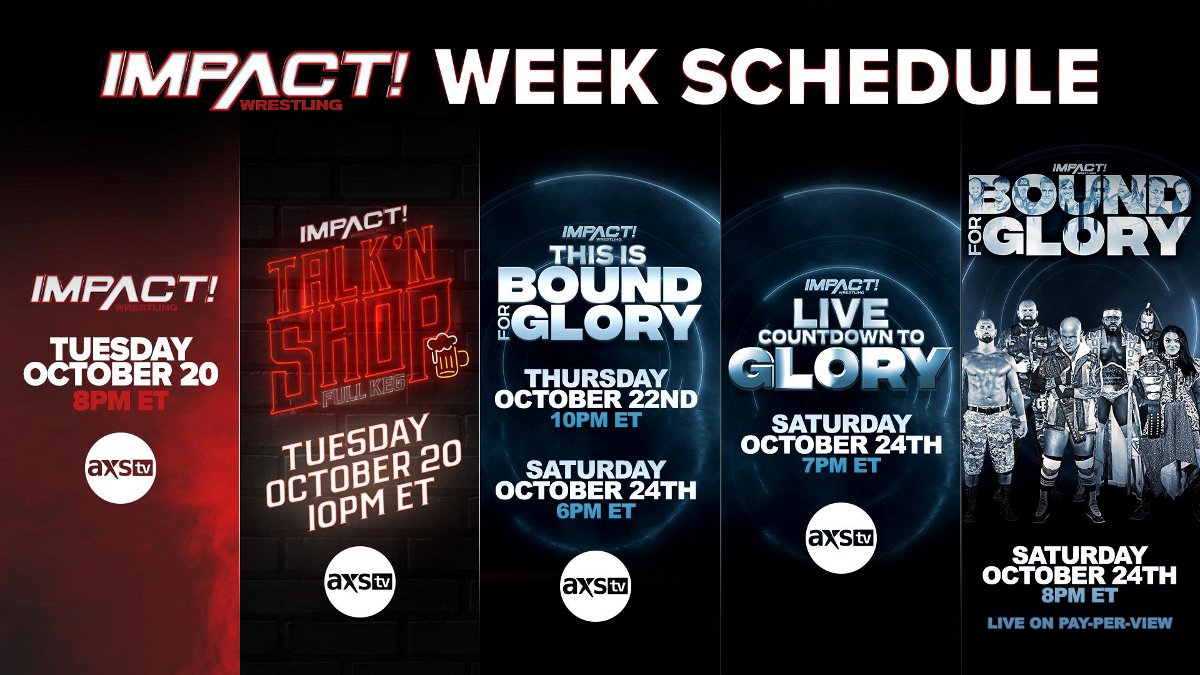 AXS TV recently announced that they will be airing a special themed week of Impact Wrestling-related programming on their network later this month.

This themed week of programming will start on October 20th with the Bound for Glory 2020 go-home episode of Impact and concludes on October 24th with a one-hour Live Countdown to Glory television special.

As noted before, Joey Ryan filed two defamation lawsuits against several of his sexual abuse accusers last month. Both lawsuits asked for multi-million dollar momentary compensation and court injunctions preventing future and removing past online accusations against him.

PWInsider’s Mike Johnson reported that Ryan filed a third lawsuit on September 30th against a woman not named in the report who is located in Canada. Ryan is claiming that this woman used social media posting to defame him and hurt his ability to make money as a professional wrestler.

Unlike the previous two lawsuits, Ryan is also claiming that these social media postings made by the woman and former WWE developmental talent Ryan Nemeth “encouraged violence to be committed on Plaintiff.”

Portion of the lawsuit with name of woman redacted by PWInsider:

“On information and belief, both [name deleted] Defamatory Statement and Nemeth’s response are available to view by any person interested or who happens upon [deleted]’s Twitter timeline. Also, no statement retracting [name deleted] Defamatory Statement or denouncing Nemeth’s statement has been made by [deleted.] In fact, more threats of violence upon Plaintiff in social networking sites have been made directly or indirectly to Plaintiff.”

AEW talent CIMA recently announced on Twitter that he had been involved in a traffic accident and suffered a head injury, facial contusion, nasal fracture, left wrist joint contusion, right hand contusion, neck contusion and lumbar contusion. CIMA stated that the accident happened while he was riding his bicycle and was struck by a car, which took place on September 29th according to Proresu-Today.

Jerry Lawler’s 50th Anniversary event on September 26th in Jacksonville, Florida reportedly drew an attendance of around 1,500, according to the Wrestling Observer Newsletter. Dave Meltzer reported that WWE had a camera crew at the event to tape footage for an upcoming Lawler special on the WWE Network.

Lucha Libre AAA talent El Hijo del Vikingo reportedly will be taking around a year off from wrestling due to family related reasons, according to the Wrestling Observer Newsletter.

During a recent virtual meet-and-greet event for Pro Wrestling Junkies, Matt Cardona revealed that his short-term deal with AEW expired after their All Out 2020 event, which took place on September 5th.

“Well hopefully I’ll be there more often. As of now, the agreement we had was through the pay-per-view [All Out] so that’s it. But hopefully — I didn’t go there to just get three t-shirts. I went there to win some championships so hopefully you’ll see me there very, very soon.”