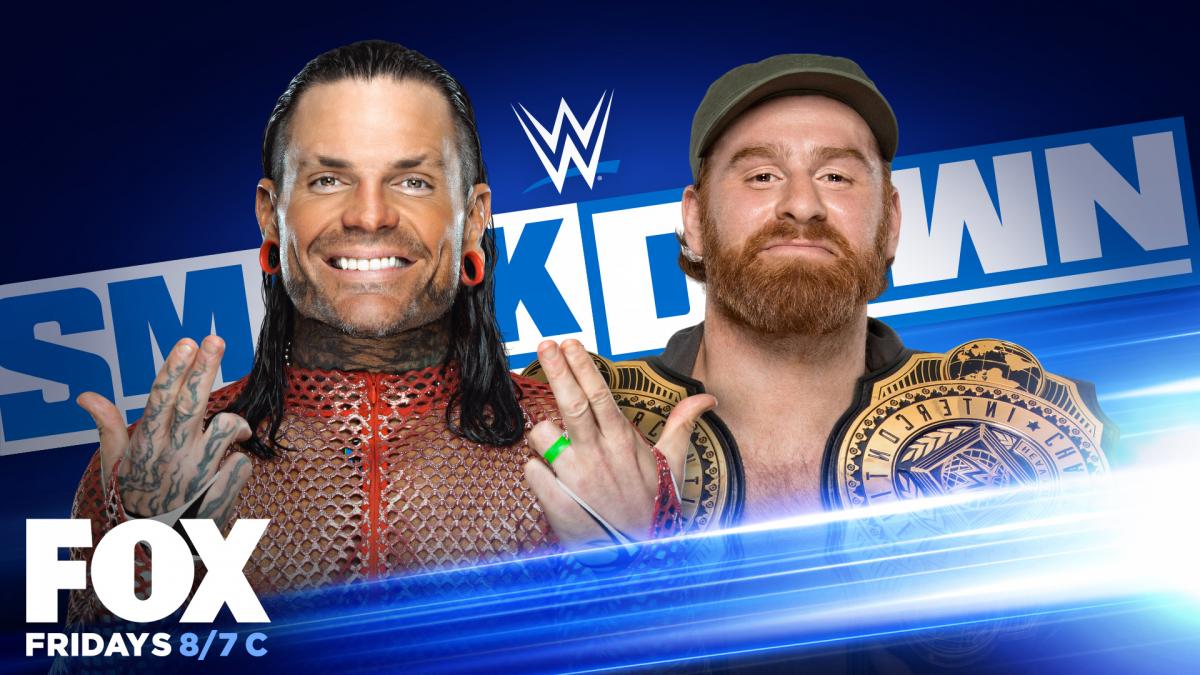 WWE SmackDown kicks off with clips of the Universal Championship match involving Roman Reigns and Jey Uso from Clash of Champions.

Back in the arena, Roman Reigns comes out with Paul Heyman to the ring. Heyman gets on the microphone and says we will have to forgive him as he is a little bit nervous. He has known him and his entire family since the day he was born and he always looked forward to this moment because they all knew this was destined to happen.

Heyman says tonight we are all here to declare Roman Reigns as the Tribal Chief. And not just the Tribal Chief of his own family, SmackDown or WWE but of the entire WWE Universe which is why it’s so necessary that Roman Reigns is your Undisputed Universal Heavyweight Champion. Heyman says to set the stage appropriately with respect to high paramount Peter Maivia, his uncle Afa, his father Sika. Roman extends his hand for the microphone. Reigns says he doesn’t want to be acknowledged as the Tribal Chief because he didn’t acknowledge him but his brother did.

Roman calls Jey out to the ring. Out comes Jey who says he doesn’t know him. He is supposed to be his cousin, blood, family. At Clash of Champions, he showed his true colors. He beat his ass but he didn’t break his spirit. Had Jimmy not thrown in the towel, he was ready to go to war and that title would have been his. Roman says at Clash of Champions, that was the worst night of his career. Professionally and personally. He says all he wanted to do was put Jey in the main event, put his name in the bright lights. Roman says he loves him, he loves him more than his brother loves him. His day one.

You have been there my whole life, all I ever wanted to do was raise you up and all you had to do was acknowledge me. All you had to do were to say the words, acknowledge me as the Tribal Chief. Roman tells him he has worked his ass off and he has earned it. All he wanted was to represent his family to the fullest. To share the main event together and Jey disrespected him. He embarrassed him, his whole family and Roman tells him he broke his heart. Even know, Jey can’t look him in the eyes, he keeps looking at the titles. If he wants another shot, he has one. If he wants it at Hell in a Cell, it’s his at Hell in a Cell.

Roman tells him this match will have the highest stakes that any match has ever had in WWE history. Roman hugs him and tells him he loves him. Roman drops the microphone and leaves the ring. Jey tells him what ever the stakes are, he is on.

Out comes AJ and asks him if it’s over. AJ asks if it really matters who sits at the end of the table. Believe it or not, Jey matters to AJ Styles. He doesn’t want to see him take another beating like he did on Sunday. Why not give someone more qualified to go for the Universal Championship? AJ tells Jey to let Roman be the Tribal Chief and sacrifice a goat if he has to. And every one knows his brother is the better athlete. Jey attacks AJ to the outside. Jey jumps off the announce table onto AJ.

The bell rings and we are under way. AJ goes after Jey but Jey with a right hand. A body slam by Jey. He goes for a splash on AJ in the corner but AJ moves out of the way. A kick to the back by AJ followed by a kick to the face. AJ goes for the cover but Jey kicks out. AJ gets Jey hung up on the bottom rope. AJ goes to pick Jey up but a jaw breaker by Jey. A kick to the leg by AJ takes Jey down. AJ goes for the Styles Clash but Jey drops AJ down and hits him with a clothesline to the outside. Jey goes for the suicide dive but AJ kicks him in the face. He picks Jey up and throws him on the announce table.

Jey gets AJ back in the ring and goes for the splash but AJ gets his knees up. AJ goes for the Phenomenal Forearm but Jey kicks AJ down. Jey with the super kick onto Styles. Jey lands the big splash. He goes for the cover and gets the pin.

Sami is backstage holding two Intercontinental Championships. He gloats about his victory and how it was a great match. He throws one of the championships in the garbage can.

The bell rings and we are under way. Morrison poses on the ropes as Otis runs towards him but Morrison kicks him in the head and slides under the ropes. He gets on the ring apron but Otis knocks him down. Otis gets him back in the ring and stands on top of Morrison. Otis sends Morrison to the ropes and hits him with a clothesline. He throws Morrison across the ring and hits him with the big splash. Otis with the caterpillar. Otis climbs the second rope and lands the Vader bomb. He goes for the cover and gets the pin.

They air a clip from earlier during the day where Big E challenges Sheamus to a Falls Count Anywhere match next week.

Kevin Owens welcomes everyone to the Kevin Owens show. He says he is pumped to be here because after the draft this may be his new home. And he jumped at the chance to come here when WWE management asked him to come host because there’s someone on SmackDown who he actually has a lot of questions for. Even though he is on Raw, he has been paying a lot of attention to SmackDown. He welcomes Alexa Bliss.

We see a clip of last week’s show where Alexa hit Lacey Evans with Sister Abigail. He welcomes Alexa to be on the show and says he has a lot of questions. He says he has seen this change in her, this anger and it reminds him what he saw in his nemesis on Raw Aleister Black. Alexa says she doesn’t know what he means.

Kevin says she isn’t the same women he met five years ago at the Performance Center. That one was always happy and wanted to make people laugh but that’s not her anymore. She tells him people change and he should try it sometime. He says he has been trying to change, he has done a lot of terrible things. But tonight is not about him changing it’s about how she is changing. He needs to understand this darkness that seems to be taking over her. If he can understand what happened to her, maybe he could understand what happened to Black.

Alexa says people fear what they don’t understand. She asks if he has ever been around him. It’s terrifying and captivating. Your spine gets cold when you’re in his presence, she he touches you, your whole body goes numb. And when he looks into your eyes, it’s like he is looking right through you and you can’t look away. She tells him he has no idea what it’s like. Kevin says he doesn’t think they are talking about Aleister Black and he won’t get any answers from her.

Kevin says she is brainwashed. Alexa says yes, her brain has been washed. She has been changed by him, cleaned by him. Kevin says he is here isn’t he as Alexa says he is everywhere and she can hear him now. She tells him to let him in. Kevin stands up as the lights start to go out. The lights turn red and we see The Fiend with the mandible claw on Owens.

Fiend turns his attention to Bliss as he stares at her. He extends his arm to her as she stands up and grabs him by the hand.

Nakamura and Dorado start the match. A hurricanrana by Dorado and a drop kick takes Nakamura down. Out comes Kalisto to the ring.

Back from commercial, Corbin is in the ring with Metalik and with the referee distracted, all three men beat up on Metalik. Cesaro is tagged in and a vertical suplex. He goes for the cover but Metalik kicks out. Nakamura is tagged in. A face lock by Nakamura in the middle of the ring. He lets go of it and knocks Dorado off the ring apron. Metalik with an acrobatic DDT. Corbin is tagged in and as is Riddle. A kick to the face by Riddle as he throws Corbin across the ring. Riddle with a kick to the face. He goes for the cover but Nakamura breaks it up.

Dorado with a stunner on Nakamura. Cesaro is tagged in and he hits Riddle with an uppercut. He goes for the cover but Dorado breaks it up. Corbin is sent over the top rope. Metalik flies over the top rope onto Corbin. Cesaro pushes Dorado to the ropes but Kalisto accidentally knocks Dorado down. The Bro Kick by Riddle onto Cesaro as he goes for the cover and gets the pin.

We see a clip of a blonde woman getting dressed and it’s Carmella. She says she played by your rules, you wanted her to dance and it got her no where. She says then she remembered she is Carmella and better than everyone. Drafted to Raw or SmackDown, this time she is untouchable. Unless she doesn’t want to be.

Sasha Banks is in the ring with a neck brace on. She tells Bayley that her not being medically cleared was not going to stop beating her down at Clash of Champions. Maybe them being together all those years should have taught Bayley how to have a backbone. She calls Bayley a coward and one that needed her time and time again. She was using Banks for her accomplishments, for her achievements. She became the longest reigning SmackDown women’s champion in history.

Banks says she knows Bayley isn’t there tonight because she is afraid of her but next week, it will be them both of them going against each other for the SmackDown Women’s Championship. And they both know that when it comes down to her vs. Bayley and there is no one there to save her, Bayley doesn’t stand a chance. She takes her neck brace off and throws it onto the mat.

The bell rings and we are under way. Zayn gets Jeff in the corner and right hands as the referee pulls him away. A right hand by Jeff followed by a head lock. Jeff with a shoulder block as both men run to the ropes and collide. Jeff gets Sami in the corner and attacks Sami’s injured ribs as Sami rolls to the outside. Jeff throws Sami back into the ring. A kick to the body by Sami followed by right hands. Sami goes to throws Jeff face first into the turnbuckle but Jeff stops as the turnbuckle pad has been removed.

Jeff sends Sami to the outside and lands a baseball slide. Jeff looks around looking for the turnbuckle pad. Jeff jumps off the steel steps and towards Sami but Sami moves out of the way as Jeff lands on the barricade.