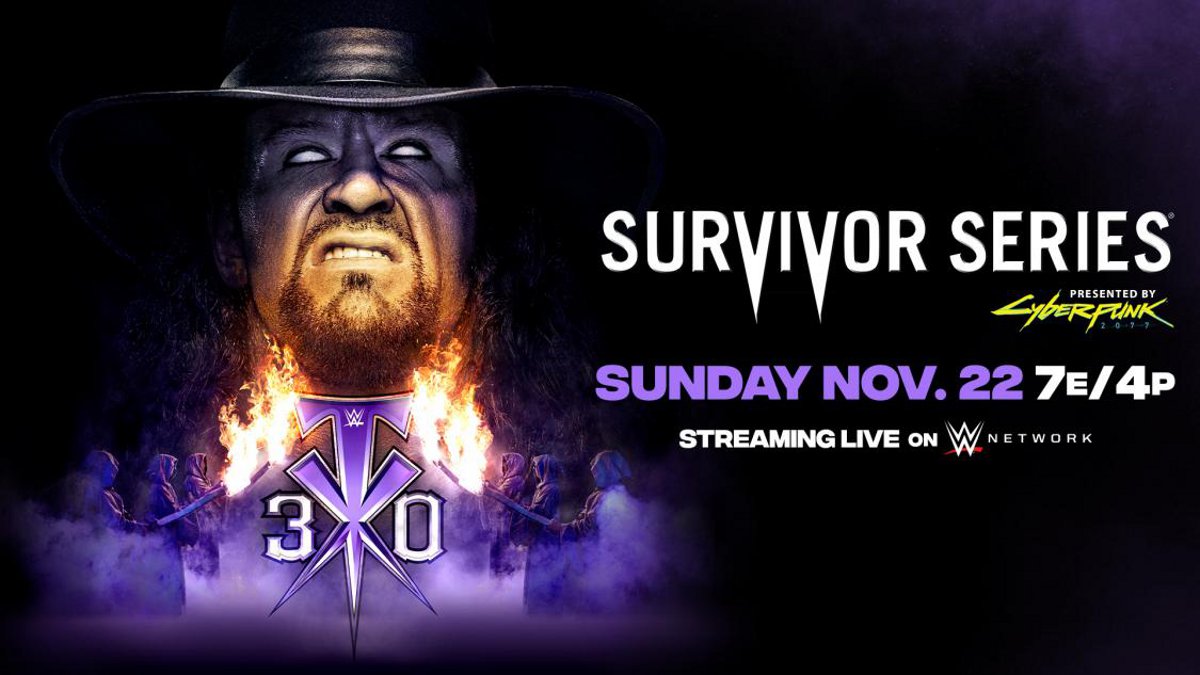 WWE recently announced that this year’s Survivor Series event will feature a special “Final Farewell” ceremony for the Undertaker in honor of his thirty year career in the company.

One of the most iconic Superstars in WWE history and a sports-entertainment phenomenon, Undertaker made his WWE debut at Survivor Series on Nov. 22, 1990. From his debut with Brother Love to his critically-acclaimed match against AJ Styles at this year’s WrestleMania, Undertaker has been involved in some of the most memorable moments in WWE history. The Deadman rose to the top of sports-entertainment with multiple WWE Championship reigns and recorded an astounding undefeated streak at WrestleMania by winning his first 21 matches at the annual extravaganza.

As part of Undertaker’s Final Farewell and 30th anniversary, WWE is celebrating ’30 Years of The Deadman’ throughout November, including recently debuted documentaries ‘Meeting The Undertaker’ and ‘WWE Untold: The Phenom and The Legend Killer’ on WWE Network as well as ‘The Mortician: The Story of Paul Bearer,’ which premieres this Sunday, and ‘Brothers of Destruction,’ which premiered in October at the Austin Film Festival and will stream on WWE Network on Sunday, November 15. In addition, Undertaker will be a special guest on ‘Steve Austin’s Broken Skull Sessions’ immediately following Survivor Series.

Dave Meltzer reported in this week’s Wrestling Observer Newsletter that WWE’s original plans for the Roman Reigns vs. Jey Uso feud on the SmackDown brand was for it to only be a one-match feud ending at Clash of Champions 2020.

Meltzer reported that WWE’s original plans for Reigns at Hell in a Cell was for him to defend the Universal Championship in a Four-way match against “The Fiend” Bray Wyatt, Braun Strowman, and a fourth person who would have been revealed during its build. Meltzer also reported that this was the reason for the tease between Reigns and The Fiend that was never followed up afterwards.

WWE reportedly held a new tryout last week at their Performance Center with Elayna Black and Lacey Ryan among the notable indie talents invited, according to PWInsider. Black has recently made appearances for AEW for their AEW Dark shows while Ryan primarily works for Championship Wrestling from Hollywood and has made appearances for Impact Wrestling in the past.

Another notable indie wrestler is also currently rumored to have recently signed an official contract with WWE. Fightful Select reported (via WrestleTalk) that WWE had been interested in signing Alex Zayne and a deal between the two sides might have been made based on a recent tweet by Game Changer Wrestling. GCW announced on Twitter that Zayne would be making his final indie appearance at their So Much Fun event this Sunday in Atlantic City, New Jersey.

Trademarks for “Ezra Judge” and “Skyler Story” were filed on November 2nd for wrestling and entertainment-related purposes.

Fightful’s Jeremy Lambert reported that Ezra Judge is the new ring name for WWE developmental talent E.J. Nduka although it is currently not known who will be using the Skyler Story name.