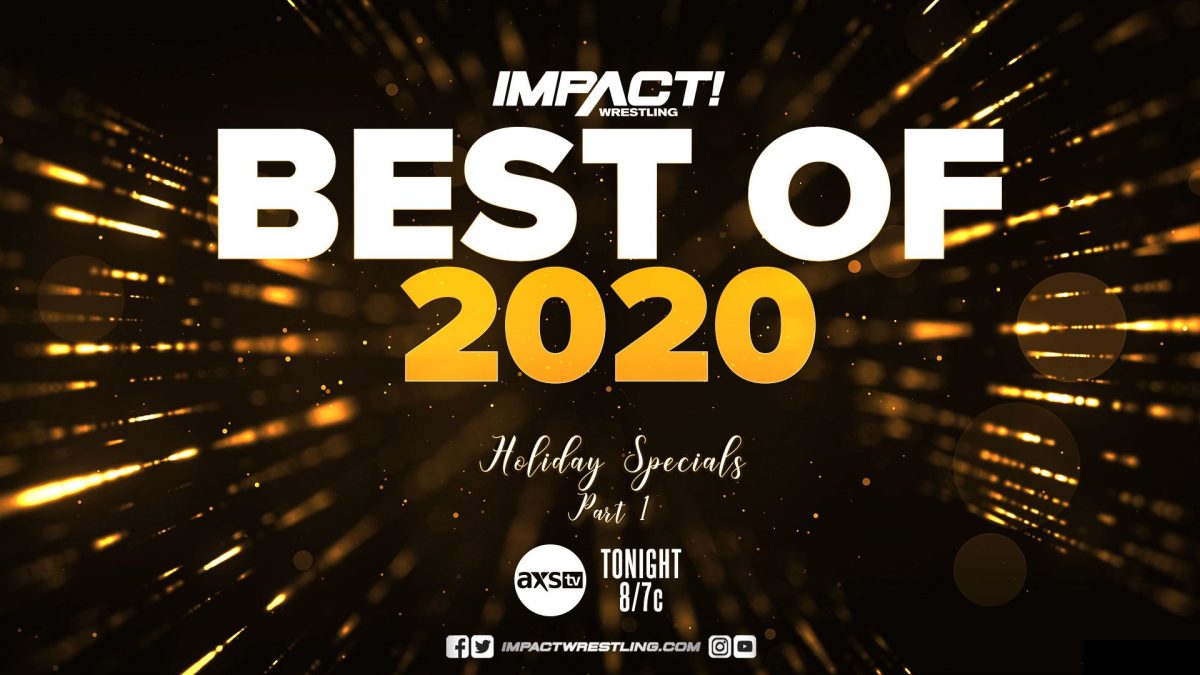 Celebrate the holidays with IMPACT Wrestling! For the next two weeks, join Josh Mathews and Scott D’Amore as they relive the greatest matches and moments from 2020 on IMPACT! on AXS TV. Plus, the winners of the 2020 Year End Awards will be revealed!

(From Hard To Kill 2020)
X-Division Championship
Ace Austin vs. Trey

To kick off what was a historic year in IMPACT Wrestling, Ace Austin put his X-Division Title on the line against Trey Miguel at the first Pay-Per-View event of 2020, Hard To Kill. In the leadup to the match, Ace took a liking to Trey’s mother in an attempt to get into his head. The mind games ended up working as Ace retained the X-Division Title after hitting his devastating signature move, The Fold.

Chris Bey informs Rohit Raju that his X-Division Title rematch against Manik on January 16 at Hard To Kill is now a three-way!

Ace Austin is announced as as the X-Division Star of the year, as voted by you, our incredible IMPACT Wrestling fans! Ace is surprised that he won the award, considering he only spent four months of the year competing in the X-Division, before moving into the World Title picture. Nevertheless, some things are just “Inevitable”.

.@The_Ace_Austin considered his victory as X-Division Star of the Year inevitable. #IMPACTonAXSTV pic.twitter.com/RdfY9pbfsm

(From Turning Point 2020)
Tag Team Championship
The North (c) vs. The Good Brothers

IMPACT Plus exclusive events became must-see in 2020 as titles changed hands and personal grudges were settled. Just weeks after the biggest event of the year, Turning Point took over IMPACT Plus where The North defended the Tag Team Championships against The Good Brothers. On this night, Doc Gallows and Karl Anderson claimed their spot at the top of the mountain as they defeated The North to become IMPACT Tag Team Champions for the very first time!

Tag Team of the Year: The North

The North are voted as IMPACT Wrestling Tag Team of the Year for the second year in a row! Ethan Page is seen leaving a message for Josh Alexander, telling him the good news. Page goes on to apologize for the way he’s been acting and hopes that they can get The North back on track. Meanwhile, Alexander calls Ethan in hopes of doing the same but instead, The Karate Man answers!

.@Walking_Weapon hoped their Tag Team of the Year victory would be what brought him and @OfficialEGO back together… #IMPACTonAXSTV pic.twitter.com/cQpZuM89c0

Taya Valkyrie sends a message to Knockouts Champion Deonna Purrazzo. She praises the “Virtuosa” on her incredibly successful year in IMPACT Wrestling but claims it only happened because they didn’t cross paths until recently. Taya recalls when Deonna and Kimber Lee cost her and Rosemary their semi-final match in the Knockouts Tag Team Title Tournament. The longest-reigning Knockouts Champion in history calls out Deonna Purrazzo and challenges her to a Knockouts Title match at Hard To Kill! Will we see “Virtuosa” vs “Wera Loca” on January 16?

Knockout of the Year: Deonna Purrazzo

Deonna Purrazzo is revealed as the Knockout of the Year! In her acceptance speech, Deonna calls the level of talent on the Knockouts roster incomparable – but so is she. The “Virtuosa” thanks the fans for recognizing what she did to put the Knockouts on the map. Deonna calls herself the greatest technical women’s wrestler in the world and says she is on her way to becoming the greatest Knockouts Champion of all time.

After Sami Callihan joined forces with the “World’s Most Dangerous Man” Ken Shamrock, he renewed his deeply-personal rivalry with Eddie Edwards. The next chapter will be written when they meet one-on-one, January 5 on IMPACT!

.@TheEddieEdwards vs. @TheSamiCallihan has been the DEFINING rivalry over the last three years in IMPACT Wrestling. #IMPACTonAXSTV pic.twitter.com/3kly4YpWsR

In what has to be considered one of the most bizarre rivalries of 2020, Moose and EC3 settled the score in an undisclosed location at Bound For Glory. After an unprecedented turn of events, EC3 helped Moose control his narrative and reclaim his TNA World Heavyweight Championship.

After security broke up a brawl between Moose and Willie Mack last week on IMPACT!, Moose challenged the security guard who inadvertently ripped his shirt to a three minute challenge!

Moose dismissed the security guard as an indie wrestler trying to make a name for himself. We hear from that wrestler in an emotional interview and his name is Matthew Palmer. He says that the reason he ripped Moose’s shirt is because he’s not a security guard – he’s a pro wrestler. Palmer accepts Moose’s challenge for a match. Can he last three minutes with the self-proclaimed TNA World Heavyweight Champion?

Matthew Palmer has stepped up to face @TheMooseNation on the first IMPACT of 2021. #IMPACTonAXSTV pic.twitter.com/WB2fjbnuaM

The bracket for the Super X-Cup is revealed. Ace Austin, Suicide, Daivari, Cousin Jake, Crazzy Steve, as well as IMPACT newcomers Tre Lamar, KC Navarro and Blake Christian all compete for the prestigious trophy! The one night tournament returns at Genesis, streaming January 9 on IMPACT Plus!

BREAKING: The full brackets for the 2021 Super X-Cup at #Genesis have been revealed! pic.twitter.com/PwCwMvIJjG

Acey Romero meets with Larry D who is serving time in prison for shooting John E Bravo. Acey tells him that he’s going to conduct an investigation to prove his innocence. Larry says that when the lights were out during the shooting, they could smell the ring rust cologne that converted Larry into his alter ego, Lawrence D. He suggests that even though nobody could see in the darkness, somebody must have been able to hear something. And who has better hearing than a blind man?

.@THEACEYROMERO visited @legendoflarryd in prison and Larry D INSISTS he was set up. #IMPACTonAXSTV pic.twitter.com/e8DQk1H0GL

What was supposed to be one of the best days in the lives of John E Bravo and Rosemary turned into a tragic event when Bravo was shot at their wedding. After weeks of investigation and the return of Wrestler’s Court, Detective Dreamer revealed that Lawrence D was the shooter!

Eric Young made his shocking return to IMPACT Wrestling at Slammiversary 2020. Weeks later, he dethroned Eddie Edwards to become the IMPACT World Champion. Young would go on to main event Bound For Glory against Rich Swann in one of the most-anticipated IMPACT World Title matches of all time. After aligning himself with Joe Doering, the “World Class Maniac” now looks to rid IMPACT Wrestling of a sickness.

.@TheEricYoung lived up to his reputation as The World Class Maniac since returning to IMPACT at #Slammiversary. #IMPACTonAXSTV pic.twitter.com/YlN7uMPZW4

Wrestling history was made when IMPACT Executive Vice President Don Callis helped Kenny Omega become the new AEW World Champion. Since then, Omega has appeared regularly on IMPACT! programming as he and Callis call their own shots. Last week, Omega laid out IMPACT World Champion Rich Swann to set the stage for Hard To Kill, January 16 on Pay-Per-View. It’s here that Omega will team with IMPACT Tag Team Champions The Good Brothers to face Rich Swann and the Motor City Machine Guns in a huge six-man tag team match!

During a photo shoot, Kenny Omega and Don Callis reminisce about their favorite Christmas memories. But most of all, they consider themselves the Christmas gift to pro wrestling that just keeps on giving.

Wrestler of the Year: Deonna Purrazzo

In an incredible feat, Deonna Purrazzo is revealed as the Wrestler of the Year, in addition to winning Knockout of the Year earlier tonight! The reigning Knockouts Champion has what she needs to call herself not only the greatest technical wrestler in the world, but the greatest wrestler in the world, period. The “Virtuosa” says that despite all the uncertainties of 2020, she conquered everything that stood in front of her – the Age of the Virtuosa begins now.

“It’s about time we enter the age of The Virtuosa.” @DeonnaPurrazzo is the 2020 Wrestler of the Year. #IMPACTonAXSTV pic.twitter.com/VijYSTokdz