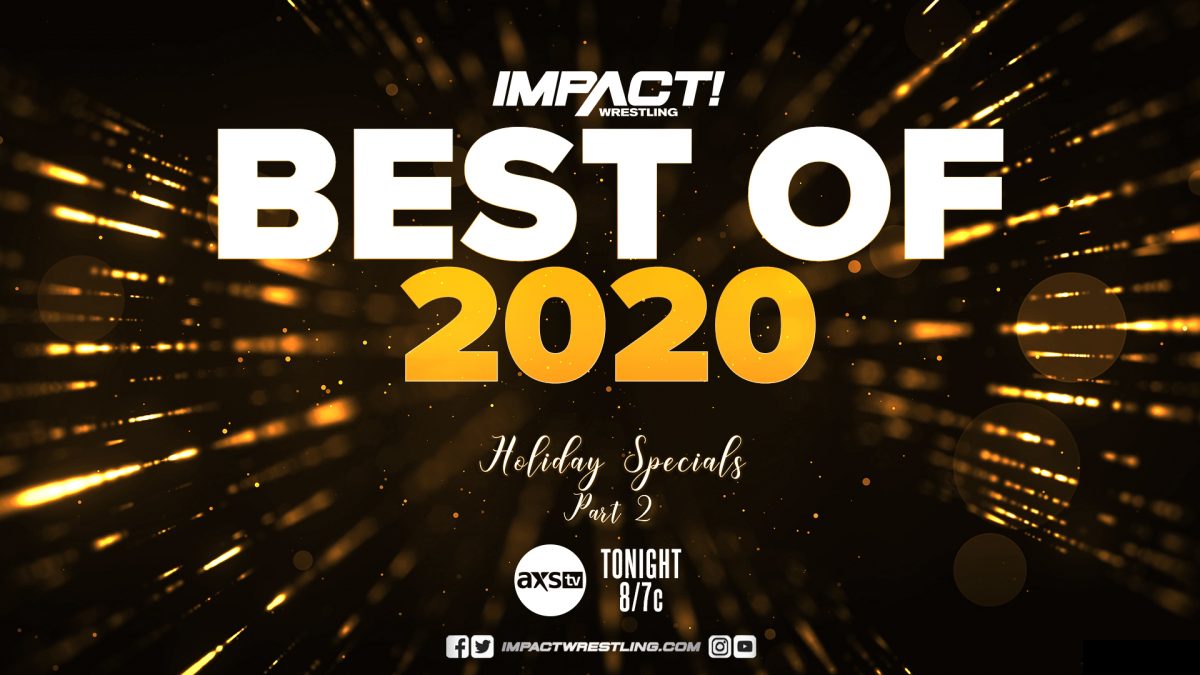 Note: This episode was a recap of Impact’s best moments of 2020.

Tonight’s episode of IMPACT! is dedicated to the memory of Jon “Brodie Lee” Huber.

Tonight’s IMPACT is dedicated to the memory of Jon “Brodie Lee” Huber.

It’s Tuesday. You know what that means. pic.twitter.com/pAxXDBbSyZ

Josh Mathews and Scott D’Amore continue their look back at the year’s greatest matches and moments in Best of 2020 Part 2. Plus, the Year End Awards for Match of the Year and Moment of the Year will be revealed!

Moment of the Year: Slammiversary 2020

Our world changed at Slammiversary 2020 when free agents such as the current IMPACT Tag Team Champions The Good Brothers and Heath arrived and former IMPACT stars like the Motor City Machine Guns, Eric Young and EC3 returned.

At Rebellion Night 1, the self-proclaimed leader of the “XXX-Division” Ace Austin put his title on the line against #1 contender Willie Mack. On this night, the master of mind games and manipulation fell victim to the overwhelming strength and athleticism of Willie Mack as Chocolate Thunder became X-Division Champion for the very first time.

At Slammiversary, Eric Young almost ended the career of Rich Swann with a violent attack during the five-way World Title main event. But it was Swann’s incredible courage and determination that led him back to the ring on his road to recovery. Swann would make his triumphant in-ring return at Bound For Glory where he defeated Eric Young to become the new IMPACT World Champion.

2020 has been an incredible roller-coaster ride for @GottaGetSwann as he came back from injury to become IMPACT World Champion. #IMPACTonAXSTV pic.twitter.com/Yb07sbPhPN

Chris Sabin and Alex Shelley, otherwise known as the legendary Motor City Machine Guns reunited in IMPACT Wrestling when they defeated the Rascalz’ in their open challenge at Slammiversary. Just days after their big return, the Guns found themselves at the top of the tag team division once again as they were victorious over The North to become the new IMPACT Tag Team Champions.

Acey Romero confronts Crazzy Steve to find out if he heard anything that may identify who sprayed Larry D with ring rust cologne to transform him into Lawrence D at John E Bravo’s wedding. After all, it was Lawrence D who shot John E Bravo at the altar. Steve admits that he heard something coming the groom’s side and suggests that Acey connects with his Wrestle House roommate, Johnny Swinger.

What happens when some of IMPACT Wrestling’s most colorful characters are forced to live in a house together? You get the most dramatic and bizarre reality show of all time, Wrestle House.

Wrestling has never seen anything quite like Wrestle House. #IMPACTonAXSTV pic.twitter.com/u3F1S8TZM3

X-Division Champion Rohit Raju had been dodging the challenge of TJP for months. After bending the rules to defeat the master of the Mamba Splash, Rohit relentlessly rubbed it in his face that he would never receive another X-Division Title opportunity as long as he was champion. But at Final Resolution, TJP outsmarted Rohit when his alter ego Manik answered the Defeat Rohit Challenge and went on to defeat the Desi Hitman to become the new X-Division Champion.

The Rock Inducts Ken Shamrock Into IMPACT Hall of Fame

On Bound For Glory weekend, The World’s Most Dangerous Man Ken Shamrock was inducted into the IMPACT Wrestling Hall of Fame by pro wrestling icon, The Rock. Legends from the professional wrestling and mixed martial arts industries delivered special messages to the Hall of Famer, including Bret Hart, Mick Foley, Ariel Helwani, Bas Rutten and Chael Sonnen.

Slammiversary played host to a star-studded main event for the vacant IMPACT World Title featuring Ace Austin, Eddie Edwards, Trey Miguel, plus the returning Rich Swann and Eric Young. The IMPACT Wrestling fans have spoken – this was 2020’s Match of the Year. After a chaotic edge-of-your-seat brawl, Eddie Edwards scored the victory to become IMPACT World Champion for the second time.

.@AEW World Champion @KennyOmegamanX and The Good Brothers w/ @TheDonCallis will appear on IMPACT NEXT TUESDAY at 8/7c on @AXSTV! #IMPACTonAXSTV pic.twitter.com/ul5ZnqTg5c