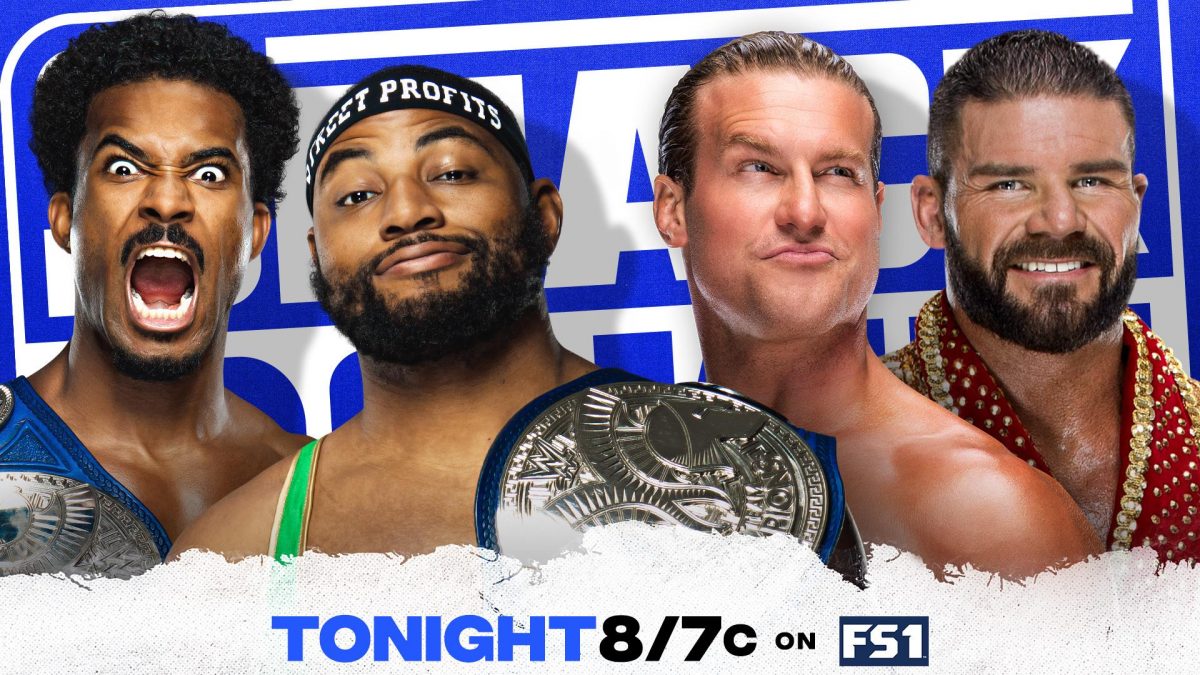 Live in the ThunderDome, Kevin Owens makes his way down to the ring. He grabs a microphone and calls Roman out to the ring. He says that last week, he had a message to send to his family and Kevin says he told his family not to watch his match at TLC. And that’s because he’s afraid of what his family will think and how they will look at him after they see what he does to Roman. He says Roman told Jey that he cares how his sons look at him. But if his kids judge him from his actions over the past few weeks, they already know that their dad is nothing but a hypocrite. Kevin says Roman calls himself the head of the table but he uses his family members of pawns. And that is pathetic. He calls Roman a coward.

Paul Heyman is on the big screen. He tells Kevin to stop already. He says Owens is a martyr. He is willing to pay any sacrifice to become the Universal Champion and that makes him a dangerous competitor. And mutilation won’t stop Kevin, he has to be eliminated, taken out, eradicated.

Kevin cuts him off and tells him that won’t happen. He can’t listen to him anymore. If Roman won’t find him, he will go find Roman.

After commercials, Adam Pearce is backstage with Kevin and he tells him to think about it. Kevin tries to break into Roman’s locker as we hear Roman’s music and he makes his way down to the ring with Heyman. Owens is watching backstage. Both men are in the ring. Heyman hands Roman the microphone. Roman tells Kevin he doesn’t want to hurt him or his family. But he’s running around telling the world that he’s a bad guy. He’s not. He’s just doing the thing that you have to do to be the guy. That’s above Kevin’s pay grade, he tells him to stay in his lane.

Roman tells Owens to acknowledge him as the tribal chief, as the head of his family table and he’s all good. But if he doesn’t, if he just can’t, he won’t make it to TLC or even out of here tonight. Roman tells Owens to apologize. Owens makes his way down to the ring as Jey Uso ambushes him from behind. Roman gets involved and they beat up on Owens on the outside. WWE officials run to the ring to break it up.

Back from commercial, Jey is backstage with Roman. Jey tells Roman that Kevin understands now. Roman says no he doesn’t, he knows his kind. He’s not going to listen or stop. Roman tells Jey to end him, he doesn’t want to see Kevin anymore.

The bell rings and we are under way. Roode attacks Dawkins from behind. Ziggler is tagged in but Dawkins knocks them both down. Ford is tagged in as he goes for the cover but Ziggler kicks out. A running knee to the face by Ford followed by a back suplex. A standing moonsault by Ford as he knocks Roode off the ring apron. Ford on the top rope but a right hand by Ziggler knocks him down.

Ziggler goes for the suplex off the ring apron but Ford blocks it. A kick to the head by Ford who climbs the top rope but Roode pushes Ford off the top rope and onto the barricade.

They double team Ford in the corner. Roode goes for the cover but again Ford kicks out. Ziggler tagged back in. Ziggler squeezes on Ford’s ribs as he gets him down in the middle of the ring. Ford gets to his feet and breaks the hold but a kick to the ribs by Ziggler. Roode tagged back in. Ford throws Ziggler to the outside. Roode runs towards Ford but Ford moves out of the way and Roode slams into the corner.

Ford tags Dawkins into the ring. A clothesline by Dawkins and another. A spinning elbow. In comes Ziggler who is face planted. Dawkins throws Roode across the ring. A running splash by Dawkins on Roode and one on Ziggler. Dawkins with a jumping neck breaker onto Roode. He goes for the cover but Roode kicks out. Dawkins gets Roode in the corner, Ziggler is tagged in. Roode throws Ziggler up in the air and the famouser by Ziggler onto Dawkins. He goes for the cover but Dawkins kicks out.

Roode and Ziggler argue with the referee after the match.

Kevin Owens is backstage with Adam Pearce and a WWE official. Jey Uso hits Kevin from behind with a chair. Jey yells at Owens telling him to stay down.

Bianca Belair is backstage with Kayla. She asks Bianca what a win would do to her. Bianca says a role model is someone you aspire to be. Bayley is someone she intends to beat. Everything Bayley has accomplished, she is the measuring stick but she always has something to say. She says she will beat Bayley tonight.

Kay grabs Liv but Liv gets away and Liv is tagged in. They double drop kick Tamina off the ring apron. They double team Billie Kay. Liv goes for the cover and gets the pin.

In the ring is Carmella’s assistant who has a table setup with champagne. Out comes Carmella to the ring. She grabs a microphone and says that she wants to taste the champagne to see which one she will celebrate with when she wins the WWE SmackDown Women’s Championship. Carmella says that the price tag on her champagne has more digits than a phone number.

Carmella mentions how Sasha is weak and this is the longest that Sasha has ever held on to a Championship. She is in uncharted waters. She is so far over her head that she’s drowning. And not drowning in the bottle of champagne that she broke across her back yesterday. She’s drowning in the pressure of her own expectations and she’s lashing out. She says how Sasha intentionally got herself disqualified last week and that’s how she knows she already has her beat. That’s why she can celebrate. She says Sasha has to prove she is better than her but she’s still going to be so angry that she will lose control and want to rip her apart.

Kevin Owens is backstage with the trainer. In comes Jey Uso who attacks Kevin and throws him through a table.

Otis gets to his feet as Nakamura continues with the kicks. Otis with a clothesline and he slams Nakamura down onto the mat. Nakamura in the corner and a splash by Otis. He goes for the caterpillar as Gable gets on the ring apron and tells him to suplex Nakamura. Otis goes for a suplex but Nakamura with a roll up but Otis kicks out. Both men back up and Otis with a suplex. Otis on the second rope and he splashes Nakamura. He goes for the cover and gets the pin.

After commercials backstage, Gable asks Otis why he didn’t hit him the caterpillar. Otis says he thought it was a test. Gable says it was and he has to rehydrate.

Sami Zayn is on stage and he says the Slammy Awards have been bad lately and that’s why he has the Sami Awards. These awards are for the people. Before they get started, it’s the WWE 2020 year in review. We see a video of Sami Zayn that is narrated by Corey Graves.

Back on stage, Sami says the first award is for comeback of the year. Edge, Roman Reigns and himself. The winner is Sami Zayn. He says it feels good to get a little recognition. He thanks the people.

The match of the year is Sami Zayn’s win at Clash of Champions in the ladder match.

Sami says the Superstar of the Year is and he reads the card and says Big E. Out comes Big E who starts his speech. He thanks his college therapist. Sami says there has been a bit of a mix up as Big E hits Sami and celebrates.

Kayla is backstage with Bayley. She says she heard everything Bianca said about her but she hopes she doesn’t think that she will take it easy on her. Bayley says Bianca ran track in college but she was on the cross country team and was captain of her basketball team in high school but she doesn’t brag about it. Bianca has all the potential in the world but if she were her, she would be more humble.

The bell rings and we are under way. Bayley stomps on Bianca’s foot but Bianca returns the favor. Bayley grabs Bianca’s air and gets it tied in between the ropes. The referee breaks it up. Bianca with a shoulder block. Bayley on the ring apron and she hangs Bianca up on the ropes. Bianca trips Bayley down. She drags Bayley into the ring. She goes for the cover but Bayley kicks out.

A drop kick by Bianca. She goes for an acrobatic move but Bayley moves out of the way and drags Bianca to the outside. She throws Belair into the barricade.

Bayley goes for a suplex but Bianca reverses it into a suplex of her own. Bayley is thrown into the turnbuckle and a spine buster. She goes for the cover but Bayley kicks out. Both women back up, Bianca grabs Bayley and lifts her up. She has her in a powerbomb but Bayley lands on her feet as she rakes Bianca in the eyes. She hits Bianca with the Rose Plant. She goes for the cover and gets the pin.

Roman Reigns along with Jey Uso and Paul Heyman are in the ring. Reigns says he’s been trying to understand why if you had the opportunity to be in the ring with him, the island of relevancy, the main event, a Championship match with Roman Reigns, why would you waste it? This is an opportunity that your kids will talk about.

Kevin’s music hits and he’s barely able to walk down to the ring. Jey runs towards Kevin but Kevin hits him with a chair. He gets in the ring and right hands by Kevin. He goes for the stunner but Jey with a super kick and Roman with the spear. Roman hits Kevin with a chair as Jey throws a table in the ring. They put Kevin through a table. Roman with a Samoan drop through another table. Jey throws a third table in the ring. They continue to beat on Kevin Owens as Roman grabs his belt and walks out.

Kayla is backstage with Roman as Kevin is seen on the screen. He tells Roman at TLC, he will win the Universal Championship or he will die trying.