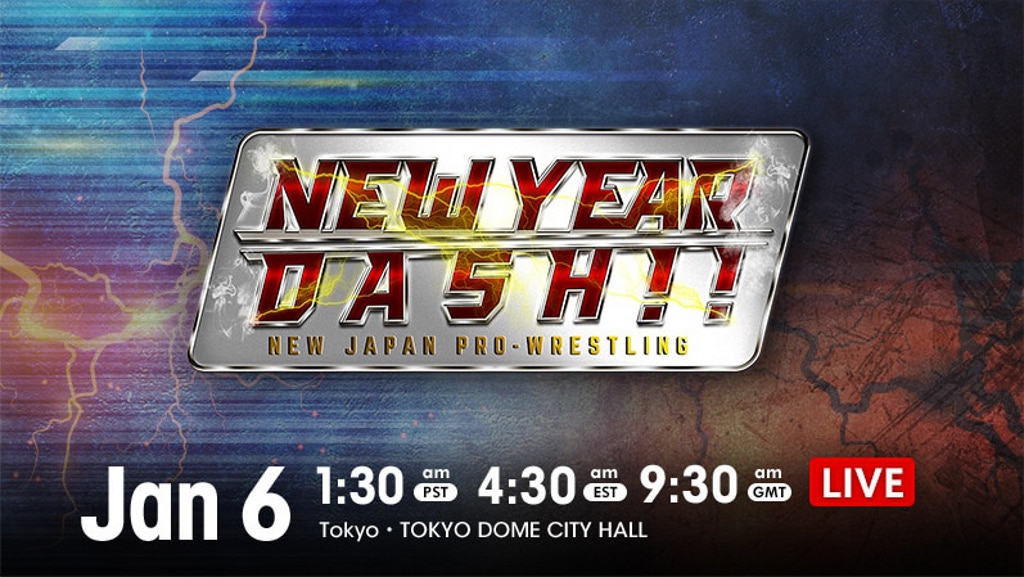 Nagata gave Kidd quite a bit in this opener. Very good work from both men.

Nagata looked to work on the left arm after locking up. Kidd countered and took Nagata down. They did some nice work on the mat. Nagata took control of the bout after a kitchen sink and a running boot in the corner.

Nagata went after the left arm with kicks. Kidd tried for a suplex, but Nagata blocked. Kidd hit a kick, then hit the vertical suplex for a near fall.

Nagata hit a mid kick for a near fall, an exploder suplex, then used Nagata Lock II for the submission.

This was a lot of fun. The interaction between Suzuki and Uemura in particular was a highlight.

Uemura and DOUKI started off, but Uemura made it clear that he wanted a piece of Suzuki. Uemura twice knocked Suzuki off the apron into the barricade. Suzuki then dragged Uemura outside and beat the hell out of him with strikes and a headbutt. Uemura landed a couple of strikes, but the headbutt left him down.

Suzuk tossed Uemura back in and tagged in for the first time. Suzuki continued working over Uemura. DOUKI tagged in to continue the assault on Uemura. DOUKI hit a double stomp for a near fall, as Tiger made the save.

Uemura finally came back with a dropkick on DOUKI and tagged out. Tiger hit a high cross off the top and a tilt-a-whirl backbreaker for a two count. Tiger used a kneebar, but DOUKI reached the ropes. DOUKI hit an enzuigiri into a double down.

Suzuki got a tag and traded strikes with Tiger. Tiger hit a rough-looking butterfly suplex and tagged out. Uemura hit a series of strikes, which Suzuki no-sold. Tiger jumped in to double up on Suzuki. Uemura hit a running forearm for a near fall.

Uemura tried for a crab, but Suzuki powered out. Suzuki used a Boston crab, but Tiger broke it up. Suzuki threw Tiger outside. Uemura hit a dropkick and used two quick cradles for near falls on Suzuki.

Suzuki used a misdirection spot to set up a rear naked choke, then hit the Gotch-style piledriver for the pin.

This was effective in getting The Empre their heat back after all three lost at Wrestle Kingdom.

Empire attacked before the opening bell. Tenzan and O-Khan started out as the legal men as Cobb and Ospreay worked on Kojima and Tsuji on the outside.

O-Khan tried to Mongolian chop Tenzan, the master of the Mongolian chops. Instead, Tenzan blocked and hit a charge in the corner and a brainbuster for a two count. O-Khan came back with a Fujiwara armbar. Tenzan forced a rope break as the brawl between the other four continued on the outside.

O-Khan and Cobb worked on Tenzan in their half of the ring. Ospreay tagged in and continued the attack with strikes. Tenzan hit a wheel kick and tagged Kojima. Kojima hit machine gun chops on Ospreay. Cobb got a tag and hit Kojima with a spin cycle for a near fall.

Kojima hit a cutter on Cobb and tagged out to Tsuji. Tsuji and Cobb traded tackles. Tsuji got the upper hand and hit a splash for a near fall. Kojima and Tenzan jumped in for a triple team on Cobb. Tsuji went for a suplex, but Cobb blocked. Cobb hit a running powerslam for a near fall, as Tenzan and Kojima broke it up.

Ospreay saved Cobb from a TenKoji Cutter. While O-Khan and Cobb held up Tsuji, Ospreay hit him with an Oscutter. Cobb then covered for the 1-2-3.

The Empire contnued their attack after the match. O-Khan hit a tombstone driver on Tenzan. Kojima threw himself on top of Tenzan to save him, but Cobb and O-Khan hit Kojima with stomps.

Ospreay threw the ref out of the ring and hit Kojima with a Hidden Blade.

O-Khan then did his Empire roll call promo.

They did a heavy injury angle with Tenzan, putting him in a collar and taking him out on a back board.

This was more of an extended angle than a match. Its purpose was to set up Phantasmo and Ishimori as challengers for Desperado and Kanemaru’s Jr. Heavyweight Tag titles.

Suzuki-gun attacked before the opening bell to kick off this chaotic brawl. Bullet Club used a kendo stick shot from Jado on the floor to establish the advantage and worked over Desperado. Desperado was cut off in the Bullet Club corner.

Sabre got a tag and got a rare opportunity to show some babyface fire. He tried to strike with Tanga, but Tanga used his power edge to win that battle. Sabre came back with a guillotine. Everyone jumped in and all four Suzuki-gun members used submissions on the Bulet Club side.

Tanga hit Sabre with a spear to set up Phantasmo and Kanemaru tagging in for the closing sequence. Everyone jumped in and hit a big move.

Kanemaru tried to swing a whiskey bottle but Phantasmo ducked the shot. Phantasmo hit one superkick and pinned Kanemaru. The English announcers teased the idea that Phantasmo loaded his boot and that’s why the superkick was so effective.

Phantasmo and Ishimori posed with Desperado and Kanemaru’s title belts after the match.

Owens and Yano began. They did some comedy with Yano’s KOPW trophy. Goto and Yujiro tagged in. The CHAOS side briefly had the advantage. Togo jumped on the apron and all five CHAOS guys pulled him into the ring and pounded on him.

Togo recovered to trip Okada from the floor and allowed Bullet Club to take over. EVIL hit Okada with stomps. White tagged in and got a nice round of applause from the crowd. Fale, Yujiro and Owens tripled up on Okada. Fale covered for a near fall. Ishii tried to save Okada but he got dragged to the floor.

Bullet Club pulled Okada to the floor and continued working him over. Back in, the team continued with a 5-on-1 on Okada. EVIL tagged in for a fisherman buster and a two count. EVIL went for Darkness Falls. Okada escaped and used the Money Clip. EVIL elbowed out of the submission. Okada hit an air raid crash neckbreaker into a double down at the ten minute call.

Ishii and White tagged in. Yano and YH entered for a triple team. Ishii stacked White up with a cover for a two count. Gedo jumped on the apron and gave White a small opening to hit Ishii with a DDT. White followed with a Blade Buster for a near fall.

Ishii escaped a Blade Runner attempt, then hit the Vertical Drop Brainbuster on White and pinned him.

There was no big angle after the match. Gabriel Kidd and Gedo helped White to the back. Bullet Club left. CHAOS celebrated briefly in the ring, then left.

This was a fun main event with a couple of teases for NEVER and Jr. Heavy title programs, with Shingo vs. Tanahashi and Hiromu vs. SHO.

Hiromu and SHO started off with a nice striking battle. Romero tagged in and got a near fall on Hiromu. Romero hit the ropes and Naito tripped him. LIJ turned this into a brawl around ringside.

After the trip, Hiromu isolated Romero in the LIJ corner. BUSHI tagged in and continued the attacke with a chinlock and a rake of the face. Shingo tagged in and cleared the opposing apron. He first feigned as though he was going to leave Tanahashi alone, but he then knocked Tana off the apron as well.

Naito tagged in and hit a combinacion cabron on Romero. Romero came back with a double rana on Naito and BUSHI. He looked to tag Ibushi, but SANADA got a tag and stopped him. Romero then hit a pop-up hurricanrana on SANADA and tagged Ibushi.

Ibushi cleared the LIJ corner and hit a running mid kick on SANADA. Ibushi hit a combination of strikes and a standing moonsault on SANADA for a two count. SANADA tried for a paradise lock and got it on his second attempt at the 10 minute call. He broke the hold with a dropkick.

Tanahashi and Shingo tagged in. They traded strikes. Tanahashi hit a flying forearm and a dragon screw. Shingo blocked a slingblade attempt. Tana ducked a pumping bomber and hit twist and shout. Shingo answered with his own twist and shout.

Shingo hit a series of strikes. Tana hit an open-hand slap to the face. Shingo hit a lariat and tagged BUSHI. BUSHI hit a missile dropkick on Tana. Tana came back with a twist and shout on BUSHI and tagged Wato.

Wato hit a series of kicks on BUSHI. He followed with a springboard uppercut forearm for a near fall. BUSHI ducked a kick. Naito entered for a dropkick. Hiromu hit a dropkick as well at the 15 minute call.

BUSHI went for the MX. Wato avoided it. Romero jumped in and hit a knee. Naito took out Romero. SHO took out Naito. Hiromu hit a thrust kick on SHO. Wato hit a flying mid kick on Hiromu. Wato went for a recientemente but BUSHI blocked.

LIJ jumped in and attacked Wato. BUSHI blocked another recientemente and used a rolling cradle for a near fall.

BUSHI then hit the MX and pinned Wato.

Tanahashi and Shingo, SHO and Hiromu, SANADA and Ibushi all stared each other down after the match.

BUSHI cut a promo, asserting LIJ’s dominance. LIJ then posed for ringside photographers and closed the show with their group fist bump.