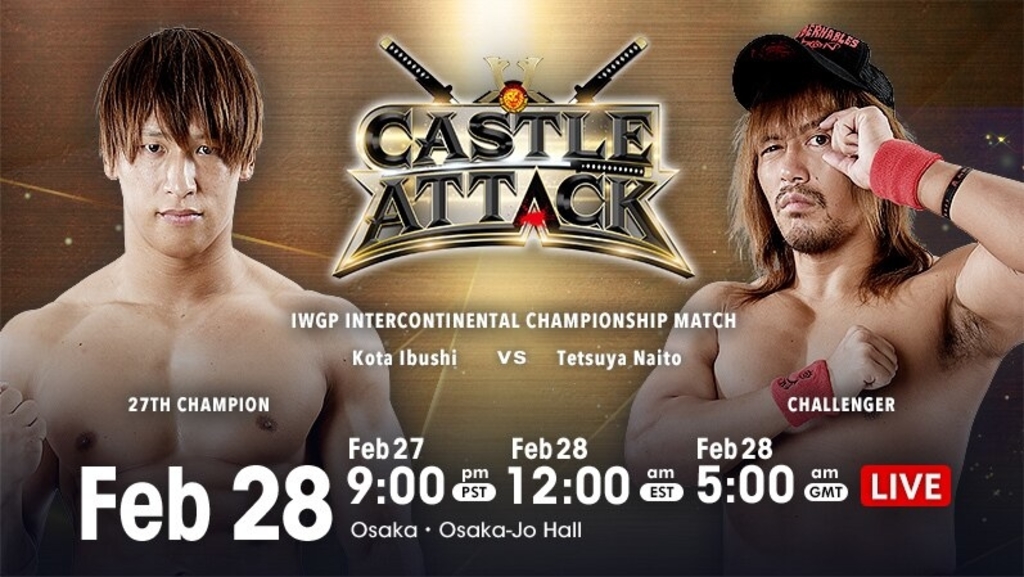 This was a shocking result. The match was quite good.

Kojima and Tenzan overcame a jumpstart before the bell and Kojima ran wild on Ospreay and Cobb. The story they told early was that Cobb and Ospreay didn’t have their timing down as a team yet and they did some miscommunication spots.

Ospreay came back on Kojima with a springboard elbow. Tenzan got a tag and hit a brainbuster. Cobb hit a spin cycle on Kojima. Tenzan jumped in to save Kojima and Cobb abd Ospreay taunted him with Mongolian chops.

Tenzan snapped and fired off a series of Mongolian chops in spite of being banned from using them. This was not a DQ.

Kojima and Tenzan hit a Kozy Cutter on Cobb for a near fall with Ospreay saving. Cobb blocked a Kojima lariat.

Kojima hit Cobb with a lariat on the second attempt and pinned Cobb.

Great selling by Ishii here, but they didn’t have enough time to have much of a match.

Ishii and White started off. White immediately tagged out. Owens tagged in and went to work on Ishii’s ribs, which White worked over yesterday. White and Owens doubled up on Ishii in the ring. EVIL went after Okada on the floor.

Bullet Club used their human centipede abdominal stretch on Ishii. Ishii took on Bullet Club 1-on-3. He hit a drop toehold EVIL who fell on White, then a German on Owens.

Yano got a hot tag. Gedo jumped on the apron and took a bump. Togo exposed a turnbuckle and Yano charged into the exposed steel. Okada got a tag. Owens and Okada were legal as everyone jumped in for a big move and worked towards the finish.

Okada used the Money Clip on Owens and Owens tapped.

This was very good. Everyone worked really hard, the Bullet Club shenanigans were kept to a minimum and the pacing was excellent.

Goto and YH came out firing at the opening bell, landing a series of strikes. Jado jumped in and Goto and YH hit him with their war drums trikes to the back. YH got cut off and worked over.

YH kicked out of a gun stun, a tandem neckbreaker and a Magic Killer. Jado called for a super powerbomb, but YH fought off the attempt. YH rolled out of the way of a frog splash. Goto intercepted an attempt at a diving headbutt and got a hot tag.

Goto hit trademark offense. He landed a wheel kick and bulldog on Tama for a near fall, with Tanga saving. YH and Goto hit a tandem neckbreaker on Tanga. Goto and YH hit the GYW on Tama, but Tama kicked out.

Tanga blocked a GYR on Tama with a German to YH. YH blocked a Magic Killer on Goto and hit a German to Tanga. Goto hit Tama with an ushigoroshi for a near fall. Tanga hit a powerslam on YH. All four were in and down in the ring.

Tama and Goto did a great series of counters and misdirection spots. YH hit a thrust kick on Tama into a fireman’s carry slam from Goto for a near fall. Tanga jumped in and tried a belt shot, but YH blocked.

With the ref’s back turned, Jado hit Goto with a kendo stick. Tama followed up with a gun stun and scored the pinfall victory.

O-Khan just doesn’t have the acumen to pull off a long singles match at this stage of his career, so this was very much a one-man show and effort by Tanahashi. It was good, but it was good because Tanahashi willed it to be.

O-Khan tried for a Dominator right away. Tana blocked and teased a dragon suplex. Tana went for a dragon screw. O-Khan blocked and went for the Dominator again. Tana slid out and hit a dropkick to the left leg.

They rolled outside. Yota Tsuji got involved. O-Khan got in Tsuji’s face. Tana stepped between them. O-Khan held Tana up and dared Tsuji to hit him. Tsuji balled up his fist as though he was considering hitting Tanahashi, but Tana fought free before Tsuji had to make a choice.

Back in the ring, O-Khan went after Tanahashi’s left knee. Tana fought back with a series of strikes, a slam and a somersault senton for a near fall. Tana hit a pair of dragon screws. O-Khan snapped Tana’s neck across the top strand. Tana answered with a dragon screw in the ropes.

Tana used another dragon screw, then applied a cloverleaf. O-Khan forced a rope break. There was a botched spot that was supposed to lead to O-Khan gaining the upper hand. It looked like he missed a knee strike but Tana was forced to sell it anyway.

O-Khan tied Tana to the tree of woe. He hit a gordbuster and two inverted powerslams. O-Khan used the iron claw to set up a Dominator attempt. Tana blocked and we had dueling iron claws. Tana hit a slap with the left hand.

O-Khan shoved the ref in the path of a slingblade. The ref took a bump. O-Khan hit a left hand with a closed fist. O-Khan called for Tsuji to hand him a chair. Tana slid the chair to Tana instead. Tana sat on the chair, then hit a drop toehold on the chair.

O-Khan hit a flying forearm for a two count. O-Khan ended up bleeding from the nose or mouth here. Tana reversed a whip into a slingblade. Tana hit two more slingblades. O-Khan popped up and hit a lariat for a near fall.

O-Khan used an iron claw to set up a modified torture rack into an airplane spin bomb.

O-Khan went for the Dominator. Tana pulled O-Khan over into a crucifix for the flash pin.

This match was incredible. It had everything you would want out of a main event title match and Desperado absolutely deserves the title after really upping his game since Best of the Super Juniors.

ELP got sent outside right away. Desperado gained the upper hand on BUSHI. ELP jumped back in and Desperado suplexed BUSHI on top of him. BUSHI hit a top rope rana on Desperado. He followed with a bulldog-dropkick combo for a near fall.

BUSHI tried a draping DDT on the apron, but ELP blocked and tossed him to the floor. ELP hit a legdrop with Desperado draped across the top rope and got a two count off of it. ELP walked across the top rope. Desperado crotched him. BUSHI hit the hangman’s DDT on Desperado, then a missile dropkick to ELP for a near fall.

ELP and BUSHI went at it in the ring while ringside workers tended to Desperado on the ramp. ELP blocked a codebreaker and tore BUSHI’s shirt off. ELP stood on BUSHI’s crotch in the corner. ELP loaded his boot. ELP hit two quebradas for a near fall.

ELP hit an airplane spin neckbreaker and a frog splash for a two count. Desperado struggled back to the ring and nailed ELP with a spear. Desperado clotheslined ELP to the floor. Desperado hit a suicide flip dive onto both ELP and BUSHI at the 15 minute call.

Desperado tried a superplex. BUSHI cut it off and hit a stacked up powerbomb. BUSHI hit a codebreaker to Desperado for a two count as ELP saved.

BUSHI blocked a superkick with the loaded boot and hung ELP’s leg up in the ropes. BUSHI hit a swinging neckbreaker for a two count on Desperado. BUSHI hit a codebreaker to Desperado. ELP tossed BUSHI outside and covered Desperado for two.

ELP used a Styles Clash for a near fall as BUSHI broke up the pin, then used a crucifix for two on ELP. ELP hit a v-trigger to BUSHI, then one to Desperado. Desperado blocked a One-Winged Angel and used el es culero for a near fall.

Desperado caught ELP in Numero Dos. ELP reversed into a cradle for a near fall. ELP blocked Pinche Loco. Desperado hit an Angle slam for a two count at the 20 minute call.

BUSHI came off the ropes with an MX attempt, but got caught with the loaded boot. BUSHI rolled outside and ELP could not follow up. Desperado ducked a superkick and hit a right hand.

ELP turned a Pinche Loco into a back-to-chest cover for a two count. Desperado bridged out and hit Pinche Loco. Depserado rolled through and hit a second Pinche Loco and pinned ELP.

No one appeared to be seriously injured and that’s always the most important thing when these two go at it. A very good main event.

As they have in their tag battles on this tour, they opened with five minutes of very good mat wrestling. Naito then fired off a series of strikes in the corner. Ibushi avoided a combinacion in the corner, but ran into a Naito basement dropkick to the left knee.

Back inside, Naito applied a figure four. Ibushi forced a rope break at the ten minute call. Naito continued working on the knee, driving it into the mat. Ibushi hit a dropkick, then a flying mid kick with the right leg for his first significant offense. Ibushi hit a standing moonsault for a near fall.

Naito dropped Ibushi with a slap. He followed with a basement dropkick for a near fall. Naito went back after the leg with stomps. Naito hit a combinacion cabron and posed. Naito hit a neckbreaker for a two count.

Naito used a crucifix submission. Ibushi fired off a flurry, but Naito answered with a swing DDT. They traded strikes. Naito went back after the knee. Naito used an ankle lock and grapevined the hold. Ibushi forced a rope break.

Naito hit a diamond dust and Gloria for a near fall at the 20 minute mark. Naito teased a reverse frankensteiner off the top rope. Ibushi slid out and knocked Naito to the mat with strikes. Ibushi kicked Naito to the apron and teased a straightjacket German back into the ring. Naito blocked the straightjacket, but Ibushi hit a regular German off the second rope back inside for a near fall.

Ibushi hit a bomaye and a last ride for a two count. Naito blocked a Kamigoye and hit valentia into a double down. Naito hit a series of elbows to the back of the neck, looking to set up Destino. Ibushi blocked an elbow and hit a thunderous lariat.

Ibushi hit a third Kamigoye and this time it was enough for the 1-2-3.

El Desperado made his way to the ring after the match to challenge Ibushi for the main event of Thursday’s Anniversary show.

Desperado said he finally won the IWGP Jr. title tonight, but the first time he had challenged for that title was years ago against Ibushi here in Osaka.

Ibushi said anytime, anywhere, he accepts the challenge. He said he remembers that match with Desperado, and Desperado sucked back then. Ibushi said he’s a different man today and again said he’ll accept the chalenge at the anniversary show.

Ibushi thanked the fans and closed the show by posing with his titles.