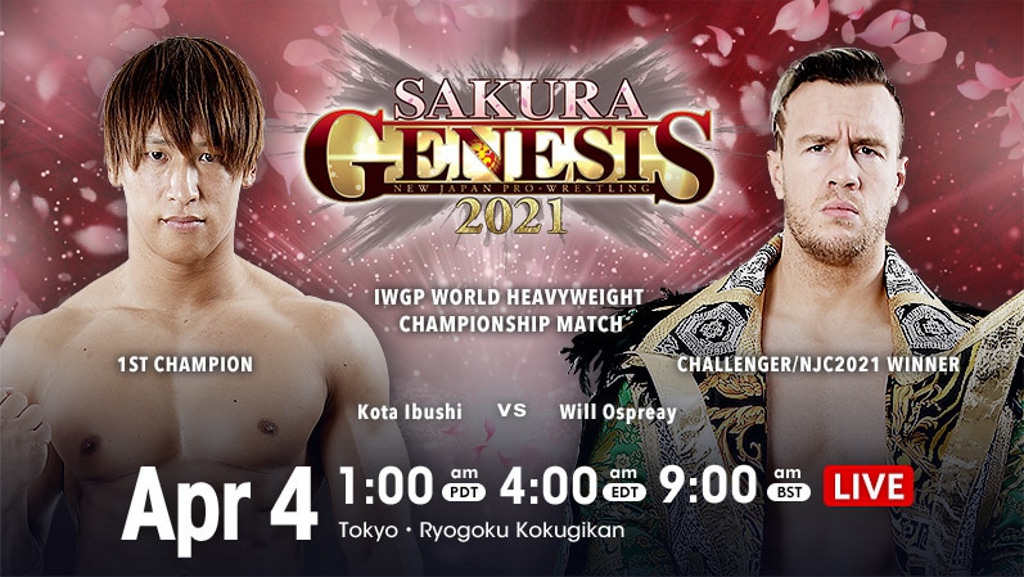 Hiromu Takahashi ran out to the ring to kick off the show. He cut a promo and said that he was not ready to return to action, but would be joining the Japanese broadcast team for the show. He previewed the card and called Will Ospreay “a dirty, stinking cat.”

The IWGP Heavyweight Tag champs were pinned, setting up Taichi and Sabre as their next challengers. The match was not good. There was energy, but far too much Jado and DOUKI.

The teams began brawling before the bell. They fought around ringside. Jado and DOUKI paired off in the ring and began as the legal men. Jado cut DOUKI off and used a chinlock. There was a long heat segment on DOUKI.

DOUKI came back with a swing DDT to Tama. Taichi got a tag and choked Tama. Tanga broke up the choke. Taichi then began to choke him. Taichi went after Jado on the apron and choked him as well. Tama hit a Tongan Twist to Taichi. Taichi hit a gamengiri into a double down.

Tanga and Sabre got tags. Sabre tried a guillotine, but Tanga powered out. Tanga ate a series of uppercut forearms, but no-sold and backed Sabre into the corner. Sabre got an armbar applied, but Tanga reversed into a crossface. DOUKI broke up the hold.

Jado jumped in wth a kendo stick. Tama entered with the iron fingers. The match broke down, leaving Sabre and Tanga scrambling. Sabre used a European clutch and pinned Tanga.

Chairman Sugabayashi took possession of the iron fingers after the match, angering Taichi.

This was another brawl that was heavy on the comedy.

The CHAOS side attacked before the opening bell and briefly got some shine. Bullet Club gained the upper hand after Ishimori cut off Goto. Goto managed a tag to YH, but YH was then cut off and worked over.

Bullet Club exposed the turnbuckle in their corner and repeatedly sent YH into it. KENTA tagged in and teased hitting YH with YH’s bo staff, which KENTA stole earlier in the tour. YH got the staff back. Ishii and Yujiro got tags.

Ishii hit a powerslam to Yujiro. The match broke down and everyone jumped in. Yujiro hit an Angle slam on Ishii and tagged EVIL. EVIL sent Ishii into the buckle. Ishii then whipped EVIL into the exposed buckle and tagged out.

Yano tagged in and exposed a second buckle. He rolled EVIL up for two. Togo hit Yano from the apron. EVIL sent Yano into one of the exposed buckles. Togo tagged in.

Bullet Club went 5-on-1 against Yano. EVIL hit a fisherman buster. Togo choked Yano with his ligature. EVIL took the ref. Yano hit a low blow to Togo and placed a hood over Togo’s head, then rolled him up for the pin.

KENTA, Yujiro and Ishimori faced off with the NEVER Six-Man Champions, Ishii, Goto and YH. KENTA stole YH’s staff again as Bullet Club made a hasty retreat after the defeat.

Toa Henare, now going by “The Ultimate Weapon” Aaron Henare, was revealed as the mystery man and newest member of United Empire. It’s a better spot for him than being basically a Young Lion, but we’ll see how it plays out in the long run.

Henare changed his look up a bit, wearing sunglasses to the ring, gloves and long tights rather than trunks.

Empire cut Naito off and worked on him for the bulk of the early part of the match. Naito hit an enzugiri and tagged Shingo. Shingo and Henare exchanged power spots. Shingo hit a vertical suplex and Cobb tagged in.

Cobb and Shingo had a nice sequence. Shingo is the best guy in the company right now and it’s not particularly close. SANADA got a tag. He tried for Skull End, but Cobb turned it into a pop-up powerbomb.

Empire went 3-on-1 on SANADA. Henare tagged in and used a blue thunder bomb for a two count. SANADA got Skull End, but O-Khan broke it up. Naito jumped in, but got sent outside after an O-Khan tackle. Cobb caught an interfering Shingo with a spin cycle.

Cobb hit Tour of the Islands on SANADA. Henare followed up with a death valley bomb for the pin.

Cobb and Henare continued attacking SANADA and Shingo after the match.

Cobb and Henare then held Naito down. O-Khan repeatedly hit Naito’s right knee with a chair.

The segment closed with United Empire posing over the fallen LIJ and O-Khan doing his roll call promo.

This was good. White and Tanahashi are the second and third best guys in the company right now, the order just depends on the night.

Tanahashi and White began with a crisp exchange. Kojima tagged in for a double tackle. Kojima and Tana flexed their pecs as they breifly had the upper hand.

Kojima went for a top rope elbow, but Gedo tripped him. White took over and mocked Kojima with machine gun chops. Kojima came back with a cutter before tagging out.

Tana hit White with a flying forearm. White blocked a slingblade attempt. They used a series of standing switches. White used a hair pull to set up an inverted dragon screw. White hit Tana with a Blade Buster for a near fall.

Tana kicked out of a cloverleaf attempt, then hit White with a dragon screw. White knocked Kojima off the apron to prevent a tag, then tagged Fale. Fale hit Tana with an elbow drop for a two count. Tana blocked a Grenade. Fale hit a lariat.

Fale went for a Bad Luck Fall, but Kojima saved. Tana hit White with a slingblade. Tana hit twist and shout to Fale. Kojima hit Fale with a lariat.

Tana followed with High Fly Flow for the pin.

White tried to attack Tana after the bell, but got caught in a cloverleaf. White tapped furiously.

Tanahashi cut a promo in English after the match. He said he accepts White’s challenge for the NEVER title, because Jay tapped to his Texas clover hold, the JTO.

SHO and YOH entered first to new music. This was a vast downgrade from their Roppongi 3K rap by Rocky Romero.

They did a completely different match than I expected, building the whole thing around SHO and YOH selling. It was psychologically sound, but much slower than you would think. The last five minutes were very good.

YOH and Desperado began. YOH briefly had the advantage, but Desperado caught him in Numero Dos and went to work on the left leg. SHO and Kanemaru got tags and the Suzuki-gun side took the fight to the floor. SHO and YOH were whipped into the fence.

Kanemaru worked over SHO’s lower back. SHO managed a double spear and tagged YOH. Kanemaru went back after YOH’s left leg with a chop block and a figure four, but YOH reached the ropes for a break.

Kanemaru hit a moonsault and Deep Impact. SHO broke up the pin. YOH cradled Kanemaru for a two count. YOH blocked a kick and hit a Pele kick. Desperado speared YOH. SHO hit Desperado with a German. Desperado hit a spinebuster to SHO. All four men were down as they passed the 15 minute mark.

SHO and YOH hit their stereo jumping knees to Kanemaru. YOH hit Kanemaru with a one-legged dropkick. Desperado and SHO traded strikes. Desperado got hit with a 3K.

Kanemaru and YOH were still the legal men. YOH climbed to the top rope, but Kanemaru whipped SHO into the corner to stop YOH’s attack. Kanemaru hit a superplex for a near fall.

Kanemaru went for a second Deep Impact, but jumped into a superkick from YOH. SHO hit a lariat to Kanemaru. SHO and YOH hit Strong X to Kanemaru, but Desperado broke up the pin.

YOH hit something resembling a butterfly suplex and got the pin.

YOH cut a promo after the match and said that it’s been a long journey, but the IWGP Jr. Tag titles are back where they belong. He then said he wants to face Desperado for the IWGP Jr. Heavyweight title.

A very good main event. The time flew by. I expected that Ospreay would get the title and be positioned as the top foreign heel that they really haven’t had since Kenny Omega, but I didn’t expect it to happen tonight.

Two of the great high flyers of all time opened with mat wrestling. Ibushi broke cleanly on a waistlock after Ospreay reached the ropes. Ibushi got the better of another mat sequence.

Ospreay regained control with a backdrop on the barricade and a knee drop on the apron. Ibushi made it back in after a countout tease. Ibushi made it back in after a second countout tease. Ospreay applied a head scissors on the mat, but Ibushi forced a rope break. Ibushi sold the damage to his neck and back from the backdrop and the head scissors.

Ospreay used another kravate in the ring. Ibushi tried to fire up the crowd. Ospreay hit a slam. Ibushi countered with a dropkick. Ibushi reversed a whip and hit a flying mid kick. Ibushi landed a standing moonsault for a near fall.

Ibushi hit a suplex out of a roll-up grip, then bridged for a near fall. Ibushi hit some kicks. Ospreay came back with a handspring kick. Ospreay tied Ibushi to the tree of woe and hit a dropkick.

Ospreay hit pip pip cheerio for a two count. Ospreay teased a bloody sunday, but Ibushi grabbed at Ospreay’s broken nose to stop it. An intricate series of counters and reversals ended with Ibushi hitting a lariat. Ospreay took a flip bump. Ibushi hit a last ride for a near fall.

Ibushi escaped a Chelsea Grin. Ospreay went for a handspring kick. Ibushi looked as though he was going to catch Ospreay and lawn dart him into the buckle, but Ibushi slipped and they botched the spot. Ibushi tried again, but slipped again and they fell to the mat in a heap.

Ibushi went for a top rope poison rana, but Ospreay landed on his feet out of the move. Back in the center of the ring, Ibushi hit a poison rana. Ospreay rolled outside. Ospreay beat the count back in.

Ibushi hit a German from the second rope, suplexing Ospreay back into the ring. Ospreay landed right on his head. Ospreay kicked out at two. Ibushi went for a bomaye, but Ospreay turned it into a Spanish Fly.

Ibushi went for a third Kamigoye, but Ospreay cradled him for a near fall. Ospreay hit a v-trigger and a Hidden Blade, then hit a Stormbreaker for the pin.

Winner: Will Ospreay via Pinfall to become the new IWGP World Heavyweight Champion.

Cobb hit Ibushi with a Tour of the Islands after the match.

Ospreay cut a promo. He said he wants to take this time to apologize — to absolutely nobody. He said Unted Empire has all the power now. He said he wants revenge for what happened at Wrestle Kingdom and called out Okada.

Okada came to the ring. Okada grabbed a mic and fired up the crowd. Shingo Takagi then appeared and took the mic from Okada.

Shingo said Ospreay wants revenge for losing to Okada, but nobody remembers that match. He said that people remember that Okada lost to Shingo in the New Japan Cup. Shingo said if Okada gets a shot, he should get a shot first.

Shingo, speaking English, challenged Ospreay for the title. He said when he beats Ospreay, Okada can challenge Shingo next.

Ospreay took the mic. He said first, Shingo, then he’s coming for Okada.