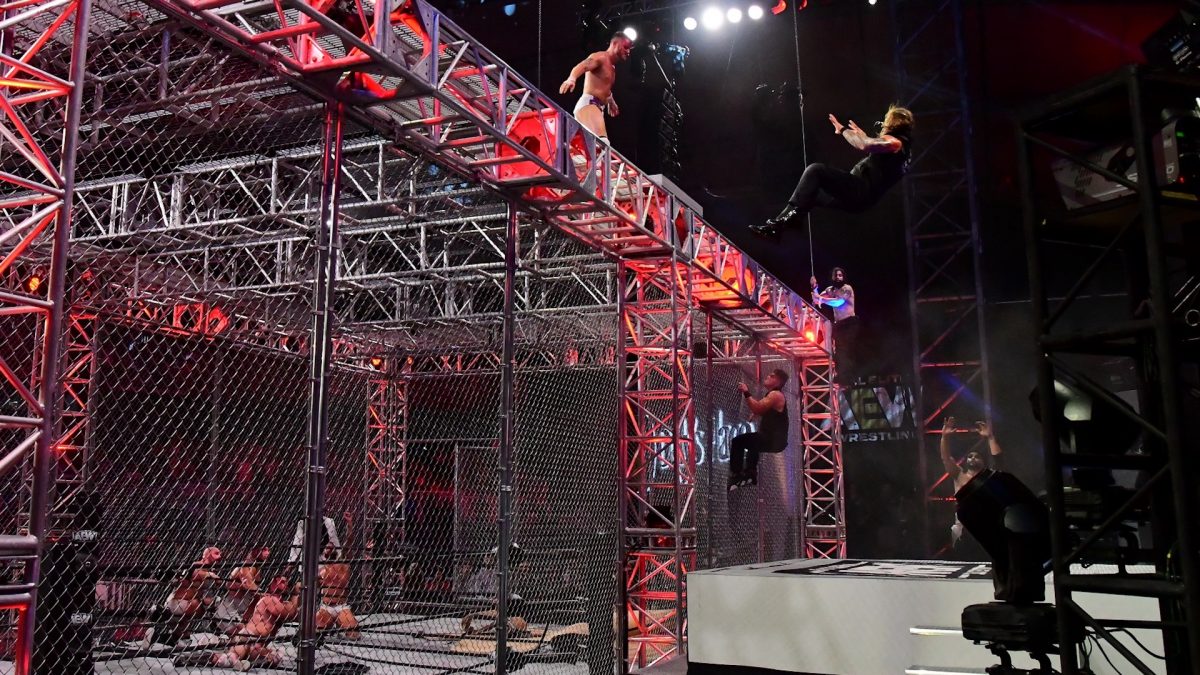 Chris Jericho suffered a dislocated elbow from his fall off of the cage at Blood & Guts last week, according to the Wrestling Observer Newsletter, so Jericho’s arm brace that he was wearing on Dynamite on Wednesday was for a legit injury.

Jericho will presumably still work in the Stadium Stampede match at Double or Nothing on May 30, but otherwise is expected to be out of in-ring action for 4-6 weeks, the Observer says.

Jericho talked about the fall during his Talk Is Jericho podcast last week.

I was really nervous, all day long. I’m not about taking crazy bumps like that, but it was the perfect way to continue the story. A few weeks prior, a month prior, we kind of came up with the idea, along with Tony and MJF, about what to do. When you’re doing a live stunt show — we’ve seen instances where stunts do go wrong, there is no second take, it’s live. There is an element of danger, which I think people have become desensitized to because they’ve seen everything so much. It almost demeans stuff that happens, even in the ring with high spots because people make it look so easy, people forgot how hard it is and the margin for error. We figured out a way to do the fall and the idea was to gimmick the stage. I thought the fall looked amazing, maybe because I was the one who took it and I knew how scared I was. Not scared, but nervous. There’s an element of worry. Earlier in the day, when they’re building everything, they had a big giant air mattress about ten feet high. I was like, ‘wow, that looks like an easy fall.’ Sammy was falling into it and was like, ‘Do you wanna try?’ I wanted to save it for later. Turns out, they were just testing it for the trajectory.

It was a black gym mat, about six inches high from the bottom, and it was a bunch of cardboard boxes, just empty cardboard boxes. That’s what professional stuntmen fall on and we had a stuntman there. He orchestrated the bump Kenny and Sammy took at Stadium Stampede. Then there was plywood and decoration, like a flat piece of plastic, that looked like a steel grate. That was it. It went from being a ten-foot air mattress to a thing that was three feet off the ground, which made the fall about 18 feet. I watched the stunt guy take the fall and he had a ‘turtle shell’ to protect his back and a helmet. I didn’t get a helmet. He told me to take a step off, not to flip back, which was what happened when I took the powerbomb from Wardlow off the stage. I watched him do it and videotaped it to watch a bunch of times. We made a couple of additions on top of the cage because originally it was a step down with a gap in the middle, so we built a platform up there so it was more of a step just to be safer. There was a lot of praying and you just think, ‘this could be it.’ The other time I felt this way was when I took the bump into the thumbtacks.

I tell Max, ‘Give me a shove’ because I needed to feel something so I could take a pushback. I step back and I thought the bump would go by fast, but I just kept looking at him as I fell. Then, I landed, and of course, it takes the breath out of you. I’ve seen a few people bagging on it being a crashpad. It was no crashpad, it was a cardboard box. I don’t give a shit if it was a crash pad, you just go for it. It felt great, obviously, it hurt, but I could move my arms and legs and I wasn’t dead. The crowd went completely silent and I just laid there until they took me away on a stretcher and the people started clapping. It was later on that I started hearing ‘the fall didn’t look great.’ For me, when I watched it back, I thought it looked amazing. When you watch it back, I barely missed hitting my head on the lights on the stage. I almost overshot everything. Everyone in the business knows how dangerous this can be and how terrifying it is and the margin for error is slim. You have the right to bag on it. Out of the 1.3 million who watched, if 3,000 people didn’t like it, that’s a very small percentage. Most people thought it was crazy and I got great feedback.

I hope you enjoyed it because you’ll never see me do it again. I’m glad it turned out the way it did. I wouldn’t change anything.

h/t: Fightful for the transcript