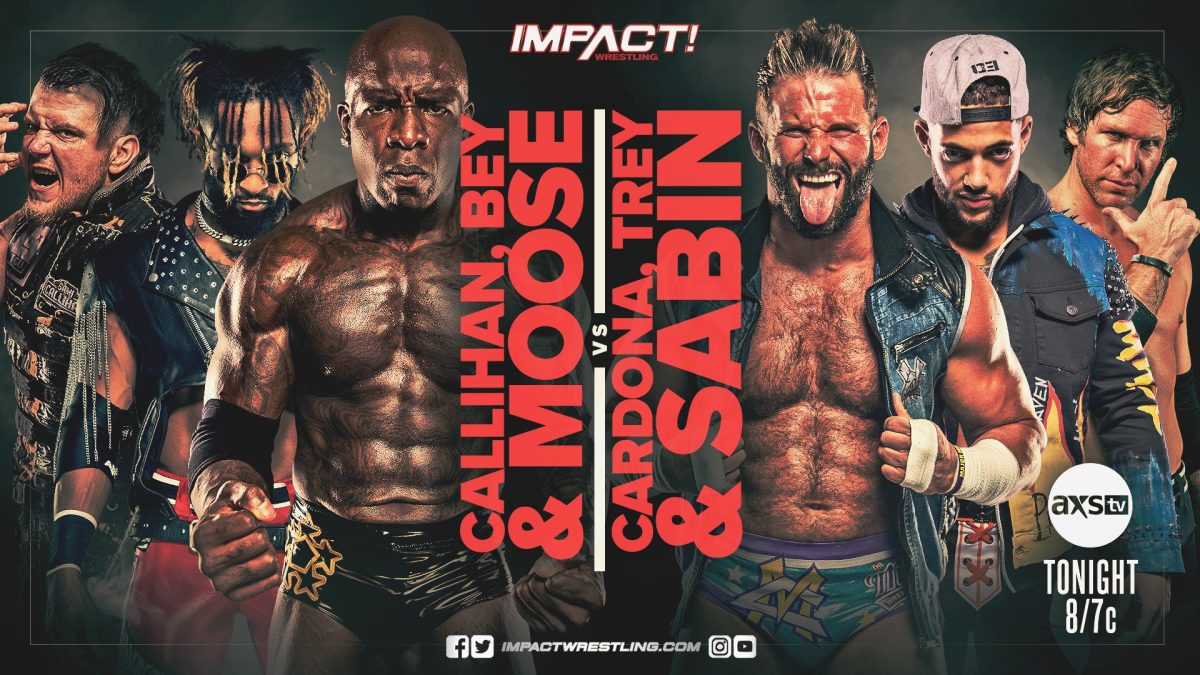 May 13, 2021
Nashville, TN
Results by ImpactWrestling.com

The winner of this match will challenge Deonna Purrazzo for the Knockouts Title this Saturday at Under Siege on IMPACT Plus! It’s a stalemate in the early going as both Knockouts avoid each other’s offense. Havok hits a running boot in the corner to gain control. Havok pummels her opponent with repeated strikes! Momentum shifts when Rosemary launches Havok into the air, then connects with a Spear for two! Havok hits her signature Tombstone Piledriver to win the match and become #1 contender for the Knockouts Title!

After the match, Deonna Purrazzo jumps Havok from behind but quickly regrets her actions when she’s cornered by Decay! Rosemary, Black Taurus and Crazzy Steve hold off Kimber Lee and Susan as Havok takes out Purrazzo with a Tombstone Piledriver!

Another match, another huge opportunity as the winner will go on to face Josh Alexander for the X-Division Title at Under Siege! El Phantasmo hits Ace with a top rope Death Valley Driver, crashing into everyone on the floor! Petey connects with a Canadian Destroyer on TJP. Rohit takes out Romero with a jumping knee. It’s anyone’s match as Ace hits a Fosbury Flop to the outside. Madman Fulton and Larry D clash at ringside and they’re not in even the match! TJP connects with the Detonation Kick on Petey. Phantasmo plants Petey with a double underhook slam to score the victory and become #1 contender for the X-Division Title!

Susan confronts Scott D’Amore and demands a tag team match pitting her and Kimber Lee against Taylor Wilde and Tenille Dashwood at Under Siege! Susan is out to prove that Wilde and Dashwood are in cahoots with each other.

Eric Young announces that Violent By Design has devised a new plan – one that is more violent than ever.

After coming up short in the #1 Contender X-Division Scramble, TJP, Ace Austin, Acey Romero and Rohit Raju all lay claim to the #1 contendership for the IMPACT World Tag Team Titles! Inside Swinger’s Palace, Johnny Swinger persuades John E Bravo to get a match made for Under Siege.

Willie connects with his go-to standing Moonsault in the opening moments of the match! Willie is in control for several minutes when Beale begins to fight back with a series of boots. Willie hits a pop-up forearm, followed by the Frog Splash to win.

After the match, Willie Mack is blindsided by W. Morrissey who lays him out with a big boot. The two will meet in singles action this Saturday at Under Siege!

In a backstage interview with Gia Miller, Eddie Edwards admits that Kenny Omega was the reason he and IMPACT World Tag Team Champions FinJuice were laid out in a post-match attack also involving The Good Brothers last week. Eddie’s solution is to bring a Kenny of his own tonight – Kenny the kendo stick!

It’s time for another edition of Tenille Dashwood’s new talk show, All About Me! Special host Taylor Wilde barges onto the set and tells Dashwood that she doesn’t want her interfering in her matches anymore. Despite the friction, the two are set to team up against Susan and Kimber Lee this Saturday at Under Siege.

All About Me returns with special host @RealTaylorWilde.

It went about as well as all the rest of @TenilleDashwood‘s attempts to recruit Taylor Wilde as a partner. #IMPACTonAXSTV @kalebKonley pic.twitter.com/ga30RZlHEW

Who will gain momentum heading into Under Siege where Kenny Omega and The Good Brothers battle Eddie Edwards and FinJuice in a star-studded six-man tag? Omega and Gallows trip up Finlay from ringside but turnabout is fair play as Juice does the same to Anderson! Anderson distracts the referee, allowing Omega and Gallows to attack Finlay on the outside. Anderson begins to wear Finlay down with a reverse chokehold until Finlay breaks free with a back suplex. Finlay takes out Omega and Gallows with a slingshot crossbody! Finlay locks in the Indian Deathlock but Omega jumps him to cause the disqualification.

A brawls breaks out but Eddie Edwards uses Kenny the kendo stick to even the odds, sending Kenny Omega and crew retreating up the ramp!

Rachael Ellering refocuses Jordynne Grace after she fell to Tasha Steelz earlier tonight on BTI. Ellering and Grace will defend their Knockouts Tag Team Titles against Fire ‘N Flava this Saturday at Under Siege!

Before Brian Myers goes one-on-one with Black Taurus at Under Siege, he must first get through Crazzy Steve tonight! Steve cranks his neck, then charges into the corner. Myers retreats to the floor and pretends that Taurus pushed him to the floor, tricking the referee into ejecting him from ringside! Steve attempts a springboard but Myers cuts him off with a mid-air dropkick. Myers rolls up Steve with his feet on the ropes to steal the victory.

After the match, Taurus returns to the ring and delivers a spear to Myers!

Before they collide in the 6-Way #1 Contenders match at Under Siege, these six competitors go head-to-head in tonight’s tag team main event! Don Callis and The Good Brothers are seen watching the match from their locker room. Callihan, Moose and Bey wear Trey down as they cut off the ring and prevent him from making the tag. Both Trey and Callihan connect with clotheslines, giving Trey a moment to regain himself. Trey makes the tag to Cardona, who quickens the pace and goes on the attack! Trey launches himself over the top but is caught in mid-air by Moose. Trey reverses into a Hurricanrana, sending him into the steel ring post! Following a breathtaking flurry of offense, Callihan takes out Sabin with his signature Piledriver to win.

Post-match, we go to the back where it appears as though Sami Callihan has garnered the attention of Don Callis.