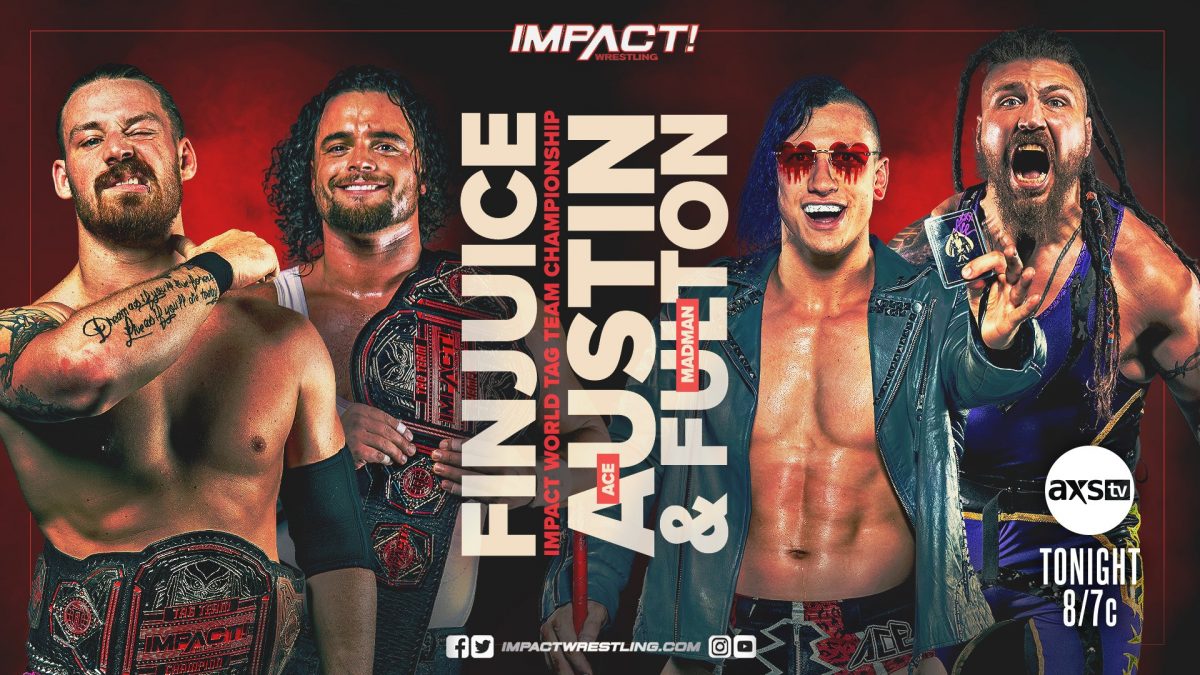 May 20, 2021
Nashville, TN
Results by ImpactWrestling.com

Tonight’s IMPACT is dedicated to the memory of Jerome “New Jack” Young. RIP.

Rohit Raju vs. Jake Something

Jake Something seeks revenge on Rohit Raju after the “Desi Hitman” cost Jake a spot in the 6-way #1 Contenders match at Under Siege. Jake hits a stiff forearm shot right at the opening bell. While the referee’s back is turned, Shera clotheslines Jake on the floor! Jake charges into the corner but Rohit sidesteps, sending him shoulder-first into the steel ring post. Rohit hits a Buzzsaw kick for two. Rohit attempts to chop down the big man but Jake fights back with a spear into the turnbuckles! Rohit counters a powerbomb attempt into a Flatliner for two. Shera trips up Jake from ringside, then holds him down as Rohit scores the pinfall to win!

After the match, Jake takes out his frustration on Shera with a steel chair. As Rohit watches on from the ramp, Jake spears Shera through a table!

Tenille Dashwood and Kaleb with a K interrupt Taylor Wilde’s interview with Gia Miller. After Taylor calls out Knockouts Champion Deonna Purrazzo, Tenille suggests that they should challenge for the Knockouts Tag Team Championships instead. Taylor once again reiterates that she has no interest in forming a tag team and her only goal is to become singles Knockouts Champion once again.

Jordynne Grace and Rachael Ellering are visibly frustrated after losing the Knockouts Tag Team Championships to Fire ‘N Flava at Under Siege. Jordynne heads to Scott D’Amore’s office to request a match for later tonight.

.@JordynneGrace and @RachaelEllering are disappointed after losing the Knockouts Tag Team Titles but Jordynne has a plan to get things back on track. #IMPACTonAXSTV pic.twitter.com/c9A8Z1q2tX

Tenille Dashwood is looking to earn a Knockouts Tag Team Title opportunity for her and Taylor Wilde. A win over one half of the reigning champs would certainly move her one step closer towards achieving that goal. Tenille hits a double underhook suplex for two. Tenille connects with a neckbreaker, snapping Kiera’s neck on the ropes. Kiera begins to build momentum with a superkick but Tenille shuts her down with a running clothesline. Tenille rolls up Kiera for three!

Post-match, Tasha Steelz attacks Tenille from behind. Kaleb With a K evens the odds until Knockouts Champion Deonna Purrazzo, Kimber Lee and Susan make their presence felt. After Kaleb is taken out of the action with a DDT, Tenille is on the receiving end of 5-on-1 beatdown. Taylor Wilde, Havok and Rosemary come out to make the save, sending their opponents scurrying out of the IMPACT Zone!

Jordynne Grace informs Rachael Ellering that after speaking with Scott D’Amore, they have a match scheduled for later tonight – against each other!

FinJuice tell Gia Miller that after they defeat Ace Austin and Madman Fulton tonight, they’re headed back to NJPW with the IMPACT World Tag Team Titles!

.@THEdavidfinlay and Juice Robinson plan to bring the IMPACT World Tag Team Championships to @njpwglobal after they win tonight to beat teams like Dangerous Tekkers, YOSHI-HASHI and Goto, and Tama Tonga and Tanga Loa to prove they are THE BEST. #IMPACTonAXSTV pic.twitter.com/xrV3GDuKpu

The experience factor comes into play early as Petey takes control with a running dropkick. Petey slingshots himself over the top rope and hits a Hurricanrana on the floor! VsK hits a tornado DDT, followed by a powerslam splash combo. VsK counters the Canadian Destroyer into a backbreaker for two. Petey successfully hits the Canadian Destroyer to score the victory!

Gia Miller interviews former IMPACT World Champion Rich Swann who made his return at Under Siege. Rich came to the aid of his friend, Willie Mack after he was on the receiving end of a sickening beatdown from W. Morrissey. Out of nowhere, Rich is blindsided by Morrissey.

Inside Swinger’s Palace, TJP wins back Fallah Bahh’s freedom so they can team up again. After their losing effort at Under Siege, Petey Williams claims that he has better chemistry with X-Division Champion Josh Alexander anyway. Petey heads to Scott D’Amore’s office to get a match made – him and Alexander vs TJP and Fallah!

Moments later, Decay appear at the Palace but Hernandez bounces them out. Rosemary makes it clear that they haven’t seen the last of Decay!

Moose is in the ring to address his victory in the 6-Way #1 Contenders match at Under Siege. Moose gives Kenny Omega credit for defeating the best talent from all over the world – but Omega has never defeated him. Moose calls himself the most athletic competitor in Professional Wrestling and that even a god such as Kenny Omega won’t be able to knock him off of Mount Olympus at Against All Odds. IMPACT World Champion Kenny Omega and Don Callis interrupt. Callis praises Moose for being an incredible physical specimen but says that he will come up short at Against All Odds, just like he always has in his Pro Wrestling and NFL careers. Moose threatens both Callis and Omega when The Good Brothers hit the ring. It looks as though Moose is going to fall victim to the numbers game when Sami Callihan appears! Omega, Callis and The Good Brothers retreat up the ramp as Moose and Callihan hold the ring.

Moose stops Sami Callihan in the back and tells him that he didn’t need his help earlier. Callihan says he didn’t come out there to help Moose – he came out there because he’s sick of Kenny Omega running roughshod over IMPACT Wrestling. Callihan says that no matter who walks out of Against All Odds with the IMPACT World Title, he’s coming to reclaim what’s rightfully his.

.@TheMooseNation and @TheSamiCallihan have made it extremely clear that they’re not on the same page. #IMPACTonAXSTV pic.twitter.com/BorTTV5owc

Former Knockouts Tag Team Champions Jordynne Grace and Rachael Ellering do battle in friendly competition tonight. It’s evenly matched in the early going as they trade holds and jockey for position. The aggression begins to build as Jordynne trips up Rachael from the outside. Jordynne locks in a Full Nelson but Rachael repeatedly backs her into the corner to break the hold. Rachael begins to build momentum with a jumping European uppercut, followed by a senton for two. Rachael avoids the Vader Bomb, then rolls up Jordynne for another near fall. Both Knockouts exchange pin attempts with Rachael eventually gaining the upperhand and scoring the three count!

After the match, Rachael and Jordynne shake hands and hug in the middle of the ring.

Brian Myers refuses to put his rivalry with Matt Cardona to rest as he attacks him in the backstage area!

Tune in to an all-new IMPACT! next Thursday at 8/7c on AXS TV as X-Division Champion Josh Alexander and Petey Williams battle TJP and Fallah Bahh, plus so much more.

Fulton puts his power advantage on display as he shoves Juice to the mat with a vicious shoulder tackle. FinJuice turn the tide with a double running bulldog to Fulton. FinJuice hold the ring as Ace and Fulton regain themselves on the outside. Moments later, Ace goads Juice into a massive clothesline from Fulton. Ace kicks Finlay off the apron, preventing Juice from the making the tag. Juice uses his quickness to avoid the oncoming assault, then dives into his corner to make the tag. The pace quickens as Finlay hits a slingshot crossbody to Fulton. Finlay hits Ace with a backbreaker for two. Ace and Fulton almost capture the Tag Team Championships after a Chokeslam Fold double team maneuver. Finlay stuns Fulton, causing him to collide with Ace in the corner. Finlay hits another stunner on Fulton, followed by an Unprettier from Juice to retain the titles!

After the match, Violent By Design make their way to the ring. In a shocking turn of events, Rhino “Calls His Shot” and trades in the Call Your Shot trophy for a Tag Team Title opportunity! FinJuice must now defend the IMPACT World Tag Team Championships for the second time tonight!

Doering erases both members of FinJuice with a massive running crossbody. Rhino takes out Finlay with the Gore. Doering hits Juice with a vicious clothesline to score the pinfall. Violent By Design are the new IMPACT World Tag Team Champions!

On Saturday, July 17th, our world changes again at Slammiversary!

We are on the road to #Slammiversary on July 17th where our world changes again. pic.twitter.com/CHOEVS0pVc