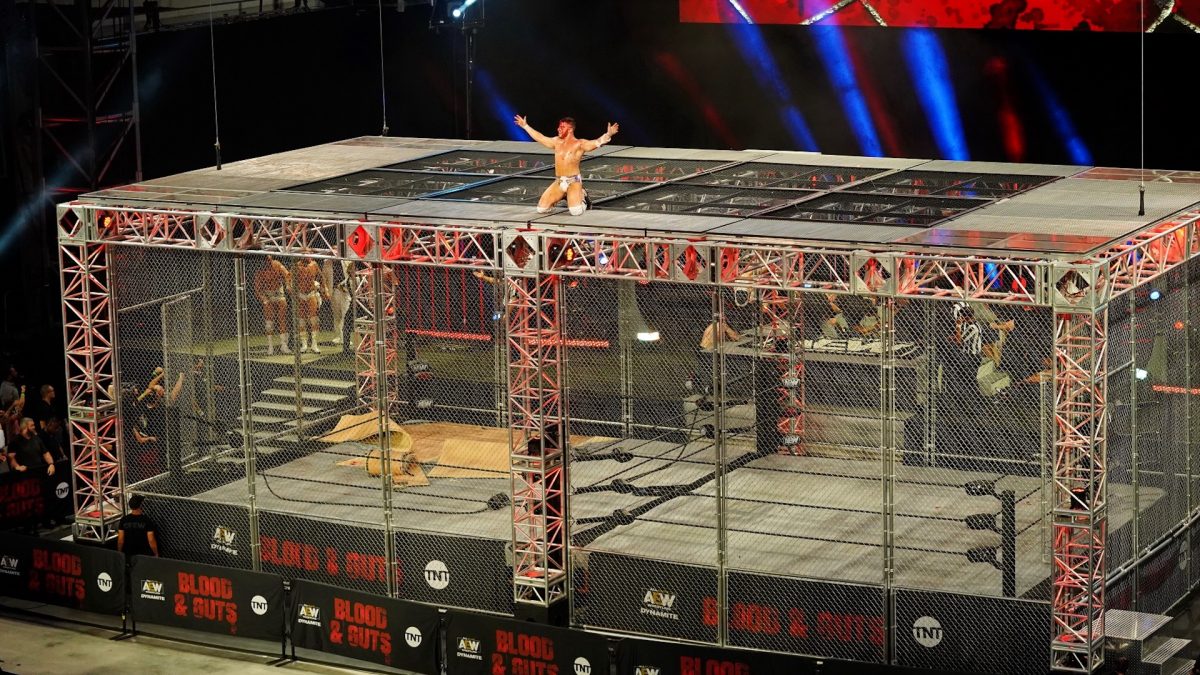 During a recent episode of the Talk Is Jericho podcast, Chris Jericho revealed that the timing of AEW’s Blood & Guts match was thrown off due to the match’s multiple commercial breaks and other issues. Jericho also stated that the climb to the top of the cage moment for the match also had to be delayed due to commercial break reasons.

“The time of the match got kerfuffled for various reasons and things didn’t exactly fall where we wanted to. Commercial breaks happened at a bad time and we were trying our best to get things on track. A lot of times during the match, I was talking to Aubrey Edwards about where we were in the time. When Max came in, I knew he didn’t have a lot to do and I said, ‘Let’s go to me quicker because we have more to do when I’m in and we don’t want to get cut by commercial.

When I came in, the idea I came up with, when Max starts seeing the countdown, he could take his guys and retreat to their side and I’ll take my guys, stand them up, and do like Westside Story. I got the idea from the Nexus in Sacramento when we did the seven-on-seven for SummerSlam. We just did the face-off and it was a complete crazy rumble. I said, ‘nobody move until I give the cue.’ After all the violence and crazy stuff, I knew that if we came in and just stopped and reset and let everyone cheer, it was going to be huge.”

As noted before, AEW recently announced that they will be resuming touring with fans in attendance starting this July.

Meltzer also reported in this week’s Wrestling Observer Newsletter that the reason why AEW scheduled a Friday date for their upcoming show in St. Louis, Missouri is due to the company’s current plans to do television tapings on Fridays on the weeks with AEW pay-per-view events.

Fightful’ Sean Ross Sapp reported that Impact Wrestling is currently interested in signing indie wrestler Killer Kelly to an official contract with the company. Sapp reported that at the moment, there are several issues causing those plans to be delayed before a potential signing can be possible. Kelly last worked for Impact at their television tapings held this past November.

During a recent episode of the Wilde On podcast, host Taylor Wilde revealed that she was originally planned to make her official return to Impact Wrestling this past January. Wilde stated that a work visa issue was the reason why her return was postponed to this past April instead.

“It’s been a major bummer because Toronto went back to a phase one, 28-day, stay-at-home order so I have not been wrestling for over a month and there’s been two different issues with my work visa which has been very frustrating as I was supposed to return to TV in January and it is now February and I really don’t know what’s going on at this point. But, I haven’t been sulking. I have been using this time to be productive. I’ve really been making connections at WWE and I’ve had the opportunity to interview all the up-and-coming NXT women which has been absolutely incredible. It’s also given me the time to really reflect on what it is that I want out of professional wrestling and what it is I want to give. So, I’ve been doing a lot of brainstorming about what company would aid me best in all my dreams and aspirations so, this downtime hasn’t been a bad thing. It’s been frustrating because I’ve been ready to go for a year. But after ten years of retirement, I couldn’t have chose a worse time to want to come back to professional wrestling other than a global pandemic.”