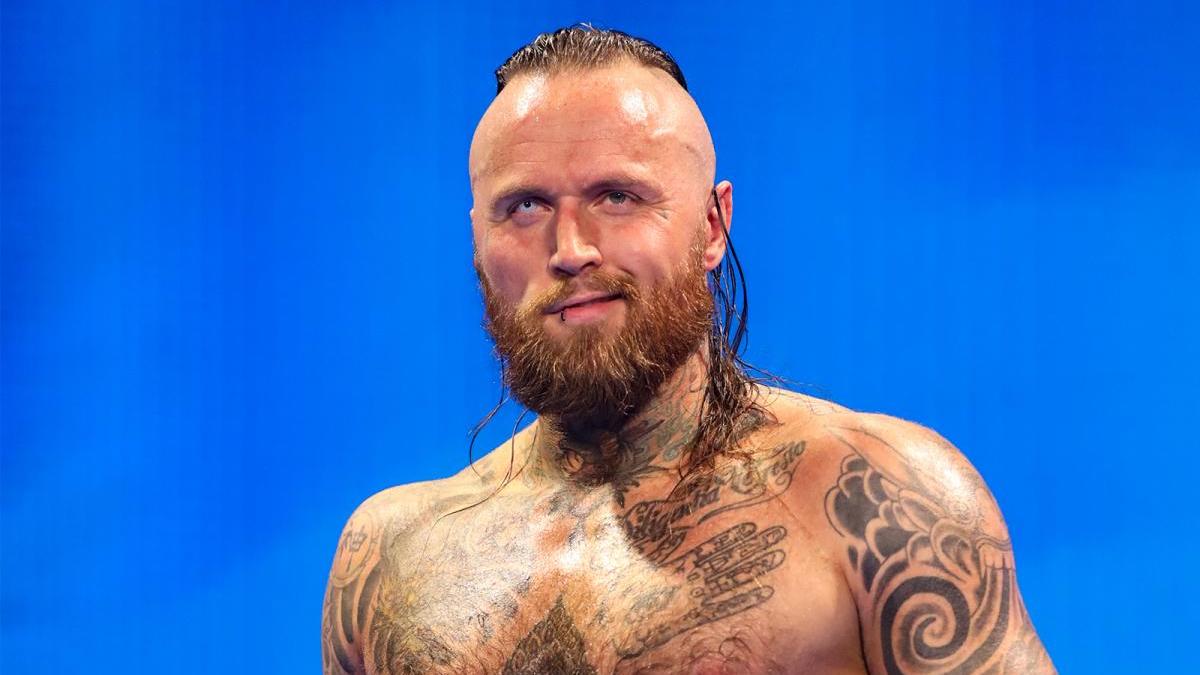 A recent episode of the Oral Sessions with Renee Paquette podcast had Aleister Black as the guest. Some of the topics discussed included Black revealing several unused creative ideas for him in WWE, his call-up to the main roster being delayed because of Triple H, his thoughts on Paul Heyman, and his wife’s release from WWE.

On the topic of unused creative ideas for him in WWE, Black stated:

“One of the cool pitches for me was that for a moment when I had the match with AJ [Styles], one of the things that leading up to WrestleMania was that during the end of my match with AJ [at Elimination Chamber 2020], you know, Undertaker appeared and helped me, saved me, stopped the beat down that The Good Brothers gave me. One of the pitches was that at WrestleMania, it was gonna be the other way around so it was AJ and Taker and one of the pitches was towards the end of that match, The Good Brothers would come out or something to that extent and I would be the one to help Taker and I always thought — the fact that they even considered that was like wow, you know what I mean? It was very cool. One of the other things that was always very cool is that [Paul] Heyman’s idea was to have either Samoa Joe or Brock Lesnar come into ‘the room’ at the time. Yes, [when I was doing the promos in the back]. So the thing was supposed to progress, obviously they never progressed. They always stayed the same which is one of my biggest regrets because I always wanted them to be much more than they were. I wanted them to have different verbiage, kind of like expand on it. I did what I could with them which is very minimal and Heyman fought tooth and nail for it but, at the end of the day, there’s obviously — if there’s a ‘no’, there’s a no. You can’t argue the ‘no’ all the time and one of the things we set course out to do was eventually having an interaction between me and either Brock Lesnar or Samoa Joe that would send [them] where I would cut this promo [in the] room and Lesnar would just come through from the darkness and would just choke me out and stuff like that and it would set up something similar to that. But again, the people have to understand, these are pitches. This is not a set in stone thing, this is the course of planning. These were all ideas that people were having in courses that were plotting and planning. They pan out, they might not pan out.”

On the topic of his call-up to the main roster being delayed, Black stated:

“So, I think we have to kind of go back to the start of my NXT career. I remember the match that I had with Velveteen [Dream] and that was a match that put me on the map and I remember Hunter telling me a while ago, about like a year-and-a-half ago, we had a talk. Even a year-and-a-half ago, I was going like, ‘What are we doing? Because it’s starting, stopping.’ Every time I thought we were going somewhere, we didn’t. Every time I saw the fans get behind me or the ratings were positive, no one pulled the trigger on it and Hunter told me that even back then, Vince [McMahon] was like, ‘I want that guy’ and then it was, I think the match with Johnny [Gargano] when I came back, again, ‘I want that guy’ and Hunter kept telling him, ‘No. I have this program with him. I want him to finish [and] write that out.’”

On the topic of working with Paul Heyman, Black stated:

“He [Paul Heyman] reached out to me on the day that it happened. It was very sad. Paul has always said to me, ‘Tom, I think you’re five years ahead of the business.’ He’s like, ‘As brilliant as I think you are, I think that’s also sometimes your biggest issue is that you’re so far ahead mentally that people have to catch up to it’ and he still now, he still believes. He’s like, ‘I still believe you’re gonna do great things’ and you know, we’re far from done. I am absolutely far from done.”

On the topic of his wife Zelina Vega’s release from WWE, Black stated:

“Two weeks before I came back and hit Big E, I sat down with Vince and he was like, ‘Are you ready?’ One week later, I’m sitting in the gym and I see a name on the phone calling me. It was a distinct voice and this person also didn’t understand why I was let go. It was a sense of relief. They let my wife go, under reasons that are questionable. Everything got sorted out and is fine, but they called me and said, ‘We understand this is putting you in a tough spot.’ Nope, this is my career, I spoke about it with her and this is business between you and her. Does Tom, her husband have an opinion on it? Sure. Does Aleister Black the professional? Nope. He’s ready to go to work and create. She agreed.”