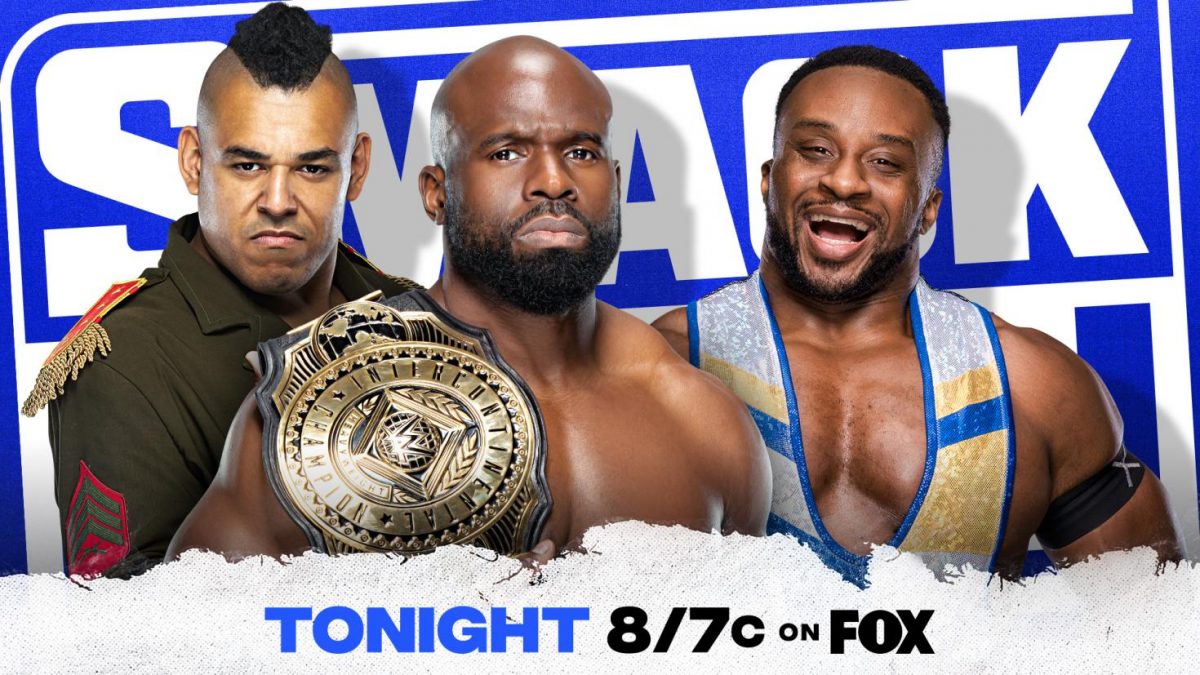 WWE SmackDown kicks off with highlights of last week’s Hell in a Cell match.

Live in the arena, Roman Reigns is backstage with Paul Heyman. He tells Roman that while the Mysterios are in their hospital beds, they are acknowledging their tribal chief. In comes Jimmy Uso as Roman stands up. He asks him where Jey is and Jimmy tells him he is a no show tonight. He says he finally got a hold of his brother and Jey told him that he ain’t coming back.

Roman says he takes him from being one of the Uso’s all the way to being main event Uso, the right hand man. And he doesn’t show up for work. Jimmy says he understands why Jey isn’t here and he’s nobody’s bitch but he is here tonight and he got him. Family for family. Roman says that Jimmy will be his right hand man and Jimmy says he’s not saying that but he can do what his brother does. Roman tells him to prove it.

Out comes Bianca Belair to the ring. She says what a night. It’s Friday, we are on the road to Money in the Bank and three weeks out from being in front of a live crowd. And tonight she is about to beat on Bayley again. But after she won at Hell in a Cell, she has not been able to stop celebrating. She says Bayley threw everything at her, ladder, chairs and kendo sticks. She says despite all the pain, she can’t stop smiling because she walked out with the Women’s Championship.

Bianca says she did not allow a Bayley, she means a bully, to get to her. And to anyone out there that is struggling or dealing with their own Bayley, to let this be a reminder that they are much more powerful because those bullies they can laugh but ding dong, the witch is dead.

Seth’s music hits and he says it’s a night celebrating with the Women’s Champion. And they are celebrating because at Hell in a Cell, they both overcame adversity. Bianca a little but he overcame a huge amount of adversity. The haters, the doubters and the trolls when he pinned that clown Cesaro. Seth says he beat him from bell to bell and he is moving on up but they have to celebrate.

Rollins says Bianca didn’t dominate the way he did at Hell in a Cell, she squeaked by Bayley and some what could it a fluke. But that’s no reason not to celebrate. Seth goes for the high five but Bianca refuses. She asks him who he thinks he is talking to. Bianca tells him he is teaming with Bayley and Seth says he knows that but he knows Bayley will come out and beat her up and they won’t be able to do that after.

Out comes Bayley and she tells him not to waste his time with Bianca. She says she was going to come out and congratulate her for her win from Sunday but all she heard was Bianca bragging and that’s not the kind of champion these people need and deserve. Bianca asks her to get in the ring. Bayley gets in the face and tells her that after he fluke victory, she still sees the same old, pathetic Bianca BelLoser.

Seth is in the corner laughing as Bianca knocks her down and Seth breaks it up. Bayley gets up and attacks Bianca.

The bell rings and we are under way. Cesaro with a take down on Seth in the middle of the ring. Cesaro with a back breaker. Bianca is tagged in. She clothesline Bayley and a shoulder block. Seth is tagged back in. Seth drops to the outside as Cesaro chases him. Cesaro on the ring apron, Seth goes for a knee but Cesaro moves out of the way and knocks Seth down.

Cesaro in the ring as he runs towards Seth but Seth slams him into the turnbuckle. Sling blade by Seth. He goes for the cover but Cesaro kicks out. Seth with a chop to the chest but Cesaro fights back. Seth with a snap mare take down followed by a kick to the back of the neck. Cesaro sent to the rope and a knee to the midsection. Seth goes for a suplex but Cesaro blocks it. Cesaro lifts Seth up but Seth on his feet. Bianca is tagged in as Cesaro throws Seth to the outside.

Bianca with a dropkick onto Bayley. She sends Bayley to the ropes and hits her with a back breaker. A standing moonsault. She goes for the cover but Bayley kicks out. Bayley rolls to the outside. Bianca runs towards Bayley but Bayley throws her onto the barricades. Bayley pushes Bianca into the ring steps.

Back from commercial, Bayley pushing Bianca around as she attacks Bianca’s arm. Bayley goes for the cover but Bianca kicks out. Bayley attacks Bianca’s arm but Bianca with a back drop. Cesaro is tagged in as he knocks Seth to the outside. Cesaro with an uppercut as he slams Seth into the ring apron. Cesaro throws Seth into the ring. Cesaro with a cross body off the top rope. He goes for the cover but Seth kicks out. Cesaro swings Seth around and goes for the sharpshooter but Bayley distracts him. Seth rolls Cesaro up but Cesaro kicks out.

Jimmy is backstage and out comes Heyman. Jimmy asks him about having to prove what. Heyman says his family needs the head of the table and they have one in Roman. And they need Roman to have a right hand man and if his brother doesn’t want to show up and be that, main event Jimmy Uso is what his family needs. Jimmy says they are 35 minutes in the show, he asks what he wants from him.

Heyman says Roman understands winning. He tells Jimmy to win a match. Jimmy agrees as Heyman says he will go make that happen. Heyman says if they get him the match and he doesn’t win, Heyman claps him on the shoulder and leaves.

Rick Boogs is in the ring and he introduces Nakamura to the ring. Nakamura, dressed in white, gets in the ring and sits on a throne. Ric places the crown on Shinsuke’s head. Pat stands on the announce table and smashes two water bottles together.

Kayla is backstage with Corbin as she asks him about last week. Corbin says she doesn’t know the half of it. He lost his crown, his investments. Corbin looks sad and says what’s the point as he walks away. 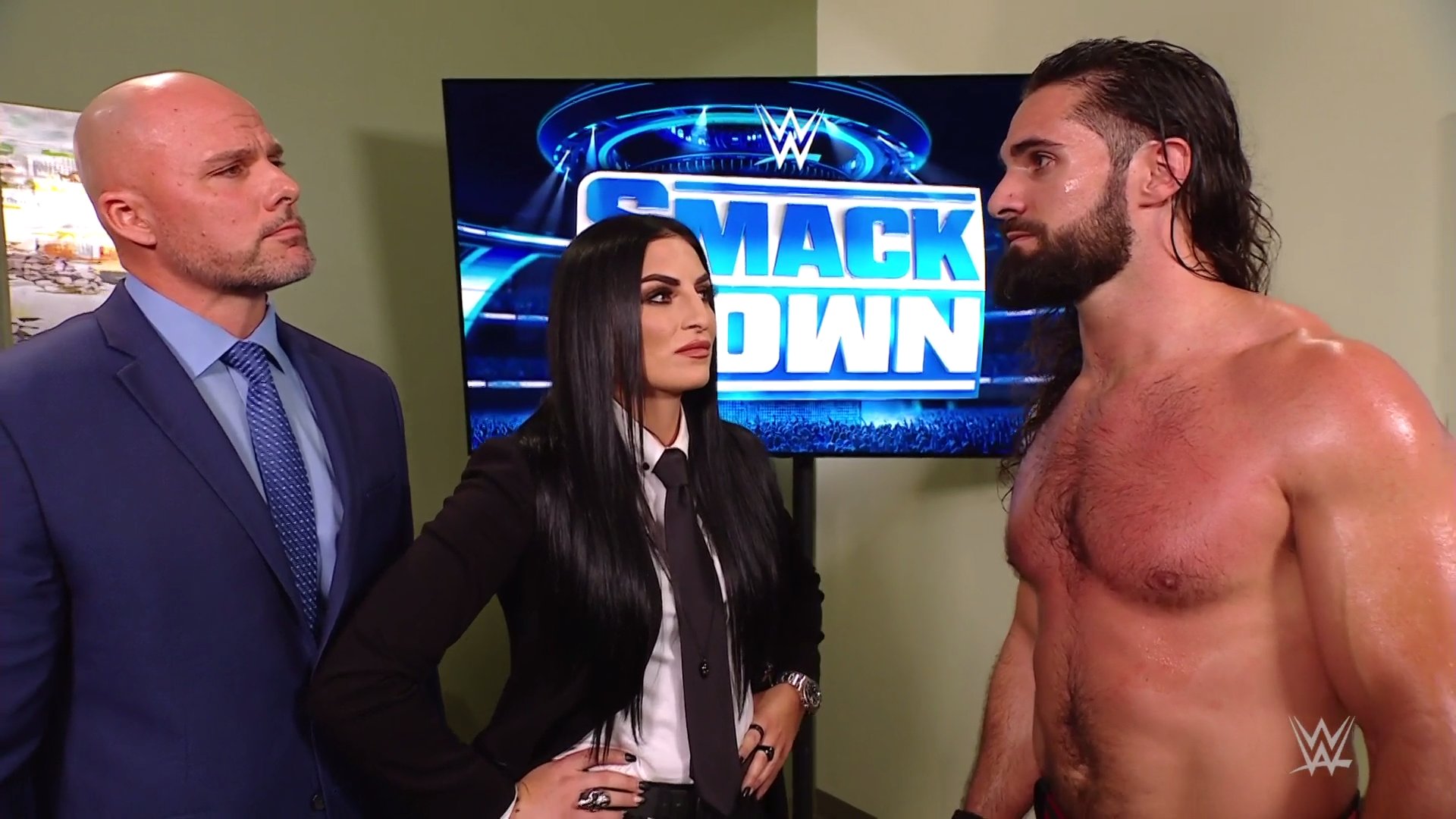 Sonya and Adam are backstage and in comes Seth. He says the time has come. The time is now. He says it’s what he can do for them and the entire WWE Universe. He says tonight Roman has a state of the Universal Championship address. And if the subject is his next challenger, they are looking at him. He says he doesn’t need to sit here and list his accolades. They know how accomplished he is but he has never been more prepared in his life, physically, mentally or emotionally for that challenge. And no one on this roster deserves that opportunity more than him.

Adam says he is inclined to agree but they are not ready to make that decision. Sonya says but they will take it under advisement. Seth laughs and says the time is now.

The bell rings and we are under way. Big E shoves Crews to the outside. Crews back in the ring and a kick followed by a right hand. Apollo runs to the ropes but Big E with a back elbow. He goes for the cover but Apollo kicks out. A clothesline by Big E knocks Apollo down. Apollo rolls onto the ring apron as both men fight. Apollo with the death valley driver.

.@SamiZayn will face @FightOwensFight NEXT WEEK on #SmackDown in a #MITB Qualifying Match.

Kayla is backstage and in comes Sami Zayn. He says the persecution he has suffered has made him see the world as a place of chaos. But after beating Kevin Owens, he realized that there is order to all of this. The universe is a machine and he is the messenger. He thinks this might be the best week of his life. Kayla says he’s facing Owens next week in a Money in the Bank qualifying match. Zayn says he beat Owens and put an end to him. And now he has to face him again. He says Kayla is not messing with him but with karma. He gets angry and storms off.

After commercials, Adam Pearce is backstage and in comes Sami. He asks why he has to beat Kevin again to qualify for Money in the Bank. Adam says he has to qualify against Kevin next week and it’s going to be a last man standing match. Sami tells him he is playing a very dangerous game with karma, with the universe.

Liv says declaring yourself as the most beautiful woman in all of WWE automatically gets you an opportunity. Liv gets in the ring and says she beat Carmella last week, she knows she belongs in the Money in the Bank match way more than Carmella. Both are face to face as Carmella says the match is for real stars and to look at Carmella and to look at her. Liv slaps Carmella as Sonya breaks it up.

Sonya says that is a way to make a statement but if Liv thinks she deserves it, to prove it. Liv against Carmella but even if Carmella loses, she is still in the Money in the Bank match.

Back from commercial and the match is already under way. Carmella slams Liv’s face into the ring apron and throws her in the ring. Carmella with a super kick. A back elbow by Carmella in the corner.

Natalya and Tamina are backstage watching the match.

Jimmy Uso is backstage and in comes Kayla who tells him the pressure is on. Jimmy says they don’t fold to it and he dedicates tonight’s victory to the family, to Jey and he hopes Roman Reigns is watching.

Jimmy throws Ziggler to the outside. Jimmy runs to the ropes and a suicide dive but he lands on Roode. Ziggler with the Zig Zag into the ring steps.

Roman and Heyman are watching backstage and in comes Jimmy smiling. Roman nods his head and walks down to the ring. Jimmy is about to walk with them as Heyman tells him he did great but to stay here.

Both men are in the ring for a “State of the Universal Championship Address” as Heyman says he has many flaws but being inarticulate is not one of them. As they are here to acknowledge the tribal chief, this footage speaks almost as eloquently as he does.

We see footage of Roman Reigns beating up on Dominik and Rey Mysterio.

Heyman says the Fiend got frightened, Strowman got slaughtered, Kevin got KO’d, Edge and Daniel Bryan got pinned, stacked, emasculated, neutered, embarrassed, humiliated at WrestleMania, shipped off. Bryan was man enough to come back and he got shipped right back out. Cesaro got clobbered and the Mysterio’s got launched, literally, figuratively, metaphorically, straight to hell. He says in less than a year, Roman has wiped out the entire division. And the tribal chief will have to change course in something that has never been done on network television before. Roman will enlighten everyone because they have no other choice, there’s no one left.

Jimmy goes to throw Edge into the ring steps but Edge reverses it throwing Jimmy into the steps. Edge spears Jimmy through the barricade. Roman and Heyman are on the ramp.