Buddy Murphy on Where He May Go Next, Aalyah Mysterio Storyline, Malakai Black and More 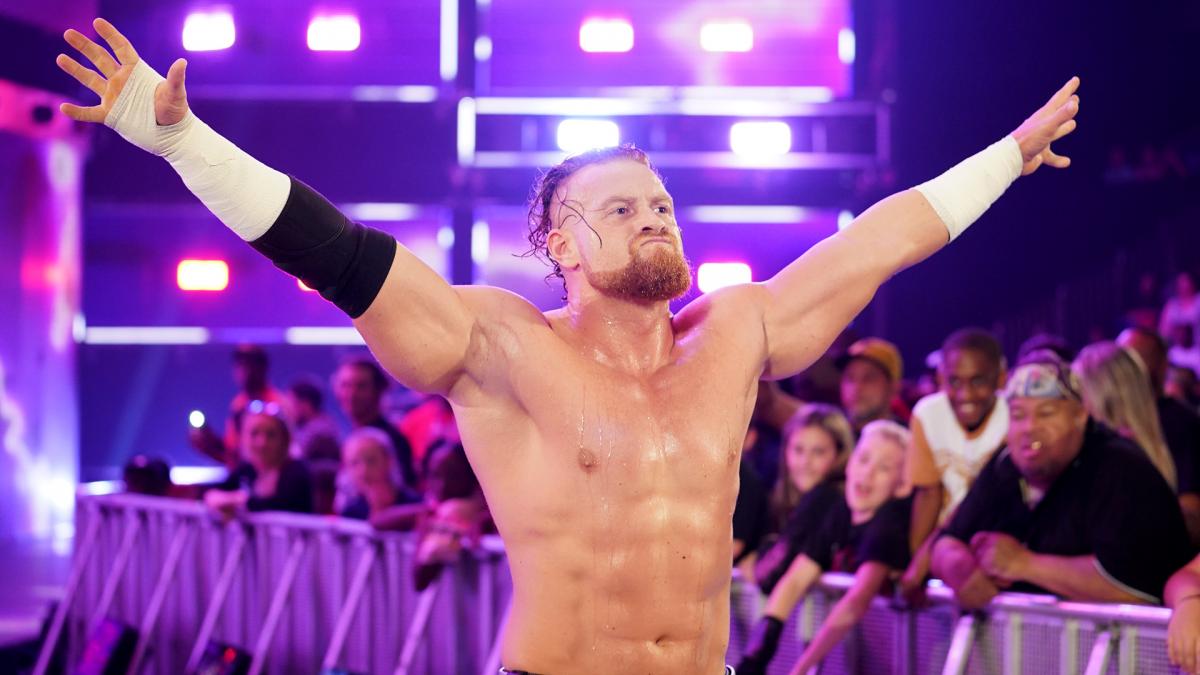 Below are a few highlights.

On his new, larger physique:

“It was a strategically taken picture. I look a lot bigger than what I actually weigh. I don’t hold much water, so if you take the water weight out, I’m maybe a little smaller. My last match in WWE, I think it was around WrestleMania Battle Royal, I was about 200lbs. But visually I look a lot bigger, it’s just a number on the scale to me. Right now I am about 213-215. But I definitely gained size, my strength is really good at the moment. I had a bad mentality when it came to food, especially towards the end of my run in WWE. I would diet like crazy Monday to Friday, in hopes that maybe Friday is the day. I always wanted to be ready. I didn’t want to be that guy where when his ticket is called, he is not ready. Also I have been training at a wrestling school for the last 6 months in case you need a 20 minute match that I can go. I’ve also spent more time in the gym so when I take my shirt off I look good. Every time is like a job interview, you just don’t know. But then you get to Friday, you don’t see your name on the sheet and you binge eat on the weekend. Then Monday comes and it starts again. So I’m eating more now, nothing has changed except for being ultra lean heading into a TV taping. I’m not binging and on a bad cycle.”

His thoughts on Malakai Black (Tommy End) in AEW:

“It’s awesome that he gets to go over there, he’s going to do his thing and do what he wants to do, right? I feel like WWE dropped the ball with him. I’ve been in the ring with him, I know first hand how good he is. I’m excited for him. He didn’t tell me, he kept it pretty low-low. And I was talking to him the day he debuted and he didn’t tell me. Only good things for him in the future.”

What his new name is going to be:

“I’m excited for the possibility. I think I could do some great stuff in IMPACT, I’ve got friends there like Sami Callihan. I’m pretty sure I wrestled like 9 dark matches on NXT with Sami Callihan in a row. Ring of Honor, some of my guys and my friends from back home are with Ring of Honor. That excites me, being with some people that I used to ride the streets with in Australia. It’s exciting but it’s an unknown. I have just under 2 months left, so we’ll see what comes.”

On moving from 205 Live to the main roster:

“My whole time in the cruiserweight, loved it. I can’t be more appreciative of my time in 205 Live. It was fun, I was creative, I was having great matches. We felt like we had a little bit of pull and we could suggest stuff and it would be considered. It was an awesome group of guys, we all travelled together. I win the title, do some great stuff, go to WrestleMania, lose it, pass it to Tony Nese. And then I get drafted to SmackDown. I’m like this is it! But then I don’t do anything for 4 to 5 months. The I just so happen to accidently be in the background of a Roman shot, which gave me a spotlight and had the internet talking. When the internet talks they [WWE] can shy away from it. But luckily in my case, they brought attention to it. Then I had this killer match with Roman and the week after I had this killer match with Bryan. Then I was in the King of the Ring against Ali. 3 weeks in a row I have killer matches, but then I’m just dropped. I didn’t understand it. I was in talks with [Paul] Heyman, and he was going to take over RAW. I assumed that he had spoken up and said he wanted me, and the people of SmackDown didn’t want to use me. They didn’t want to highlight someone who is going to Mondays. They say that if Paul wants to advocate for you, it can work for you or against you. Maybe it worked against me, but I felt like I was delivering. Did I lose out or did you?”

“That was my idea. But the whole story behind it was never told. So I was talking to Michael Hayes and he goes ‘Buddy!’ I’m like ‘Hey Michael what’s up?’ He goes ‘Buddy, it’s too friendly.’ So I’m like maybe I should go back to Murphy. In NXT it was Blake and Murphy, I don’t need Buddy. Maybe because I am this disciple character, and Buddy doesn’t fit. I said ‘Well how about I sacrifice my given name for the greater good?’ Now I am becoming a reborn to Seth. I’m giving away my birth name and I will be known like a number for the greater cause. Next week, I am just Murphy, never explained. The whole idea was I am doing this for Seth and when I leave Seth, I go back to Buddy Murphy. I didn’t like that. They could have explained it a lot. The fact that we are talking about it now, they are questioned that should not have to be answered a year and a half later.”

On the angle with kissing Aalyah Mysterio:

“I wasn’t comfortable kissing Aalyah. I did that because it was my job and it was going to create more drama in the story. Originally, there was no kiss scripted. They [the producers] went and they talked to Vince about something. They come back and they pitch it to me but they are kind of like weird. Then they say ‘…and then you kiss her.’ I start laughing and go ‘f*ck off.’ But then they are like ‘No we are serious.’ I look at the other producer and he was like [nods head]. I’m like ‘No way! How did you come back with this?’ My whole thing was I had to play it very carefully. I said to them ‘I’m not going to express feelings to her. I can’t pursue her, she has to pursue me.’ This was because of the age difference. You don’t make it any easier when you use my birthday as ‘the message.’ So now you have given them [fans] the information of how old is he? How old is she? What? I think them saying ‘Happy birthday’ basically just outed that. I wasn’t comfortable with it, but they didn’t help with the situation. I’m like ‘What does she [Aalyah] think about it’ They go ‘She’s cool with it.’ I’m like ‘What!’ They went to her first, I thought she was going to shoot it down. So then I go ‘What about Rey?’ they say ‘They’re OK with it?’ I’m like well if they are OK with it, I can’t be the one that goes whatever. I was very blunt with them, I can’t pursue her, if I do, I’m a creep. I’m a ‘pedo’ as people say on the internet. If she goes for me, she’s an empowered woman that knows what she wants. I think they sold her on a Hollywood style kiss. I’m not in Hollywood, what’s a Hollywood style kiss? They explain the camera shots. We are live on TV you can’t do these behind the head camera shots. There’s 8 cameras on you, who knows which one they are going to shoot you on. If there’s a gap, the whole thing is done. Seth was nervous about it, because this whole storyline rides on this one kiss. I’m uncomfortable, and she’s new. We are out there and about to cut the promo and I said to her this needs to look good. If you have any second minds, I am giving you the green light. Do whatever you want, it’s 100% you. Do what you need to do, this needs to look good. It looked great, the aftermath wasn’t great for me. But we are both adults, we are both acting, we gave each other a high 5 after it and that was it.”

How he feels about the non-compete clause and mass talent releases:

“The 90 days is to kill all buzz and all hype. It’s so you don’t have any momentum when you go somewhere else. I’m not going to blow my load in the first week. I have to expand it over the 3 months. That’s why I drop the progress photo. Then I will drop something else. I feel like they hoard a lot of talent, and now they are saturating the talent. It is a business move I believe they are making. If you send out 3 guys, they can do what they want. If you send out 40 guys, the work gets cut. But wrestling can boom again. Now the pandemic is ending, more talent can go to the indies, and the fans can see it all.”