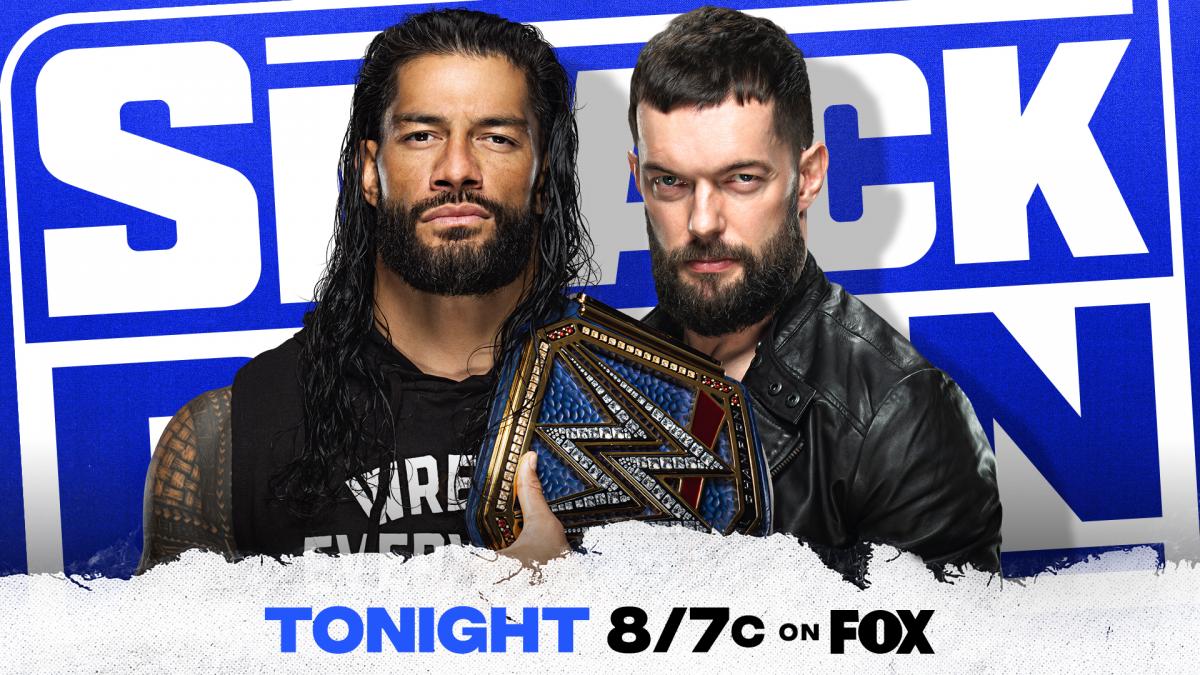 WWE SmackDown kicks off with John Cena making his way down to the ring. Cena replies to Roman’s comment last week about missionary saying if you can find someone doing missionary properly for two decades to keep them in your life.

Cena says tonight Roman and Balor will sign a contract for their match at SummerSlam. Cena says that’s half bad and respect to Balor but it proves his point that Roman sucks. And he sucks because beyond all that passive aggressive false confidence, Roman is a scared little kid. He says Roman accepts Finn’s challenge and he rejects his. Cena says Roman rejected him because he didn’t change his music, look or who he was in his heart. That is stupid, that is like asking Stone Cold Steve Austin to come back to the WWE as Sasquatch Steve Houston or if The Rock finally came back to the WWE as Dwayne Too Small Johnson.

Out comes Baron Corbin. He tells Cena they need to talk.

Cena says he has no idea who he is. Oh, that’s Baron Corbin. Cena says he looks horrible. Corbin says things aren’t going well for him. They have never been close but he is desperate and desperate men do desperate things. He says his life is falling apart. He lost his crown, cars, house, someone stole his identity and his credit bad.

Corbin tells him last week he got injured in a very sensitive part of his body and now he’s no longer able to perform. And because of that, his wife left him and took the kids. He’s back there and he sees the charitable John Cena, the man who grants so many wishes. And if someone can help him it’s him. Cena asks the crowd if he should help Corbin. It’s a split crowd. Cena grabs some money out of his pocket and gives him some money. Corbin says he can work for it and he can even be in Suicide Squad. Cena says they’re done filming for it. And he can be his stunt double in the sequel.

Cena says that’s a bit of a reach. Corbin says Cena is a selfish, self absorbed and he’s a Hollywood sell out. Cena says this is a teachable moment. Cena says he will give him something he needs, an Attitude Adjustment. Cena gives him the AA and leaves the ring.

Rey Mysterio is backstage with Dominik. Rey tells him he is proud of him as Dominik tells him he has his back.

The bell rings and we are under way. Jimmy with a shoulder block takes Rey down. Rey is sent to the ropes but a head scissor take down on Jimmy. Rey with right hands followed by a bulldog off the second rope. He goes for the cover but Jimmy kicks out. Both men back up and a right hand by Jimmy as he slams Rey into the turnbuckle. A head lock by Jimmy as he hits Rey with a right hand. Jimmy goes for a clothesline but Rey moves out of the way and Jimmy to the outside. Rey goes for slide to the outside, Jimmy moves out of the way and he hits Rey with a super kick.

Back from commercial, a kick to the side of the head by Jimmy knocks Rey onto the ring apron. Jimmy grabs Rey up the top rope as he goes for a suplex but Rey knocks him down. Rey with a senton off the top rope and a cross body. He goes for the cover but Jimmy kicks out. Rey goes for a splash in the corner but Jimmy moves out of the way. Jimmy lifts Rey up but Rey lands on his feet and trips Jimmy up onto the second rope. Rey goes for the 619 but Jey pulls Jimmy to the outside. Rey flies over the top rope onto the Usos. Rey throws Jimmy back into the ring.

Rey throws Jimmy back onto the second rope. He goes for the 619, Jey on the ring apron as Rey knocks him down. Rey goes for the 619 on Jimmy but Jimmy catches him, Rey rolls over him and goes for the cover as Dominik pushes his legs onto Rey for leverage and Rey gets the pin.

Kayla is in the ring with Bianca Belair. Kayla says she has surpassed 100 days as SmackDown Women’s Champion. Bianca tells her she’s going to make her blush. She says the past 100 days have been crazy. She says it keeps getting better and better but she is grateful.

Out comes Carmella. She sarcastically congratulates Bianca on her 100 days but if she wants to cement her legacy, she should give one more title match to someone who held that title for 130 days. That same person who is also known as the most beautiful woman in WWE. Carmella tells her she knows she deserves it.

Out comes Zelina Vega to the ring. She tells Carmella she better slow her role. They all know she is too pretty to be a third time loser. Zelina gets in the ring. She thinks that the WWE Universe wants to see Bianca challenge a rising star like herself. Because she is the moment and no one is more deserving than her. Zelina tells her to accept her challenge.

Sasha Banks’ music hits as she runs out to the ring. She knocks Carmella and Zelina down. She lifts Bianca up and hugs her.

Kayla is backstage with Reginald and he says whoever decides to challenge him should expect the unexpected. 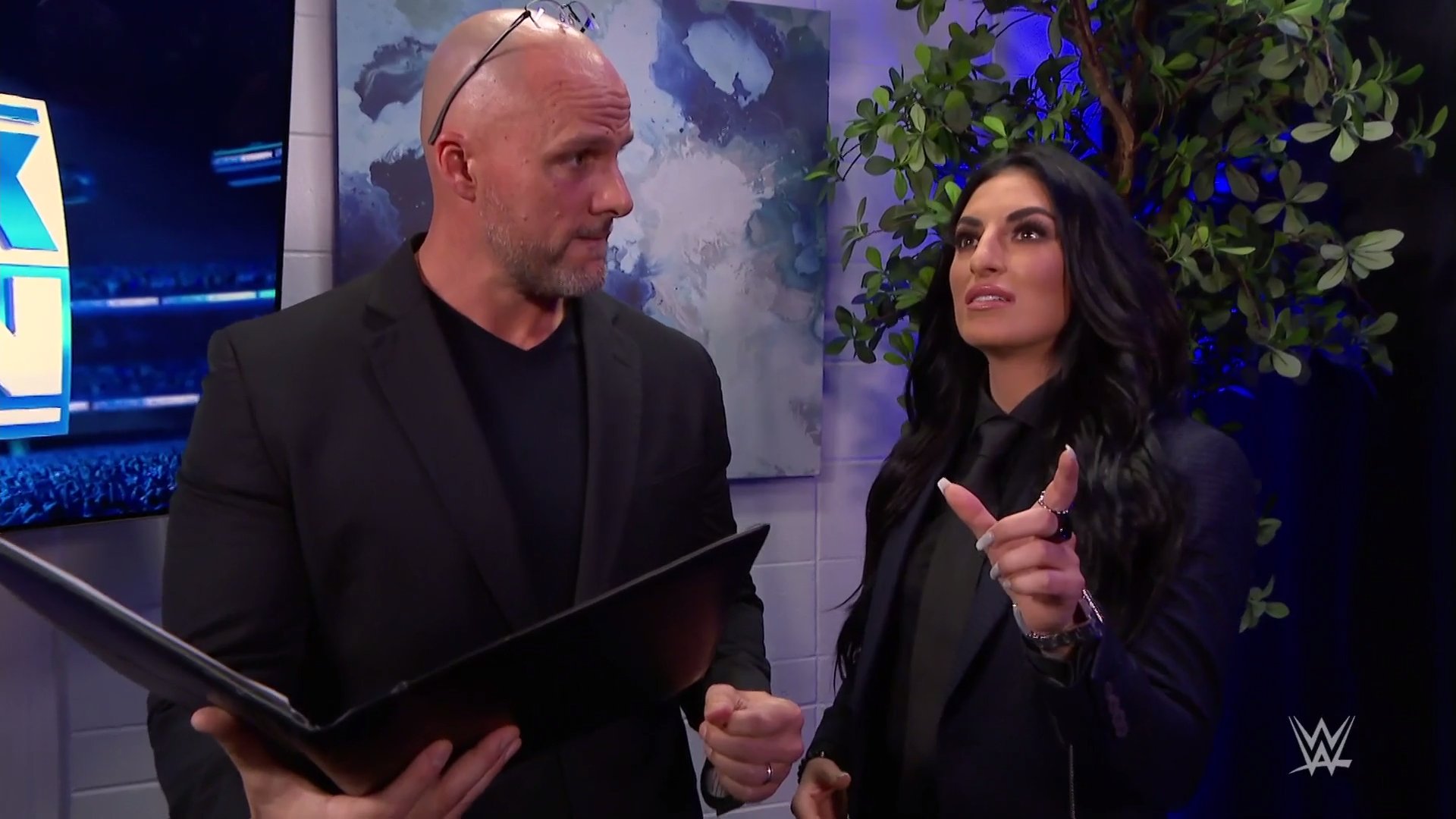 Adam Pearce and Sonya are backstage. Sonya says tonight’s main event will be Carmella and Zelina Vega vs. Bianca Belair and Sasha Banks.

Heyman grabs the chair and places it at the head of the table as Roman has a seat. Finn sits on the other chair as Pearce asks them to take a look at the contract and sign it. The fans chant Cena as Roman says we’ve already seen mister missionary tonight. He asks Finn if he saw Cena’s opening promo. Cena said that by Roman accepting Finn’s challenge, he is ducking Cena. That means Cena thinks Finn is a lesser man than him.

Roman says he doesn’t think that. He thinks Finn is worthy to challenge for the Universal Championship. And he is also worthy of catching the beat down at SummerSlam. But for the record, he doesn’t think Finn is like John. He doesn’t come out with a tired old shtick that’s not working anymore. He says Finn is hungry, he wants it and he digs that. Roman says if Finn signs the contract, he will smash him and send him back to NXT.

Heyman grabs a pen and hands it over to Roman as the fans chant Roman sucks. Roman signs the contract. Finn tells Roman that he thinks highly of himself and perhaps justifiably so. But it will be his privilege to return to NXT once again Universal Champion. 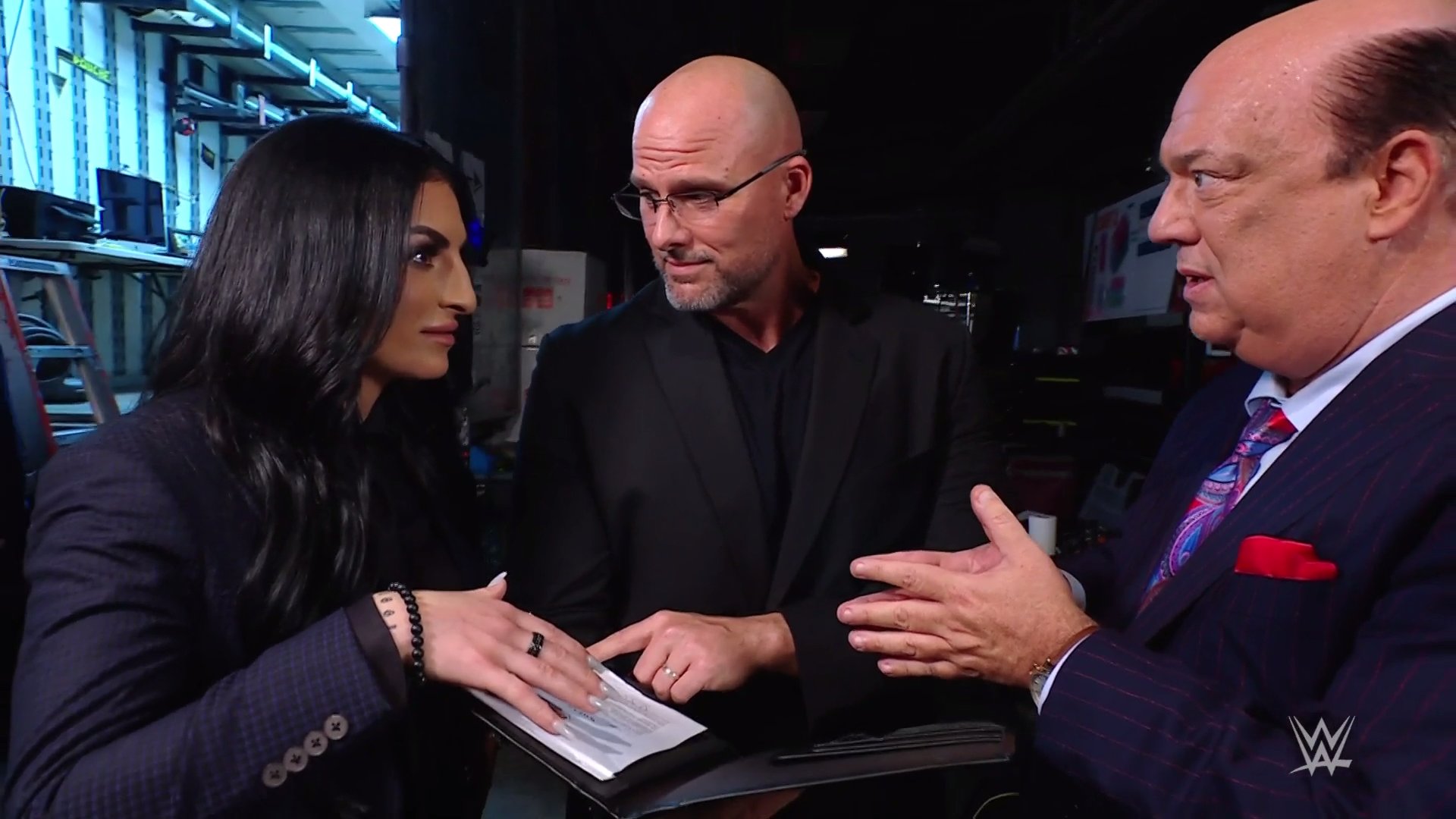 Heyman tells Pearce and Sonya that was great television. But what are they going to do about SummerSlam because it’s Finn Balor’s name on the contract and it’s Cena’s name. It’s not legal in binding. Pearce says he sees Roman and Cena’s signature and that is good enough for him. Sonya says that Roman Reigns is going to defend his WWE Universal Championship against John Cena at SummerSlam.

The bell rings and we are under way. Apollo throws Big E to the outside as he distracts the referee and Ziggler hits Big E with the Zig Zag.

Nakamura goes for the Kinshasa but Ziggler with the Zig Zag and both men are down. Apollo is tagged in and a standing moonsault. He goes for the cover but Ziggler kicks out. In comes Cesaro, he knocks Apollo down. Roode takes Cesaro down. Big E takes Roode down. Ziggler takes Big E down. Nakamura takes Ziggler down. Apollo knocks Nakamura down.

Apollo climbs the top rope as Boogs plays the guitar. Azeez grabs Boogs and knocks him down. Cesaro knocks Azeez down. Ziggler with the super kick on Cesaro. Nakamura with the Kinshasa on Apollo in the ring. He goes for the cover and gets the pin.

They show clips from “moments ago” of Seth Rollins viciously attacking Edge as Edge was coming down to the ring. Rollins beat on him for a while and hit him with one of the cameramen’s cameras.

Afterwards, Rollins is in the ring and he says he is sick of Edge. He tells Edge what goes around comes around and he is a revolutionary. He asks to show the footage. We see a clip from weeks ago where Seth was angry that Edge was selected over him for a Universal Championship match.

The bell rings and we are under way. Bianca gets Carmella in the corner as Sasha is tagged in. They double team Carmella. Sasha goes for the cover but Carmella kicks out. Sasha lifts Carmella up but Carmella lands on her feet and slams Sasha down. She goes for the cover but Sasha kicks out. Carmella with elbow as she knocks Sasha down. Zelina is tagged in and they go for a double suplex but Bianca breaks it up and a double drop kick by Sasha and Bianca as Carmella and Zelina fall to the outside. Bianca lifts Sasha up and throws her onto Zelina and and Carmella.

Back from commercial, Zelina tags Carmella into the ring as she stomps on Bianca in the corner. Carmella taunts Sasha as Bianca clotheslines her down. Zelina is tagged back in as she gets a head lock submission on Bianca in the middle of the ring. Bianca reverses it into a back breaker. Sasha is tagged in and she hits Zelina with the meteora. She knocks Carmella off the ring apron. Sasha with the three amigos suplex. Sasha climbs the top rope and lands the frog splash. She goes for the cover but Carmella breaks it up.

Carmella drags Zelina to the corner and tags herself in. Carmella with a face buster. She goes for the cover but Bianca breaks it up. In comes Zelina but Bianca throws her to the outside. Sasha with the backstabber and into the Bank Statement as Carmella taps out.

Bianca and Sasha celebrate after the match but Sasha hits Bianca with the Backstabber. Sasha hits her with a tornado DDT and gets her in the Bank Statement.