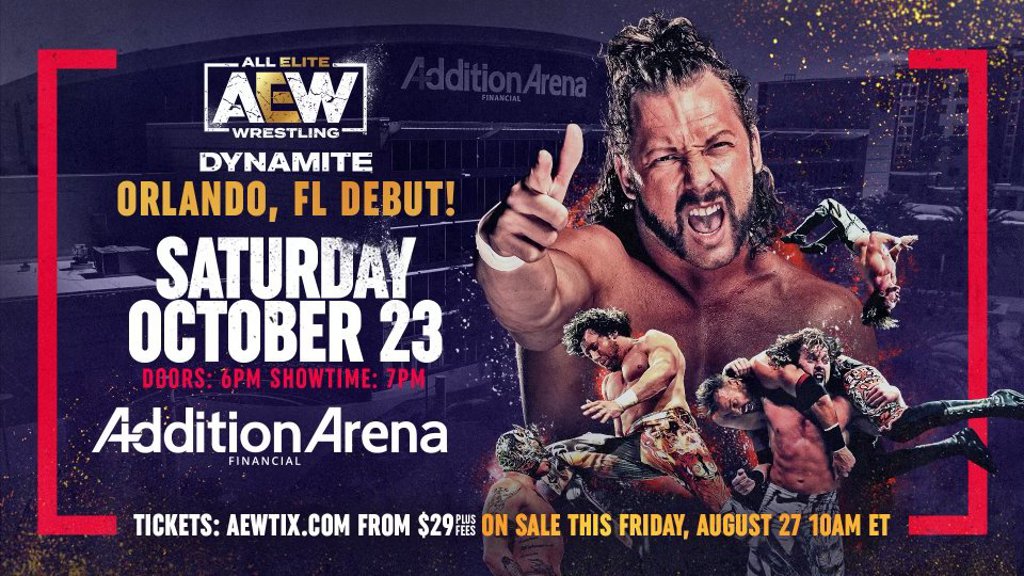 AEW recently announced that they will be airing an episode of AEW Dynamite on a special Saturday date in October.

This special Saturday episode was announced to be taking place on October 23rd at the Addition Financial Arena in Orlando, Florida. Tickets for this event was announced to go on sale starting on August 27th.

The Wrestling Observer’s Dave Meltzer reported that the official reason for the Saturday date is due to TNT will be airing an NHL game on October 20th on their network during Dynamite’s regular Wednesday timeslot that night.

A trademark for “WWE Day 1” was filed by WWE on August 19th for video games and merchandise-related purposes. This is the name of WWE’s upcoming New Year’s Day event on January 1, 2022 in Atlanta Georgia.

A trademark for “The Alpha Male Monty Brown” was filed by former wrestler Monty Brown on August 18th for merchandise-related purposes.

A trademark for “Blue Meanie” was filed by The Blue Meanie on August 16th for wrestling and entertainment-related purposes.

The Chicago Tribune reported that Cook County officials recently issued a new mask mandate for all indoor events in the county, which went into effect this past Monday. The official reason was due to the recent surge in COVID-19 cases in Illinois. This new mask mandate expands the mandate that was issued earlier covering only the city of Chicago and affects AEW’s upcoming Dynamite, Rampage, and All Out 2021 events.

Major League Wrestling announced that this year’s Opera Cup tournament will be taking place on October 2nd and November 6th in Philadelphia, Pennsylvania.

MLW also announced that their recently rescheduled MLW Fusion tapings in Dallas, Texas is currently scheduled to be held at the Gilley’s Dallas venue in the city.

New Japan Pro Wrestling talent KENTA announced on Instagram that he recently tested positive for COVID-19. KENTA stated “I got COVID last few weeks. First of all, I apologize to everyone who had to [change plans] because of me. Fortunately, my symptom was not too bad. Just [had a] fever a few days (102 F) and lost my smell. But now I’m totally fine. And got [a negative test]. Stay safe and healthy, everyone.”

West Coast Pro Wrestling recently announced a new match for the card of their No Leaf Clover event on October 8th in South San Francisco, California:

Game Changer Wrestling recently announced a new match for the card of their Get Lost Alot event on September 24th in Queens, New York:

Ring of Honor recently announced two new matches for the card of their Death Before Dishonor 2021 event in Philadelphia, Pennsylvania: