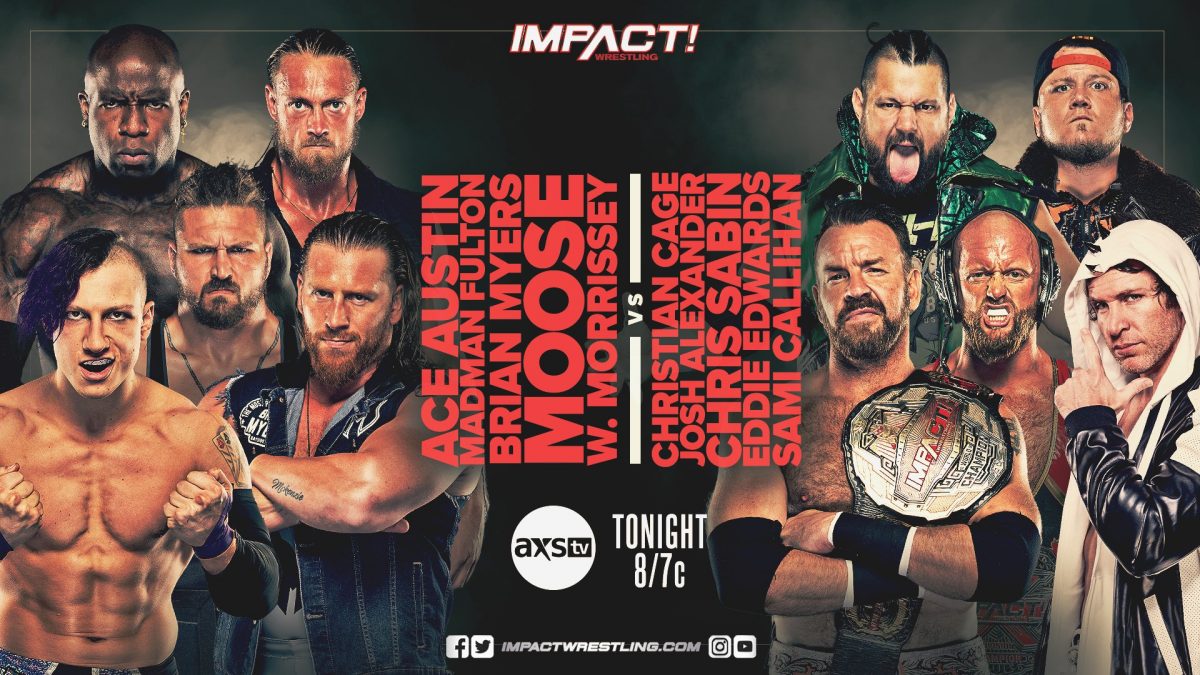 Violent By Design looks to get back on track as their rivalry with Decay continues here tonight! Rhino blindsides Taurus to jumpstart the match and gain the early advantage. Rhino pummels Steve from the apron, allowing Deaner to remain in control. Steve bites Deaner as the crowd goes wild! Steve heads to the top but once again, Rhino gets involved. Deaner inadvertently hits Rhino with the VBD flag as Steve capitalizes with the jumping DDT to win.

.@swinger_johnny is worried about the competition Swinger’s Palace might face when we head to Las Vegas. #IMPACTonAXSTV pic.twitter.com/W7Mk57FhDO

After TJP cost Petey Williams his match against Steve Maclin last week, he heads to Swinger’s Palace to collect his money. Petey confronts him and vows to exact his revenge when they meet one-on-one tonight!

The team led by IMPACT World Champion Christian Cage in tonight’s huge 10-man war prepares for battle during an interview with Gia Miller. Despite X-Division Champion Josh Alexander and Chris Sabin being on the same team tonight, they’re opponents with the X-Division Title on the line at Victory Road!

Petey sends TJP to the outside with a slingshot Codebreaker. Petey hits a side Russian legsweep to remain in control. TJP turns the tide with a running boot in the corner but Petey avoids the follow-up Mamba Splash. Petey locks in the Sharpshooter to do some serious damage! TJP counters the Canadian Destroyer but Petey is able to catch him in a pinning predicament to win!

Post-match, Steve Maclin sends a violent message and lays out both competitors!

After being taken out of action by The Good Brothers, Willie Mack returns and joins Rich Swann in attacking the IMPACT World Tag Team Champions with a pair of crutches! Willie reveals that he’s back at 100% just moments before being granted an IMPACT World Tag Team Title opportunity by Scott D’Amore.

After Laredo Kid made his triumphant return last week on BTI, John Skyler looks to even the score in a highly-anticipated rematch tonight. Skyler gets on the mic and says that tonight, Laredo Kid won’t be so lucky!

Laredo hits a jumping neckbreaker, then collides with Skyler with a big dive to the ramp! Skyler brings Laredo’s momentum to a halt with an overhead suplex on the floor. It’s a stalemate after both men take each other out with double clotheslines. Skyler pulls at the mask of Laredo, then rolls him up with a hold of the tights to steal the victory!

Taylor Wilde, Jordynne Grace and Rachael Ellering hijack a new edition of Tenille Dashwood’s talk show, All About Me! Wilde challenges Dashwood to a singles match at Victory Road, claiming that Dashwood won’t be able to defeat her without the help of The Influence!

After Rohit Raju hit Chelsea Green with the Tiger Knee, Matt Cardona sought his revenge and attacked him in the parking lot. Scott D’Amore announces that Cardona will face Rohit in a No DQ match this Saturday at Victory in order to settle this feud once and for all!

Tensions have finally EXPLODED between @MickieJames and @DeonnaPurrazzo! #IMPACTonAXSTV pic.twitter.com/O1KS8VgQcI

Trey Miguel has been a thorn in the side of Matthew Rehwoldt ever since he arrived in IMPACT Wrestling and they’re set to clash in a grudge match here tonight! Rehwoldt matches Trey’s speed with a running dropkick, then sends him toppling to the floor with a clothesline over the top. Rehwoldt remains in control when he drops Trey head-first on the apron. After several minutes of dominance from Rehwoldt, Trey begins to build momentum with a springboard dropkick. Rehwoldt catches Trey in mid-air, then hits a modified fireman’s carry powerbomb for two! Rehwoldt crashes and burns with the Swanton, allowing Trey to lock in a modified heel hook to win by submission!

After the match, Knockouts Champion Deonna Purrazzo attacks Trey Miguel but Mickie James makes the save! A huge brawl breaks out as Mickie soars through the air, colliding with everyone on the floor. These two Knockouts are on a collision course!

.@RealTSteelz says if Decay want the Knockouts Tag Team Titles back, they’ll have to come and get them at #VictoryRoad! #IMPACTonAXSTV @SavannahEvansNV pic.twitter.com/HD9LWVEdY9

Last week, Tasha Steelz and Savannah Evans stole the Knockouts Tag Team Titles that belong to Havok and Rosemary. Tasha says that if they want them back, they’re going to have to take them this Saturday at Victory Road!

The Bullet Club’s Chris Bey and Hikuleo claim that they’re going to put FinJuice down at Victory Road.

It’s an unprecedented main event as Christian Cage and Ace Austin lead their hand-picked teams into a colossal 10-man war just two nights before they clash for the IMPACT World Title at Victory Road! The match quickly breaks down as the fight spills to the outside. Callihan catches Ace with a mid-air forearm shot, followed by a Piledriver to Sam Beale who isn’t even in the match! The distraction allows Myers to blindside Callihan, giving his team the control. Callihan takes Fulton off the top with a bulldog. Alexander and Sabin play mind games before their X-Division Title bout at Victory Road, tagging themselves into the match. Eddie sends Moose flying with a belly-to-belly suplex. Eddie is perched on the top but Morrissey distracts him, allowing Moose to dropkick him all the way to the floor! Christian Cage flies with a top rope Frog Splash to Myers but the pin is broken up by Morrissey. Christian Cage finally gets his opportunity to square off with Ace Austin but Ace hits a low blow! Eddie hits a Superplex on Ace, sending him crashing into a sea of humanity on the outside! Christian Cage hits Myers with a Spear, followed by the C4 Spike from Alexander to win!