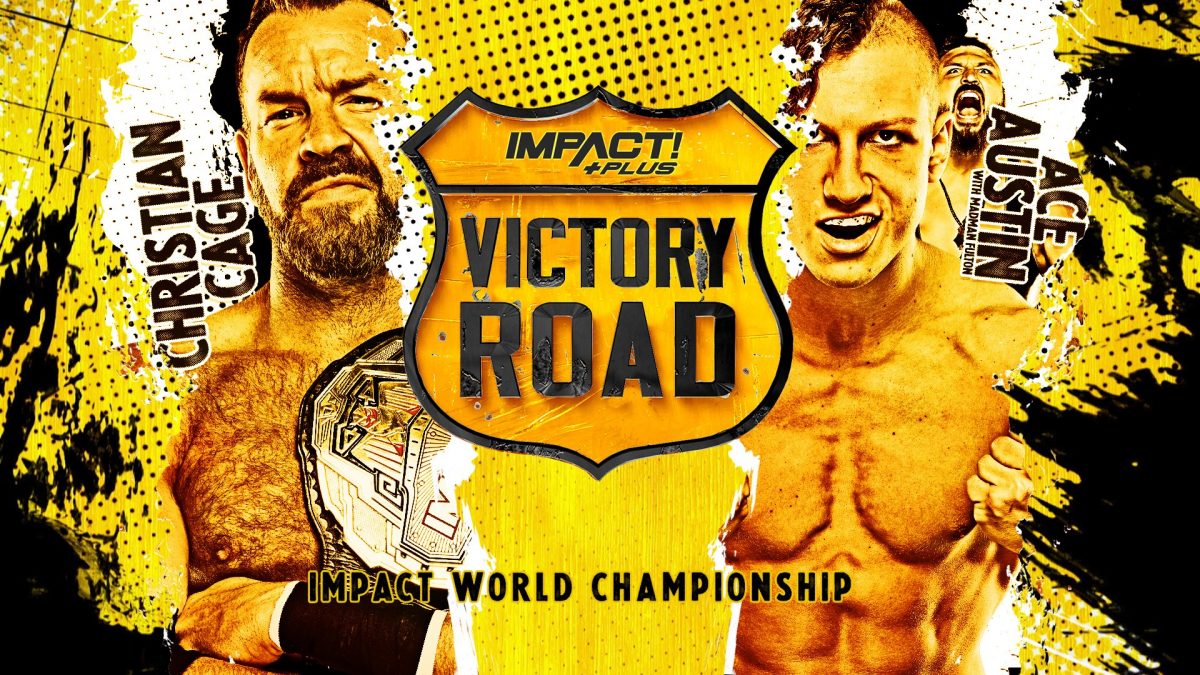 The issues between these three men have reached their boiling point! Petey dropkicks Maclin, followed by a springboard crossbody from TJP. Petey is the next to fly, diving into both men on the floor. Maclin takes TJP to the top of the stage and connects with a vicious backbreaker. Maclin hangs up both of his opponents in the corner, then hits a running shoulder tackle for two. Petey hits a slingshot Hurricanrana on Maclin, followed by a springboard Codebreaker. All three competitors are down after a wild flurry of offense. TJP hits Maclin with the Detonation Kick. Petey hits TJP with the Canadian Destroyer.

Maclin hits TJP with Mayhem For All for three.

Five-Way Match
Black Taurus vs. John Skyler vs. Jake Something vs. Laredo Kid vs. Trey Miguel

Buckle up for what will certainly be an action-packed five-way match! The first man to score a pinfall or submission will be declared the winner. The action is fast and furious from the opening bell as Jake takes out Taurus, Skyler and Trey with a big running crossbody. Laredo hits a springboard dropkick, sending Jake to the outside. Trey matches the speed of Laredo, connecting with a double foot stomp. Laredo hits his signature spear on Trey. Trey hits Jake with a top rope Meteora, causing him to DDT Laredo.

Taurus spears Jake, followed by a crucifix bomb to Laredo. Skyler hits a double spear to both Trey and Taurus. Laredo hits Skyler with the belly-to-belly Moonsault off the top rope to win.

Taylor Wilde gets her hands on Tenille Dashwood in singles action tonight! Kaleb With a K hooks Taylor’s leg from ringside, allowing Dashwood to capitalize off the distraction. Moments later, Madison chokes her on the ropes while the referee’s back is turned. Dashwood begins to wear her down with a series of submissions. Kaleb gets up on the apron and the referee has seen enough. Jordynne gets physical with Madison at ringside, causing the referee to eject everyone from ringside! Taylor hits a tilt-a-whirl backbreaker for two. Taylor avoids the Spotlight Kick, then hits her signature German suplex to win.

Gia Miller interviews arch-rivals Eddie Edwards and Sami Callihan before they team up against Moose and W. Morrissey tonight. Eddie says that he’s teaming with Callihan tonight not because he wants to but because it’s what he needs to do in order to take out the powerful alliance of Moose and Morrissey. Alisha tells Eddie that she doesn’t trust Callihan and wants to be at ringside tonight.

Anything goes in this personal grudge match with no disqualifications! Cardona blindsides Rohit during his entrance and it’s on! Cardona quickly falls victim to the numbers game as Shera gets involved. Shera hits Cardona with a vicious chokeslam backbreaker before leaving ringside to have Rohit finish the job. Rohit drives Cardona throat-first into a steel chair. Rohit continues the assault as he hits a running cannonball into a steel chair. Turnabout is fair play as Cardona turns the tide, hitting a Broski Boot into a steel chair. Cardona hits a cutter onto a trash can. Rohit double foot stomps Cardona into two chairs for a very close near fall. Cardona goes low, then hits Radio Silence but Shera breaks the pin. Cardona takes out Shera with Radio Silence on the ramp. Moments later, Chelsea Green returns from injury and attacks Rohit. Cardona capitalizes with Radio Silence on Rohit to win.

The war between Bullet Club and FinJuice continues tonight at Victory Road! The Bullet Club targets the injured leg of Juice as they cut off the ring and prevent him from making the tag. Moments later, Juice creates separation and makes the tag to Finlay. The pace quickens as Finlay comes in like a house of fire. Hikuleo shuts him down with a thunderous powerslam. Bullet Club now employs the same strategy on Juice, cutting off the ring and beginning the wear down process. Hikuleo hits Finlay with an impressive delayed vertical suplex.

Juice connects with a back body drop on Bey, followed by a DDT for two. Juice takes out Hikuleo with a slingshot crossbody on the floor. Bey takes a steel chair to the injured leg of Juice. Hikuleo capitalizes with a massive sitdown slam to pick up the victory.

Arch-rivals Sami Callihan and Eddie Edwards join forces against a common enemy, the unstoppable alliance of Moose and W. Morrissey! Callihan and Eddie work well together in the early going but Morrissey brings their momentum to a halt with a double chokeslam. Morrissey sends Eddie toppling all the way to the floor with a big boot off the top. After several minutes of domination from Morrissey, Eddie hits a Blue Thunder Bomb to create separation and make the tag to Callihan. Moose gets taken off the top with a Death Valley Driver for two. Moose then takes Callihan off the top with Go To Hell for a near fall of his own. Moose soars through the air, hitting a massive Superplex on Eddie. Callihan and Eddie show off their tandem offense but it’s not enough to keep Moose down for three. Moose pries Eddie’s kendo stick out of Alisha’s hands but Eddie avoids the incoming shot. Eddie takes a page out of Callihan’s playbook and hits a Piledriver. Morrissey picks up Alisha at ringside. The distraction allows Moose to capitalize with a spear to Eddie. Morrissey goes too far and powerbombs Alisha in the middle of the ring.

Concerned for the wellbeing of his wife, Eddie takes her to the back. Callihan must now fight Moose and Morrissey at a disadvantage. Moose hits him with the spear to win.

Despite being the rightful title-holders, Havok and Rosemary look to reclaim the Knockouts Tag Team Titles from Tasha Steelz and Savannah Evans tonight! Two powerful forces collide as Havok squares off with Savannah. Havok pummels her in the corner, then makes the tag to Rosemary who hits a running clothesline. Rosemary locks in Upside Down but Tasha blindsides her with a clothesline to turn the tide. Havok hits a big sitdown powerbomb on Tasha but Savannah breaks the pin attempt.

Rosemary sprays mist into the eyes of Savannah. Moments later, Havok tosses Tasha over the top rope, colliding with Savannah on the floor. Havok hits Tasha with the Tombstone Piledriver to retain the Knockouts Tag Team Titles.

Ace Austin previews his match against Christian Cage tonight and claims that becoming the youngest IMPACT World Champion in history is “Inevitable”.

Not only are Rich Swann and Willie Mack looking to become IMPACT World Tag Team Champions tonight but they’re also out for revenge! Rich and Willie take Gallows off his feet with a double dropkick. Gallows hits Rich with a pinpoint kick to the head. Anderson attacks Rich on the outside before throwing him back in for another big boot from Gallows. Gallows drops an elbow over the chest of Rich, then wears him down with a headlock. Willie quickens the pace, hitting Gallows with a Samoan Drop, followed by a pop-up forearm to Anderson. Willie’s adrenaline rush comes to an end when Anderson hits him with his signature spinebuster. Rich hits Anderson with a handspring cutter but Anderson comes right back with a Gun Stun.

Gallows powerbombs Rich on the hardest part of the ring. Back in the ring, Gallows hits Willie with the Gun Stun, followed by the Magic Killer to retain the IMPACT World Tag Team Titles.

Josh Alexander defends his X-Division Title against perhaps the greatest X-Division star of all time, Chris Sabin! It doesn’t take long for Sabin to fly as he hits a slingshot crossbody to the floor. Sabin jumps off the top but Alexander counters into a flapjack. Alexander locks in the Ankle Lock but Sabin wisely breaks free. Sabin rolls up Alexander for two but Alexander quickly shuts him back down with a forearm shot to the mat. Sabin avoids a top rope Moonsault, then hits a twisting neckbreaker on the floor. Sabin targets the neck of Alexander with a missile dropkick. Sabin locks in the Crossface but Alexander fights out of it. Sabin transitions into a pinning predicament for two. Alexander locks in another Ankle Lock but this time, he lays down for more pressure. Sabin counters, then superkicks his headgear off. Alexander comes back with the C4 Spike to retain the X-Division Title.

After the match, Sabin raises Alexander’s hand as he celebrates.

After the match, X-Division Champion Josh Alexander confronts IMPACT World Champion Christian Cage and reveals that he’ll be utilizing Option C to relinquish the X-Division Title for an IMPACT World Title shot at Bound For Glory!