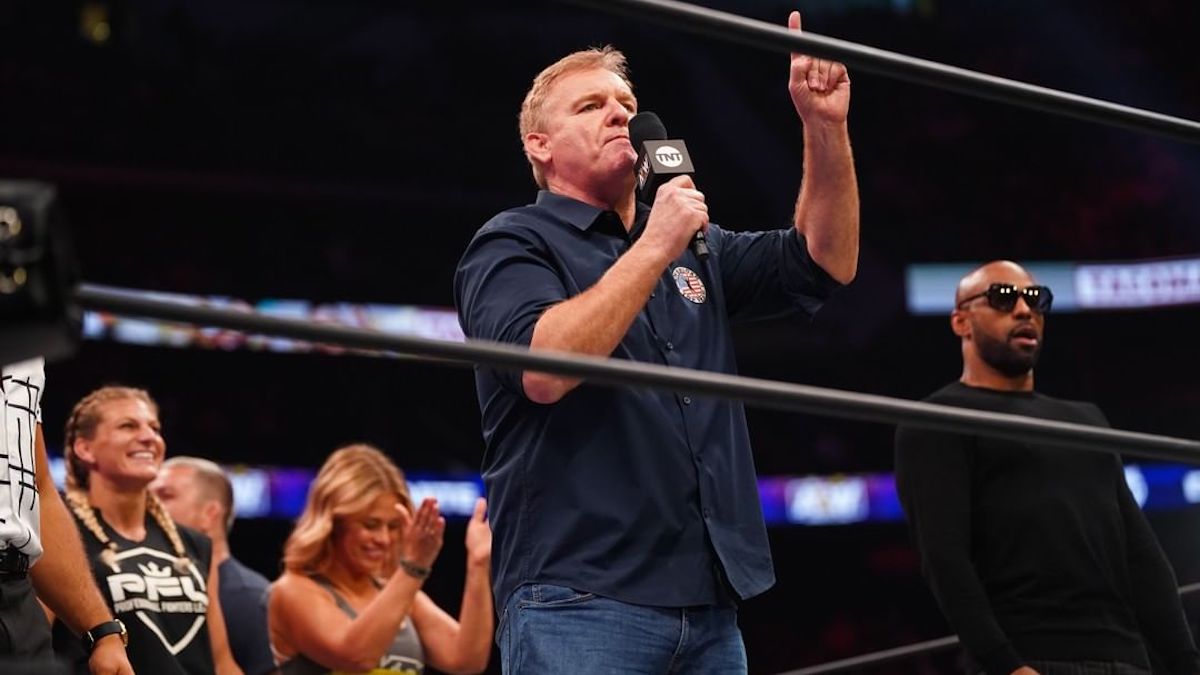 A recent episode of the SHAK Wrestling podcast had Dan Lambert as the guest. Some of the topics discussed included his promo work in AEW, the process that got him to work in the company, his thoughts about his current time in the company, and differences between AEW and WWE’s product.

On the topic of his promos in AEW, Lambert stated:

“The first time I walked in, I texted Tony [Khan] before I got there. I said, ‘Hey, I’m gonna say something like this’ and he texted me back and said, ‘Great,’ and then the second time he’s like, ‘You wanna come back?’ I’m like, ‘Yeah, I’ll come back’ and when I got there he’s like, ‘Hey, what are you gonna say?’ I said, ‘I’m gonna say something like this and this’ and [he] said, ‘Okay cool, but can you add this?’ ‘Yeah sure. Cool.’ So that’s pretty much been what it’s been like, and he’s obviously gonna have some creative control if I’m gonna do something that’s gonna be stupid or get somebody in trouble, although it might be fun to get cancelled. But, I don’t wanna cause him any headaches, but at some point that might happen.”

On the topic of the process of him working for AEW, Lambert stated:

“As far as how it came together, I just struck up a friendship with Tony Khan a couple years ago when he was down in Miami meeting with [Jorge] Masvidal about something and I got a phone call, I was at dinner down in Fort Lauderdale [Florida] and it was Malki Kawa who’s Jorge’s manager and he’s like, ‘Hey dude, I think you need to get down to Miami. I’m having a meeting with a guy. I think you guys were separated at birth. You might wanna come down.’ I’m like, ‘Huh?’ He’s like, ‘Yeah, you gotta come meet this guy.’ I’m like, ‘Who?’ He’s like, ‘Tony Khan.’ I said, ‘I’ll be there in 30 minutes.’ I hung up the phone, looked at my wife and said, ‘See ya. Get another ride home’ and I hauled ass. Went down there and hung out with them and Tony’s just a super cool dude. He’s a wrestling nerd like I am, which is kind of crazy because he’s younger and did not grow up watching the same stuff that I watched but he knows everything about it so he’s obviously gone back and re-watched it and we’re basically just friends and I used to go up and see some shows and he’d get me some good seats and he’s an MMA fan as well so we talk about things like that. Obviously he’s a bit of a football fan with his other ventures, I’m a football fan and when it came down to Miami, we were just talking. We were like, ‘Hey, maybe you wanna pop in and do a promo?’ ‘Yeah.’ Bring a couple fighters, have some fun. It was probably just gonna be a one-off in my opinion. So we did it and afterwards he texted me later that week, ‘Hey, you wanna come by next week?’ I was like, ‘Yeah, why not. Where you gonna be?’ So [it] just kind of worked like that.”

On the topic of his thoughts about his current time in AEW, Lambert stated:

“It’s fun as sh*t, you know? What am I gonna say? It’s a blast. You got 45 years of practicing in front of your bathroom mirror as a wrestling fan, yelling at everybody. I was always playing heel my whole life, I always liked the bad guys so, when you get a chance to do it and it reflects some of your own real feelings anyway, it’s even better.”

On the topic of the differences between AEW and WWE’s product, Lambert stated:

“I’d like to hope it’ll be back to the Monday Night Wars where everyone keeps stepping their product up to outdo the competition. Call me biased because I’m with AEW right now, but I don’t see WWE stepping their game up. Bobby Lashley is a real dear friend of mine. I love the guy. I’ve known him for 15+ years and I’m not even at the point where I’m fast-forwarding through Monday Night Raw to get to his shtick. I don’t even hit play. I’m not a big fan of WWE’s product these days. I still think they have some really good talents over there but I just have a hard time watching it.

The wrestling boom, in my mind, is what AEW is doing and watching their product and watching their show. Even though there are certain things in it that I don’t like. Some of the things I say in my character, I actually believe. But there are so many other things that they have. Talk about having a buffet of different genres of professional wrestling. You go to one show at AEW and see every style you like and a couple of other styles you don’t like. WWE is more of the same for me.

I see WWE as being somewhat egotistical in their approach that they are who they are and what they are,” he says. “They don’t have to change anything or do anything differently and people are still going to watch. I think it’s had a little bit of an opposite effect because I think a lot of people support AEW just because they want to stick their finger in the eye of a WWE that’s run roughshod for all of these years.”