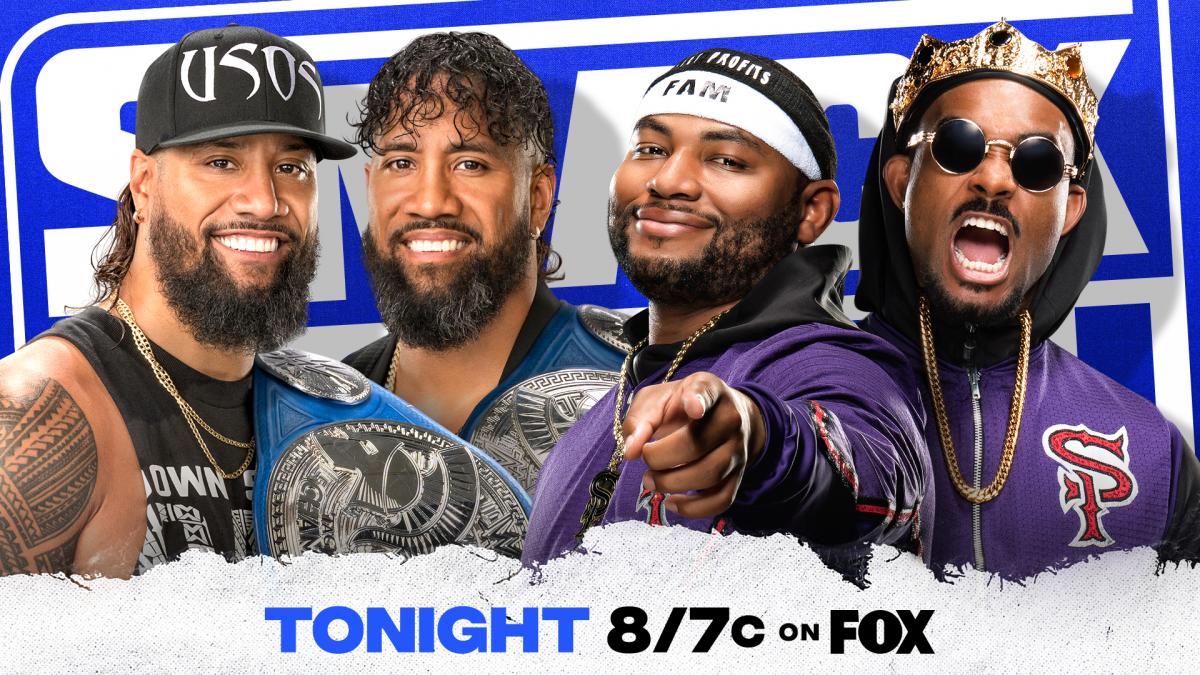 WWE pays tribute to the thousands of Americans who lost their lives in an unspeakable attack; A video package about the 2001 September 11 attack is shown. Tomorrow marks 20 years since the horrific attack.

The Head of the Table, WWE Universal Champion, Roman Reigns comes out with Paul Heyman and the WWE Smackdown tag team champions, The Usos.

Roman starts on the mic, “When it comes to sports entertainment, New York City runs it. And who runs WWE?” Heyman says “You run WWE.”

Brock Lesnar’s music hits and he comes out.

Lesnar gets in their face. Heyman tried to diffuse the situation. He asked Brock “Of all the championships we can go after together, why the Universal title?”

Lesnar asks Heyman, “Why didn’t you tell Roman I was going to me at Summerslam?”

Reigns and the Usos leave the ring. Heyman is left alone with Lesnar. Heyman says “Ladies and gentlemen…. for 20 years I was the advocate for Brock Lesnar.”

Brock pretended to be all happy, then he tells Heyman “Before Roman Reigns fires you, please accept my challenge.” Heyman asks what challenge. Brock says “my challenge for the Universal championship”. Heyman has five seconds to answer. 5,4,3,2 and he picks up Heyman for the F5. Reigns runs back to make the save with the Superman punch. Brock picks up Reigns for the F5, then the Usos jump in. Heyman takes them out. Reigns and Heyman get out of the ring while Lesnar is standing staring them down.

After commercials, Paul Heyman was being interviewed backstage. He said that Brock accused him of knowing he was going to be at SummerSlam. The Tribal Chief will answer Brock Lesnar’s challenge when the Tribal Chief is ready to and leaves the interview.

A minute into the match, they go to a commercial break.

Back from commercial and tags are coming in and out. Roode and Mysterio are left. Zayn trios Mysterio and Young gets involved and chokes Mysterio on the ropes. The referee sees him and kicks him out.

Adam Pearce and Sonya DeVille are in the ring with the contract.

Bianca said that she respected Becky because she thought that she would never back down from a fight, but she has been shamed. Now she doesn’t respect Becky like she used to.
She said that “Becky can win back some of my respect, like I will win back my championship.” Becky signs the contract.

Becky Lynch’s music hits and she makes her way to the ring.

Becky said “The original WrestleMania main event has arrived.” Becky goes on to say that she can be a fan (referring to Bianca) or she can be the man. Becky says “What if I don’t sign this?” Becky is told by Sonya and Adam to sign the contract, followed by Bianca saying “Sign it” many times.

Becky lashes out at the fans saying they use to chant “Becky”, and the fact that she came back and beat the champion in 26 seconds. She goes on to say that she left her baby at home and came back for the fans…. Becky finally signs the contract and throws it at Bianca, Bianca catches it. Becky leaves the ring.

Kayla Braxton annoys Paul Heyman backstage and asks him if he has an answer for the challenge. Heyman responds by saying that once Roman Reigns finishes watching The Usos successfully defend the Smackdown tag titles tonight, then he will give his answer. Heyman then goes on to say that it doesn’t mean that he will accept. Big E gets in Paul’s face. Interview is over.

They lock up. Arm bar by Edge, Seth counters and snaps Edge’s left arm. They lock up again, headlock by Edge and takes down Rollins. Back and forth match. Drop toe hold on Rollins into the second turnbuckle. He then sends Rollins shoulder first into the ring post.

Rollins back in control and drives Edge to the outside. Rollins runs and jumps on Edge on the outside of the ring.

Rollins is doing a number on Edge. Rollins delivers two grand slams and Edge had kicked out. Edge delivers a pedigree on Rollins and covers, 1,2 but Rollins kicked out. Rollins is on the outside, Edge goes on the top rope and lands on Rollins. Match is heating up.

Both men are exchanging spots. Rollins is down, Edge goes on the top rope, Rollins jumps up too and attempts a superplex, but Edge pushes him down. Edge jumps down and they continue their fight on the mat. Edge applies the crossface, but Rollins gets to the ropes. Edge goes for the spear, but Rollins counters into a reverse neck breaker. Seth was going for the stomp, but Edge counters into a sitout powerbomb, 1,2 but Rollins kicked out. Both men are on the ropes, Rollins delivers a buckle bomb. Spots exchanged again. Edge delivers the spear, 1,2 but Rollins kicked out.

Rollins looked stunned and worried. Referee calls for the stretcher. (Part of the show of course)

After a brutal matchup with @wwerollins, @edgeratedr is wheeled out of @TheGarden in a stretcher. #SmackDown pic.twitter.com/wUvjvq61ir

After commercials, they showed Edge being stretchered out backstage in an ambulance. Highlights of the ending of the match were shown again.

Seth Rollins was interviewed about the match backstage. Seth Rollins was shown almost speechless. He said “I am not sure how I am suppose to feel. Maybe I don’t feel anything at all.”

Roman Reigns and the Usos were shown backstage talking. The Usos leave to the ring as the Smackdown tag team title match is next.

Roman says to Paul Heyman “I saved you.” He then asks Heyman “Why didn’t you tell me that Brock was at SummerSlam?” Heyman was quiet.

Ford drop kicks Jimmy, then knocks Jay off the apron. Ford goes to the outside after Jay. Jimmy with a suicide dive to the outside.

Street Profits are double teaming Jimmy Uso. Jimmy tags in Jay. Dawkins delivers a drop kick. Works on Jay’s arm. Jay counters and knocks him down. Jimmy gets the tag. Double team on Angelo. Jimmy covers, 1,2 but Angelo kicked out. Jay gets the tag back. Missed a leg drop. Both Usos are thrown to the outside. Ford jumps over the top rope and lands on the Usos.

Roman Reigns makes his way out.

Back from commercial. Reigns is at ringside looking over the match.

Crossbody by Ford on Jimmy Uso. Ford delivers a couple of moves on Jimmy. Dawkins gets the tag. Dawkins in control and knocks Jay off the apron. Jimmy delivers a super kick, 1,2 but Dawkins kicked out. Usos did a number on Dawkins. Jay does the splash, 1,2 but he kicked out again. Jimmy tags himself in. Ford is in control, then Reigns interferes and chokes him out. Referee calls for the bell.

Winners: By disqualification, The Street Profits

Paul Heyman hands Reigns the microphone. Roman says that he will smash Lesnar as soon as he gets done smashing Finn Balor. Challenge was accepted by Roman Reigns.

Lights go out and Finn Balor comes out as The Demon. Balor gets in the ring and confronts Roman Reigns as the show goes off the air.